The Year 1993 From The People History

What Events Happened in 1993

United States President George H.W. Bush and Russian President Boris Yeltsin sign the START II (Strategic Arms Reduction Treaty) on January 3. The purpose of the treaty was to ban the use of MIRVs (Multiple Independently Targetable Reentry Vehicles) on ICBMs (Intercontinental Ballistic Missiles) which encouraged first-strike strategies. The U.S. Senate ratified the treaty in 1996 and Russia ratified it in 2000, but it never came into effect as Russia withdrew in 2002 after the U.S. withdrew from the ABM (Anti-Ballistic Missile) Treaty. The agreement was replaced by the SORT (Strategic Offensive Reductions) Treaty which mandated both the U.S. and Russia reduce their nuclear arsenals to between 1,700 and 2,000 warheads each.

More Information and Timeline for the Waco siege


1. February 28th 9:45 am The 76 ATF agents attempted to execute their search and arrest warrants for Koresh and specific followers on weapons charges on Sunday morning <

3. 11:30 am Sheriffs Lt. Lynch of the McLennan County Sheriff Dept. contacted the ATF and negotiated a ceasefire. The Branch Davidians allowed the ATF dead and wounded to be evacuated and held their fire during the ATF retreat. <

4. 19:30 David Koresh is interviewed by CNN. The FBI instructs CNN not to conduct further interviews. <

5. Koresh talks for about 20 minutes on KRLD Radio In Dallas, describing his beliefs and saying he is the most seriously wounded of the Branch Davidians. <

6. Jeff Jamar, head of the FBI's San Antonio field office takes command soon after as a result of the deaths of federal agents, placed in charge of the siege as Site Commander <

8. The FBI cut Davidian communication to the outside world stopping Koresh from giving phone interviews with local news media <

9. The siege lasted 51 days with a team of 25 FBI negotiators who managed to facilitate the release of 19 children, ranging in age from five months to 12 years old, <

10. The children were interviewed by the FBI and Texas Rangers, Allegedly, the children had been physically and sexually abused long before the standoff. This was the key justification offered by the FBI (both to President Bill Clinton and to Attorney General Janet Reno) for launching tear gas attacks on the compound to force the Branch Davidians out. <

11. 98 people remained in the building including 23 children<

12. The FBI cut all power and water to the compound, forcing those inside to survive on rain water and stockpiled military MRE rations<

13. U.S. Attorney General Janet Reno approved recommendations by the FBI to mount an assault, after being told that conditions were deteriorating and that children were being abused inside the compound<

14. 5:55 AM April 19 FBI Hostage Rescue Team deploys two armored CEVs to the buildings. CEV1 goes to the left of the buildings, CEV2 to the right.<

16. 6:31 AM The entire building is filled with tear gas and the FBI fires additional plastic, nonincendiary tear gas rounds through windows<

17. 7:58 AM CEV2, with battering ram, rips hole into second floor of compound and then minutes later another hole is punched into the backside of one of the buildings of the compound<

18. 10:00 AM A man is seen waving a white flag on the southeast side of the compound. He is advised over loudspeakers that if he is surrendering he should come out. He does not. At the same time, a man believed to be Schneider comes out from the remains of the front door to retrieve the phone and phone line.

19. 12:07 AM A man is seen waving a white flag on the southeast side of the compound. He is advised over loudspeakers that if he is surrendering he should come out. He does not. At the same time, a man believed to be Schneider comes out from the remains of the front door to retrieve the phone and phone line.

21. 12:30 AM Part of the roof collapses. Around this time, there are several further explosions and witnesses report the sound of gunfire, attributed by the FBI to live ammunition cooking off throughout the buildings because of fire.

22. 76 Branch Davidians died and nine survived the fire on April 19

From FBI recordings and observations it is believed that the Branch Davidians set fires and intended to die rather than be arrested and jailed. After multiple reports and investigation of the incedent Special Counsel Danforth concluded that the allegations by Branch Davidian survivors and relatives that the fire was started by the FBI were meritless.

NASA loses contact with the Mars Observer spacecraft during August, bringing an end to the mission. The Mars Observer spacecraft was a robotic space probe that had been launched during September of the previous year with the mission of studying the surface of the red planet, its atmosphere, climate, and the surrounding magnetic field. Contact with the probe was lost just before it was supposed to enter the orbit of Mars, so the mission effectively failed as it was unable to complete any of its mission objectives in respect to observing the planet. The development and launch of the spacecraft cost $980 million.

2 examples from Childrens Toys From The 1993 Page 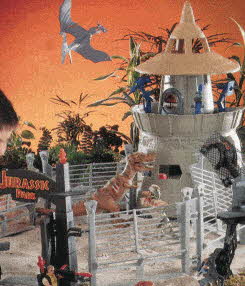 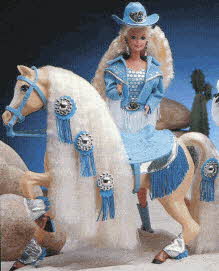 Western Barbie and Western Star Horse
Manufacturer: Mattel
Price: $15.50 for Barbie, $25.59 for Horse
Description Western Barbie has rolling stampers attached to her cowboy boots. With ink pad and glitter to create your own designs. Western Star Horse is a Palomino horse with magical stamping hooves that leave a trail of horseshoes and stars wherever she goes. She has a shimmering mane and tail that you can comb and decorate. Riding pants for Barbie, ink pad and hoof covers are included.

NASA’s STS-55 Space Shuttle mission comes to an end during May when the crew returned safely to Earth. During the mission, the Space Shuttle Columbia carried a crew of seven into space to conduct several experiments during orbit. The crew’s commander was Steven R. Nagel and the pilot was Terence T. Henricks. The mission carried the German Spacelab module and the crew performed about 88 experiments while in orbit. The mission was considered an overall success despite a few minor issues leading up the the launch and while in space.

2. Campbell made her bid for leadership of the Progressive Conservative Party following the announcement of former Prime Minister Brian Mulroney's retirement in February of 1993.

3. She faced her first federal election on October 25 News Events, where the Progressive Conservative Party was defeated in a landslide election in favor of the Liberal Party with Jean Chretien as the leader.

4. While Campbell was considered popular during her short time as the Prime Minister, her predecessor’s unpopularity and her own frankness about the economy worked against her.

Nelson Mandela and F.W. de Klerk were awarded the Nobel Peace Prize during October of 1993. The two leaders were recognized for their successful efforts to end apartheid in South Africa and usher in a new era of fully representative democracy in the country. F.W. de Klerk was the President of South Africa from 1989 to 1994 and oversaw the dismantling of apartheid. Nelson Mandela was the President of South Africa from 1994 to 1999, the leader of the African National Congress party, and an advocate for racial equality and reconciliation in the nation.

More Information and Timeline for the Hubble Telescope Repair.

The Space Shuttle Endeavour launches on December 2nd of 1993 to complete its fifth mission. Its mission objective was to install COSTAR (Corrective Optics Space Telescope Axial Replacement) on the Hubble Space Telescope to correct a flaw on a Mirror that had been causing some images to be out of focus. There were seven crew members and they conducted a record of five space walks to repair the telescope. The mission lasted until December 12th of 1993 and the crew was successful in installing COSTAR and adding some new instruments to the Hubble Space Telescope. Hubble had been originally placed into space on April 24th of 1990 and remains in operation.

More Information and Timeline for STS-57.

NASA’s STS-57 space mission successfully returned to Earth in July of 1993 after spending 9 days, 23 hours, 44 minutes, 54 seconds in space. The mission carried the six crew members Ronald Grabe, Brian Duffy, G. David Low, Nancy Sherlock, Peter Wisoff, and Janice Voss aboard the Space Shuttle Endeavour. The mission was important in that it marked the first flight of pressurized lab, SPACEHAB, a commercially created laboratory, they also carried and conducted 22 experiments. The crew also captured the over 9,000 pound European Retrievable Carrier, an experiment carrying satellite that had been in space for about a year. Overall, the mission was successful in completing its objectives and returned home safely.

Other Major Events From 1993

Severe Blizzard strikes the eastern U.S., bringing record snowfall and other severe weather all the way from Cuba to Québec

A magnitude 7.8 earthquake off Hokkaido, Japan launches a devastating tsunami, killing 202 on the small island of Okushiri, Hokkaido

The Oil tanker MV Braer carrying 85,000 tonnes of crude oil runs aground on January 5th in hurricane force winds off the Shetland Islands and large amounts of crude oil spill into the North Sea causing an ecological disaster in the area.

Fighting occurs between Muslims and Croats in Bosnia

In the United Kingdom, 11-year-olds Robert Thompson and Jon Venables are convicted of the child murder of 2-year-old James Bulger of Liverpool

A report states 2.5 million people in Europe are homeless

Buckingham Palace opens its doors to the public

An anti-abortion activist murders a doctor outside an abortion clinic

Ben Johnson, is banned from athletics for life

The US and Soviet Union sign Start II reducing nuclear warheads by 3,500 each

The tennis player Monica Seles is stabbed by a spectator during a quarter final tennis match in Hamburg by Günter Parche, an obsessed fan of Steffi Graf

The Pentium microprocessor introduced by Intel.

The World Wide Web was born at CERN

The Debian GNU/Linux distribution is founded by Ian Murdock.

The first cloning of a Human Embryo by 2 American Scientists.

In the Line of Fire

Rage Against the Machine

Rod Stewart with Have I told You Lately

Whitney Houston with I Will Always Love You 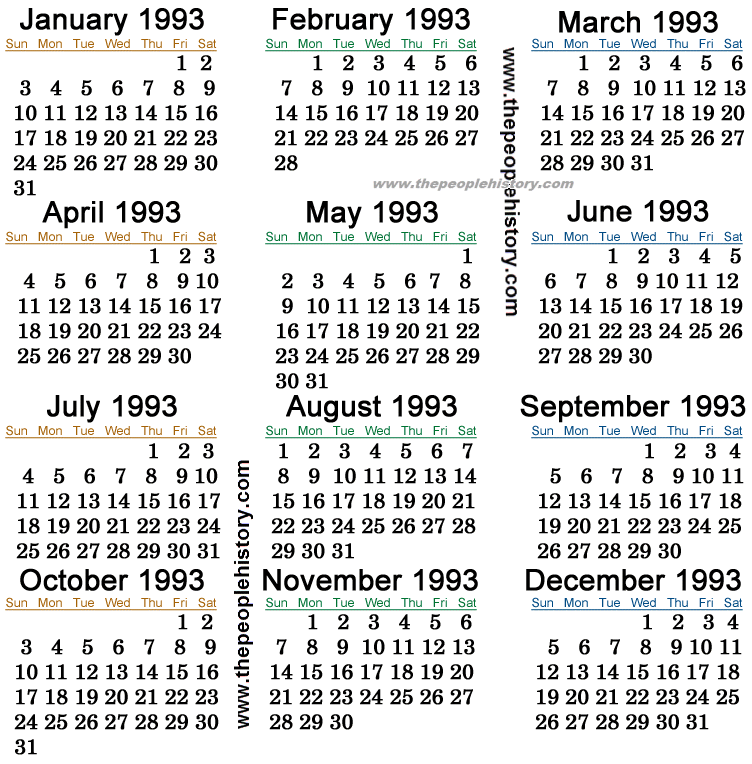