The Year 1994 From The People History

>What happened in 1994 Major News Stories include Northridge Earthquake San Fernando Valley, Channel Tunnel opens, Michael Jackson marries Lisa Marie Presley, Nelson Mandella becomes president of South Africa, Estonia sinks in the Baltic sea, First Satellite Digital Television Service Launched, Civil War in Rwanda. After many years the English Channel is opened joining England to France for the first time, this year also marks the 50th Anniversary of the Allied landings in France and the beginning of the end of the Second World War. Tensions start over Inspection of Nuclear Plants in North Korea. Rover in the UK is purchased by BMW. In the US the First Genetically Engineered Tomatoes become available and the use and sale of GM Foods is approved

What Events Happened in 1994

Tonya Harding wins the national Figure Skating championship title but is stripped of her title following an attack on her rival Nancy Kerrigan.

More Information and Timeline for the attack on Nancy Kerrigan.

Figure skater Nancy Kerrigan was suddenly attacked in Detroit, Michigan on January 6, 1994 after her skating practice. She was hit in the right knee but, fortunately, it was not fractured. It was going to be nearly impossible for Kerrigan to complete the U.S. Figure Skating Championships, which were held during this week. Four men, including the ex-husband of Kerrigan's rival, Tonya Harding, were later sentenced to prison for the assault. Harding denied involvement.

The full version of Netscape Navigator was released during December of 1994 and it was considered the first commercially successful web browser. It quickly became the leading web browser in the market and was offered for free to non-commercial users such as schools and non-profit organizations. Netscape Navigator’s popularity eventually declined during the late 1990s as Microsoft continued to improve and promote their own Internet Explorer web browser. Netscape eventually released their code under an open-source license where it was used for the creation of Mozilla Firefox. Support for it ended in 2008.

1. South Africa holds its first multi-racial elections after the end of apartheid during April News Events.

2. The election was conducted by the Independent Electoral Commission, which later became a permanent part of South African elections after 1996 .

3. The African National Congress party won a majority of the votes with about 62 percent.

4. The party leader was anti-apartheid activist Nelson Mandela, who was appointed president the following month.

5. There was nearly 87 percent turnout with over 19 million ballots cast.

More Information and Timeline for the 1994 FIFA World Cup

The FIFA World Cup for soccer begins on June 17th, 1994 and lasts until July 17th. It is held in the United States for the first time in the competition’s history and matches take place in nine different cities across the country. The cities include Pasadena, Pontiac, Stanford, East Rutherford, Chicago, Dallas, Foxborough, Orlando, and Washington, D.C. There were a total of 52 games held throughout the tournament and at the end of it Brazil defeated Italy to win the title. The USA World Cup was recorded as one of the highest attended in history, and it was thought to have influenced a surge in the popularity of soccer in the United States, especially since the United States Team made it to the round of 16 for the first time since 1930.

Sweden and Norway vote on whether or not to join the European Union.

More Information for Sweden and Norway in the European Union.

Citizens in both Sweden and Norway voted on whether or not to join the European Union during November of 1994. The two Scandinavian countries held public referendums on the issue only one month after their neighbor Finland did the same. In Sweden, the vote came out to fifty-two percent in favor of joining the EU with an eighty-three percent voter turnout. While in Norway, fifty-two percent of voters stated they were against joining the EU with an eighty-nine percent voter turnout.

2 examples from Childrens Toys From The 1994 Page 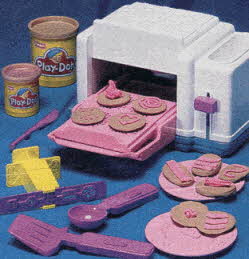 Play-Doh Cookie Lovin' Oven
Manufacturer: Play-Doh
Price: $19.99
Description Kids can scoop Play-Doh into the cookie molds on cookie sheet, put the tray in the oven, and set the timer. Bell goes off in seconds and cookies are "done." Set includes oven, two plates, scoop, spatula, knife and extruder with rail. 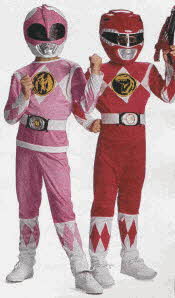 Other Major Events From 1994

Channel Tunnel opened on May 6th between England and France

Haiti invaded by US democracy restored

50th Anniversary of the Allied landings

48 members of the Order of the Solar Tradition Cult commit suicide to escape the hypocrisies and oppression of this world.

The Seongsu suspension bridge over the Han River in Seoul collapses killing 32.

The New UK Lottery Introduced with an estimated jackpot of £7m

Frederick West serial killer together with his wife Rosemary West, was responsible for the murder of at least twelve young women

Jordan and Israel sign a peace treaty ending state of war that has existed between the nations since 1948.

Norwegian voters Vote No To Joining The European Union

A New Outbreak of the deadly Ebola virus begins on May 9th in Zaire which continues in 1995 ( highest case fatality rates of any human pathogenic virus, roughly 90%. )

The Winter Olympic Games are held in Lillehammer, Norway

The Channel Tunnel, which took 15,000 workers over seven years to complete, and is 31 miles long joining France and England opens on 6th May

Four Weddings and a Funeral

Sheryl Crow with All I Wanna Do

Celine Dion with Power of Love

The Late Show with David Letterman 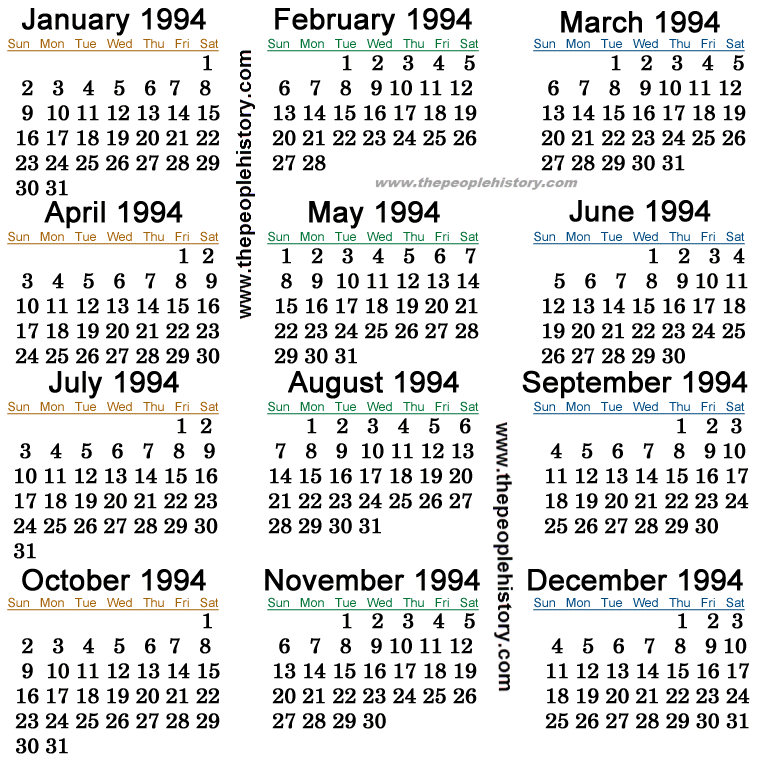