Important Events From This day in History January 3rd

1969 - John Lennon album Two Virgins
1969 : A new album by John Lennon called Two Virgins featuring John Lennon and Yoko Ono in the nude are confiscated at Newark Airport and are not allowed to be sold in the US , also vice squad officers closed down a record store in Chicago displaying the Album due to it being considered pornographic.

1870 - Brooklyn Bridge
Construction work begins on the Brooklyn Bridge one of the oldest suspension bridges in the United States connecting the boroughs of Manhattan and Brooklyn by spanning the East River. 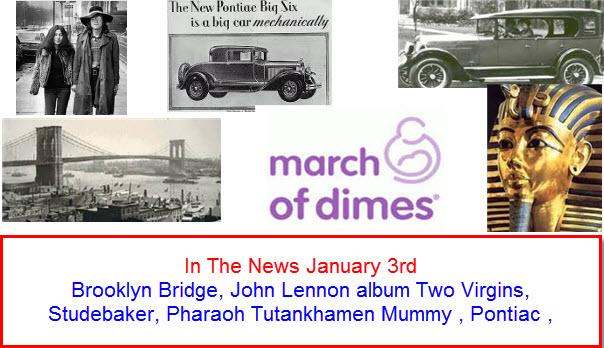 1924 - Pharaoh Tutankhamen Mummy Located
A precious treasure was found located near Luxor, Egypt, where King Tut's tomb was discovered two years prior. This special object was a stone sarcophagus, which contained a mummy inside of Pharaoh Tutankhamen of Egypt.

1926 - Pontiac Introduced
1926 : This was the day that the General Motors introduced a new make of car to the market. It was called the Pontiac. Numerous models of this vehicle are still driven today.

1940 - Southland Shuffle
Charlie Barnet and his Orchestra records the would-be hit "Southland Shuffle" for Bluebird Records. The famed Billy May was featured as the trumpet player on the album

1949 - Closed Shop Outlawed
The Supreme Court ruled that states held the right to outlaw the closed shop, this was one of the most important laws passed re: labor Law and changed the balance of power between labor and Business

1961 - U.S.A. Cuba Relationship
The relationship between United States and Cuba rapidly deteriorated and President Dwight D. Eisenhower closed the American Embassy that was located in Havana, Cuba. No longer did the United States and Cuba have diplomatic relations.
The primary reason why the United States had pulled out of Cuba at this time was to take a stand against the regime of Fidel Castro. The U.S. government was very concerned that this communist movement could spread to western countries such as the U.S.A. (or Canada, or others).
The decline of peace between U.S. and Cuba had actually started since 1959. This was when Castro first stepped into office.

1962 - Cuba
Prime Minister , the leader of Cuba at this time, was excommunicated from the Catholic Church. Other official leaders of Cuba's communist regime of this time were thrown out as well. He was thrown out for violating a large number of the Roman Catholic Church's Code of Canon Law.

1965 - Vietnam War
Thousands of antigovernment demonstrators in Saigon clash with government marines and police over concern that American influence in South Vietnam was increasing.

1967 - Jack Ruby Dies
Jack Ruby, John F. Kennedy's accused killer dies in Parkland Hospital in Dallas, Texas. This is the same hospital where John F. Kennedy and Oswald had been pronounced dead.
It was reported that Jack Ruby had died of cancer which had spread to his lymph glands, lungs, and pancreas. Even until up to his death he had denied having any connection with the JFK conspiracy-and very strongly insisted that he had nothing to do with it.
It is also reported that Jack Ruby was the one who was allegedly responsible for Oswald Chamber's death. It was believed at this time that the reason that Chambers "had to go" too was to "keep him quiet".

1990 - Matthew Stuart
1990 : Matthew Stuart said his brother Charles was the one who killed Carol Stuart, who was Charles' wife. Charles had fled when he found out his brother Matthew was going to testify against him. He had ended up taking his own life while driving over the Mystic River.
Originally William Bennett, an ex-con was charged of the murder as a result of a joke cracked by his nephew. Later Bennett was released.

1993 - Start II
US President George Bush, and Russian Boris Yeltsin, have signed the second Strategic Arms Reduction Treaty Start II - in Moscow which will cut the number of nuclear warheads they have by between 3,000 and 3,500. ( currently both have about 10,000 nuclear war heads each )

1999 - U.S. Midwest blizzards
One of the worst blizzards ever took place in the Midwestern United States leaving 14 inches in Milwaukee and 19 inches in Chicago. People had to dig themselves out of this storm after suffering the affects heavy wind and snow. This storm lasted for three days and 100 people had died.

2008 - Oil Breaks the $100 a Barrel
2008 : After a few months with the price of oil flirting with the $100 per Barrel it has finally broken the barrier and is expected to increase further now the physiological price barrier is broken

2008 - Polar Bear and Oil Exploration
As the arguments continue over the long term future of the Polar Bear specifically if it should be listed as a threatened species. The U.S. federal Minerals Management Service has announced it will hold a lease sale for exploration rights for oil and gas in a north-western region of Alaska which include sectors of the Chukchi Sea. The Chukchi Sea is home to one of two populations of polar bears in the US and environmental groups fear the effects on wildlife in the region, including the polar bear population.

2010 - Beijing Heavy Snow Storm
2010 : Heavy snow blankets the Chinese capital Beijing, closing most highways out of the city were and all domestic flights out of Beijing.

2010 - Embassies are closed in Sanaa
The United States has been told that al-Qaeda will be making attacks in the Yemeni capital Sanaa, and the U.S. and U.K. have announced that their embassies have temporarily closed. The U.S. has accused an al-Qaeda affiliate of being behind the Christmas Day 2009 bombing attempt on a Detroit-bound airliner. Yemen has become a prominent al-Qaeda haven, and John Brennan has said that Western countries will have "to take every measure possible to ensure the safety of our diplomats and citizens abroad, so the decision was made to close the embassy." The next day France closes its Yemeni embassy as well

2011 - Australia Hit by Massive Flooding
The state of Queensland in Northeastern Australia experienced massive flooding, affecting over twenty towns and over 200,000 people.

2013 - French Basque Party Disbands
2013 : Batasuna, the Basque nationalist party has announce that it would shut down operation in the country of France. The party was banned from Spain in 2003.

Michael Schumacher
Born: 3rd January 1969 Hürth-Hermülheim, West Germany
Known For :
Michael Schumacher believed by many to the greatest Formula 1 racing driver of all times winning the Formula One world drivers championship 7 times 1994, 1995, 2000, 2001, 2002, 2003 and 2004, Twice for Benetton in 1994 and 1995 and the other five times for Scuderia Ferrari. He was at his best in wet conditions and is known as "Regenmeister" (rain master). There are rumors that he may come back to F1 in 2010 but no confirmation just speculation and maybe wishful thinking by spectators and pundits alike. A little known fact he is a strong supporter of good causes and following the 2004 Asian tsunami disaster he made a personal donation of US$10 million.

J. R. R. Tolkien
Born: 3rd January 1892 Bloemfontein, Orange Free State
Died: September 2nd 1973 Bournemouth, England
Known For : J. R. R. Tolkien was a South African Born Writer and poet who created the The Lord of the Rings Trilogy and The Hobbit considered by many to be the best fantasy literature ever written. Like many of the great writers of his time he was a Professor at Oxford University ,teaching first as a Professor of Anglo-Saxon and later a Professor of English Language and Literature. Now for a few things you may not know he also helped to translate the Jerusalem Bible. Another fact many may not know is he only wrote The Lord Of The Rings after the Hobbit gained a large audience and in total spent more than ten years writing the main stories and appendices for The Lord of the Rings.