What Happened 20 years ago in 2002 Major Events, Popular Culture, Prices

More Information for the US Airways Bankruptcy

The United States’ seventh largest airline, US Airways files for bankruptcy during August. While the airline had financial issues prior to the September 11th terror attacks, it had been disproportionately impacted as it had a large presence at the major airports in the Washington D.C. region. After declaring bankruptcy, a judge granted the corporation $75 million in emergency financing and $500 million in debtor financing. In 2004 , US Airways filed for bankruptcy again and it merged with America West in 2005 . In 2013 it merged with American Airlines and in 2015, American Airlines discontinued use of the US Airways brand name.

The XIX Winter Olympics were held in Salt Lake City, Utah during February. A total of 2,399 athletes from 77 different countries participated in 80 athletic events. Women’s bobsleigh was added as a new event and the skeleton event was re-introduced. It also marked the first time that a black athlete won a gold medal at the winter games with Vonetta Flowers (USA) in women’s bobsleigh and the first black male athlete won a winter gold with Jarome Iginla (Canada) in men’s ice hockey. Norway won the most gold medals and Germany, the United States, and Canada came in second, third and fourth.

The FIFA World Cup for soccer was held between May 31 and June 30th. The massive sporting event was hosted by South Korea and Japan, making it the first World Cup to be held in more than one nation. It was also the first time the World Cup was held somewhere other than Europe or the Americas. The team from Brazil defeated Germany to win the final, becoming the first team to win five World Cups as well as being the only team to win all of their matches.

In January of 2002, only a few months after the World Trade Center tragedy of September 11, 2001, United States President George W. Bush makes one of the most memorable State of the Union Addresses of any president. In his annual presidential speech he addressed the pressing problem of terrorism and the development of weapons used for mass destruction. During the speech he also describes "regimes that sponsor terror" as an Axis of Evil, in which he includes Iraq, Iran and North Korea. He outlined plans for combating terrorists such as Osama Bin Laden and the Taliban and urged for a greater focus on “Homeland Security.” This was his first public speech as President of the United States.

Former U.S. President Jimmy Carter was awarded the Nobel Peace Prize in October of 2002. Carter was given the prize for dedicating his life promoting peace and democracy, and working to advance human rights and social issues. Carter’s greatest achievement came in 1978 during his presidency when he brokered a peace deal between Egypt and Israel, but the majority of his work came after he left office. He was active in advocating for human rights and working as a mediator in international conflicts. He also established the Carter Center to fight against social and economic injustice and was heavily involved in the affordable home-building charity, Habitat for Humanity.

The European Union votes to add 10 new countries to the EU.

Queen Elizabeth, the Queen Mother of the UK Dies

No Child Left Behind Act

The No Child Left Behind Act is passed and President George W. Bush signs into law

The Basque terrorist organisation ETA continues it's bombing campaign in support of its aim for self determination for the Basque country.

The plan to create a single Nuclear Waste Dump in the United States at Yucca Mountain, Nevada to replace 130 separate dumps around the US is passed by the US Senate

The Lord of the Rings: The Two Towers

Harry Potter and the Chamber of Secrets

Mount Nyiragongo Volcano erupts in the Democratic Republic of the Congo displaces an estimated 400,000 people

Chechen Rebels take 800 theatergoers hostage in Moscow and threaten to blow up the theatre , 3 days later special forces storm the building resulting in the death of 128 hostages and 41 rebels

Leaders of the world's richest nations meeting at the G8 summit in Canada agree to help the poorest countries in the world by providing funding for economic and political development in Africa.

Forest fires in Colorado have destroyed nearly 100,000 acres of land making them the worst in the states history.

The Prestige oil tanker sinks polluting more than a thousand beaches on the Spanish and French coast.

Restrictions are further loosened for mercy killings and assisted suicide for patients with unbearable, terminal illness in the Netherlands.

East Timor Gains Independence From Indonesia on May 20

"Miss B" Granted Right To Die in Landmark British Case

A Suicide bomber blows himself up aboard a bus in Haifa 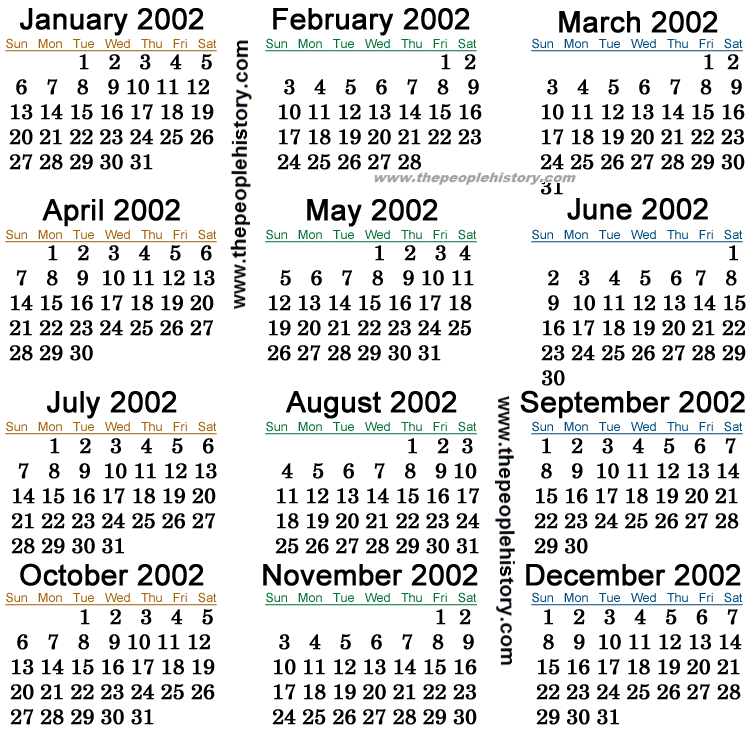