More Information for the Playstation 2.

During March of 2000, the newest Sony gaming console, the Playstation 2, was released for sale in Japan. The Playstation 2 went on to become the best selling gaming console in history, selling over 155 million units worldwide. Part of its success relied on the system’s backwards compatibility, allowing users to play games on the console from the previous model. The Playstation 2 was sold and manufactured around the world until January of 2013 when it was discontinued prior to the release of the Playstation 4, making it one of the longest sold systems.

The first crew to live on the International Space Station (ISS) arrives in space during November. The mission, called Expedition 1, was the first long-term stay totaling 136 days. Three astronauts including Bill Shepherd, Yuri Gidzenko, and Sergei Krikalev made up the crew of Expedition 1, and they stayed on the ISS for several months before being replaced by the crew of Expedition 2. Since the arrival of the first crew the International Space Station has been continuously occupied by astronauts from around the world.

1. In December of 2000, the U.S. Supreme Court rules to end the vote recount in Florida in the Bush v. Gore case, giving the presidency to George W. Bush after a prolonged legal battle following the election.

2. The results in Florida were so close that it triggered an automatic machine count of votes under Florida law, the results tightened the race showing that less than 600 votes separated the two candidates.

3. Gore pursued the option to have a manual recount in 4 counties.

4. They were not able to complete the manual recount in the days required by the law which led to a legal battle between Gore and the state of Florida which eventually made it to the U.S. Supreme Court.

5. The court ruled that the methods in the recount violated the 14th amendment and also ruled to end the recount.

The Tate Modern opens in London.

The Euro falls to record low against the US dollar

The new Millennium Bridge across the Thames is opens on June 10th and is closed on June 12th due to safety fears for modifications.

Concorde Air France Flight 4590 crashes just after takeoff from Paris killing all 109 aboard and 5 on the ground.

The Summer Olympics are held in Sydney, Australia.

1. The XXVII Summer Olympic Games in Sydney, Australia began during September of 2000.

2. A total of 10,651 athletes from 199 different countries participated in 300 events at the Millennium Olympic Games.

3. These were the first games to feature events in taekwondo and the triathlon, and the first to allow female athletes to compete in the modern pentathlon and weightlifting.

4. The XXVII Olympiad ended in October and the United States took home the most medals with 93 in total, ahead of Russia with 89, and China and Australia in third and fourth with 58 each.

Founder of Microsoft Bill Gates leaves his position as CEO.

Microsoft co-founder and creator of the modern PC Bill Gates left his position as the Chief Executive Officer of his company during January of 2000. Gates left his position in order to spend more time doing charity work with the “Bill and Melinda Gates Foundation” a private charity foundation that he and his wife created. Gates remained in his position as Chairman of Microsoft until 2014 and also became the Chief Software Architect until 2008. Steve Ballmer took over as CEO in 2000 and was then replaced by Satya Nadella in 2014.

2. It was an X5 level eruption and originated in the large sunspot group 9077 as recorded by the NOAA (National Oceanic and Atmospheric Administration).

3. It was the largest solar flare recorded since 1989 and it triggered an S3 radiation storm and geomagnetic superstorm.

4. The radiation began reaching Earth within 15 minutes, causing disruptions to satellites and exposing air travelers to radiation that was equal to that of a chest x-ray.

5. It also caused a coronal mass ejection which can create stronger and farther-reaching Northern Lights and Southern Lights.

The UK fuel protests take place, with refineries blockaded, and supply to the country's network of petrol stations halted

In Aden, Yemen, the USS Cole is badly damaged by two suicide bombers on October 12th

The last of the original Mini's rolls off the production lines

How the Grinch Stole Christmas!

California suffers the first of two years of Rolling Blackouts

The use of mobile phones continues to grow as mobile phones move from the percieved "Yuppie Device" to an essential consumer product.

President Robert Mugabe pressed on with his plan to remove Zimbabwe's farms from white ownership.

A fire at the Childers Palace Backpackers Hostel on June 23rd in the town of Childers, in Queensland, Australia leaves 15 backpackers dead

Mad Cow Disease causes alarm in Europe due to it's growth

Hillary Clinton is elected to the US Senate representing New York

An earthquake measuring 7.9 on the Richter scale strikes the western island of Sumatra, Indonesia on June 5th

An earthquake measuring 7.0 on the Richter scale strikes Baku the capital of Azerbaijan

U.S. presidential election, 2000 Republican challenger George W. Bush defeats Democrat Vice President Al Gore, but the final outcome is not known for over a month because of disputed votes in Florida.

The popular online community DeviantART is launched during August of 2000 by creators by Scott Jarkoff, Matt Stephens, and Angelo Sotira. The site, created to help users share and discuss their own artwork and the creations of others. Typically, the art featured on the site is non-traditional, and they showcase a variety of styles including photography, Flash animation, digital art, and much more. Over the years the website grew and boasts over 65 million visitors per month, over 38 million registered users, and over 160,000 uploads per day. 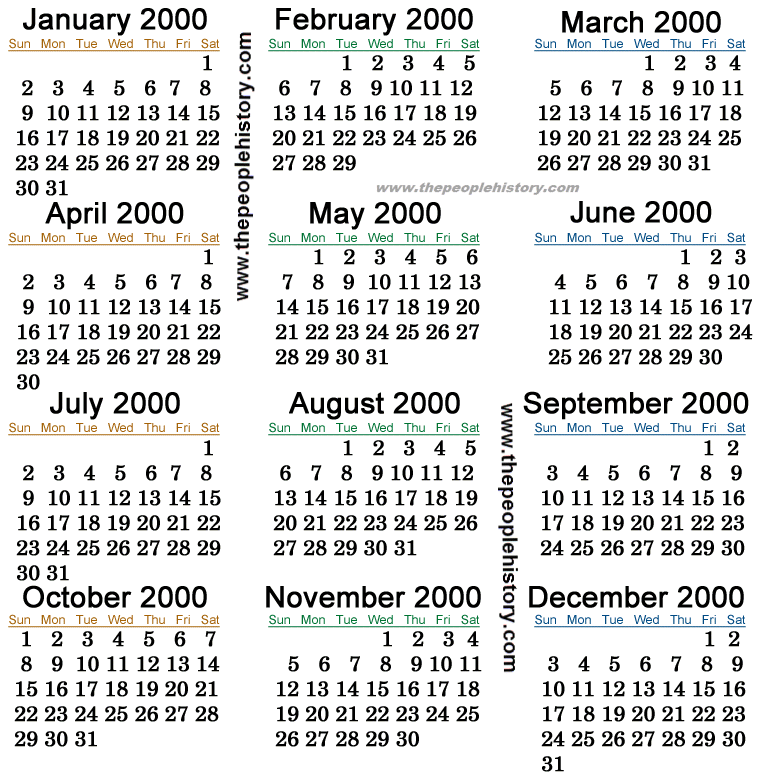 The Concerns over Y2K passes without the serious, widespread computer failures and malfunctions that had been predicted

One American astronaut and two Russian cosmonauts prepare for 4 month stay on the international space station,

According to NASA the hole in the Ozone layer over Antarctica has increased by .62 sq miles to 17 square miles in just 12 months

The NASDAQ peaks at 5132.52 just before the dot com bubble bursts.

It is agreed by European Airbus Consortium to go ahead with plans to build the worlds largest passenger plane the Airbus A3xx , it will accommodate up to 656 passengers.