The Year 1992 From The People History

What happened 30 years ago in 1992 Major News Stories include Minnesota's Mall of America Built, Windows 3.1 released, Euro Disney opens, Abortion rights activists demonstration in Washington, Maastricht treaty signed into law, Rioting breaks out in Los Angeles over the beating black motorist Rodney King, French Truck Drivers disrupt travel by using Trucks to blockade Roads, In Technology The first Nicotine patch is introduced to help stop smoking and DNA Fingerprinting is Invented. The continuing Balkan War for the next 3 years between Muslims, Serbs and Croats prompting UN intervention. In The UK Rioting breaks out in Cities including Bristol and in France Euro Disney opens. In the US Bill Clinton becomes president and the largest Mall in America Minnesota's Mall of America is constructed spanning 78 acres

What Events Happened in 1992

2. It hit the Bahamas on August 22nd as a Category 4 storm but quickly gained strength and moved towards Florida.

4. Hurricane Andrew had sustained winds of around 165 miles per hour and gusts over 200 mile per hour.

5. Estimates of the damage that it caused ranged between $27 and $35 billion and it was the costliest hurricane in U.S. history at that point in time.

6. The storm destroyed tens of thousands of homes and caused between 20 and 65 deaths.

7. By August 26th it was downgraded to a tropical storm and it dissipated in the Appalachian mountains by August 28th.

US President George H.W. Bush signs the North American Free Trade Agreement (NAFTA) on December 17 News Events. It was also signed by Canadian Prime Minister Brian Mulroney and Mexican President Carlos Salinas de Gortari on the same day. The agreement, also known as NAFTA, eliminated most trade restrictions and tariffs on trade between the three signatory nations. It was later signed into law by incoming US President Bill Clinton (who also supported the agreement) in 1993 and became effective in 1994 . The agreement was signed so close the end of George H.W. Bush’s term as his administration wanted to make sure the incoming Clinton administration would not be able to make drastic changes to the deal they had worked to secure.

US and UN intervention tries to end famine and civil war in Somalia with Operation Restore Hope.

1. Somalia was involved in various conflicts throughout the 1970s and 1980s leading to the outbreak of a civil war under dictator Muhammed Siad Barre. In 1991 Barre was overthrown and fled the country.

2. The United States had tried to bring food aid to the country starting in April of 1992 in "Operation Provide Comfort" but the deliveries were impeded by the fighting.

5. When President Bill Clinton took office he reduced the number of troops in Somalia and by June of 1993 only about 1,200 forces remained. The operation was also officially turned over to the United Nations in May of 1993.

6. On October 3, 1993 battle erupted between U.S. forces and Somali rebels in Mogadishu resulting in the death of 18 Americans and hundreds of Somali civilians and rebels.

7. After the costly battle, President Clinton ordered U.S. troops to be removed from combat and by March of 1994 all U.S. forces had left Somalia.

8. The United Nations withdrew its remaining task force by March of 1995 without having controlled the situation. Fighting continued in the country since then with periods of lessened violence.

9. Throughout the 2000s Somalia makes attempts at forming a central government but fighting between the central government, clans, and Islamist organizations (Al-Shabaab / Al-Qaeda) continues, keeping the country unstable. Ethiopia and the African Union try to intervene with peacekeeping missions.

10. In the early 2010s a famine strikes the country and it is estimated that over a quarter of a million people die. Kenya tries to intervene in the country, attacking Somali rebels. The United States begins drone operations against rebels as well.

11. In 2012 Somalia held its first election to actually take place in the country since 1967 and the first formally formed parliament in over 20 years is created.

12. The mid-2010s see continued attacks from Al-Shabaab but progress is also made as Somali leaders and the international community work to rebuild the country while still fighting against the terrorist groups.

2 examples from Childrens Toys From The 1992 Page 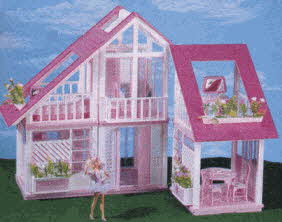 Barbie's Dream House
Manufacturer: Mattel
Price: $169.99
Description This dream house comes in three moveable parts which gives you more space and the option to change the shape of the house, unlike other dollhouses. Comes with all the features you love: windows and doors that open and close, a balcony, and flower boxes with colorful "flowers." Every room is furnished; the kitchen even has a stove and a refrigerator that really holds play food! There are twelve pieces of furniture and over ninety accessories in all. 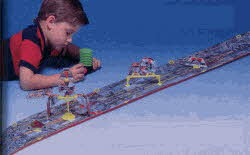 The maiden voyage of the Space Shuttle Endeavour began when the spacecraft was successfully launched from the Kennedy Space Center in Florida on May 7th. The mission, also referred to as STS-49, carried 7 astronauts on board who were tasked with recovering and repairing the Intelsat VI satellite. STS-49 set several records during the mission, including the first time three astronauts conducted a simultaneous space walk. The flight lasted nearly nine days before it returned to Earth safely, during which the mission’s goals were accomplished.

The Danish people vote against signing the Maastricht Treaty on June 2nd. It was a close vote with about 50.7% of voters in Denmark rejecting the treaty and 49.3% supporting it, and a 83.1% voter turnout. The Maastricht Treaty aimed to integrate Europe and create the legal framework for the establishment of the European Union. After the referendum failed, Denmark began negotiating with the EU members and was granted four exceptions to the Maastricht Treaty in what was called the Edinburgh Agreement. The next year Denmark held a new referendum and it passed with 56.7% percent approval and a 86.5% voter turnout.

Mafia boss John Gotti is sentenced to life in prison after being found guilty of conspiracy to commit murder and racketeering.

Mob boss John Gotti, known for his flamboyant style and large personality, was found guilty of murder and other crimes on April 2, 1992. Gotti had been known as the "Teflon Don" after being acquitted in 3 trials during the 1980s, but the FBI was able to make the charges stick after a high-ranking member of his crime family agreed to cooperate with the authorities. Gotti was later sentenced to life in prison on June 23 of that year. He died in prison at the age of 61 during June of 2002 after being diagnosed with throat cancer.

Following the installation of new pilings for the Kinzie Street Bridge which ruptured a tunnel which was part of the defunct Chicago Tunnel Company tunnels under the Chicago Loop. Over a period of time the mud from the river pushed through and eventually on April 13th the river poured into the tunnel and filled the other connecting tunnels under the Chicago Loop flooding basements of many Loop office buildings, retail stores and an underground shopping district, Electrical power and natural gas were shut off as a precaution in much of the area including the financial district closing down the financial district by mid morning. Only later did it come out that the city had been warned by a telecommunications worker while inspecting a cable who had seen and videoed mud in the tunnels, the city had decided it was not a priority and had put begun a bidding process for repairing the tunnels. It took 3 days to repair the breach and clear the flooding enough to allow business to resume in the Chicago Loop district and the cost to the city was estimated at $1.95 billion

The cable television network “Cartoon Network” is established by the Turner Broadcasting System during October. The concept was created by Betty Cohen who served as the President of Cartoon Network from 1992 to 2001. The first round of programming that aired on the network consisted of old Warner Bros., MGM, and Hanna-Barbera cartoons and the very first cartoon to air was a Looney Tunes short from the 1940s called “The Great Piggy Bank Robbery.” Eventually they expanded into original series with the limited “The Moxy Show” in 1993 and the popular “Space Ghost Coast to Coast” in 1994 . In the late 1990s they embraced more original programming like “Ed, Edd, n Eddy” and “The Powerpuff Girls.”

The largest shopping mall in the United States, the Mall of America, opened its doors to shoppers during August. The mall originally covered over 78 acres and has since expanded to more than 96 acres. It is located in Bloomington, Minnesota just south of Minneapolis and was built on the former site of Metropolitan Stadium. There are over 500 stores in the Mall which employ over 11,000 people. The Mall of America receives over 40 million visitors annually making it the largest tourist attraction in the Midwest.

Other Major Events From 1992

Signing of the Maastricht treaty on 7th February , which founded the European Union.

Turkey, an earthquake registering 6.8 on the Richter scale kills over 500

Gas that has leaked into sewer explodes in Guadalajara, Mexico on April 22nd - 215 dead, 1500 injured

Hindu militants tear down the Babri mosque in Ayodhya and during Hindu-Muslim rioting 2,000 lives are lost

IRAQ Continues to hamper the efforts of UN Weapons Inspectors

27th Amendment to the US constitution

FDA Urges Stopping the use of silicone gel breast implants

The largest shopping mall in the US, Minnesota's Mall of America is constructed spanning 78 acres

Fire damages a major part of Windsor Castle and a number of important works of art, books and furniture are lost

The Summer Olympics are held in Barcelona, Spain

Overthrow Of Communist Government in Afghanistan

The UK government closes 31 out of 50 of Britain's deep coal mines,

Violence flares in Germany against Immigrants blaming them for economic problems.

The North American Free Trade Agreement between U.S.A. , Canada and Mexico is signed

Bosnia and Herzegovina Recognized As Independent 1992

The Winter Olympic Games are held in Albertville, France

The first Nicotene patch is introduced to help stop smoking

Invention Invented by Inventors and Country ( or attributed to First Use )

Honey, I Blew Up The Kid

Color Me Badd with all for love

Boyz II Men with End of The Road

Madonna with This Used to be my Playground

Mariah Carey with Ill Be There

The Adventures of Sherlock Holmes

Star Trek: The Next Generation 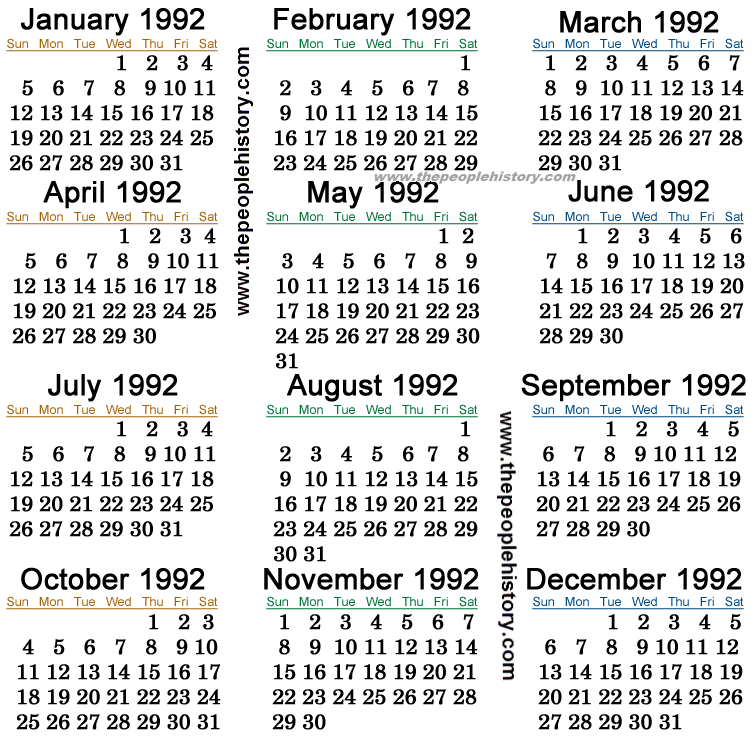