What happened in 1996 Major News Stories include Ebay starts online auction website, IBM's Deep Blue defeats Chess Champion Gary Kasparov, Centennial Olympic Park, Atlanta Nail bomb, Dunblane Massacre, Dolly the sheep becomes the first mammal to be successfully cloned, Mad Cow Disease BSE kills humans in England, In the UK Prince Charles and Diana, Princess of Wales get divorced and Mad Cow Disease hits Britain ( BSE ) causing the mass slaughter of Herds of Cows and new laws to stop beef being sold on the bone. A severe Meningitas Epidemic occurs in West Africa. In technology DVD's are Launched in Japan and the number of users on the Internet exceed 10 million This is also the year Ebay and Ask Jeeves is started and the first ever cloning of a mammal Dolly the sheep.

What Events Happened in 1996

The Republic of China, also known as Taiwan, held its first direct presidential election during March. The election was won by Lee Teng-hui, who had already been the President of Taiwan since 1988. Teng-hui was responsible for introducing many democratic reforms to the country including the direct presidential election. He was rewarded by voters when he won with 54 percent of the vote with a 76 percent voter turnout. Teng-hui would remain President of Taiwan until 2000 when he stepped down observing the new constitutional term limits that he helped create.

On September 10th of 1996 the United Nations adopts the Comprehensive Nuclear Test Ban Treaty (CTBT). The treaty banned all nations from testing nuclear explosions above or below ground for any purpose, military or civilian. The treaty also banned countries from aiding or encouraging other nations to test nuclear technology and created an international monitoring system that would keep track of nuclear explosions across the globe. A total of 183 countries have signed the treaty and of those 159 have ratified it. The United States signed on September 24th, 1996 but has not yet ratified it.

Major League Soccer makes its debut in the United States during April of 1996. The first MLS match was held in San Jose, California between the San Jose Clash and D.C. United, with San Jose taking the league’s first win. MLS was created in 1993 out of a deal made in order for the U.S. to host the 1994 FIFA World Cup but it did not become fully operational until 1996. The league originally began with ten teams and, despite having some financial and organizational difficulties in its early years, it has expanded several times in between 1998 and the present, doubling the number of teams with even more future additions being planned and created.

Kofi Annan of Ghana is chosen as the Secretary-General of the United Nations during December of 1996. Annan replaced Boutros Boutros-Ghali of Egypt who had previously served in the post since 1992. Kofi Annan began his term as the seventh Secretary-General in 1997 and would remain in the position until 2006, when he was replaced by South Korea’s Ban Ki-moon. Annan’s term, while not scandal-free, was marked by reform and a revitalization of the U.N., including an increased focus on human rights around the globe.

NASA launches the STS-72 Space Shuttle mission during January of 1996. The Space Shuttle Endeavour launched from the Kennedy Space Center in Florida with 6 astronauts on board. The goal of the mission was to retrieve the Japanese Space Flyer Unit satellite, deliver and retrieve a number of NASA experiments, and to perform 2 space walks during which they could test tools that would be used to assemble the International Space Station. The mission was successfully completed and after 8 days and 22 hours they returned to Earth.

Prince Charles and Diana, Princess of Wales get divorced.

More Information for Charles and Diana

1. Princess Diana and Prince Charles are officially divorced during August of 1996.

2. The couple had married in 1981 as the world watched the extravagant event.

4. Their early marriage had been painted as a fairy tale but it was also highly dissected in the public eye and the pair were often featured in tabloids.

5. By 1992 the couple had grown apart and were officially separated.

6. Eventually Diana and Charles agreed to settlement terms and at the urging of Queen Elizabeth II they were officially divorced.

7. Diana was stripped of the title “Her Royal Highness” as a result of the divorce but was allowed to keep the name Diana, Princess of Wales.


2 examples from Childrens Toys From The 1996 Page

Buzz Lightyear Costume
Price: $19.99
Description A one-piece body suit printed on the front and back to look like Buzz Lightyear from Toy Story.

Tickle Me Elmo
Manufacturer: Tyco
Price: $27.99
Description Tickle his tummy once to make him giggle, twice to make him laugh longer. Tickle him a third time and he shakes with laughter. This toy was one of the most popular toys for the 1996 Christmas season, with many stores running out of stock and battling crowds trying to get their hands on one.

Other Major Events From 1996

2. The Mars Global Surveyor was a robotic spacecraft with the mission objective to take high resolution photos of Mars while while mapping the planet from orbit.

3. The MGS arrived at Mars and entered its orbit in September of 1997.

5. This was the first successful Mars mission in about 20 years and was one of the most comprehensive missions, returning large amounts of useful data to NASA.

Nintendo releases their newest gaming system the Nintendo 64 or N64 in Japan.

More Information for the Nintendo 64

The Nintendo 64 gaming console is first released in Japan during June of 1996. Also known as the N64, Nintendo’s new gaming system was praised by critics as one of the best home gaming consoles to have ever been released. The N64 proved to be popular with consumers as well with retailers seeing a high demand for the product within the first year of its release. At the time of its release it had some of the best graphics of any comparable gaming console but was criticized for having very few games available when compared to other systems. However, many of the games that were available for the system were thought of as some of the most popular and influential games of all time, such as, Super Mario 64, GoldenEye 007, and The Legend of Zelda: Ocarina of Time.

In May of 1996 the United Kingdom implemented a policy of non cooperation with the European Union in response to an EU ban on worldwide exports of British beef that had been instated in March. The ban had been placed on the beef exports in an effort to lessen the outbreak of Bovine Spongiform Encephalopathy (BSE), or, as it was also known, Mad Cow Disease. Fears over BSE had increased after it was linked to a variant called Creutzfeldt-Jakob disease that had proven fatal to humans in 1995. The disease was fatal to cows and had been discovered in the UK in the mid-1980s. In order to reduce the spread of BSE, the UK had to cull all at risk cattle and it was not until 1999 that the ban ended.

Severe thunderstorms and a tornado in Bangladesh kills 600.

The U.S. stock markets, including the Dow Jones Industrial Average, gains at an incredibly fast pace and ends the year over the 6,000 mark

The IRA explodes bomb on June 15th in the Arndale shopping centre in Manchester.

A bomb loaded with high explosives is detonated at a U.S. military housing complex in Saudi Arabia

The Williamette Valley Flood, sweeps through the Pacific Northwest

The Summer Olympics are held in Atlanta United States

Gunmen kill 17 Greek Tourists outside the Europa Hotel in Cairo

Peruvian guerrillas take hundreds of people hostage at the official residence of Japan's ambassador to Peru in Lima.

The supertanker, the Sea Empress, runs aground on the welsh coast, spilling 70,000 tons of crude oil

The first version of the Java programming language is released.

Ozone layer over the Arctic continues to be depleted

American Pathfinder launched on its 310 million mile mission to Mars

A Time to Kill

Rage Against the Machine 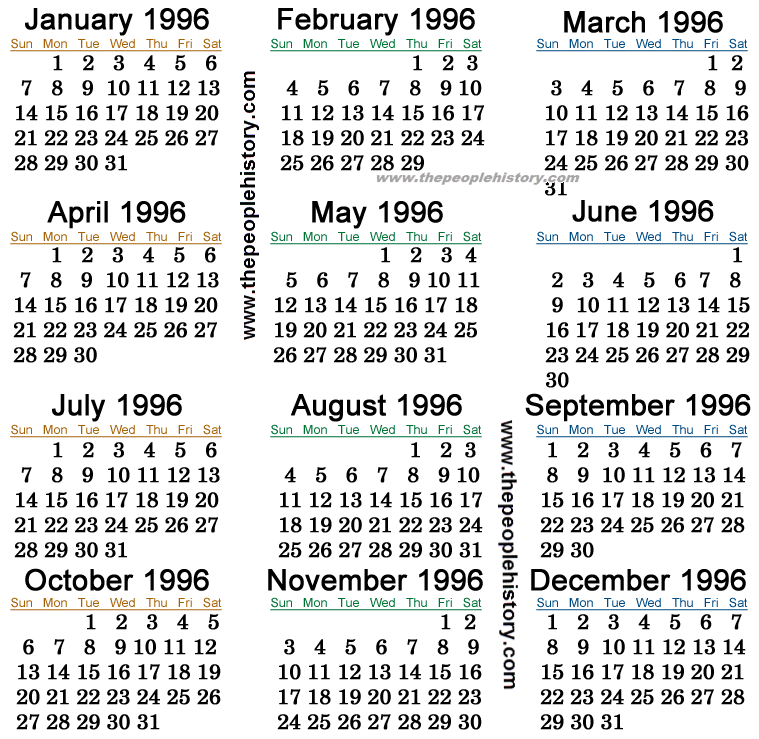