1992 : Hurricane Andrew strikes the Bahamas and two days later makes landfall in South Florida followed by Southern Louisiana, Hurricane Andrew was a Category 5 hurricane and had some of the highest winds ever recorded of 175 MPH. The hurricane was the costliest natural disaster in U.S. history at that moment in time ( surpassed later by Hurricane Katrina in 2005) and caused the death of 65.

1902 : President Theodore Roosevelt during his tour of New England became the first President to ride in an automobile in public when he was driven round Hartford in a Victoria automobile.

1902 : The Cadillac Company to sell the Cadillac range of cars is formed. The Cadillac is named after the 17th century French explorer Antoine Laumet de La Mothe, sieur de Cadillac, who founded Detroit in 1701.

1911 : Germany and France were having a standoff over Morocco and the German War Office was getting more aggressive. It was rumored that the Kaiser’s government was planning to occupy the west coast of Morocco, cutting off Britain’s two principal trade routes. The English government was trying to cope with riots and strikes at home it was felt that the Kaiser was taking advantage of the unrest.

1922 : Post war Italy had four different governments in rapid succession in only three years after their war government fell in 1919. The Appleton Post Crescent, an American newspaper commented, “The Italian crisis is chiefly a crisis of confidence. The masses – and this would include not only the proletariat, but also the majority of the middle classes … have lost faith in the capacity and the good will of the government.”

From our 1958 Hats and Accessories 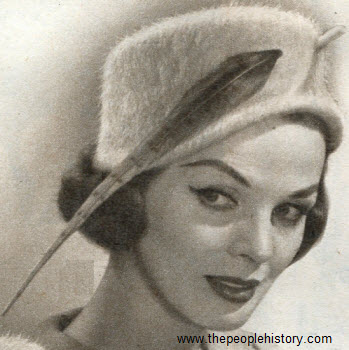 1935 : Italy was in severe conflict with Ethiopia and the emperor of the African nation, Haile Selassie, feared a global conflict, “between the white and black races, (and) the very existence of humanity itself … .” Selassie prophesied, “We will be back in 1914, there will be no more security for the world than there was then. International treaties will have no more validity than the word of a thief.”

1941 : German troops attack Leningrad as part of Operation Barbarossa, but fail in it's capture and are forced to start a siege of the city known as the "Siege of Leningrad" when all railway links were cut and all routes that could supply Leningrad closed including by water, and the city was encircled by German controlled troops until January 18th 1943.

1944 : Following the D-Day landings Hitler decrees that if Germany is forced out of Paris the city and all it's landmarks should be left a smoldering ruin. The Paris military governor Major General Dietrich von Cholitz lied to his superiors and left the city’s landmarks intact.

1948 : In Belgium Charles Theodore Henri Antoine Meinrad acted as regent of the kingdom on behalf of his exiled brother, Leopold who was exiled in Switzerland. Leopold was banned due to allegations that he was too friendly to the Germans during the occupation of Belgium. Charles has never moved into his brother’s suites in the palace and does not dip into the 30,000,000 million Belgium francs that he is allowed as king. He seldom leaves his apartments and keeps a low profile.

1954 : A build up of red air power made the American army withdraw four out of six U.S. military units from South Korea. After President Syngman Ree leaked the information to the south, protests erupted in the streets of the capitalist nation. The U.S. tried to restrain Ree from trying to liberate communist North Korea by himself with his 700,000 soldiers.

August 22nd, 1966 : In England, The Oxford Playhouse Company was preparing to show the play, “The Trial of Lee Oswald” by Mark Lane and producer Frank Hauser. Lane was a lawyer in the U.S. who was asked by Hauser to help put the play on. The first part of the production was about prosecuting Oswald, but the second part was to show the complexity of the trial and facts that might have proved Oswald innocent. In the end the play was not to give a final verdict.

1968 : Czechs protest against Soviet invasion In Prague and at the United Nations headquarters in New York City.

1972 : In the wake of President Richard Nixon’s visit to Peking, China, Secretary of State, William P. Rogers, called for American young people to meet “the new generation of Chinese leaders.” Rogers told the San Francisco Commonwealth Club that the exchange of youth and boosting trade with China was desirable. He continued, “Chinese leaders are establishing people-to-people contacts that avoid the complications of official visits…”

1972 : Rhodesia is thrown out of the Olympic Games in the face of mounting international pressure and pressure from African nations who threatened to boycott the games if Rhodesia.

August 22nd, 1988 : Two hundred and forty-one Palestinians and three Israelis have been killed since the December 9th Palestinian protest broke out in the territories seized by Israel in the 1967 Six Day War. Recently, three Palestinians attempted to sabotage the Israeli army by launching attacks inside Israel. All three were killed by the Israeli army.

1993 : Japan’s Ise Shine is said to be the home of the royal family’s ancestral deities and has had 61 restorations since 685. Japanese pilgrims have flocked to the shrine since the 15th century and the shrine is supposed to represent cleansing and restoration for the country. Ise is rebuilt every 20 years, except in times of war or disaster. The Ise Shrine is the most significant holy site for the Shinto religion and contains the Scared Mirror, which is considered one of Japan’s national treasures.

1999 : A passenger jet Flight CI642 attempting to land at Hong Kong's new Chek Lap Kok airport in severe winds has crashed causing the death of 2 and severe injuries to a further 20.

Known For : Scooter Libby besat known as former Chief of Staff to the former Vice President, Dick Cheney who was charged with Obstruction of justice, Perjury and Making false statements during the investigation of the Plame affair ( Valerie E. Wilson (aka "Valerie Plame") ) , He was found guilty of all three counts and in 2007 sentenced to 30 months in prison (commuted by President George W. Bush), $250,000 fine Two years of supervised release, including 400 hours of community service. Due to the felony conviction his license to practice law was suspended by the Supreme Court of Pennsylvania.

Known For : Honor Blackman best known for her role as Pussy Galore in the Bond Movie Goldfinger. She is also well remembered for her time in the TV series The Avengers playing Cathy Gale opposite John Steed (Patrick Macnee). Honor Blackman is an accomplished stage actress having played in The Musicals Sound of Music, My Fair Lady and Cabaret in London's West End.

2003 : The Alabama chief justice, Roy Moore, is suspended when he refuses to obey a federal court order to remove his Ten Commandments monument from the rotunda of his courthouse.

2005 : Wild fires in Portugal which have left at least 15 dead so far and 140,000 hectares destroyed are the worst ever experienced in the country. The fires have been caused by a combination of hot weather and a warm wind which are fanning the fires and spreading them. The Portuguese government has put out an urgent appeal to other European countries asking for fire fighting men and equipment to help the stretched Portuguese fire fighters. So far the response has been good with 10 helicopters and aircraft together with additional men and equipment.

2006 : Although the United Nations demanded that Iran stop uranium enrichment, Tehran remains defiant. U.N. inspectors were turned away and the Nuclear Non-proliferation Treaty has been violated. It is feared that Iran will develop the atomic bomb.

August 22nd, 2006 : The country of Liberia produced two sets of stamps from their post office, the first to be made since the start of the civil war in 1989. The civil war ended in 2003, and the stamps featured the new president Ellen Johnson-Sirleaf.

2006 : The United Kingdom pledged to help lower the mortality rate of children and mothers in India. The proposed plan was projected to cost £252 million and was aimed at improving healthcare for the poor.

2009 : A meeting between North and South Korean officials was held for the first time in two years. The meeting came after North Korea sent a delegation to Seoul to pay their respects after the death of former South Korean president Kim Dae-Jung.

2011 : Martin Luther King, Jr. National Memorial in West Potomac Park in Washington, D.C., southwest of the National Mall opens to the public, A ceremony dedicating the Memorial was scheduled for Sunday, August 28th, 2011, the 48th anniversary of the "I Have a Dream" speech delivered from the steps of the Lincoln Memorial in 1963 was postponed indefinitely due to Hurricane Irene striking the area.

August 22nd, 2011 : Rebels Advance on Libyan Capital of Tripoli making Gaddafi's hold on power less likely to continue. Gaddafi has been in hiding since the NATO attacks on Libya in June but forces loyal to him are continuing to fight including mounting sniper attacks against the rebels.

2012 : It was announced that the late night talk show Jimmy Kimmel Live is going to challenge the other late night talk shows hosted by Jay Leno and David Letterman as it moves into the same time slot starting January 8th, 2013. Kimmel's show had increased viewership and he stated that they would not change the format of the show after they changed time slots.

August 22nd, 2013 : US officials admitted that the NSA (National Security Agency) illegally collected tens of thousands of personal emails between US citizens. The emails had no links to suspected terrorists and the program was deemed illegal by the Foreign Intelligence Surveillance Court in 2011. This only added to the criticism of the US surveillance program after leaks furnished by Edward Snowden. 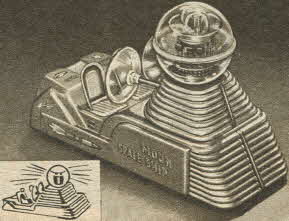 Moon Space Ship
Manufacturer: Nomura
Price: $3.79
Contacts object, turns in another direction. Piston-action satellite. Has two lighted radar screens and is made of metal. **Note: I recently found this toy for sale on a vintage toy auction website with an asking price of $1300.00**