The Early to mid Forties were dominated by World War II and following the end of the war the start of the Baby Boomer Years, Technology advancements during wartime including the Jet Engine, Nuclear Fusion, Radar, Rocket Technology and others later became the starting points for Space Exploration and Improved Air Travel

What Happened in 1940 History

Benjamin O. Davis, Sr. is appointed as a General in the United States Army, becoming the first African-American to hold such a position.

President Roosevelt signs the Selective Training and Service Act, making it the first military draft to be created during a peacetime in the United States.

Franklin D. Roosevelt is elected for an unprecedented third term as the U.S. president.

Germany begins bombing London in what was known as "The Blitz" in an attempt to weaken the British Royal Air Force.

What Happened in 1941 History


The Mount Rushmore sculpture is completed.

The Siege of Leningrad begins as German troops enter the Soviet Union, the siege will last until 1944.

What Happened in 1942 History


The draft age in the United States is lowered from 21 to 18.

The famous and well-regarded film "Casablanca" premieres in New York City during the month of November.


The Battle of Midway begins between Japan and the U.S.

The U.S. Congress creates several branches of the armed forces for women to join the war effort, including the Army's Women;s Auxiliary Corps or WACs, the Navy's WAVES, the Coast Guard's SPARs, and the Women Air Force Service Pilots.

The United States and Canada begin the unjust removal and internment of Japanese-Americans and Japanese-Canadians in the fear that they will become a security threat during the war.

What Happened in 1943 History


The Pentagon building is completed.

Mussolini resigns from his position of power and Italy surrenders during World War II.

General Dwight D. Eisenhower takes control of the Allied forces when he is appointed as the Supreme Allied Commander.

An uprising takes place in the Warsaw Jewish Ghetto against the Nazis.

What Happened in 1944 History


President Roosevelt is elected to a fourth term in the United States, becoming the only person to ever do so. His fourth term does not last long however, as he died during the next year in April of 1945.

Operation Overlord (D-Day) sees 150,000 Allied troops successfully storm the beachs of Normandy in France. Paris is soon liberated as the troops make their way through the country.

Popular musician and band leader Glenn Miller is reported missing while on his way to perform for troops in Paris.

Poland is liberated from Nazi occupation by Soviet troops and the Polish Home Army.

What Happened in 1945 History


World War II ends as Allied and Soviet forces make their way towards Germany, liberating concentration camps along the way.

The United States drops two atomic bombs on Japan, bringing an end to the Pacific side of the war.

The United Nations is created after fifty nations sign the charter.

Vietnam declares its independence from France under Ho Chi Minh.

What Happened in 1946 History


The ENIAC (Electronic Numerical Integrator and Computer), the first programmable electronic computer, is unveiled at the University of Pennsylvania.

The Philippines becomes independent after being under U.S. rule for forty-eight years.

The BBC resumes regular television broadcasting after being off the air during World War II.

What Happened in 1947 History


The transistor is invented at Bell Laboratories by William Shockley, Walter Brattain, and John Bardeen.

India and Pakistan become independent from the United Kingdom.

The Polaroid instant camera is demonstrated.

Jackie Robinson becomes a part of the Dodgers, becoming the first African-American to play baseball for the Major League.

Practicality was of great essence during this time. Clothing was meant just to cover the body, and it was designed for the busy men and women involved in fighting or working during this time. 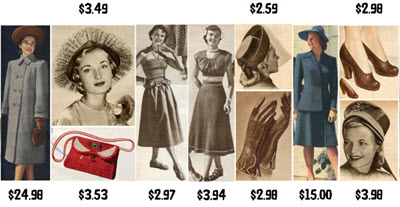 Childrens Toys From The 1940's

During the early 40's to aid the war effort few toys were sold 1. Because men were off fighting in Europe and Japan 2. anything that could be used to make toys steel / rubber etc. was also needed for producing tanks / ships / planes and other weapons.

Part of our Collection of Toys from The 1940's 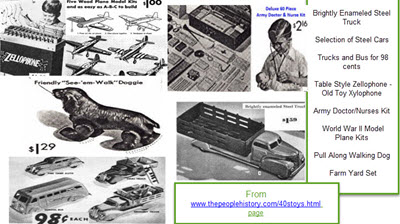 Cars From the 40s 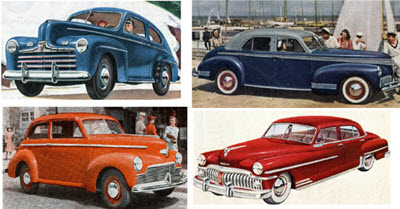 Additional amenities of a Forties home would include items that are thought of as necessities by today's building standards. For instance, a hot water heater, barbecue patio, double garage, and/or heating system would be included in the sale of a specific home. The exterior of a home built during this decade was often of a red brick siding, and the interior home flooring was often of hardwood, just as it was in earlier decades. Other luxuries of homes included newly-installed roofing, kitchen cupboards, spacious rooms, and thermostat controlled heat.

What Happened in 1948 History


Israel is created as an independent Jewish state.

George de Mestral, a Swiss engineer, creates Velcro but it is not formally patented until 1955.

The first NASCAR race for modified stock cars is held in Daytona Beach.

What Happened in 1949 History

"The Goldbergs" airs live on CBS as one of the very first television sitcoms.

The first test flight of the De Havilland Comet takes place, it would later become the first commercial passenger jet.


Sporting Changes In The 40's

Baseball Stars are quick to join the forces and fight for their country
Following the end of world war II Jackie Robinson signed a contract to play first base for the Brooklyn Dodgers, breaking the color barrier in baseball.

Other Major Events From The 40's

The Forties were dominated by World War II , and after a long period of Economic Recession throughout the world, starting with Wall Street Crash in 1929 and through most of the 30's, the world would be a different place after the 2nd world war ended. As so often happens during war technological advances in any technology that is seen to provide some advantage jump in leaps and bounds the 40's provide some of the best examples
America helped fund the war by issueing War Savings Bonds, for each $75.00 American's invested 10 years later they would pay out $100.00
The first ever use of a Nuclear Bomb during wartime when the US bombed Hiroshima and Nagasaki in Japan.
Major advancements in radar to help with tracking Enemy aircraft which after the war changed the aviation industry
The improvements in the use of Jet Engines
The use of unmanned rockets as a weapon ( V2 ) to carry bombs
Mans inhumanity to Man exceeded anything preceding with the use of concentration camps as part of "The Holocaust " the name applied to the systematic state-sponsored persecution and genocide of the Jews

Following the end of the war during the second half of the 40's marked the beginning of the East-West conflict and the Cold War.

Countries gaining independence from the UK included Pakistan and India

Following the continued growth of Jewish refugees and settlers to Israel during the war, in 1948 the region became embroiled in Arab-Israeli War

After achieving the independence he so desired for his country On January 30, 1948, on his way to a prayer meeting, Gandhi was shot dead

The late 30's and The war in the 40's changed many things and one of those was how black sportsmen became popular heroes and paved the way for future generations, these included Joe Louis ( Boxer ), Jesse Owens ( Runner ) and Jackie Robinson ( Baseball Player ).

Bing Crosby couple of his films from the 40's

Humphrey Bogart couple of his films from the 40's

Abbott and Costello couple of films from the 40's

Gary Cooper couple of his films from the 40's

Spencer Tracy couple of his films from the 40's

James Cagney couple of his films from the 40's