The Human Genome Project is completed during April. Scientists from around the world successfully finished sequencing about 99% of the human genome. They identified over 20,000 individual genes and base pairs that create the basic DNA composition of humans. The project began in 1990 and it was a collaborative global effort led by the National Institutes of Health. Following its completion, scientists hoped that the research would help in understanding how to predict and cure certain diseases in the future.

The Space Shuttle Columbia disaster takes place on February 1st. NASA’s STS-107 mission carried seven crew members (Rick Husband, William McCool, David Brown, Kalpana Chawla, Michael Anderson, Laurel Clark, and Ilan Ramon) into space where they conducted scientific experiments for 16 days. The Columbia disintegrated upon re-entry, tragically killing all on board. The disaster was likely caused by damage taken to the left wing during the launch when a piece of foam hit the wing. Following the catastrophe, NASA’s space shuttle program was suspended for 2 years while they investigated the disaster and tried improve the program.

The Portuguese soccer sensation Cristiano Ronaldo made his Premier League debut for Manchester United during August at the age of 18. Ronaldo played with Manchester United until 2009 when he left the Premier League to join La Liga as a forward for Real Madrid and was paid a record-breaking 94 million Euros. Considered by many to be one of the best soccer players of all time, he has won over 20 trophies and he holds dozens of records including having scored the most goals in all UEFA competitions and becoming the first player to score 100 goals in the UEFA Champions League.

The final Concorde flight took place during November. The Concorde was a supersonic, high-end passenger jet that flew at twice the speed of sound. The first Concorde flight took place in 1969 and regular flights began in 1976. Round-trip tickets cost thousands of dollars and the service was mainly used by wealthy patrons. After a tragic Concorde crash in 2000 and the September 11, 2001 terror attacks, demand for the service decreased and they shuttered the service due to low passenger numbers.

1. NASA confirms the discovery of one of the oldest known exoplanets, PSR B1620-26 b.

2. The planet, nicknamed “Methuselah,” was thought to be about 12.7 billion years old and is about 12,400 light years from Earth.

3. It was initially found in 1993 but its status was not officially confirmed until 10 years later with the help of the Hubble telescope.

4. Astronomers noted that it was the first planet to be confirmed with a circumbinary orbit (orbiting a pulsar and a white dwarf star) and the first in a globular cluster.

5. They also determined that the exoplanet has a mass of about 2.6 times that of Jupiter and it takes about 100 years to complete its orbit.

The European Space Agency (ESA) launches the SMART-1 (Small Missions Advanced Research in Technology-1) spacecraft during September . The unmanned satellite was launched from a site in Kourou, French Guiana. This was the ESA’s first mission to the Moon and the space probe orbited the Moon for about three years. It conducted several experiments that measured chemical elements and minerals visible on the lunar surface and solar activity. It was purposefully crashed into the Moon’s surface after 2,890 orbits.

China launched Shenzhou 5, its first manned space mission during October of 2003. The Shenzhou 5 mission carried China’s first astronaut Yang Liwei, who had been a pilot. The flight lasted just over 21 hours and landed successfully in inner Mongolia. Accomplishing this feat made China the third nation, after the Soviet Union (Russia) and the United States, to launch its own manned space flight.

The United States and the United Kingdom start with their shock and awe campaign with a massive air strikes on military targets in Baghdad before the invasion of Iraq by Land Forces.

Saddam Hussein, former President of Iraq, is captured in Tikrit by the U.S. 4th Infantry Division.

A major severe weather outbreak spawned more tornadoes than any week in U.S. history. 393 tornadoes were reported in 19 states

Do Not Call List starts providing consumers on June 27th with an opportunity to limit telemarketing calls.

Keiko the Orca made famous by the "Free Willy" movies, dies

The Lord of the Rings: The Return of the King

Pirates of the Caribbean: The Curse of the Black Pearl

Terminator 3: Rise of the Machines

Italy suffers a near countrywide blackout when electricity supplies fail

The highest temperature ever recorded in the UK - 38.5°C (101.3°F) at Brogdale near Faversham in Kent

A car bomb attack in the holy city of Najaf, Iraq has left nearly 100 dead including a leading Shia Muslim politician Ayatollah Hakim.

The wanted terrorist Abu Abbas is captured in Baghdad

Army Pfc. Jessica Lynch is amongst those captured US Troops free her 9 days later

President George W. Bush on the aircraft carrier USS Abraham Lincoln announces major combat in Iraq is over on May 1

Justice Roy Moore, is suspended when he refused to take down the Ten Commandments from an Alabama state justice building.

Terrorists from Al-Qaeda drive two trucks packed with explosives and bombs into the Bet Israel and Neve Shalom synagogues in Istanbul, Turkey killing 27 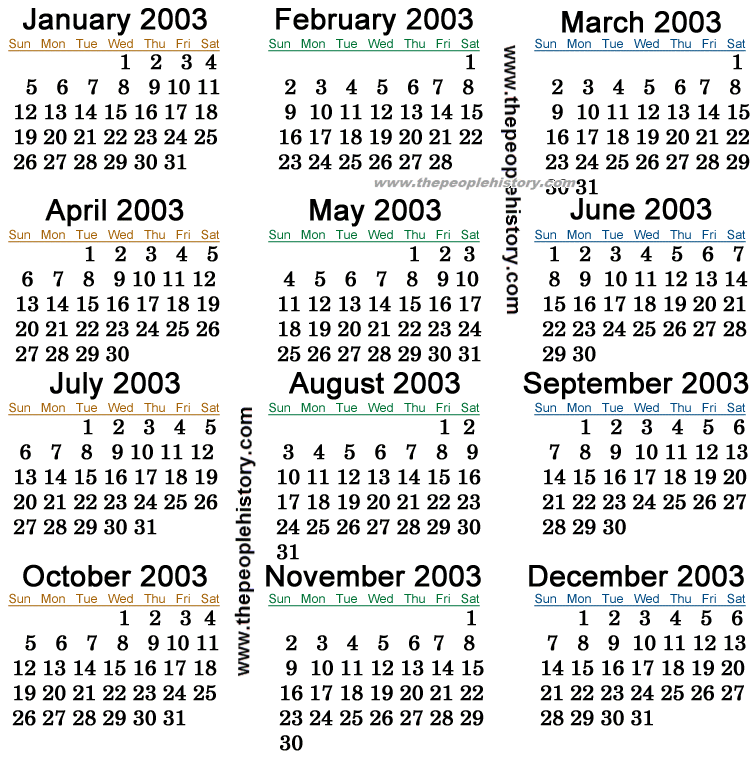 The Space Shuttle Columbia disintegrates over Texas upon reentry, killing all seven astronauts onboard.

The highly infectious disease SARS ( Severe Acute Respiratory Syndrome ) spreads from China, Singapore and Vietnam, Worldwide nearly 9,000 People are effected in 15 countries and over 800 die from the effects.

Human Genome Project successfully completed with 99% of the human genome sequenced to 99.99% accuracy.

Secretary of State Colin Powell urges the U.N. Security Council to move against Iraq due to possession of weapons of mass destruction

In the biggest blackout in the history of the north America some 50 million people in the northeastern states of US and southern Canada lose power.

The birth of Prometea, the first cloned horse by Italian scientists.

The space probe Galileo makes a fiery dive into Jupitors atmosphere it was launched in 1989 and is one of the most successful NASA Projects.

Concorde makes its last commercial flight, bringing the era of airliner supersonic travel to a close, at least for the time being

Libya agrees to give Up Chemical Weapons