Two bombs are exploded at the Boston Marathon on April 15, killing 3 and injuring 264 people. Two pressure cooker bombs were set off at the Boston Marathon near the finish line, killing three people and injuring another two hundred and sixty-four people. The suspected bombers were named as Dzhokhar and Tamerlan Tsarnaev. Police eventually chased down the suspects during a confrontation in which Tamerlan was run over by Dzhokhar while trying to escape. Dzhokhar was found hiding in a residential area on April 19th and police took him into custody after a stand off.

1. On April 15th, 2013, two pressure cooker bombs explode at 2:49pm near the finish line during the Boston Marathon. Three people are killed and another 264 people are injured.

2. The FBI releases images of the suspected bombers on April 18th and they are identified as Dzhokhar Tsarnaev and Tamerlan Tsarnaev, two brothers from Chechnya.

3. Soon after the images were released the Tsarnaev brothers reportedly killed an MIT police officer and stole an SUV.

4. The brothers get into a gun fight with police in Watertown, Massachusetts. Dzhokhar was injured and had run over Tamerlan who had been shot by police.

5. Dzhokhar escaped from the police and a massive manhunt takes place on April 19th in Watertown.

6. He was discovered hiding in a boat in a back yard by a resident and after a brief stand-off with police he was arrested and taken to a hospital.

7. Tsarnaev was charged on April 22nd and pleaded not guilty. It is believed that the Tsarnaev brothers acted on their radical Islamic beliefs and were not affiliated with other terror groups.

Millions of Target customers' data is stolen in a large security breach over the holiday shopping season.

1. Data is stolen from an estimated 40 million Target customers between November 27th and December 15th.

2. Target admits to the security breach on December 19th after the security blogger Brian Krebs posts about it. They state that PIN information was not taken.

3. On December 20th, Target states that they do not believe social security numbers or birth dates were taken.

4. On December 27th, they announce that PIN information had been accessed after further investigation.

5. On January 10th, 2014, it is announced that up to 70 million more people had their information stolen during the security breach.

US officials admitted that the NSA (National Security Agency) illegally collected tens of thousands of personal emails between US citizens. The emails had no links to suspected terrorists and the program was deemed illegal by the Foreign Intelligence Surveillance Court in 2011. This only added to the criticism of the US surveillance program after leaks furnished by Edward Snowden.

Edward Snowden, a former NSA contractor, leaks information about the NSA's secret surveillance program PRISM to The Guardian and the Washington Post. The news about this program upsets many citizens in the United States and around the world who were concerned about privacy violations and government transparency.

Television shows like New Girl, The Walking Dead, Revenge, The Americans, Girls, Brooklyn-Nine-Nine, and The Blacklist are widely watched and discussed.

Oscar-winning actress Reese Witherspoon was arrested in Atlanta, Georgia for disorderly conduct after her husband was pulled over on suspicion of driving while drunk.

The Mars Orbiter Mission (MOM), also known as the Mangalyaan satellite launched in November. The mission was launched by the Indian Space Research Organization (ISRO) from the Satish Dhawan Space Centre and it was India’s first interplanetary mission. The probe’s purpose was to study the topography, morphology, mineralogy and atmosphere of the red planet. The Mars Orbiter was successfully placed into the orbit of Mars the following year and has successfully been transmitting data back to Earth.

The United States government re-opens after agreeing on a last-minute deal.

More Information and Timeline for the US Government Shut Down.

In the middle of October of 2013 the United States Congress passed a last-minute deal to re-open the government and raise the debt limit at the last possible second. The Senate first struck a bi-partisan deal and then the House passed the deal with several Republican members joining the Democrats in voting to move forward. The shutdown began on the first of October when Congress could not agree on how to fund the government. As a result, many government agencies were impacted with hundreds of thousands of employees furloughed and several government services and departments were suspended from operating. Many popular tourist attractions were also shut down, such as the Grand Canyon, Statue of Liberty, and national parks.

Lance Armstrong admitted to doping in all of his Tour de France wins during his cycling career in an interview with Oprah Winfrey.

President Obama is inaugurated for his second term on January 21st.

A powerful meteor explodes near Chelyabinsk in Russia and injures nearly 1,500 people while causing damage to several thousand buildings on February 15th.

North Korea continues missile and nuclear tests despite international pressure, increasing tension between the secretive nation and the rest of the world. North Korea has carried out a nuclear test despite warnings from the United Nations. Authorities monitoring the test stated that it had double the force of a test conducted in 2009.

A massive EF-5 tornado hits Moore, Oklahoma on May 20th, destroying the town including an elementary school and killing 23 people and injuring hundreds of others.

A French laboratory states that they have confirmed the use of Sarin gas attacks against citizens of Syria as part of the ongoing civil war in the country.

A garment factory in Bangladesh collapses, killing 1,127 people and injuring another 2,500 people, workers had been ordered to report there despite warnings of building safety from the previous day.

On April 17th, a huge explosion of ammonium nitrate occurred at a fertilizer plant in West, Texas near Waco, killing at least fifteen people and injuring another one-hundred and sixty people. Over one-hundred buildings were damaged or destroyed.

An elected government completed a full term for the first time in the country's history. Prime Minister Raja Pervez Ashraf's government was the first to complete a full term since the country's formation in 1947. The success was praised for moving in the right direction of democracy as all previous governments had either been overthrown, ended by political infighting, or ended with assassinations and murders.

Members of the French parliament voted 249-97 to approve one of the most important parts of a law that would redefine marriage as an agreement between two people and not just a man and a woman. French citizens gathered in protest against the law several times before its passage.

A 4.8 magnitude earthquake struck near the city of Lucca, Italy on June 21st. There were no initial reports of damage or injuries. The tremor was accompanied by several aftershocks which were felt throughout the region. 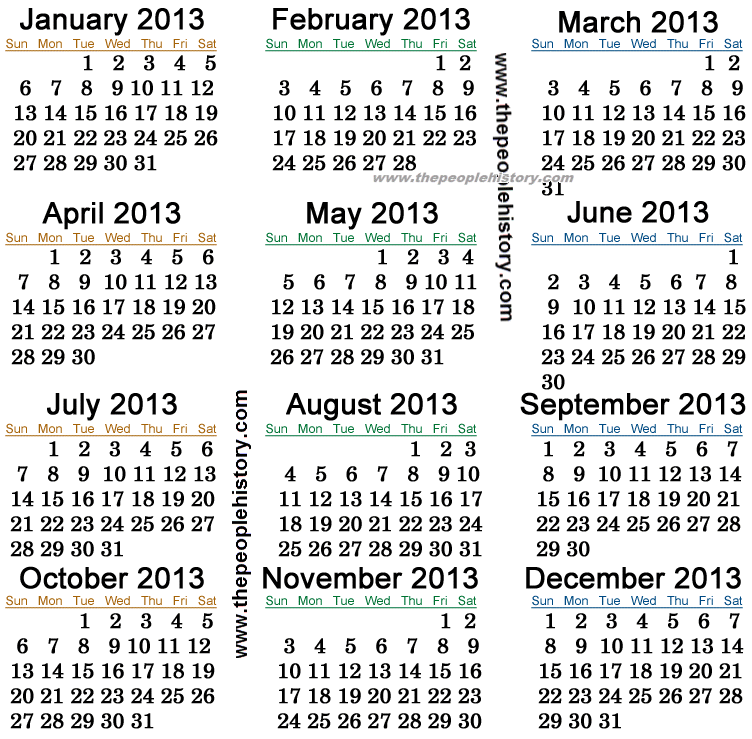 The micro-video application Vine is released by Twitter and takes social media by storm with short (under 15 second) videos dominating the media world.

Google releases some of their prototype Google Glass, high-tech eyewear to be tested by a few.

Hugo Chavez, the controversial president of Venezuela, died at the age of fifty-eight on March 5th after battling cancer. A new president would be chosen in the country after elections to take place within thirty days after his death.