What Happened in 1969 Important News and Events, Key Technology and Popular Culture

What happened in 1969 Major News Stories include The Beatles' last public performance, on the roof of Apple Records, First Concorde test flight is conducted In France, Boeing 747 jumbo jet makes its debut, Pontiac Firebird Trans Am the epitome of the American muscle car is introduced, Woodstock attracts more than 350,000 rock-n-roll fans, Members of a cult led by Charles Manson murder five people, Chappaquiddick Affair Senator Edward Kennedy, PBS Established, The first man is landed on the moon on the Apollo 11 mission by the United States and Neil Armstrong and Edwin 'Buzz' Aldrin became the first humans to set foot on the Moon.

1969 On July 20th one of mans crowning achievements occurred when American Astronaut Neil Armstrong became the first human to set foot on the Moon and uttered the immortal words "That's one small step for man, one giant leap for mankind." . The opposition to the war continued to increase with more and more attending anti war demonstrations and demanding that the US withdrew from Vietnam. The music came from groups including the Doors, Led Zeppelin, Janis Joplin and the Beatles and the most famous music festival of modern times "WOODSTOCK" took place on a New York Farm on August 15 to August 17th with more than 400,000 avid music fans attending to see the Who, Jimi Hendrix, Crosby Stills Nash and Young and others perform live. fashions reflected the anti war sentiment with military jackets adorned with peace signs, and other trends including long unkempt wild hair and headbands showed the feelings of anti establishment felt by the youth.

NASA’s Apollo 10 space mission launched and landed successfully during May. The 3-man crew consisted of Thomas P. Stafford (the Commander), John W. Young (the Command Module Pilot), and Eugene A. Cernan (the Lunar Module Pilot). The flight was a test run for the first Moon landing which took place 2 months later. The Apollo 10 mission successfully tested all aspects of a lunar landing except the actual landing. The crew conducted a lunar orbit and lunar descent to about 9 miles from the surface, a rendezvous and docking with the command module, tested various systems, and conducted transmissions back to Earth. The mission completed all objectives and returned to Earth after 8 days.

More Information and Timeline For The First Man On The Moon
1. 1961 May 25th President Kennedy asks Congress for $531 million to put a man on the moon before the end of the decade
2. 1963 June 16th Russians put the first woman in space on the Vostok 6
3. 1965 March 18th First space walk by the Russian cosmonaut Alexey Leonov from the Voskhod 2
4. 1966 March 16th first docking of two spacecraft Gemini 8 Commanded by Neil Armstrong docks with unmanned Agena Target Vehicle
5. 1968 December 24th Apollo 8, was the first human space flight to leave Earth orbit and enter a different orbit around the moon.
6. 1969 July 16th Apollo 11 Launched from the Kennedy Space Center Launch Complex 39 in Merritt Island, Florida carrying Neil A. Armstrong ( Commander ) Michael Collins ( Command Module Pilot ) and Edwin "Buzz" E. Aldrin, Jr. ( Lunar Module Pilot )
7. July 19th Apollo 11 passed behind the Moon and fired its service propulsion engine to enter lunar orbit.
8. July 20th Lunar module (LM) Eagle ( Neil A. Armstrong and Edwin "Buzz" E. Aldrin, Jr. ) separated from the command module Columbia ( Michael Collins ) .
9. July 20th Lunar module (LM) Eagle lands on the moons surface in the Sea of Tranquillity
10. july 21st Neil Armstrong stepped off Eagle's footpad and uttered his famous line "That's one small step for [a] man, one giant leap for mankind " Edwin 'Buzz' Aldrin joined him, describing the view as "Magnificent desolation."
11. July 21st Lunar module (LM) Eagle leaves the moons surface to rendezvous with Columbia
12. July 24th The command module Columbia carrying the 3 astronauts splashed down in the Pacific Ocean
Estimates put the number who watched or listened to the Moon landing between 1/2 and 1 billion people around the world ( From Webmaster I consider myself privileged to have watched and listened to Neil A. Armstrong's famous words "That's one small step for [a] man, one giant leap for mankind " ) . For Information for the Space Race 1961,

NASA’s Apollo 9 mission launches on March 3 News Events. The purpose of the mission was to prepare for an eventual manned lunar landing later that year. It was the first space test of a complete Apollo spacecraft including the lunar module and Saturn V launch rocket. The included James McDivitt, David Scott, and Russell Schweickart. They performed the first docking and extraction of a lunar module and the first crewed flight of a lunar module. The crew also performed several test on the lunar module systems and a two person space walk. The Apollo 9 space mission returned to Earth successfully after 10 days in space.

More Information and Timeline for Apollo 12
Apollo 12, the second manned moon mission, launched on November 14th carrying astronauts Charles Conrad Jr., Alan Bean, and Richard Gordon Jr. The mission successfully landed on the Moon on November 19th about 950 miles away from where the Apollo 11 mission had landed. The mission's objectives included seismic experiments, examining the Surveyor III spacecraft, studying possible future landing sites, and human ability to work on the moon, among many other things. The crew tried to broadcast parts the mission but the television camera was damaged by sun exposure soon after landing. The crew left on November 20th and got to Earth on November 24th, after having spent about 31 hours on the surface of the moon.

More Information and Timeline For Significant Music Events in 1969
1. January 30th The Beatles, with Billy Preston, gave their final live performance on the roof of the Apple building in London, England, the live performance was an impromptu event that ran for 42 minutes featuring Get Back, I Want You (She's So Heavy), Don't Let Me Down, I've Got A Feeling, One After 909, Danny Boy, Dig A Pony, God Save The Queen and A Pretty Girl Is Like A Melody later featured as the climax of their Let It Be film
2. March 25th to March 31st Following The Marriage of John Lennon and Yoko Ono on March 20th in Gibralta they hold a week-long Bed-In for Peace at the Amsterdam Hilton Hotel inviting the world's press into their hotel room every day between 9 a.m. and 9 p.m
3. July 4th Atlanta International Pop Festival attracted an audience of approximately 100,000 to watch 16 performers including Janis Joplin, Johnny Rivers, Blood, Sweat & Tears, Canned Heat, Joe Cocker, Creedence Clearwater Revival, Sweetwater and Led Zeppelin
4. August 15th to 18th The Woodstock Festival attracted an audience of approximately 500,000 to watch 35 performers including Ravi Shankar, Joan Baez, Santana, Grateful Dead, Creedence Clearwater Revival, Janis Joplin with The Kozmic Blues Band, Sly & the Family Stone, The Who, Jefferson Airplane, Joe Cocker, The Band, Blood, Sweat & Tears, Crosby, Stills, Nash & Young and Jimi Hendrix at White Lake, New York, U.S.A.
5. August 30th and 31st Isle of Wight Festival attracted an audience of approximately 150,000 to watch 26 performers including Bob Dylan, The Who, Blonde On Blonde, Joe Cocker, The Moody Blues and Free at Wootton, Isle Of Wight, England
6. September 13th Toronto Rock and Roll Revival attracted an audience of approximately 20,000 to watch 20 performers including Chicago, Alice Cooper, Chuck Berry, Jerry Lee Lewis, Gene Vincent, Little Richard, Doug Kershaw and The Doors, Screaming Lord Sutch and John Lennon, Yoko Ono and The Plastic Ono Band at at Varsity Stadium, of the University of Toronto, Ontario, Canada
7. December 6th Altamont Speedway Free Festival attracted an audience of approximately 300,000 to watch 10 performers including The Rolling Stones, Santana, Jefferson Airplane, The Flying Burrito Brothers, and Crosby, Stills, Nash & Young at Altamont Speedway, California, U.S.A. The concert is best known for having been marred by considerable violence caused by alcahol and drugs including by the Hells Angels motorcycle club who were used for security round the stage.
1969 provided so many significant live music events that I thought they should be included in a Music Timeline for the year, I hope you enjoyed taking the trip in time and memories that the timeline provides

This rock album featured such popular songs as "Here Comes the Sun," "Come Together," "Something," and "Oh! Darling."
The full track listing includes:
Come Together, Something, Maxwell's Silver Hammer, Oh! Darling, Octopus's Garden, I Want You, Here Comes the Sun, Because, You Never Give Me Your Money, Sun King, Mean Mr. Mustard, Polythene Pam, She Came In Through The Bathroom Window, Golden Slumbers, Carry That Weight, The End, Her Majesty

It also topped the charts around the world once released, staying in the UK and US charts for over 80 weeks. While there were initially mixed reviews about the album, many fans believe it to be the best the band had ever produced and it remains one of the top selling Beatles albums of all time.

More Information and Timeline for the ARPANET
1. ARPA (Advance Research Projects Agency) was created in 1958
2. In 1966 the creation of the ARPA computer network, or ARPANET, began.
3. The first point of the ARPANET was installed at a computer in UCLA in September
4. In October, the second point was installed at a computer in the Stanford Research Institute.
5. The first communication between the two is sent and received across the new network on October 29th,
6. After that, it is installed at several other universities across the United States.
7. ARPANET, the predecessor to the Internet, was not demonstrated to the public until 1972
8. By 1989 the ARPANET had become somewhat obsolete and was shut down.

More Information and Timeline for Project Blue Book.
Project Blue Book, the United States Air Force's investigation into unidentified flying objects (UFOs), officially comes to an end on December 17, 1969. The investigations began in 1952 when government officials started to collect information related to UFO sightings. Between 1952 and 1969, there were over 12,000 reports compiled by officials and of those reports all but 701 cases were identified as either an atmospheric, astronomical, or man-made event. The project concluded that UFOs did not threaten national security and did not present evidence of extraterrestrial life or technology and the US government decided that it would be far to costly to continue to investigate UFO sightings.

The Montreal Expos baseball team makes its debut during April. Located in Montreal, Canada, they were Major League Baseball’s first team to be established outside of the United States. They were one of four teams added at the same time, the other teams included the San Diego Padres, Kansas City Royals, and the Seattle Pilots (became Milwaukee Brewers in 1970). They won their first game against the New York Mets but struggled to do well the rest of the season. They were a part of the National League and their first manager was Gene Mauch. In 2004 the team moved to Washington D.C. and became the Washington Nationals.

The Echo 2 satellite mission ends during June . Echo 2 was a 135-foot satellite that was launched by NASA in January of 1964 and it orbited the Earth in a near polar orbit for the duration of its time in space. It was easily visible to the naked eye across Earth’s surface due to its large size and type of orbit. It was used to perform some passive communications experiments and to measure the shape of the Earth. The satellite burned up upon re-entry into Earth’s atmosphere.

The Soviet Union launched the Venera 5 and Venera 6 spacecraft during the month of January. The two spacecrafts were identical in design and build and were launched five days apart with the mission of measuring the atmosphere of Venus during their descents onto the planet’s surface. Venera 5 made it to Venus on the 16th of May in 1969 and Venera 6 arrived the next day. The missions were partially successful in that both vehicles were able to transmit measurements for about 50 minutes each but ultimately failed in that their instruments were then presumably damaged by the surface pressure and heat that they encountered on their descents. 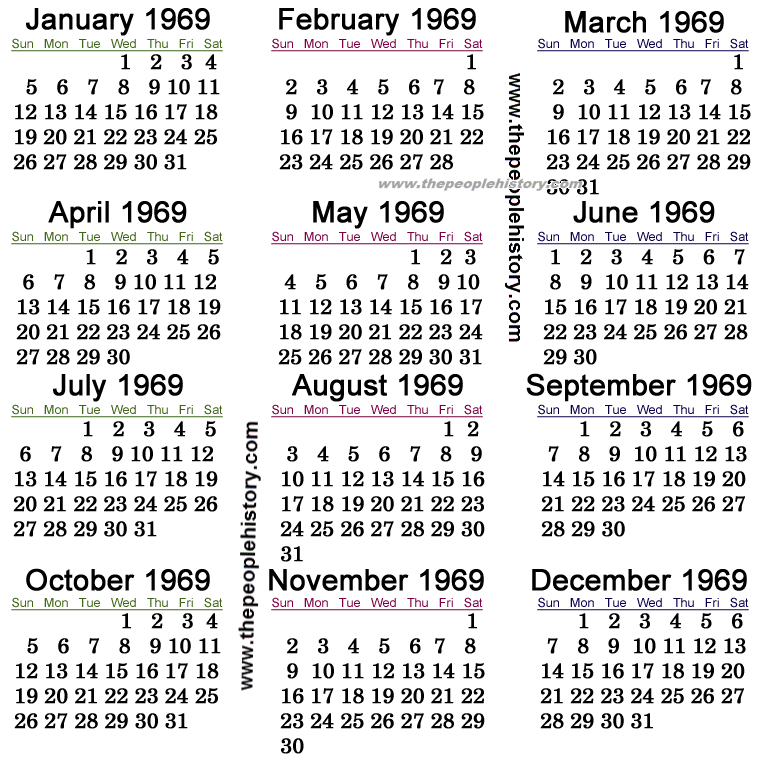 Part of our Collection of Toys From 1969

More News and Key Events From 1969