2003 : President George W. Bush on the aircraft carrier USS Abraham Lincoln off the California coast announces in a speech to the nation, major combat in Iraq is over.

1962 : The first Kmart department store opens in Garden City, Michigan selling a range of Clothes, shoes, housewares, bedding, furniture, jewelry, beauty products, and electronics. Kmart went through a period of rapid expansion up to the early eighties but from the late 80's due to lack of investment in technology and increased competition from the growing Walmart and Target stores and change in customer tastes sales continued to decline. In 2005 following sales decline Kmart merged with Sears, Roebuck and Company. From our 1920 Fashion Accessories Page 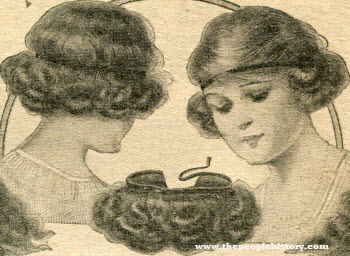 1920s National Bob Hair Piece
Price $3.95 - $5.95
Dame fashion never tires of inventing new ways to dress your hair attractively, and she claims that bobbed hair is a style that is fast achieve becoming popular. However, you need not cut off your own hair to achieve this charming effect. Wear the National Bob and see how much it adds to your attractiveness, style and youth. The Bob consists of soft curls and puffs of genuine first quality human hair attached to a velvet ribbon band which snaps securely and comfortably around the head. Your own hair is concealed underneath the artistic curling, giving the effect of short hair cut by a master hand. All shades except gray. Choose from superfine quality hair at $3.95 or the finest first quality convent hair at $5.95.

1941 : The first "Code talkers" Navajo Indians are specially recruited by the Marines to serve in their standard communications units in the Pacific Theater, they provide an unbreakable combat voice communications code.

1925 : Field Marshall Hinderburg a right wing conservative was elected as the president of Germany.

1931 : The Gangster Al Capone is being sought for questioning over the murder of Mike De Pike Hitler from a rival gang by detectives in Chicago a number of other members of his gang.

From Our 1920s Ladies Dresses

1931 : Kate Smith began her radio career on CBS. She became best known for her rendition of Irving Berlin's song "God Bless America." Her career spanned an amazing five decades and peaked during the 1940s

1937 : America strengthens it's Neutrality Act first passed in 1935 and amended in 1936 which created an embargo on arms trading with the countries at war, loans or credits to countries at war. In 1937 the Neutrality Act was amended again stating "all trade with countries involved in war must be conducted on a cash-and-carry basis."

1942 : The leader of the Free French Military Resistance Movement based in London Charles De Gaulle is rallying troops and support to help keep up the fight for freedom for his french compatriots.

1961 : Castro bans elections in Cuba saying "The revolution has no time for elections." and telling the 10,000's who attended the May Day Celebrations Cuba is a socialist country. He has also stated all Roman Catholic priests would be expelled and all Roman Catholic and private schools would be nationalized.

1965 : Fierce fighting is still happening on the streets in Dominica between US Paratroopers and local forces despite a cease fire having been agreed and signed.

1967 : Elvis Presley, married his longtime girlfriend, Priscilla Ann Beaulieu, 21, at a at the Aladdin Hotel in Las Vegas.

Born This Day In History 1st May

Known For : Tim McGraw is an American country singer and musician. He has released 15 studio albums and had several number ones in the Country Album Charts according to Billboard. He is one of the most popular and awarded country music stars, winning 3 Grammys, 11 CMA Awards, 14 Academy of Country Music Awards, 3 People's Choice Awards, and 10 American Music Awards. He is also one of the most successful recording artists of all-time, selling over 80 million records worldwide. He has also dabbled in acting, appearing in several films including The Blind Side, Tomorrowland, Flicka, Country Strong, and The Kingdom. He has been married to fellow country music star Faith Hill since 1996.

1973 : About one and a half million workers joined the TUC call for a one-day strike in protest at the government's pay restraint policy and price rises. The biggest effect was in the transport industry including the railways which forced many others to stay home because they could not get to work.

1977 : A march by 100,000 May Day protesters turned into a gunfight between rival leftist groups and 33 people were left dead from the fighting.

1982 : The 1982 World’s Fair opens in Knoxville, Tennessee. The theme of the year was “Energy Turns the World” and more than 11 million people visited the exposition during the seven months that it was open.

1982 : British Warships and Fighter Bombers bombed Argentinean positions at Port Stanley on the Islands as war broke out over the sovereignty of the Falkland Islands after Argentina invaded the Islands.

1994 : The Brazilian Formula One racing driver Ayrton Senna has been killed in a crash at the San Marino Grand Prix at Imola, near Bologna in Italy.

1997 : After nearly 20 years of Conservative government, British voters give the Labour Party, led by Tony Blair, a landslide victory in British parliamentary elections.

2001 : Thomas E. Blanton Jr. became the second ex-Ku Klux Klansman to be convicted in the 16th Street Baptist Church bombing by members of a Ku Klux Klan group in Birmingham, Alabama. The bombing of the African-American church resulted in the deaths of four girls.

2005 : The United States monitored apparent military tests in North Korea. Reports had been that the North Korean military fired short-range missiles into the Sea of Japan.

2006 : The Great American Strike was a one day boycott of United States schools and businesses by immigrants, both legal and illegal, mostly Latin American origin it is estimated that one million people participated in the demonstrations of mostly Hispanic immigrants skipped work and took to the streets in protest at the immigration reform proposals.

2006 : President Evo Morales signs decree nationalizing hydrocarbons including natural gas, he Ordered the military and engineers of YPFB, the state firm, to occupy and secure energy installations, and gave 6 months for current operators to re-negotiate contracts which would increase the percentage of revenue to the government from resources by 20%.

Born This Day In History 1st May

Known For : Jack Paar was a famous comedian and host in the United States. He began his career as a disc jockey in the Midwest before moving to national radio. He hosted several radio programs including a season of Take It or Leave It and The $64 Question. After World War II, he signed a contract with RKO Pictures and appeared in several films. He became the second host of the Tonight Show after Steve Allen and turned it into a hit, selling millions in advertising. He remained its host until 1962 when Johnny Carson took over. Paar was known for being very emotional and having strong reactions, most famously walking off set without warning when he was told to cut a joke and not returning for three weeks until the network apologized and let him tell the joke. After his stint on the Tonight Show, Paar was given his own variety show "The Jack Paar Program" which aired until 1965. Paar made occasional appearances on television through the 1970s before retiring.

2007 : Police across the United Kingdom and Europe arrested over thirty people believed to be involved with extremist animal rights groups who were targeting various organizations and businesses. Some crimes the police believed these groups were planning to commit or had already committed included burglary and blackmail.

2008 : Australia's drought continues and is presently in the grip of what the locals call the "Big Dry" the worst period of drought in a century. The effects of this ongoing drought range from up to 10% of farmers giving up to wheat production going from a high of 25m tonnes of wheat each year to wheat crops below 10m tonnes per year a decrease of more than 50%.

2008 : In an effort to improve the Chinese capital city of Beijing ahead of the 2008 Summer Olympics, the government has banned smoking in most public buildings. The government has enlisted nearly 100,000 current employees to act as enforcers of the ban. The ban is also a measure to improve health conditions in the country, as a large percentage of its population are smokers.

2009 : The Swiss bank, UBS, refused to share information with the Internal Revenue Service in the United States on over 50,000 customers who are believed to be hiding up to fifteen billion dollars in taxes in Swiss bank accounts. The largest bank in Switzerland argued that releasing that information would violate the law in Switzerland after the IRS began a civil lawsuit against the bank in order to find out the identity of the secret account holders.

2010 : Pope Benedict XVI ordered that the Legionaries of Christ, a Catholic order founded by Mexican priest Marcial Maciel, be purified. The order's founding priest had been accused of sexually abusing boys for over thirty years, among other allegations, but had denied those claims until his death in 2006. The statement came from the Pope after an investigation by bishops concluded that the allegations were indeed true.

2012 : Occupy Wall Street protesters gathered across the US to stage a day of protest for International Workers' Day. Thousands of people gathered in New York, Oakland, Washington D.C., Los Angeles, Atlanta, and Chicago to peacefully protest, marking the first major protest since police disabled the movement's camps across the country in late 2011.

2013 : Flash floods across Saudi Arabia left at least thirteen people dead. Heavy rainfall flooded plains and valleys in the desert country and the rains were reported to be the heaviest to hit Saudi Arabia in over twenty-five years.