Ongoing financial crisis and recession which began in late 2007 continues with many calling it the worst financial crisis since the Great Depression of the 1930s causing house prices to decline, and unemployment to increase. In 2009 governments in the US and around the world pumped trillions of dollars into the financial system and into the economies hoping to avert another Great Depression and by the end of 2009 although unemployment had continued to increase, markets had recovered and most thought the worst was over.

Europe - Russia shuts off all gas supplies to Europe

Russia shuts off all gas supplies to Europe through Ukraine.

Russia fully closes down gas supplies to Ukraine due to a dispute over a debt of $2.4 billion to Gazprom. Reduced supply had started on January 1st but due to negotiations breaking down all supplies were cut on January 7th. Most of the European Union relies of Gas from the Gas Fields of Russia so although the dispute was between Russia and the Ukraine the effects of it are felt in Western Europe with Bulgaria, Moldova and Slovakia the worst effected. The dispute lasted until a settlement was reached between Gazprom and the Ukraine on January 30th, 2009.

2. Chief Engineer Mike Perry takes 14 members of the crew into a "secure room" as per anti-piracy training.

3. The 4 Pirates board the ship but are unable to gain control of the ship

4. After failing to take control of the ship the pirates take Captain Richard Phillips as a hostage and get in a Lifeboat

6. April 9th to April 12th Stand off between the 4 pirates holding Captain Phillips on the Lifeboat and the USS Bainbridge and USS Halyburton

7. April 11th MV Maersk and it's Navy Escort arrive at the port of Mombasa, Kenya

8. April 12th Following concern that the Captain is in danger U.S. Navy SEAL marksmen open fire and kill the three pirates on the lifeboat. Captain Phillips is rescued uninjured

NASA launches the final space shuttle mission to the Hubble Telescope during May. The Space Shuttle Atlantis carried a seven person crew to complete repairs on the Hubble Telescope for the fifth and final time during the STS-125 mission. The crew consisted of Commander Scott Altman and pilot Gregory Johnson, as well as mission Specialists Michael Good, Megan McArthur, John Grunsfeld, Michael Massimino, and Andrew Feustel. The crew was successful in their mission of replacing several parts and adding two new instruments to the space telescope over the course of five space walks. They also filmed the progress of their mission with an IMAX camera.

The Death of the King of Pop Michael Jackson ( June 25th ) brings worldwide outpourings of grief, he is the most successful entertainer of all time. His career began in 1964 as the lead singer and youngest member of The Jackson 5. His 1982 album Thriller remains the best-selling album of all time. His personal life led to much critisism including over his ever changing appearance including his nose, and skin color, allegations of child sexual abuse for which he was tried and acquitted in 2005. A public memorial service is held for musician Michael Jackson at the Staples Center in Los Angeles, California. His death is still under investigation and possible charges against his former Doctor will come in 2010. After more than 12 months questions over his life and death generate considerable public interest

The top two selling movies in 2009 are "Harry Potter and the Half-Blood Prince" and "Ice Age: Dawn of the Dinosaurs"

NATO (North Atlantic Treaty Organization) observed its 60th Anniversary at its 21st Summit during April of 2009. The summit was co-hosted by France and Germany and was held in the cities of Strasbourg, Baden-Baden, and Kehl on the 3rd and 4th of April. During the summit Anders Fogh Rasmussen, the former Prime Minister of Denmark, was appointed as the Secretary-General of the organization. The group discussed several topics including the conflict in Afghanistan, NATO’s relationship with Russia, and a re-evaluation of future strategies.

More Information and Timeline for Maoist Protesters in Nepal

On November 12, 2009 thousands of protesters from the Unified Communist Party of Nepal blocked entry points to Singha Durbar, which is the official seat of Nepalese government, as part of a two-day restoration of what they call “civilian supremacy”. They blocked eight access points to the principal government secretariat, and were led by the Maoist chairman and former Prime Minister Pushpa Kamal Dahal ‘Prachanda,’ Mohan Vaidya ‘Kiran’ and Baburam Bhattarai. The Nepalese capital was badly disrupted by the Maoists, who chanted slogans against the government and blocked all of the roads that lead to Singha Durbar.

Barack Obama is inaugurated as the 44th President

The deadliest bushfires in Australian history ( Black Saturday bushfires ) in the Australian state of Victoria leave 173 people dead and more than 2000 homes destroyed.

Ceasefire in the Gaza War

Israel and Hamas declare a unilateral ceasefire in the Gaza War.

G-20 summit, involving state leaders rather than the usual finance ministers, meets in London and later in the year in Pittsburg to discuss the ongoing global financial crisis

The President of Guinea-Bissau, João Bernardo Vieira, is assassinated.

Thailand state of emergency in Bangkok

Gunmen, near the Gaddafi Stadium in Lahore, Pakistan fire on a bus carrying the Sri Lankan cricket team.

A coup d'état in Madagascar overthrows the President Marc Ravalomanana.

The country of Paraguay is left with no power for a few hours and 60 million in Brazil also suffer power outage for up to 6 hours.

Greenland the least densely populated country in the world ( 836,109 sq miles ) population less than 60,000 an autonomous country within the Kingdom of Denmark, gains control over its law enforcement, judicial affairs, and natural resources

Roxana Saberi, an Iranian-American journalist, is sentenced to eight years in prison for espionage by an Iranian court

Following the reelection of Iranian president Mahmoud Ahmadinejad on June 13th , there are a series of sustained protests which are stopped by Iranian Forces.

North Korea launches the Kwangmyŏngsŏng-2 satellite, Later in the year announces it had conducted a second successful nuclear test in the province of North Hamgyong.

Following former U.S. President Bill Clinton meeting with with Kim Jong-il in North Korea two American journalists, who had been arrested and imprisoned for illegal entry earlier in the year receives pardons.

A tsunami triggered by An 8.3-magnitude earthquake near the Samoan Islands destroys communities and harbors in Samoa and American Samoa leaving nearly 200 deaths

A 7.6-magnitude earthquake strikes 28 miles west-northwest of Padang, Sumatra killing over 1,000 in Indonesia

US Airways Flight 1549 after being struck by a flock of Canada geese shortly after takeoff Piloted by Captain Chesley B. "Sully" Sullenberger makes a successful Crash landing In the Hudson River 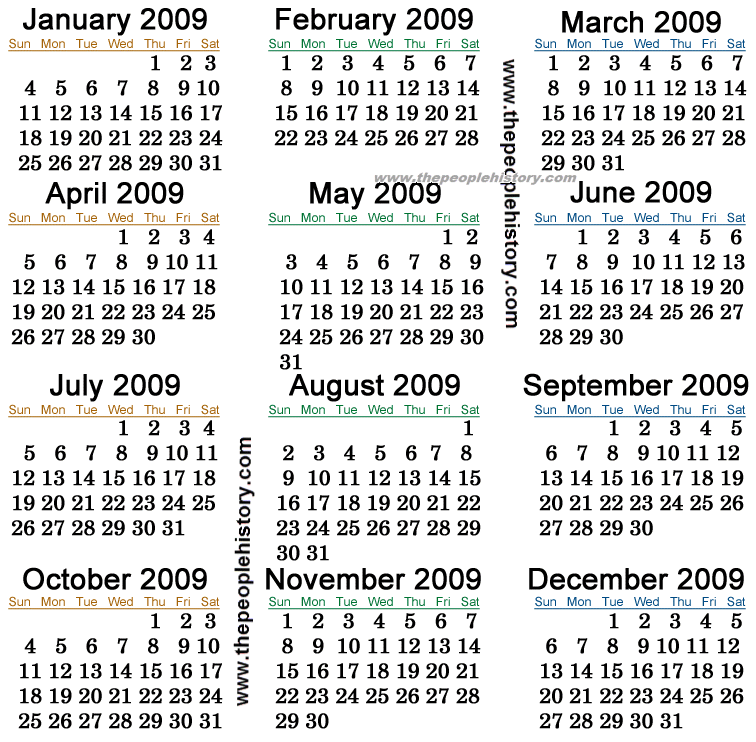 An American and Russian satellites collide over Siberia, creating a number of Conspiracy theories. But the facts are as the number of satellites increase above the earth the chances of Space collisions increases.

NASA launches the Lunar Reconnaissance Orbiter/LCROSS probes to the Moon to search for water ice near the Moon's south pole. In November NASA announces they found 'significant' ammounts of water on moon

The longest total solar eclipse of the 21st century, lasting up to 6 minutes and 38.8 seconds, occurs over parts of Asia and the Pacific Ocean.

Mobile Phone technology continues to grow with increased use of 3G networks and improvemnents in the Operating Systems that drives most moblile phones today.