The Year 1990 From The People History

North and South Yemen, also known as the Yemen Arab Republic and the People’s Democratic Republic of Yemen, are unified as the Republic of Yemen in May. North Yemen had been a part of the Ottoman Empire prior to its independence in 1918 after the Ottoman collapse. South Yemen had been a part of the British Empire until 1967 when it became an independent socialist republic. In 1990, the two nations decided to merge under the leadership of Ali Salem al Beidh (from South Yemen) and Ali Abdullah Saleh (from North Yemen). After the announcement, the new nation was to go through a 30 month transitional period.

2. The earthquake hit near the Caspian Sea, northwest of Tehran and near the cities of Rudbar and Munjil.

3. The earthquake effected an area of about 20,000 square miles, destroying thousands of homes. An estimated 400,000 people were left homeless after the disaster.

Tim Berners-Lee publishes his formal proposal for the World Wide Web during November. Berners-Lee’s proposal outlined a plan for a system that would use hypertext, web pages, browsers, and web servers to share documents across the internet. Berners-Lee had first proposed his idea to colleagues at CERN in Switzerland who then worked with him to develop the system for about two years before it became functional. His original goal was to make the sharing of documents easy and universal for scientists and education purposes around the globe but had acknowledged the potential for commercial involvement. The creation of the World Wide Web has since formed the standard for how we access and use the internet.

NASA’s STS-31 mission deploys the Hubble Space Telescope during April. The mission launched from the Kennedy Space Center in Florida. The sophisticated space telescope was carried on the Space Shuttle Discovery and deployed by the five person crew who also filmed the process using IMAX cameras. The Hubble telescope was the first space telescope put into orbit that could be repaired by astronauts when maintenance was needed. The mission lasted five days and successfully returned to Earth, landing at the Edwards Air Force Base in California.

The most complete skeleton of a T-Rex is found in South Dakota ( Sue ).

More Information and Timeline for Sue the T. Rex.

One of the largest and most well-preserved Tyrannosaurus Rex fossilized skeletons is found by paleontologist Sue Hendrickson near Faith, South Dakota in August of 1990. The skeleton was named “Sue” after the person who discovered it. “Sue” was over 90 percent complete and measured about thirteen feet all and forty feet long. A team of six uncovered the skeleton over about seventeen days to remove “Sue” from the bluff where she was discovered. Chicago’s Field Museum eventually purchased the specimen for over 8 million dollars and spent tens of thousands of hours preserving and assembling one of the most important dinosaur discoveries to ever be seen.

During February of 1990 Nelson Mandela was released from prison in South Africa after 27 years of imprisonment. Mandela had been one of the prominent leaders in the anti-apartheid movement. He joined the movement in 1944 and soon became the deputy national president of the oldest black political organization in South Africa, the African National Congress (ANC). In 1964, he was imprisoned for his involvement in a paramilitary branch of the ANC that had been retaliating against the government for an attack on peaceful protesters. After Mandela’s release, he became the head of the anti-apartheid movement and helped negotiate its end. In 1994 he became the first black president of South Africa after being elected in the first multiracial elections.

1. The Ulysses space craft was launched in 1990 and was a joint effort between the ESA and NASA.

2. The probe’s mission was studying the Sun and solar system’s magnetic field, also known as the heliosphere.

3. The European Space Agency’s (ESA) space probe “Ulysses” reached its southern most latitude in its orbit around the Sun during September of 1994.

4. The Ulysses mission was only expected to last for five years but it continued for about eighteen years and ended in 2009.


2 examples from Childrens Toys From The 1990 Page 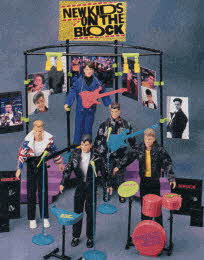 New Kids On The Block Play Figures
Price: $19.99 each
Description They come dressed in their favorite concert fashion outfits. Each includes a fifteen minute cassette tape interview of that particular Kid. Choose from Danny, Donnie, Joe, Jordan, and Jonathan.

The demolition of the Berlin Wall officially begins during June.

More Information for the demolition of the Berlin Wall.

The official demolition of the Berlin Wall begins in June of 1990. The wall had been built in 1961 by the Communist-run East Germany to prevent defectors from traveling over the border to Capitalist-run West Germany. Control of the Berlin Wall ended in November of 1989 when it was announced that East German citizens would be allowed to cross the border with complete freedom. The removal of the wall began in June of 1990 and by October, the reunification of West and East Germany was completed. Demolition on the wall was finished in 1992.

The Leaning Tower of Pisa is closed to the public due to safety concerns of it falling over.

More Information and Timeline for the Leaning Tower of Pisa.

In January of 1990 the Leaning Tower of Pisa is closed to visitors for the first time due to fears over the safety and stability of the building. Engineers worked on restructuring and stabilizing the building by taking some of the weight out of the tower and straightening it by about eighteen inches. By December of 2001 it was reopened to the public and declared to be stable for at least another few hundred years. The Leaning Tower of Pisa had originally been constructed over a span of about 200 years between the 1170’s and the 1370’s and the tilt began to form almost immediately, caused by the building of a poor foundation on too soft of soil.

Other Major Events From 1990

The Saturn range of cars are launched by GM

The US Enters a Major Recession

The National League for Democracy NLD wins free elections by a landslide majority, but the military regime has refused to hand over power.

Ban on the Trade of Ivory

A Formal Ban on the Trade of Ivory is introduced

Industrialized countries agree to stop dumping waste into the oceans of the world.

Margaret Thatcher announces her resignation as British PM after John Major is chosen to lead the country and conservative party.

A stampede of religious pilgrims in a pedestrian tunnel in Mecca on July 2 leaves 1,400 dead

East and West Germany reunite including currency and economies

Philippines, an earthquake measuring 7.7 on the Richter Scale kills over 1600

Prisoners Riot in Strangeways Prison in Manchester, England keeping control of the prison for 25 days

Great Britain is gripped by a heat wave and the highest recorded temperatures in British History are recorded of 37.1C, or 99F in Nailstone, Leicestershire

A 16 megabit chip is shown for the first time

The First Known Case of AIDS is traced back to 1959

The Space Probe Voyager launched in 1977 photographed the Solar System at a distance of 3.7 miles from the SUN

18 years after its launch the US Space Probe Pioneer reaches a distance of 46.5 billion miles beyond all planetary orbits

Depletion of the Ozone Layer is discovered above the North Pole

The First in-car Satellite Navigation System is sold by Pioneer

The Hunt for Red October