The financial crisis and high unemployment continues with house prices still depressed due to the large number of foreclosures. Europe and America begin to pursue different courses to address the problems with Europe addressing budget deficits and the U.S. continuing to try and spend the way out of the recession by creating more jobs.

Winter Olympics are held in Vancouver

More Information for the Winter Olympics.

The Winter Olympics are held in Vancouver, Canada during February of 2010. A total of 2,566 athletes from 82 different countries participated in these games over the course of seventeen days. The countries that won the most medals were Canada, Germany, and the United States. The United States won the highest number of total medals with a total of 37 while the host country Canada won the most gold medals with a total of 14. The event was considered successful despite some minor issues.

More Information and Timeline for Chang'e 2

China launches its second lunar probe "Chang'e-2" on October 1st, 2010. Chang'e-2 successfully completed its missions when orbiting the Moon which included taking high resolution images of the Moon's surface and looking at possible landing sites for an unmanned lunar landing mission. After it completed its mission the Chang'e-2 satellite was successfully guided to the L2 Langrangian point, a special area in space where it will orbit and make scientific observations 1.5 million kilometers from Earth.

The Burj Khalifa skyscraper in Dubai opened during January of 2010 and became the world’s tallest building. The 163 floor tower replaced the Taipei 101 as the tallest building in the world, measuring over 2,700 feet high. It was designed by architecture firm Skidmore, Owings and Merrill, the same company that designed the Willis (Sears) Tower, a former tallest building, and construction began in 2004. A large portion of the building is used for residential purposes but it is also home to a hotel, corporate offices, and a restaurant.

The commercial space flight project SpaceX successfully launched its Dragon capsule in December of 2010. The Dragon capsule launched off of a Falcon 9 rocket and became the first privately created spacecraft to successfully return from low-Earth orbit. The unmanned Dragon capsule, designed to carry cargo and crew, was launched and made two orbits around Earth before landing. The achievement marked a milestone moment for SpaceX and put them closer to achieving their goal of creating a commercially viable space transport program.

Justin Bieber who was discovered through a video placed on YouTube in 2008 continues to dominate the charts around the world attracting millions of fans showing the power of social networking.

Suicide bombers carry out bomb attacks on trains at the central Lubyanka station and the Park Kultury station on the Moscow Metro leaving 40 dead and 60 injured.

A magnitude 7 earthquake hits Haiti and devastates the country

Earthquake measuring 8.8 magnitude occurred off the coast of central Chile ( the 6th largest recorded earthquake in history ) the resulting Tsunami combined the earthquake resulted in the death of over 500 plus immense damage.

BP Deepwater Horizon Oil Spill Disaster in the gulf of Mexico leaves gulf beaches / fishing and the shellfish industry reeling, the true effects will not be fully understood for many years, New Deep Water Drilling Wells are stopped until regulators can catch up with the technology.

Afghanistan US increases the number of troops

Floods in Pakistan caused by higher than normal monsoon rains cause flooding on a scale unseen before with 20% of the country flooded, this leaves millions homeless, starving and causes major disruption to the country.

An Underground Explosion at the Upper Big Branch Mine in Montcoal, Raleigh County, West Virginia leaves Twenty-nine out of the 31 miners underground dead. 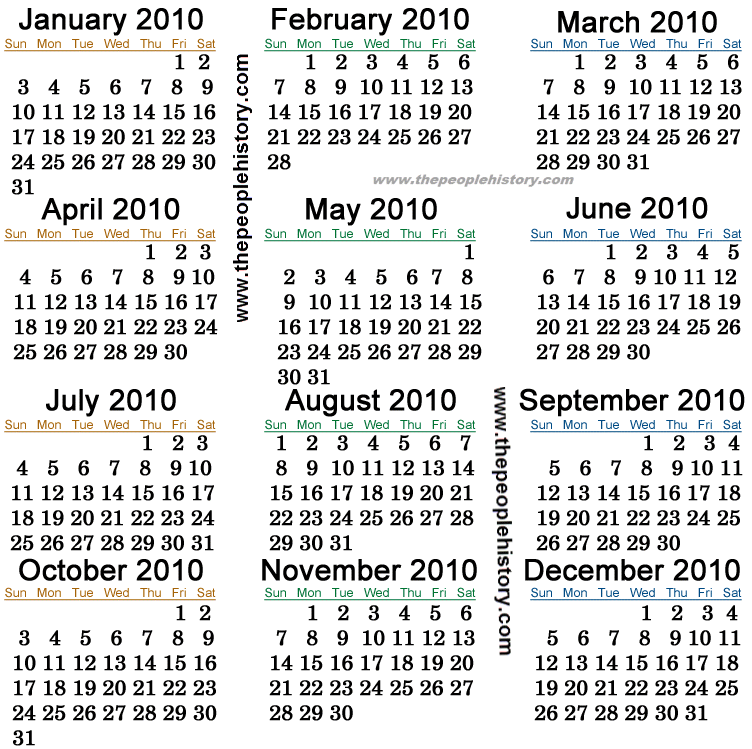