The Games of the XXVIII Olympiad were held in Athens, Greece during August. A total of 10,625 athletes (4,329 women and 6.296 men) from 201 countries participated in 301 sporting and athletic events. These were the first Games in which record-breaking U.S. swimmer Michael Phelps won his first (6) gold medals and set the record for most medals won at a single Games with 8 in total. Several events were held at Ancient Olympic sites and the site of the 1896 Olympics (the first in modern times). These games were also the first to feature women’s wrestling and women’s sabre fencing.

The strongest earthquake in 40 years originates from the Indian Ocean close to Indonesia, measuring 9.3 on the Richter Scale. Creating tsunami waves that sweep across much of the coastlines of Sri Lanka, India, Bangladesh, the Maldives, Burma, Thailand, Malaysia and Indonesia. At least 290,000 people are confirmed to have died from South Asia to as far as South Africa.

After a brief period of inactivity due to a glitch, NASA’s Spirit rover, part of the Mars Exploration Rover (MER) mission, returns to full functionality during February. The Spirit rover was launched in June of 2003 and arrived on Mars early in January of 2004. It suffered an issue with its flash memory that required NASA to send a software patch and reformat its memory. Once it was updated it resumed its scientific mission which included searching for evidence of water on Mars, analyzing rocks and minerals, evaluating the terrain, searching for iron, and assessing if there were ever the conditions to sustain life on the planet. NASA lost contact with Spirit in March of 2010 and officially ended the mission on May 24, 2011.

1. The Cassini-Huygens orbiter and probe entered Saturn’s orbit and took the first close photos of Saturn’s rings during July, 2004.

2. The space craft was launched in October of 1997 and made a seven year journey over 2.2 billion miles.

3. Its mission was to study Saturn’s atmosphere, weather, magnetic fields, moons, and rings.

4. The space craft cost $3.3 billion to build and was one of NASA’s most ambitious and sophisticated projects to date.

5. During December of 2004, Cassini released the Huygens probe which landed on Saturn’s largest moon, Titan.

6. In May of 2008 , Cassini concluded its primary mission but continued to study Saturn and the surrounding area.

The Boston Red Sox win the World Series in baseball for the first time since 1918.

The Boston Red Sox baseball team won their first World Series since 1918 in October of 2004, breaking an eighty-six year championship drought. The team had languished since 1918 with several near wins for the title only to come up short, maintaining the third longest World Series drought on record. Referred to as the “Curse of the Bambino,” some believed the drought was related to the Red Sox’s sale of legendary player Babe Ruth to their rival, the New York Yankees, in 1920.

NASA launches the Gravity Probe B satellite during April. It was launched on a Delta II rocket from the Vandenberg Air Force Base in California and went into a very precise polar orbit. The purpose of the mission was to test two parts of Albert Einstein’s Theory of Relativity, the geodetic effect and frame-dragging. It measured the spacetime curvature near Earth and confirmed the theories by using four very precise gyroscopes to note slight changes that would indicate the gravity of a large object (Earth) was warping space and time and the rotation of it was pulling space and time.

The CIA admits that there was no imminent threat from weapons of mass destruction before the 2003 invasion of Iraq.

The 60th anniversary of D-Day is remembered by world leaders

Hurricane Charley kills 12 people in Florida after killing four in Cuba and one in Jamaica.

Fox Hunting is outlawed in the UK

The Statue of Liberty is reopened to the public

Harry Potter and the Prisoner of Azkaban

The Passion of the Christ

The Day After Tomorrow

Russia Siege at a school

Siege at a school in Beslan, Northern Ossetia. At least 335 people (among which at least 32 of the approximately 40 hostage-takers) have been killed and at least 700 people have been injured.

After striking Grenada, Jamaica and Cuba Hurricane Ivan strikes mainland US with winds in excess of 130MPH causing massive damage and loss of life.

Facebook is launched as a social networking site only open to students from Harvard in February by Mark Zuckerberg with his college roommates and fellow students Eduardo Saverin, Dustin Moskovitz and Chris Hughes. It is expanded first to other colleges in the Boston area and other Ivy League Colleges

Hurricane Jeanne killed over 3,000, most in Haiti.

Ex-soldier John Muhammad is found guilty of one of a series of sniper shootings that terrorized Washington, D.C.,

Taipei 101 currently ( 2007 ) the tallest skyscraper in the world completed 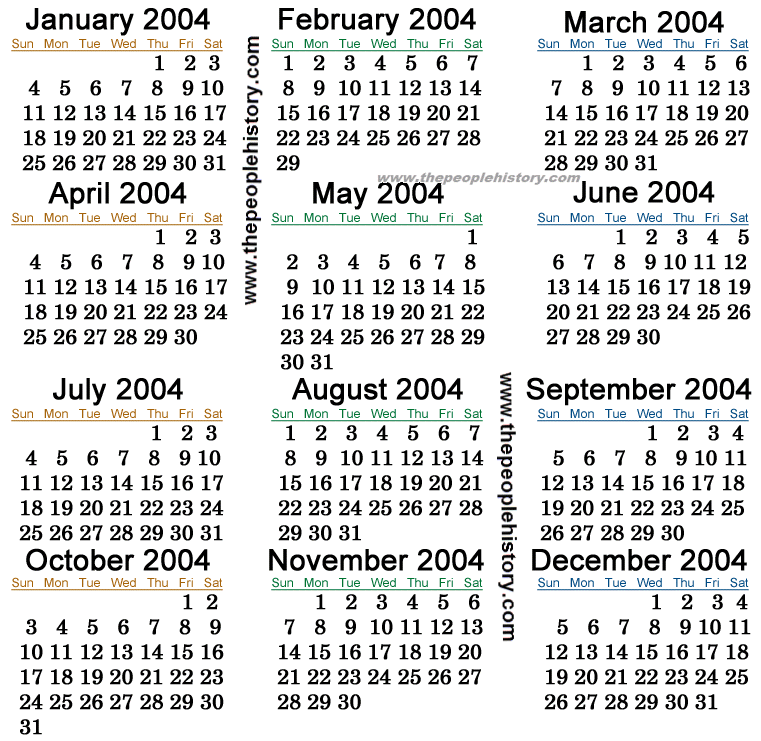 SpaceShipOne becomes the first privately-funded spaceplane to achieve spaceflight. And New funding for the successor SpaceShipTwo comes from British tycoon Richard Branson, who is to fund for his new company Virgin Galactic through a 21 million US$ deal

The Cassini probe passes within 1,200km of Titan and sends detailed pictures of Saturn's Rings.

The official opening of Taipei 101, the tallest skyscraper in the world, standing at a height of 508 metres or 1,676 feet.

The National World War II Memorial opens to the public in Washington D.C.

Remains of a previously unknown species of human is discovered in Indonesia. Named Homo floresiensis

NASA succeeds in a second attempt to fly its X-43A experimental airplane from the Hyper-X project, attaining speeds in excess of Mach 7