What Happened in 1963 Important News and Events, Key Technology and Popular Culture

What happened in 1963 Major News Stories include Start of Beatlemania, Zip codes implemented, Martin Luther King, Jr. delivers his "I have a dream" speech, Members of Ku Klux Klan dynamite Baptist Church in Birmingham, Alabama, Sabin oral Polio Vaccine which is taken with a lump of sugar is given nationwide in US and UK, The Profumo Crisis in the UK, President John F Kennedy assassinated

1963 The biggest news from 1963 was the assassination of the US President Kennedy on November 22 which thrust Lyndon Johnson into the role of president and the murder two days later of Lee Harvey Oswald by nightclub owner Jack Ruby. This was a difficult time to become president with the mounting troubles in Vietnam where the Viet Cong Guerrillas had now killed 80 American Advisers and the continued campaign for civil rights by the black community caused violent reactions from whites including Mississippi, Virginia and Alabama where the black civil rights leader Martin Luther King Jr was arrested. Films included "The Birds" and "The Great Escape" and popular TV programmes "The Virginian" and "Lassie". ladies fashion clothes and hairstyles included fur boots and towering hair do's for evening wear. In music the beginning of Beatlemania after they release "I Want To Hold Your Hand/I Saw Her Standing There" and "Meet the Beatles".

More Information and Timeline For Kennedy Assassination
1. John F. Kennedy assassinated on Friday, November 22nd , 1963, in Dealey Plaza, Dallas, Texas
1a. 1:00 PM CST the 35th President of The United States John Fitzgerald Kennedy is declared dead at Parkland Hospital's Trauma Room
2. Suspects description is given to Dallas Police
3. 13:35 CST Dallas police officer, J. D. Tippit called Lee Harvey Oswald ( Matches Suspects description ) over to the patrol car.
4. Lee Harvey Oswald shot and killed Dallas police officer, J. D. Tippit
5. 13:37 CST Oswald enters a nearby movie theater without buying a ticket
6. 13:40 CST Oswald is arrested by police officer, M.N. McDonald
7. Oswald is charged later that evening with the murder of President John F. Kennedy and Officer J. D. Tippit
8. Jack Ruby murders John F. Kennedy's suspected assassin Lee Harvey Oswald During the transportation of Oswald from Dallas Police Headquarters to the Dallas County Jail on November 24 News Events live on television.
9.President Lyndon Baines Johnson sworn in as President on Air Force One at Love Field Airport in Dallas just over two hours after President Kennedy assassinated
The ten-month investigation by the commission set up by President Lyndon Baines Johnson, The Warren Commission, 1963 - 1964, concluded that the President was assassinated by Lee Harvey Oswald acting alone and that Jack Ruby acted alone when he killed Oswald before he could stand trial Conspiracy theories are still expounded and discussed in books and the media nearly 50 years after the Kennedy Assassination and range from the The Soviet KGB to the United States CIA,

1. Hurricane Flora began as a tropical depression that formed on September 26th near the Cape Verde Islands.
2. By September 30th it achieved hurricane status and was officially named Flora.
3. After it became a hurricane it first hit Trinidad and Tobago and Grenada. For a short moment the storm became a Category 5 hurricane with winds exceeding 170 miles per hour.
4. On October 2nd it hit Haiti as a Category 4 hurricane.
5. October 4th through October 8th the storm hit Cuba where it did a tremendous amount of damage.
6. The storm began dissipating on October 9th.
7. The reports of the death toll vary between about 6,000 and 8,000, making it one of the deadliest hurricanes to hit the Atlantic in the 20th Century. It also did millions of dollars worth of damage and destroyed thousands of homes and buildings throughout the Caribbean.

1. Alcatraz, located in the San Francisco Bay, is first explored by Juan Manuel de Ayala who named it after the pelicans that inhabited the island in 1775.
2. The United States government bought the island in 1849.
3. It was turned into a fort which was used during the Civil War.
4. After that it was turned into a military prison, in 1909 the U.S. Army demolished the fort and began building a prison which was finished in 1912.
5. In 1933 control of the the island was transferred to the United States Department of Justice.
6. The Justice Department turned it into a maximum security prison which began operating on July 1, 1934.
7. The prison at Alcatraz, known as "The Rock," was intended to house the most unruly and dangerous prisoners from other facilities.
8. Some famous inmates included gangster Al Capone, George “Machine-Gun” Kelly, Robert Stroud (known as the Birdman of Alcatraz), and James “Whitey” Bulger.
9. Due to the high cost of daily maintenance and repairs, Alcatraz Federal Penitentiary closes on March 21st, 1963.
10. In November of 1969, a group of Native American protesters claimed the island as native land and demanded that it be turned into a Native American cultural center. The occupation ended in June of 1971 after Federal Marshals removed remaining occupiers from the island.
11. In 1972, the United States Congress established the Golden Gate National Recreation Area which included Alcatraz and the following year it was opened to the public.
12. In 1986 it was declared a National Historic Landmark.

NASA loses contact with the Mariner 2 spacecraft on January 3rd, bringing an end to the successful mission. The Mariner 2 spacecraft had been launched on August 27, 1962. In December of 1962 it became the first mission to successfully observe another planet when it flew past Venus. Before contact was lost, it had transmitted data back to Earth about the temperature, atmosphere, magnetic fields, and radiation of Venus.

USSR - The First Woman in Space

More Information for Vostok 6
The Soviet Union launches the Vostok 6 spacecraft during June . The mission carried cosmonaut Valentina V. Tereshkova as she became the first woman in space. During the mission medical experiments were conducted to test the effects of space travel on a female body and live video of Tereshkova was broadcast on television in the Soviet Union. The flight also involved the Vostok 5 spacecraft which was also in space at the time. The two crafts flew together and communicated with each other by using two-way radio throughout the mission. The Vostok 6 was in space for 3 days, after which it came to an end and Valentina Tereshkova safely returned to Earth.

More Information for ZIP Codes
1. The United States Postal Service launches the ZIP Code System during July of 1963.
2. The name ZIP stood for "Zoning Improvement Plan" and was a system developed to make mail delivery more efficient within the United States.
3. Prior to the ZIP code's roll-out the Postal Service expanded distribution centers and began to assign a five digit code for every address in the United States.
4. Each digit in a ZIP code represents different geographical markers with the first digit representing a general region in the U.S., the second and third for a sectional center, and the last two digits for a local post office or postal zone.

More Information for Mercury-Atlas 9
The final Project Mercury mission, Mercury-Atlas 9, is launched by NASA during May . The Faith 7 spacecraft carried astronaut Gordon Cooper into space for about 34 hours during which he orbited the Earth 22 times. The purpose of the mission was to test the limits of the Mercury space capsule. Cooper's flight was about three times longer than any other human space flight that had been completed at that point in history. It also marked the final time that NASA launched a solo orbital mission. Near the end of the flight Cooper experienced several technical problems but was able to overcome them and successfully returned to Earth.

More Information for President Tito.
The nation of Yugoslavia became the Socialist Federal Republic of Yugoslavia in April and the country's leader, Josip Broz Tito, was named as the "President for Life." The changes to the European nation's name and Tito's authority were a part of several socialist reforms added into the country's constitution during that year. With his increased authority, Tito relaxed many religious and political restrictions and helped to improve the economy by encouraging foreign tourism and the expansion of private enterprise. Tito was generally liked by the people and was commended for going against Soviet-era communism and developing a successful form of socialism. Tito died in 1980 and the Socialist Federal Republic of Yugoslavia broke up in 1992. 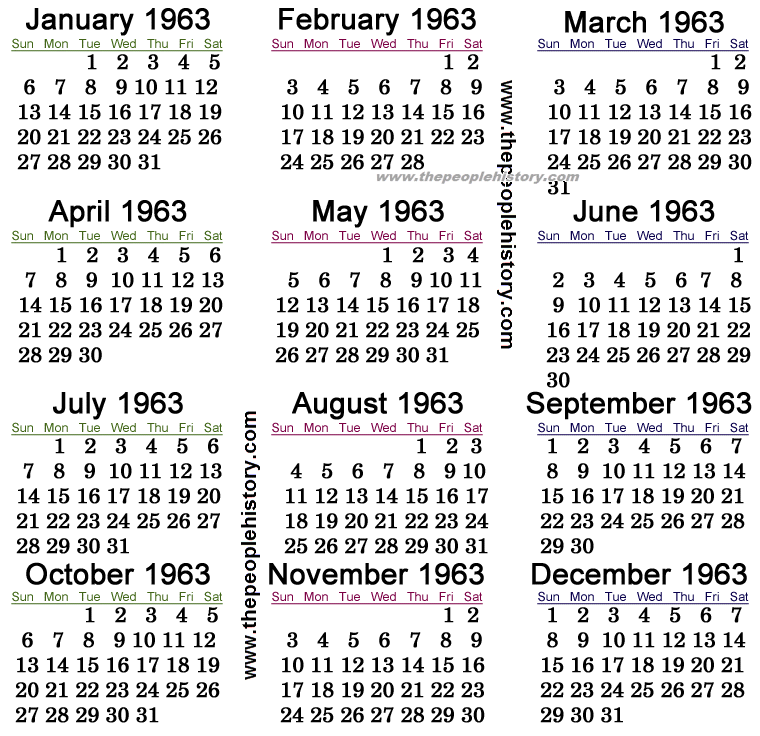 Part of our Collection of Toys From 1963

More News and Key Events From 1963

This was the year an Insurance firm State Mutual Life Insurance invented the Smiley Face found on anything and everything around the world including T Shirts , it's popularity was at it's peak in the 1960's


Inventions Invented by Inventors and Country ( or attributed to First Use )
Tape Cassette Netherlands ( Philips ) used to record and play audio
Pull Tab Can As Used For Soda U.S.A. Alcoa Company