What Happened in 1968 Important News and Events, Key Technology and Popular Culture

1968 In both Europe and America Japanese imported cars and other goods were continuing to rise and trouble the governments of UK and USA as they worried about industries in their own countries being effected and jobs lost. In the spring of 1968 on 4th April The Rev Martin Luther King was assassinated and Robert Kennedy was mortally wounded when he is shot by Sirhan Sirhan. The peace movement had continued to grow and more and more Americans were against the war in Vietnam, and once again more riots occurred throughout cities in America. The music scene was once again set by the "Beatles" and the "Rolling Stones" , and fashion flirted with see through blouses and midis and maxis skirts joined the Mini Skirt as part of the fashion trends. There is a Flu Pandemic in Hong Kong and the first Black power salute is seen on Television worldwide during an Olympics medal ceremony

More Information and Timeline For Prague Spring in Czechoslovakia
1. January 5th Alexander Dubcek becomes the First Secretary of the Communist Party of Czechoslovakia
2. April 5th Alexander Dubcek and the Communist Party of Czechoslovakia call for the acknowledgment of individual liberties, the introduction of political and economic reforms, and a change in the structure of the nation. "Action Programme"
3. April 5th "Action Programme" includes proposed reforms to limit the power of the secret police and formal abolishment of censorship
4. June 26th Following formal abolishment of censorship anti-Soviet editorials appear in the press
5. August 20th and 21st Eastern Bloc armies consisting of 200,000 troops and 2,000 tanks from four Warsaw Pact countries - the Soviet Union, Bulgaria, Poland and Hungary invade Czechoslovakia / CSSR
6. August 21 Dubcek and other reformers are taken into Soviet custody and flown to Moscow
7. August 26th Dubcek and other reformers accede to Soviet demands and sign the Moscow protocols promising to protect socialism in Czechoslovakia
8. August 28th Dubcek and most of the reformers were returned to Prague
Dubcek was forced to resign as first secretary in April 1969 and for the next few years a process of Normalization which included the Removal of reforms implemented in 1968 and those who had been instrumental in the reforms from the Communist Party of Czechoslovakia, mass media, judiciary, social and mass organizations. Economic enterprises, which had been given substantial independence during the Prague Spring were bought back into centralized control. Freedom of the Press Act revoked etc.

More Information and Timeline For The Life and Death Martin Luther King Jr.
1. 1929 January 15th Born in Atlanta, Georgia, United States
2. 1948 Graduated from Morehouse College with a Bachelor of Arts degree in sociology
3. 1951 Graduated with a Bachelor of Divinity degree from Crozer Theological Seminary in Chester, Pennsylvania
4. 1953 June 18th Marries Coretta Scott on the lawn of her parents' house in her hometown of Heiberger, Alabama
5. 1954 Martin Luther King Jr. becomes pastor of the Dexter Avenue Baptist Church in Montgomery, Alabama
6. 1955 Following the arrest of Rosa Parks for refusing to give up her seat to make room for a white passenger Martin Luther King Jr. leads the Montgomery Bus Boycott which lasted for 385 days to oppose the city's policy of racial segregation on its public transit system.
7. 1957 Martin Luther King Jr. becomes president of the Southern Christian Leadership Conference (SCLC)
8. 1959 Martin Luther King Jr. visits Gandhi's birthplace in India where he affirms his commitment to non-violent resistance and America's struggle for civil rights.
7. 1963 Martin Luther King, Jr. leads a nonviolent direct action protest in Birmingham, Alabama to defy discrimination laws they considered unfair.
8. 1963 August 28th King, representing SCLC, was among the leaders of the so-called "Big Six" civil rights organizations who were instrumental in the organization of March on Washington for Jobs and Freedom, it was the largest political rally for human rights in United States history .
9. 1963 August 28th Martin Luther King, Jr. delivered his historic "I Have a Dream" speech advocating racial harmony at the Lincoln Memorial to an estimated crowd of 250,000
10. 1965 March 25th Martin Luther King, Jr. at the end of the third Selma to Montgomery march delivered the speech "How Long, Not Long." on the steps of the State Capitol Building to a crowd of 25,000
11. 1967 April 4th Martin Luther King, Jr. during a speech at the New York City Riverside Church spoke strongly against the U.S.'s role in the war, insisting that the U.S. was in Vietnam "to occupy it as an American colony"
12. 1967 After his speech against the Vietnam War many supporters of Martin Luther King, Jr. including President Johnson, union leaders and powerful media publishers began to line up against him.
13. 1968 April 4th Martin Luther King, Jr. is shot and killed by James Earl Ray
The assassination of Martin Luther King Jr., leader of the Civil Rights Movement, takes place in April of 1968 when he was killed by James Earl Ray. King's assassination leads to violence and race riots in U.S. cities.

U.S. Senator Robert F. Kennedy, also known as Bobby Kennedy or RFK, was assassinated at the age of 42 on June 5th. Kennedy was shot three times by Sirhan Sirhan, a Palestinian, at the Ambassador Hotel in Los Angeles. He had just finished giving a speech after his victory in California’s presidential primary. Senator Kennedy died the following day and was buried at Arlington National Cemetery in Virginia near the grave of his brother, President John F. Kennedy who had been assassinated on November 22 News Events, 1963. Sirhan Sirhan was sentenced to death in 1969, his sentence was later commuted to life in prison.

Anti-Vietnam war demonstrations turn violent during March in London, England. Between 8,000 and 10,000 protesters marched from Trafalgar Square to the United States Embassy in Grosvenor Square. According to attendees, the initial mood of the gathering was positive but quickly turned violent when they encountered hundreds of police surrounding the embassy. About 200 people were arrested during the riots and between 80 and 100 people, including several police, were injured.

More Information for the founding of Intel.
The Intel Corporation was founded in Santa Clara, California during July . Engineers Gordon Moore and Robert Noyce created the company after receiving $2.5 million in funding from venture capitalist and financier Arthur Rock. Noyce and Moore set out to build a company that could make and develop semiconductor computer circuits like the ones they had invented at their former employer, Fairchild Semiconductor, in the 1950's. Intel began producing memory chips as their primary product with great success until their engineers created the first microprocessor in 1971, changing the course of technology and computing forever. Since then, Intel has been one of the top companies in the world and has remained a leading innovator.

NASA launches the Apollo 7 mission on October 11th. It was the first manned mission in the Apollo program which was created with the ultimate goal of landing a man on the Moon. The purpose of the mission was to test out the command and service module (CSM). It launched from the Kennedy Space Center in Florida and carried astronauts Walter Schirra, Donn Eisele, and R. Walter Cunningham around the Earth’s orbit 163 times. The flight lasted 10 days and 20 hours and it was the first mission to complete a live television broadcast.

NASA’s Apollo 8 space mission was launched on December 21st. It was the first manned mission to leave Earth’s orbit, orbit the Moon, and return to Earth safely. The crew consisted of Frank Borman, James Lovell Jr., and William Anders. It was also the first manned mission to launch from the Kennedy Space Center. The crew successfully landed in the Northern Pacific Ocean after just over six days in space. Apollo 8 was most well-known for the live television broadcast made by the astronauts on Christmas eve. The mission was a critical step in the process to land a man on the Moon.

NASA launches the final Surveyor mission, Surveyor 7 on January 7th. The mission objectives for Surveyor 7 were to achieve a soft landing on the surface of the Moon in the highland area, photograph the area after landing, test the chemical composition of the soil, and gather data related to the mechanics of the landing. The spacecraft was successful in its landing and achieved its mission objectives. The surveyor program was overall successful as well, providing the necessary data to determine the feasibility of a manned Moon mission.

More Information and Timeline for The Beatles White Album
On November 22nd the popular rock band the Beatles released the "White Album," an untitled double album that featured some of the legendary band's most experimental music. Many of the songs were written when the band was in Rishikesh, India while they were attending a meditation camp. While the album received mixed reviews at the time, it still reached the number one spot on the music charts in both the United Kingdom and United States. Modern critics mark the album as on of the best albums ever created and it remains popular today.

1. US political parties hold their conventions to formally choose presidential candidates during August.
2. The Democratic National Convention is marked by violence as rioting erupts live on television after police are given orders by Chicago Mayor Daley to forcefully disperse peaceful anti-Vietnam war protesters.
3. During the convention, Democrats had limited options as President Lyndon B. Johnson decided not to run and candidate Robert F. Kennedy was assassinated in June.
4. They chose sitting Vice President Hubert Humphrey as the Presidential nominee and Senator Edmund S. Muskie for Vice President.
5. In a more muted affair, the Republican National Convention was held in Miami Beach.
6. The Republican delegates chose Richard M. Nixon, former Vice President under Eisenhower, as the presidential nominee and Spiro T. Agnew, Governor of Maryland, as the Vice Presidential nominee.

The Soviet Union launches the Zond 5 space mission during September. The unmanned spacecraft became the first to circle the Moon and successfully return to Earth intact. It was also the first mission to carry life to the Moon and back. There were various forms of life on board the spacecraft including wine flies, mealworms, plants, bacteria, and two tortoises. The creatures survived the nearly week-long journey. Later in the year the United States would successfully complete the Apollo 8 mission which carried Frank Borman, James Lovell, and William Anders to orbit the Moon and return to Earth as the first humans to travel beyond the orbit of the Earth.

More Information for General Strike in France
French students begin protesting France's university system and limited job opportunities during May . After a series of conflicts between the students and the police, millions of French workers joined the students in a general strike to show solidarity. The students called for reforms to the economy and the protests brought the entire country to a halt. President Charles de Gaulle tried to negotiate with the protesters and eventually dissolved the National Assembly to call for new elections to be held in June. The protests eventually waned after a few weeks but they were able to achieve some of their goals including the passage of an education reform law for students and better wages and work conditions for workers. 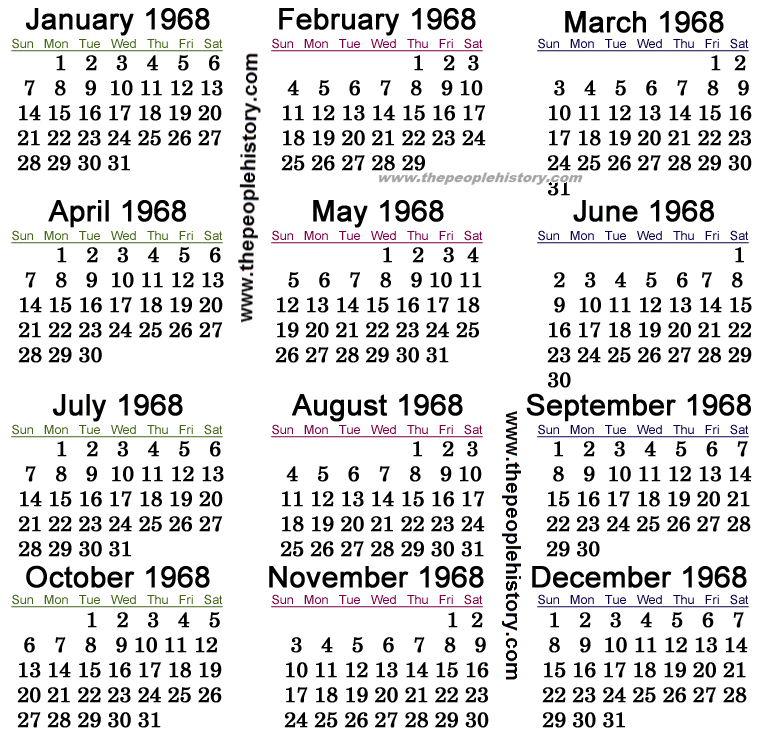 Part of our Collection of Toys From 1968

More News and Key Events From 1968