What Happened in 1961 Major Events, Popular Culture, Prices, Born This Year 60 years ago

1961 The cold war continued to worsen with the USSR exploding some very large bombs during testing and then masterminding the building of the Berlin Wall separating East from West Berlin, America sent a battle group to Germany and Americans and Russians Glared at each other across the border, due to this uncertainty many Americans built backyard fallout shelters in case of nuclear war. To make matters worse the Americans financed anti-Castro Cubans for an invasion at the bay of pigs which was an unmitigated disaster. The Soviets put the first man in space on April 12 Yuri Gagarin followed by the US in May with Alan Shepard. Popular music included Chubby Checker's "Pony Time" and "Will You Love Me Tomorrow" by the Shirelles, and top movies included "West Side Story" and "The Parent Trap."

More Information and Timeline For Bay of Pigs

2. 1959 - 1960 Cuba Declares It is a now a Communist country and Nationalizes Land and Businesses including U.S. assets totaling $1 billion

This has to be one of the worst planned and executed invasions in modern times poorly thought out, as a covert operation it was a bust with Cuban and Soviet Forces knowing almost to the day where and when the operation would occur.

More Information and Timeline For The Early Space Race

2. 1957 November 3rd The Soviet Union puts Sputnik 2 the worlds first spacecraft to carry a living animal, a dog named Laika into orbit around the earth.

3. 1958 January 31st The United States puts it's first satellite into space the Explorer 1

4. 1959 September 14th The Soviet Union launches first spacecraft to reach the surface of the Moon Luna 2

6. 1961 May 5th The United States launches it's first man in space Alan Shepard on the Freedom 7

7. 1961 President Kennedy asks Congress for $531 million to put a man on the moon before the end of the decade

If you look at the timeline for space travel up to this point the The Soviet Union was consistently one step ahead of the United States, but following the speech by President Kennedy on May 25 the United States was determined to be the first to put a man on the moon which they achieved on July 20 News Events 1969 when Apollo 11 landed Neil Armstrong and Edwin "Buzz" Aldrin, Jr, who became the first human beings to walk on the Moon's surface.

East German Authorities close the border between east and west Berlin and Construction of the Berlin Wall begins.

2. 1961 20% of the entire East German population leave and defect for West Germany including a high percentage of engineers, technicians, physicians, teachers, lawyers and skilled workers

3. Following the large defection of professionals from East Germany a decision to build a wall securing the border is confirmed by Soviet and East German leaders

5. August 17 First concrete elements and large blocks being put in place to create the Berlin Wall

7. Nine border crossing points between East and West Berlin including Checkpoint Charlie at the corner of Friedrichstrae and Zimmerstrae, which was restricted to Allied personnel and foreigners

8. 1989 The separation of East and West Germany ends as the Berlin Wall is taken down leading to eventual German reunification on October 3rd 1990

The Berlin Wall was a good example how society was effected by the Cold War which existed between the East and West following the end of World War II up to the nineties.

U.S. President John F. Kennedy establishes the Peace Corps during March. Kennedy issued Executive Order #10924 which created the group as an agency within the State Department. The Peace Corps works to train young Americans in community development efforts and then deploy them around the world as helpful volunteers in developing countries. Their intended goal was to promote democracy, freedom, and peace by building positive American influence around the world, acting as a counter-effort against Soviet groups promoting communism during the Cold War.

The World Wildlife Fund (WWF) was officially founded and opened its first office during September . The World Wildlife Fund was created by the world's top conservationists as a means to organize and collaborate on conservation fundraising throughout the globe. The WWF used its influence and resources to bring public awareness to conservation issues with the goal of lessening humanity's impact on natural wildlife habitats and preserving endangered species. Since its founding, the WWF has become the world's largest conservation organization.

Cost of a gallon of Gas 27 cents

The farthing coin, used since the 13th century, ceases to be legal tender in the United Kingdom.

The Pony become a popular dance

The Guns of Navarone

John F. Kennedy was sworn in by Chief Justice Earl Warren as the 35th President of the United States during January . Kennedy, the youngest person to be elected president at the time, was also the first Catholic president. He was a decorated World War II veteran who had served in Congress as a member of the House of Representatives and a Senator from Massachusetts and came from a family that had been previously involved in politics. JFK’s inauguration was notable for his memorable speech which featured the imploration to his fellow citizens, “ask not what your country can do for you, ask what you can do for your country.” Kennedy would remain as the U.S. President until he was assassinated in November of 1963.

The USSR tests the "Tsar Bomba," the largest nuclear bomb ever.

More Information for the Tsar Bomba

1. The Soviet Union conducts the largest ever nuclear bomb test despite worldwide objections during October .

2. The "Tsar Bomba" also known as the "Kuzkina mat" and "Big Ivan" was detonated over the Novaya Zemlya island in the Arctic.

3. The strength of the blast was equivalent to about 50 megatons (over 50 million tons of T.N.T.) and registered as a 5.0 on the Richter scale.

4. Light from the blast was seen over 600 miles away from the detonation site.

5. The "Tsar Bomba" was the largest and most powerful man-made weapon ever created and just a few years after the test the United States, Soviet Union, and the United Kingdom signed the Partial Nuclear Test Ban Treaty, banning all nuclear tests conducted anywhere but underground.

NASA launches the Mercury-Atlas 5 (MA-5) mission during November . MA-5 was the final test mission prior to beginning manned missions by the United States. The space capsule carried a chimpanzee named Enos aboard. While in space, Enos performed a few tasks to test his psychomotor capabilities. The spacecraft made 2 orbits around Earth and the flight lasted about 3 and a half hours. After the capsule splashed down it was recovered with Enos was alive and in good condition.

More Information for the film Babes in Toyland

The film "Babes In Toyland" premieres during December . "Babes In Toyland" was created by Walt Disney and was the first live action musical to be produced by the company. The film, starred Ray Bolger, Tommy Sands, Ed Wynn, and Annette Funicello. The Mother Goose themed musical focused on the evil character of Barnaby's plot to derail the upcoming marriage between characters Tom and Mary in an attempt to further his own romantic agenda. Despite heavy promotion the film was considered a flop for Disney but it did receive two Academy Award nominations for Best Costumes and Best Music.

The Soviet Union launches the Venera 1 space probe during February . The unmanned probe was the first spacecraft to fly by Venus. The Venera 1's mission returned some data back to Earth verifying the presence of plasma in space, but it was ultimately a failure as contact with the probe was lost within about a week of its launch. It did not transmit any data back about Venus when it passed by the planet. The Soviet Union launched a total of 16 Venera probes and many succeeded in providing detailed data and images of Venus.

More News and Key Events From 1961

Britain applies for membership of the EEC

Segregation on railways in the south ends

The Peace Corps is established by John F. Kennedy

The Xingu National Park is created in Brazil

John F. Kennedy inaugurated as President of the United States

Members of The UK Portland Spy Ring are found guilty of selling plans of the HMS Dreadnought, Britain's first nuclear submarine to the Russians

U.S. -- 23rd Amendment to the Constitution

The 23rd Amendment to the Constitution is Ratified which permits electors in the District of Columbia to choose Electors for President and Vice President.

During the Monza Italian Grand Prix Race Baron Wolfgang von Trips Ferrari crashes off the track onto embankment filled with spectators killing 14 plus the driver.

Yuri Gagarin is the first human in space.

The First inflight movie is shown on TWA

The first quasar is discovered by Allan Sandage at Mt Palomar, California 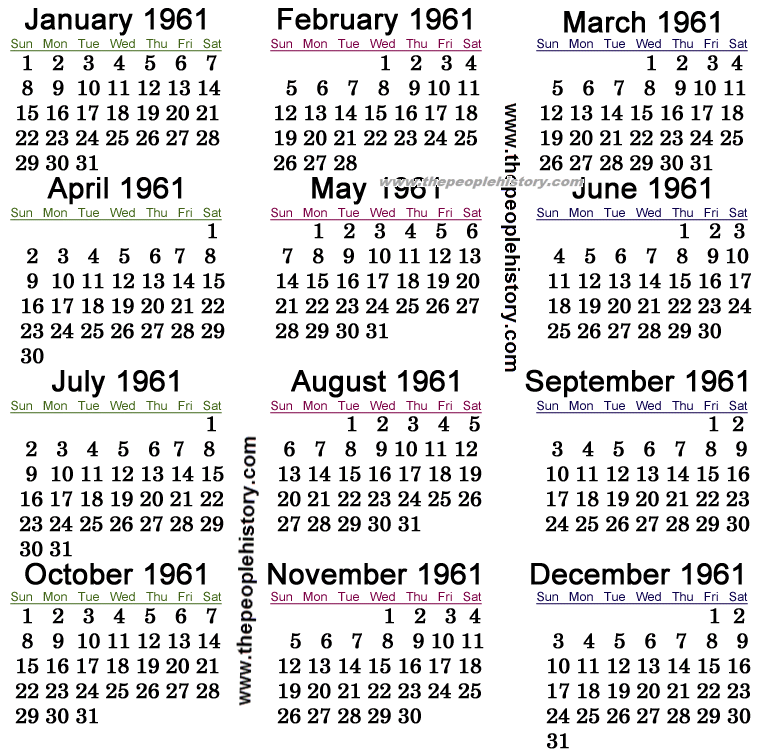