9 May, 2010 Iceland Flights Cancelled Due to Volcanic Ash

2010 : Hundreds more flights are cancelled due to volcanic ash disrupting the atmospheric conditions over Europe. Ash clouds from an Icelandic volcano forced the cancellation of many flights to and from Europe and many airports around the continent were forced to close, including sixteen airports in Spain alone.

1933 : 61 people have died as Tornado's strike Kentucky and Tennessee leaving a trail of death and destruction in their wake, among the worst hit are areas of Louisville.

1934 : The West Coast Longshoremen's Strike begins when Int’l. Longshoremen’s Association (ILA) union workers demand a 6 hr working day, more men on each gang, lighter loads and an independent union. They shut down seaports in Washington, Oregon and California for 3 months.

1960 : The Food and Drug Administration approved the first pill for contraceptive use in Birth Control, called Envoid. The pill is a mix of of an estrogenand a progestin and is now used by by more than 100 million women worldwide.

Known For : Billy Joel American musician, singer-songwriter, and composer. Commonly nicknamed the "Piano Man" after his first single in North America and signature song of the same name ( Released November 2, 1973. ) . He is one of the best-selling music artists of all time and the fourth best-selling solo artist in the United States, with over 150 million records sold worldwide

1994 : The first cases of the Ebola Virus in the latest outbreak in Gabon, are identified which cause the death of 9 of those infected with the virus.

A Further Ebola Virus epidemic occurs in Kikwit, the Democratic Republic of the Congo in 1995 with 315 cases, 250 of which had fatal outcomes.

The strain of Ebola which broke out in Zaire (Democratic Republic of the Congo) has one of the highest case fatality rates of any human pathogenic virus, at roughly 90%.

1925 : Rum runners were chased today by the Coast Guard and were forced to dump 100 cases of Liquor in the Delaware River as part of the Rum War between smugglers and Coast Guard, after dumping the booze the smugglers managed to escape the Coast Guard.

1926 : Commander Richard Byrd and his companion the first to fly an airplane to the North Pole ( Later Disputed ).

1944 : Like most of the countries throughout the world war rationing is in effect for everything from tires to Red Meat.

1944 : Jimmie Davis becomes the Governor of Louisiana. He wrote the song "You Are My Sunshine." He became famous for recording secular and religious songs and also served two nonconsecutive terms as the governor. He lived to be over 100 years old and also has the distinction of living longer than any other United States governor.

1953 : Calls for the federal government to take on the Mob / Crime Syndicate / The System after the murder of a longshoreman. The Mob makes money from Prostitution, Gambling, Loan Shark, Narcotics and The Waterfront and calls are rising daily for federal action as they appear to be immune from the law due to local politicians protection.

1956 : A British naval diver ( Commander Lionel "Buster" Crabb ) goes missing and is later found dead during a Goodwill Visit by a Soviet cruiser carrying Soviet leaders Nikita Khruschev and Marshal Nikolai Bulganin. At the time no one would admit that he was spying on the Russian Cruiser on a spying mission for MI6 and had dived under the cruiser to check out the hull and any other information he could find. And it still remains a mystery on how he died.

Known For : Rosario Dawson is a popular actress who started her career as a teenager by appearing in the controversial 1995 film "Kids." She built her career as a versatile actress appearing in both independent films and notable blockbusters. She is known for her appearances in Rent, Sin City, Clerks II, and Men in Black II. She is also well-known for her politics and activism, having been arrested in protests in 2004 and 2016. 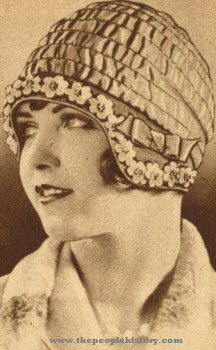 From Our 1928 Ladies fashion Page


Fashionable style and beautiful material combine to make this one of our loveliest dresses for the small woman. It is made of crepe-back satin, the satin side out, and for trimming it uses the reverse or crepe side. One long scarf-end hangs from the right shoulder. The inset yoke at the neckline and again at the waistline, the narrow cuffs, the insets in the sleeves and in the scarf, are of the reverse side of the satin. Fancy buttons trim front of bodice. Cluster of flowers on the left shoulder.

1965 : Some of the films showing in movie houses provide an idea of the strength of the film industry in this year: Mary Poppins, The Great Escape, Becket, and Its a Mad Mad Mad Mad World.

1970 : About 100,000 war protesters gathered just south of the White House to express their opposition to involvement in the war in Cambodia.

1976 : A Sabena Boeing that was hijacked after leaving Vienna with 90 passengers and 10 crew that had been held hostage for 23 hours at Lod airport in Tel Aviv is stormed by Israeli soldiers disguised as maintenance staff who killed two of the Arab hijackers and released the passengers and crew.

1979 : A protest by anti-government protesters at the Metropolitan Cathedral in San Salvador, ends in a bloodbath when police opened fire killing 18 and injuring many more.

1988 : The continued fighting between Syrian-backed Amal militia and the pro-Iranian Hezbollah for the control of Southern Beirut has claimed the lives of over 150 including many civilians caught in the crossfire.

1994 : South Africa's newly elected parliament chose an unopposed Nelson Mandela to be the country's first black president. He will be sworn in at an official ceremony next week.

1997 : Andrew Cunanan already on the FBI Ten Most Wanted List kills William Reese, 45, a cemetery caretaker, while attempting to steal his Chevrolet pick-up. Andrew Cunanan was already wanted for the murder of David Madson, Jeffrey Trail and Lee Miglin. On July 15th, he killed famous fashion designer Gianni Versace outside his South Beach mansion and one week later when he believed he was about to be captured committed suicide.

2001 : During a soccer match at Accra Stadium in Ghana, following problems with local soccer fans and police a stampede by fans causes the deaths of 126 supporters.

2005 : The Thorp processing plant in Sellafield experienced a leakage of about twenty tons of nuclear material. The dangerous materials leaked through a crack in a pipe but were contained and did not impose a risk to the public, however the estimated cost to repair the damage was expected to fall heavily on taxpayers.

2006 : The European country of Estonia became the fifteenth country to ratify the European Union Constitution. The vote to ratify the treaty passed nearly unanimously with seventy three voting for ratification and one against in the Estonian parliament.

2007 : Six foreign men were arrested for planning an attack on the Fort Dix army base in New Jersey. The FBI infiltrated the group after being alerted of suspicious video footage by a video store. The footage had shown a group of men chanting and firing weapons and the video store was asked to make copies of the video.

2011 : An Austrian court decided to deport Croatia's former Prime Minister, Ivo Sanader, back to Croatia to face charges of corruption. Sanader's attorneys filed for an appeal and the former prime minister was set to stay in Austrian custody until a decision was made on the appeal. Ivo Sanader was in power from 2004 until 2009 and is suspected on charges of embezzlement and abuse of power, however, he denied the charges, stating that they were politically motivated.

2012 : President Barack Obama stated that he supported same-sex couples and believes that they should be able to marry. Vice president Joe Biden and cabinet member Arne Duncan had also came out in support of same-sex marriage previously. His announcement of this position marked the first time a sitting US president had publicly been in favor of the controversial topic.

Known For : Ken, who is known as 'Monkeyman,' has been drifting since 2001. He came 2nd in the 2006 and 2008 D1 Grand Prix Championships, and won the D1 Grand Prix Non Championship Event World All Star in 2006. For 'drifting' please note that it is a Japanese motorsport that uses traction loss to navigate its turns.