What Happened in 1944 Important News and Events, Key Technology and Popular Culture

1944 On June 6th the D-DAY invasion ( Operation Overlord ) starts with allied forces crossing the English Channel to land in Normandy which signaled the end of the war in Europe. Meanwhile London had the first attacks from V2 rockets , which caused further devastation to an already badly bombed city. Glenn Miller is reported missing following a plane crash and people throughout the US and UK are encouraged to grow any vegetables they can in gardens to help ease the food shortages.

What Events Happened in 1944

Operation Overlord, code named D-Day, commences with the landing of 155,000 Allied troops on the beaches of Normandy in France.

More Information and Timeline for the Liberation of France

1. France falls under German control in 1940 at the beginning of the war.

2. The efforts to free France from Nazi occupation begin in June with the D-Day invasion of Normandy when Allied troops land on the beaches and start to make their way towards Paris.

3. More Allied troops land in southern France on August 15, and make their way towards the Rhine river.

4. As the Allies make their push towards Paris, French resistance fighters begin an uprising in Paris.

5. By August 25th, the Allies and Free French forces enter Paris and by the end of the month the French government is handed over to the Free French troops.

6. Before the end of the year France is liberated from Nazi control and occupation.

2. The siege began on September 8th of 1941 when the city was surrounded by German and Finnish troops.

3. The city was blockaded and roads and trains were cut off. Leningrad was defended by about 200,000 Soviet troops.

5. Over one million people died, primarily from starvation, and it turned into one of the longest and most devastating sieges in history.

Examples of a couple of Houses for sale

Allied troops attempt the largest airborne military operation in history (at the time) when the Battle of Arnhem (Operation Market Garden) begins on September 17th, . The purpose of this operation was for Allied paratroopers to land in the Netherlands and take control of key bridges near the Rhine river from German forces. This was so that Allied troops could push through Germany and end the war much more quickly if successful.

Unfortunately, for the Allies, German troops were aware of their arrival ahead of time and had the time to organize against them and destroy many of the bridges prior to the paratroopers' landing. Some Allied forces made it to the Arnhem bridge but they were short on supplies and forced to abandon their plans, leaving Germany in control of the Rhine river at that time.

This mission was a fairly large failure for the Allies and many troops were killed and taken prisoner by the German troops.

The GI Bill of Rights is passed and signed into law by Franklin D. Roosevelt on June 22nd

The Battle of Leyte Gulf takes place during the month of October . The main battle took place between October 23rd and 26th and was considered one of the largest naval battles in world history. United States, Australian, and Filipino forces began the invasion of Japanese occupied Philippines by landing in the Leyte Gulf. The Japanese suffered heavy losses to their navy and it marked their first kamikaze aerial attacks. The Allies won the battle and their victory lead to the liberation of the Philippines. This was a turning point in the war against Japan as it effectively cut off their supply route in Southeast Asia and was a devastating loss to their naval forces with many of their ships destroyed and thousands killed.

Mahatma Gandhi is released from jail.

Indian Independence activist and leader Mahatma Gandhi was released from jail in May . Gandhi had been arrested in August of 1942 after encouraging civil unrest and uprisings against the British at the height of World War II. Not long after his release, a failed assassination attempt was made on his life. Gandhi would live to see India achieve independence in August of 1947 but was soon killed after a successful assassination less than a year later in January of 1948 at the age of 78.

London is hit by a V2 rocket for the first time.

Europe Battle of the Bulge

The Battle of the Bulge beginning on December 16th h is one of the deadliest battles in World War II with 19,000 US soldiers killed.

More Information and Timeline for the Battle of the Bulge

In December , the Germans attempted to surprise the Allied armies as they traveled through the Ardennes. The German objective was to split the Allies up in a surprise attack. The battle began on December 16th and continued until late January of 1945. As the Allies regrouped to fight back against the German attack, the line of defense took on the shape of a bulge, hence the name "Battle of the Bulge." The Allies were caught off guard in the attack and tens of thousands of soldiers were lost in fierce fighting (estimated up to 100,000 casualties) during what was considered the bloodiest battle of World War II for the United States. Despite the losses the Allies were successful in neutralizing the German offensive and preventing Germany from recapturing Antwerp. As well as massively depleting German fuel and supply reserves.

US Forces liberate Rome and Italy

More Information for the "Great Escape"

During March , 76 Allied prisoners of war escaped from the Stalag Luft III prison camp in Nazi Germany. The plot was masterminded by British Royal Air Force (RAF) pilot Roger Bushell and beginning in April, 1943 hundreds of prisoners secretly built a 300 foot tunnel under the camp and code-named it "Harry." They also dug two other tunnels that were later abandoned. Using scavenged items for tools, the tunnel turned out to be quite sophisticated and well concealed. They also created fake papers and handmade civilian clothing to aid them in leaving the country undetected. Of the 76 escapees, 73 were eventually recaptured. The three successful prisoners were Norwegian pilots Per Bergsland and Jens Muller, and Dutch pilot Bram van der Stok.

The second Battle of Guam starts on July 21st

The second Battle of Guam begins on July 21st, when American troops fought Japanese troops to retake the island. Guam had been held by the United States since 1898 but it was captured by Japan on December 10th, 1941. During the battle the Japanese took heavy losses and the island was eventually secured by American forces on August 10. After control of Guam was taken over by the United States, thousands of Japanese soldier remained, some in hiding. One soldier was found to be alive and hiding in a cave in 1972, nearly 30 years after the battle ended.

The Republic of Iceland is founded during February. The Icelandic parliament decided to sever ties between Iceland and Denmark and proposed a referendum to determine the nation’s future. The referendum was held in May of that year and citizens overwhelmingly voted in favor of severing ties with Denmark and established a republic. There was 98 percent turnout and over 90 percent voted in favor of both criteria. The country’s official celebration of independence came in June when the republic was formally created and its first president, Sveinn Bjornsson, took office.

The World War II Battle of Hollandia, also known as Operation Reckless, began on April 22nd. Fighting between the Japanese and United States forces ended in an Allied victory when US forces made an amphibious landing in New Guinea. The operation was a huge success for the US and it resulted in the withdrawal of Japanese forces from eastern New Guinea. The battle was just one in a series of coordinated efforts by the Allies to take control of the South Pacific.

Franklin D. Roosevelt becomes the only U.S. president to be elected to a fourth term.

1. President Franklin Delano Roosevelt is elected to a fourth term as the president of The United States.

2. The election took place on the 7th of November, . The incumbent president ran against his Republican rival Thomas E. Dewey.

4. Despite his decisive victory, this election was the closest out of his four total presidential elections.

5. This was FDR's last term as the president of the United States as he died in office in April of 1945.

6. Soon after FDR's death, the 22nd Amendment was passed by Congress to limit presidential terms to two.

7. The amendment was finally added to the U.S. Constitution in February of 1951.

( he was trying to invent something to protect soldiers in the Second World War from Sunburn ). He then went on to create the Coppertone Company and the rest as they say is history

The Siege of Leningrad is finally broken after 872 days

In Britain the Education Act lifts the ban on women teachers marrying. 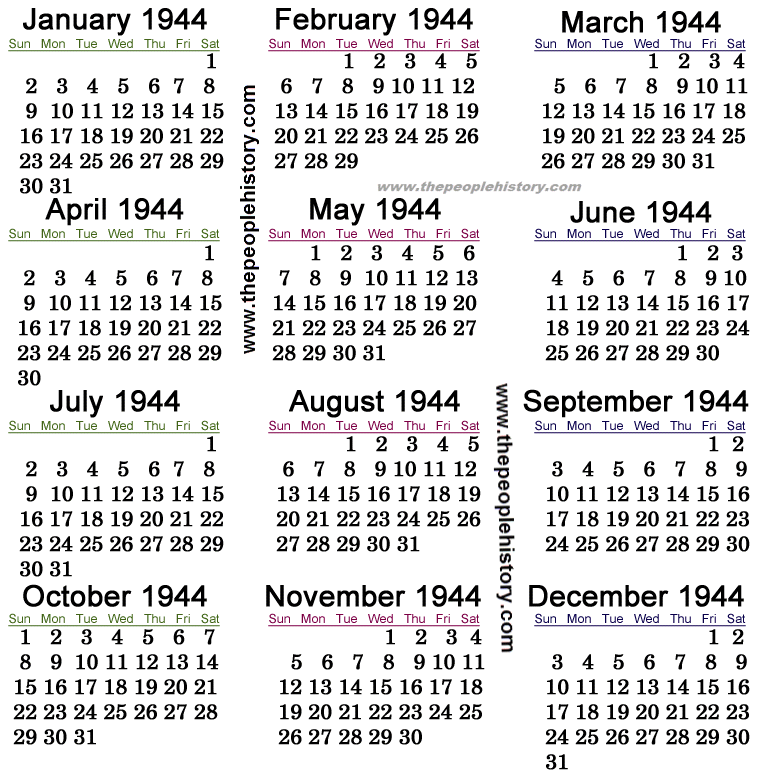