1941 The war in Europe continued to dominate world affairs but a new threat was growing which would soon involve America as the Japanese caused a threat Asia in the Pacific and preparations for war continued . The British Prime Minister Winston Churchill addressed the joint session of congress asking for help in the form of Arms . The US still continued as normal with 2 great movies produced that year that would stand the test of time "Citizen Kane" and "Dumbo". After many years where parents had decided what teenagers wore a new revolution was happening where teenagers became fashion conscious , also drive in Movies and drive in fast food were growing in popularity. On December 7 the US was attacked by the Japanese at Pearl Harbor in Hawaii more than 2400 American servicemen were killed that day and America entered the WAR . And with neutrality ended some 950 tanks were sent to Britain together with food, trucks, guns and ammunition.

What Events Happened in 1941

Hitler and Mussolini announce they are at war with America who retaliates with its own declaration of war .

Willy's Jeep Introduced for use by the US Army

U.S. President Franklin D. Roosevelt is inaugurated for his 3rd term as US President.

More Information for the Lend-Lease Act

Churchill and Roosevelt meet to discuss what will happen after the end of World War II.

More Information for the Atlantic Charter

British Prime Minister Winston Churchill and U.S. President Franklin D. Roosevelt met during August to discuss goals and the future for the Allies after the end of World War II. They met on naval ships in Placentia Bay, Newfoundland and came up with eight common goals for the end of the war in what was known as the Atlantic Charter. While the Atlantic Charter was not a treaty, it laid the foundation for the creation of the United Nations. Some of the principles in the agreement included that the United States and United Kingdom would not try to gain territory from the war and there should be international cooperation to improve living conditions worldwide.

More Information for the U.S.O.

The United States Service Organizations, also known as the U.S.O., was created by President Franklin D. Roosevelt during February . The non-profit organization was founded during World War II with the intention of providing entertainment and support services to U.S. troops and their families. Many celebrities soon became involved with the U.S.O. and would visit and put on live shows for troops, with Bob Hope most noticeably involved in the organization. The U.S.O. was well-liked by many and created a home away from home for military personnel who had been stationed away from their own homes and families. The U.S.O. closed down in 1947 but was later reactivated during the Korean War and has been operational during conflicts since.

Cost of a gallon of Gas 12 cents

The war in Europe continues to escalate with countries joining on one side or the other , and large number of civilian casualties on both sides due to the use of bombing

In the North Atlantic, the German battleship Bismarck sinks the HMS Hood on May24th killing all but three crewman on what was the pride of the Royal Navy. Fairey Swordfish aircraft from the carrier HMS Ark Royal fatally cripple the German battleship Bismarck in torpedo attack. and the attack that follows by Navy Warships sinks the Bismark on May 27

Germany attacks the Soviet Union on October 11 News Events and then begins an all out offensive of Moscow.

1. The Soviet Union and Nazi Germany sign the Molotov-Ribbentrop non-aggression pact on August 23rd of 1939.

3. Hitler orders the invasion of the Soviet Union on June 22nd in what was known as "Operation Barbarossa," breaking the Molotov-Ribbentrop pact.

4. Germany invaded the Soviet Union with an estimated force of 3 million soldiers covering over 2,000 miles of Soviet front. Germany's soldiers were better trained and had better equipment than those of the U.S.S.R.

5. Despite the appearance of German superiority, the Nazis had severely underestimated the Soviet Union. German troops were unprepared for the incoming Russian winter and the Soviet Union's forces outnumbered the German troops. This meant that despite being able to break through the Soviet armies, there were always more Soviet soldiers waiting. They also underestimated the strength of the Soviet regime, as the German leadership was sure that it would be toppled within a few months due to lack of support.

6. By July , German troops were within about 200 miles from Moscow.

7. In September, Germany begins the Siege of Leningrad which will last until 1944.

9. The invasion left Germany vulnerable, opening itself to a two-front war. The weakness caused by the failing German invasion of the Soviet Union was made evident when the United States and Allied forces successfully invaded Western Europe through France in the Battle of Normandy (D-Day) during June of 1944.

10. Operation Barbarossa ultimately failed and although the war did not end until 1945, the invasion of the U.S.S.R. hastened Nazi Germany's defeat during World War II.

11. The cost of the invasion was heavy for both sides, but especially for the Soviet Union as the estimated number of lives lost was in the millions, many of them civilians.

Germany gets within 50 miles of Kiev in Russia

The HMS Ark Royal is torpedoed by a German U-boat

Rudolf Hess, parachuted into Scotland on a peace mission and is captured by British forces.

Churchill launches the "V for Victory" campaign across Europe

1. The Enigma Machine was created and patented by Arthur Scherbius in 1918. He created the Chiffriermaschinen Aktiengesellschaft (Cipher Machines Corporation) to commercially market them to businesses in 1923. It looked like a typewriter, users would type a message into the machine and then use the 3 to 5 wheels/rotors to scramble it. To decipher a message you would need to know the exact rotor settings.

2. The code machine was soon adopted by the German military. It was first adopted by German Navy in 1926, then the German Army in 1928, and finally the German Air Force in 1933. Germans thought it was unbreakable so they used it often and for many types of communication.

3. Polish code breakers, including Marian Rejewski, had worked on the code during the late 1920s and early 1930s when it was first broken. The mathematicians who had figured out ways to decipher the code fled to France after the German invasion and continued their work. They also shared their secrets with the British when it became clear that Germany would invade Poland. Polish code breakers reconstructed an Enigma machine successfully between 1933 and 1938.

4. Alan Turing worked for the Government Code and Cipher School (GC & CS) at Bletchley Park in Buckinghamshire, England prior to the start of World War II. Turing joined Bletchley Park full-time in 1939 and took part in top secret work that specifically focused on breaking the Enigma Code.

6. Alan Turing and Gordon Welchman invented the Bombe, an early computer that would help decipher the code, in 1940. The bombes were used to determine possible settings of the Enigma machine and the first one was located in Hut 1.

7. In May of 1941, British Navy captures the German U-110 submarine and removed the naval enigma machine. The Germans did not know that the machine was intercepted as the British sunk the U-boat after retrieving it.

8. On July 9, 1941, there is a breakthrough deciphering the Enigma code used by the German army to direct ground-to-air operations on the Eastern front by British cryptologists.

9. They used some of the weaknesses of the Enigma machine itself to figure out how to break the code, but mostly relied on German user-error of the machines to help determine settings. They also used common phrases that were in many messages. Intelligence gathered through breaking the code was named "Ultra" and considered highly classified. It was rarely used by the British so as to avoid detection by the Germans.

10. In February of 1942, Germany tightened Enigma's security by adding an extra wheel to multiply the possible settings.

11. Cracking the code by Britain was believed to shorten the war by about two years and the Allies did not reveal that they had even cracked the code until 1974 due to the highly classified nature of the work that occurred at Bletchley Park.

The USSR and Japan sign a non-aggression pact during World War II.

During April Japan and the Soviet Union signed a five-year non-aggression pact. The two nations agreed to remain neutral with each other after World War II began. The two nations had historically been enemies in the past but agreed to the non-aggression pact in order for both countries to concentrate troops on larger problems rather than each other. The Soviet Union had signed a similar agreement with Nazi Germany in 1939 but in June Germany invaded the USSR and broke their pact. The USSR and Japan's pact stayed intact until 1945 when Stalin agreed to declare war on Japan at the Yalta Conference to end the war more quickly.

Germany Begins the Siege of Leningrad which lasts until 1944

Allies push back against German troops in North Africa during Operation Crusader.

2. The operation took place in North Africa where the British were nearly defeated by the German and Italian forces during the Siege of Tobruk.

5. Operation Crusader went on until the end of December and when it ended Rommel was able to quickly re-group and gain back much of what the Axis forces had lost.

6. It was, however, important in proving that Germany's Africa Corps could be defeated and gave hope for the Allies to make future gains in Africa during World War II.

The classic American film created by Orson Welles, "Citizen Kane," is released during this year.

1. The classic film "Citizen Kane" premieres in New York City, Chicago, and Los Angeles during May .

2. The film was released in the rest of the United States later that year.

3. The film was written by Orson Welles and Herman J. Mankiewicz.

4. It was directed by Welles who also starred in the title role.

5. "Citizen Kane" was Welles' first feature film and he was given mostly free reign to create the film as he wished, which was unheard of at the time.

6. It told the life story of fictional newspaper magnate "Charles Foster Kane," who was widely believed to be based on real life magnate William Randolph Hearst.

6. Filmed in a style completely different to most movies of the era, it is often praised for its unique and revolutionary storytelling which featured a lot of flashbacks.

7. The initial reception of the film was tepid as many theaters refused to show it due to Hearst's opposition.

8. It was, however, nominated for nine Academy Awards and won for Best Writing.

9. "Citizen Kane" is still considered by many to be the greatest American film of all time.

"I'll Be with You in Apple Blossom Time " Andrews Sisters

A bill creates the fourth Thursday in November as Thanksgiving Day 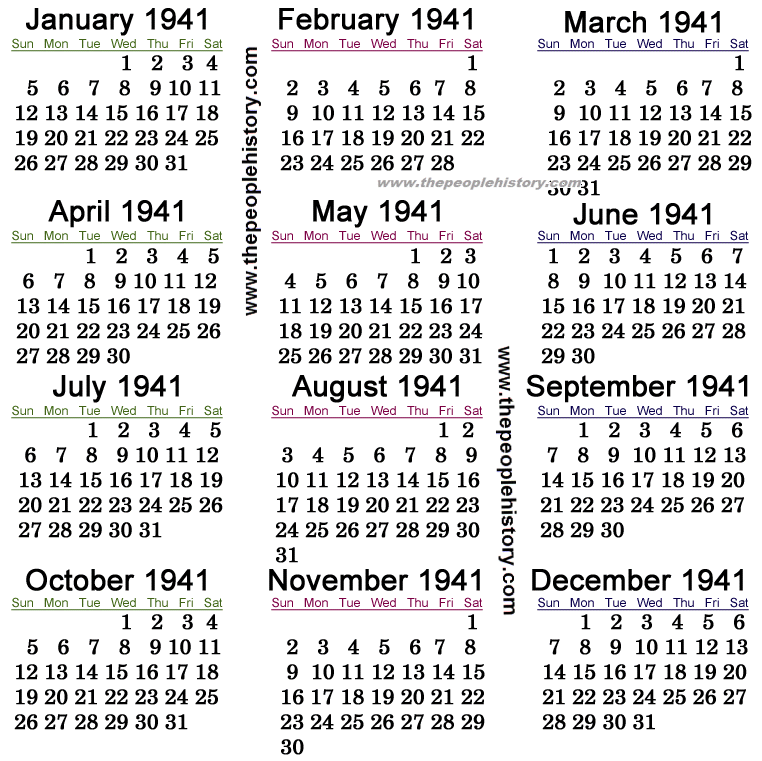