What Happened in 1945 Important News and Events, Key Technology and Popular Culture

1945 Following effects from Polio as a young man President Roosevelt died on April 12th . Following the defeat of Germany in early 1945 the war officially ended in Europe on May 7th ( V-E Day ). President Harry S. Truman orders the use of the new Nuclear Bombs developed by ( Robert Oppenheimer's team ) the first an atomic bomb nicknamed "Little Boy" on Hiroshima, Japan, and after the 2nd atomic bomb nicknamed "Fat Man" over the city of Nagasaki, Japan 5 days later Japan surrendered August 14 ( V-J Day ) .

What Events Happened in 1945

Adolf Hitler moves into his underground bunker, the so-called Fuhrerbunker

Adolf Hitler and his wife of one day, Eva Braun, commit suicide

William Joyce, known as "Lord Haw-Haw" is captured. He is later charged with high treason in London for his English-language wartime broadcasts on German radio. He is hanged in January of 1946.

World War II begins to near its end in April as the Allies close in on Berlin. The Soviet Army reached Berlin in the middle of April after making its way through Eastern Europe, liberating German concentration camps as it progressed towards Germany. By the end of the month it was clear that Nazi Germany would fall and the Allies would only accept an unconditional surrender. Hitler and several other high-ranking members of the Nazi leadership committed suicide moments before the Soviet Union reached their bunkers and Germany surrendered in the beginning of May. Fighting continued in the Pacific and the war with Japan did not end until September after the United States dropped the first atomic bombs on Japan.

More Information for the Potsdam Conference.

The final Allied leadership conference takes place in Germany during July . The three main leaders, Soviet Leader Joseph Stalin, British Prime Minister Winston Churchill, and U.S. President Harry Truman, met to discuss the end of World War II and how to deal with post-war reconstruction in Europe at the Potsdam conference. Germany had surrendered a few months prior and at this meeting it was decided that it would be divided into four occupied zones and that the country would be completely demilitarized. The borders between Germany, Poland and the Soviet Union were also readjusted. The leaders affirmed their commitment to ending the war with Japan in the Pacific and issued a stern threat of destruction to the still belligerent nation.

More Information for the Nuremberg Trials.

The Nuremberg war crimes trials begin during November after the end of World War II. Charges were brought against 24 higher-ranking Nazi officials for war crimes and crimes against humanity related to World War II and the Holocaust. There were a total of 216 sessions of court over a ten month span and a tribunal made up of U.S., British, Soviet, and French representatives conducted the trials. In the end, twelve of the defendants were sentenced to death while others were sentenced to various lengths of prison or acquitted.

The United States Tenth Army take control of Okinawa, main island of the Ryukyus, 362 miles from the Japanese home islands on June 22nd

The USS Indianapolis is sunk by Japanese Submarine killing 883 seamen on July 29 News Events , ( Many were killed through shark attacks while awaiting rescue )

USS Franklin severely damaged with the loss of 700 + lives

The United States detonates an atomic bomb nicknamed "Fat Man" over the city of Nagasaki, Japan

In March the Battle of Iwo Jima finally ends after a month long struggle took place between the United States and Japan during World War II. The battle began in February when the United States began bombing Iwo Jima in preparation for an amphibious invasion of the Japanese held island. It was a hard fought battle but the United States came out the victor, securing the island as a strategic location closer to Japan where damaged B-29 bombers could safely touch down. The battle was immortalized in the memorable photograph of U.S. troops struggling to raise the American flag atop the slope of Mount Suribachi, the highest point in the island.

The first atomic bombs are dropped on Hiroshima and Nagasaki in Japan in an attempt to end the Second World War.

More Information and Timeline for the first atomic bombs.

1. The United States begins research and development of an atomic bomb beginning in 1940 and the project is overseen by Dr. Robert Oppenheimer. It is called the Manhattan project.

3. The United States drops the first atomic bomb on Hiroshima, Japan on August 6.

4. The second bomb is dropped on Nagasaki, Japan on August 9.

5. It was estimated that the first bomb killed about 80,000 people instantly and tens of thousands of others were reported to have died from the effects of radiation in the coming weeks.

6. The second bomb was estimated to have killed another 40,000 people.

More Information and Timeline for the End of World War II.

Japan surrenders in August ending World War II. The surrender came just a few days after the United States dropped two atomic bombs on the Japanese cities of Hiroshima and Nagasaki. The bombings of Hiroshima and Nagasaki marked the first time that nuclear weapons had been used in war. The new technology behind the bombs was new and unknown and had only been successfully tested during the previous month. The bombs had a devastating effect as they destroyed up to ninety-percent of the cities with an estimated death toll of about 150,000 people, changing the world and war forever.

U.S. President Franklin D. Roosevelt is inaugurated for his fourth term in office in January.

U.S. President Franklin Delano Roosevelt has his fourth inauguration in January . He was sworn in on the twentieth, marking an unprecedented and never to be repeated four presidential terms. Due to the ongoing Second World War, his inauguration for the fourth term was held at the White House instead of the Capitol and the usual festivities like the parade were canceled. FDR's inaugural address was also noted as one of the shortest to be delivered. FDR's fourth term did not last long as he died in April . In 1947 the 22nd Amendment was added to the U.S. Constitution that only allowed a maximum of two terms for future presidents.

More Information for the Yalta Conference.

The main leaders of the Allied forces in World War II meet at Yalta during February to discuss how to end the war. The week long meeting was held between the United States president Franklin D. Roosevelt, the Soviet leader Joseph Stalin, and the British prime minister Winston Churchill. Some of the agreements made at the Yalta conference included asking for the unconditional surrender of Germany, having the Soviet Union join the fight in the Pacific to help end that part of the conflict, and how to restructure and divide the newly liberated parts of Europe. While the initial reaction to the Yalta Conference was positive, many critics pinpoint the agreements made as sources for future conflict between the US and USSR during the Cold War.

During May the Soviet Union and Allied troops entered Berlin and captured the city. Nazi Germany soon signed an unconditional surrender, ending World War II in Europe. Several high-ranking Nazi leaders were captured and several others, including Hitler, committed suicide prior to the surrender. The war had lasted for six years and several million people died as a result of the conflict. People throughout the United States, United Kingdom, and formerly occupied Western Europe celebrated the victory on May 8, , and the Soviet Union declared victory one day later on May 9, .

More of the History, Information, Original Countries and Purpose of the United Nations

1. United Nations was established to replace the League of Nations which failed to prevent World War II

2. On 24th October the five permanent members of the Security Council ratified the Charter of the United Nations

6. There are currently 192 member states (2011 ) including every sovereign state in the world but the Vatican City.

8. The UN and its agencies are immune to the laws of the countries where they operate, safeguarding UN's impartiality with regard to the host and member countries

9. Some of the best known Specialized agencies of the United Nations that you will often see in the news

2. Flight 19 was a squadron of five Avenger torpedo bombers carrying 14 men that had been on a simple training mission before running into difficulties over the Bermuda triangle.

3. During the mission all of the planes reported having compass and instrument malfunctions and, although it was unclear what actually happened, it is believed that the squadron ran out of fuel and ditched their planes into rough seas.

4. A Mariner aircraft carrying 13 men was then sent out to search for the squadron but also disappeared mysteriously.

5. No evidence of the planes or bodies were ever found during subsequent searches, adding to the mystery surrounding the Bermuda triangle.

6. The Bermuda Triangle is a region in the western part of the North Atlantic Ocean including the Straits of Florida, the Bahamas and the entire Caribbean island area and the Atlantic east to the Azores.

Only 5,000 homes have Television Sets

Assembly of the world's first general purpose electronic computer, the Electronic Numerical Integrator Analyzer and Computer (ENIAC), is completed. It covers 1800 feet of floor space. The first set of calculations is run on the computer

"Your Lucky Hit Parade" Broadcast For The First Time

Nazis begin to evacuate from Auschwitz concentration camp in Poland

Austria like Germany was divided into 4 Zones: American, British, French and Russian

The capital of the Philippines, Manila, is liberated by American forces

The capital of Burma, Mandalay, is liberated by British Troops 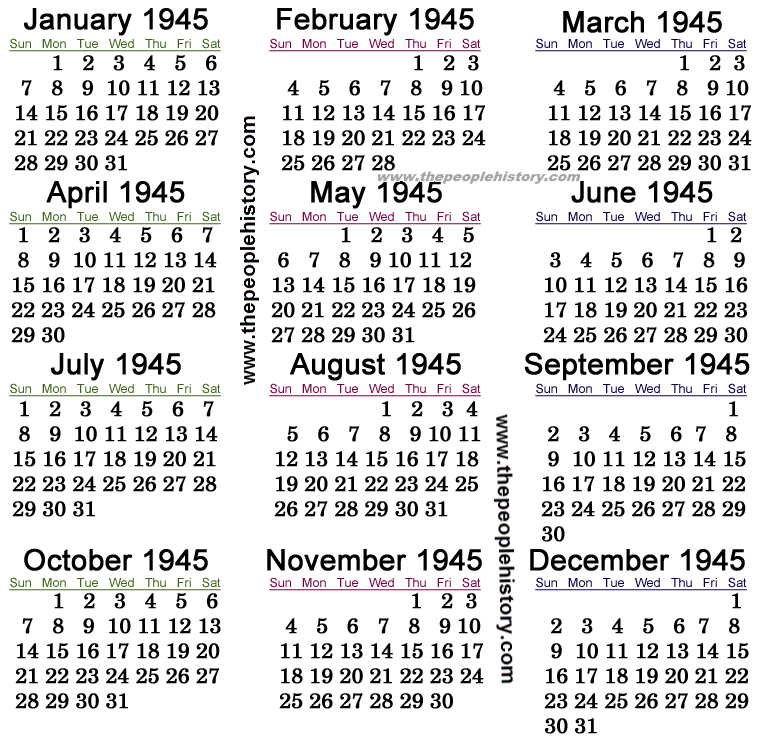