1944 : Paris is liberated after more than four years of Nazi occupation by the French 2nd Armored Division and the U.S. 4th Infantry Division and General Charles de Gaulle who had been the leader of the free French forces enters Paris the next day. Find More What happened in 1944

1923 : US Postal Service Aviators have set a new record to span the continent at 27 hours 14 minutes breaking the previous record set by Army Aviators last May. They are excited over the implications that they can provide a quicker service to customers throughout the nation.

1934 : America has reigned supreme in The America Cup 14 times since 1851 but this may well be the series when England takes the Cup back from it's home in the New York Yacht Club . Sir Thomas Lipton spent over $5,000,000 dollars trying to win it back for England but failed each time but now there is a new British Challenger T.O.M. Sopwith in his steel yacht Endeavour which has been undefeated since it started it's campaign, and the well informed believe he may well achieve what Sir Thomas Lipton could not. The series of races is due to start on September 15th in Newport Rhode Island. 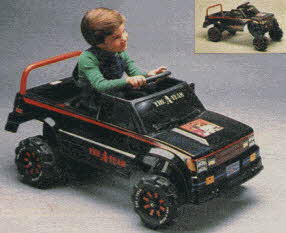 Cruise with the bower of direct drive pedal action on the A-Team Van. 4x4 styling with high gloss finish and a full-color photo of the A-Team on the hood. Has plastic body with independent front suspension, steel steering rods, and rear "roll" bar.

1945 : After nearly 4 years away from home children are being reunited with parents, some who were evacuated to as far away as America, these children and parents will have a lot of catching up to do as well as adjusting back to a very different life. Many of the children were evacuated to rural areas in England and America and are going back to large cities.

1950 : President Harry S. Truman issues an executive order putting America’s railroads under the control of the U.S. Army, two days later in anticipation of a strike by railway workers Unions, The strike continued for 21 months at which time Unions agreed to the administrations terms and went back to work.

1956 : President Nasser has come up with an alternative plan for the Suez canal offering guaranteed unimpeded shipping through the Suez canal in response to the demand for internationalization of the canal by 18 countries, the use of force is no longer on the agenda as all countries are now seeking a diplomatic solution to this problem.

1967 : The Beatles Go to Bangor in Wales to study Transcendental Meditation under Maharishi Mahesh Yogi prior to the time spent on a training course in Rishikesh, India in 1968 where much of their White Album was written.

1975 : The third Bruce Springsteen album "Born to Run" by is released, the album turns Springsteen into a worldwide superstar and is considered to be in the top all time 20 albums by most music critics. Find out What Happened in 1975.

1989 : The unmanned Voyager 2 spacecraft has reached the Planet Neptune which is over two billion miles from Earth and sent back the first close-up pictures of Neptune and its satellite planets.

August 25th, 1991 : Linus Torvalds releases his first version of the Linux operating system kernel (0.01 of Linux) called 'Freax' in the makefile to the world and announces it through a Usenet posting on a newsgroup which could be found on the ftp server at the Helsinki University of Technology (HUT). The Linux operating system is a Unix-like operating system kernel and is distributed under GNU General Public License. The original kernel was based on earlier work done by Richard Stallman on the GNU Project, started in 1984. The majority of the servers on the internet I.E. (where this site and millions of others) use Apache software that runs on top of the Linux kernel.

1992 : The Sun Newspaper has published a recorded telephone conversation with an unknown woman who may or may not be Diana the Princess of Wales talking to an unknown man about her unhappy marriage, They have now made the tape available on a 95 cents per minute telephone service and thousands are paying up to $22.00 to listen to the full recording.

1997 : The former East German leader, Egon Krenz, is found guilty of instigating a shoot-to-kill policy by border guards against people trying to flee East Germany and is sentenced to six-and-a-half years in prison.

Known For : Tim Burton best known as a Hollywood Movie director and producer, with a number of highly successful movies including Beetlejuice, Edward Scissorhands, Batman, Batman Returns and Charlie and the Chocolate Factory. His movies are often successful because of his dark and quirky humor which makes them significantly different to other movies to come out.

Known For : Sean Connery best known as The first Actor to play "James Bond" in Ian Fleming's books about the British Spy 007 who is known to introduce himself as my name is " "Bond, James Bond" " Sean Connery played the character in Dr No, From Russia with Love, Goldfinger, Thunderball and You Only Live Twice. Sean Connery has played in a number of other movies including The Untouchables (winning Academy Award for Best Supporting Actor), The Hunt for Red October, and The Rock.

2003 : Two powerful bombs planted in taxis, are exploded in busy Bombay area's, One outside the Taj Mahal Hotel in the major tourist area of Gateway of India, and the other at a busy jewelry market, both were during the busy lunchtime period killing at least 44 people and injuring nearly 150.

2004 : The US Census Bureau has released new figures which indicate 15.6% of the population of the United States do not have health insurance (45 million). The reasons range from companies providing less health insurance and vastly increased premiums for health insurance. One additional interesting statistic is that estimates put the number of those who declare bankruptcy due to medical debts at more that 60% of all bankruptcies (this figure does include those with Health Insurance but who could not afford the co-pay payments which are dependent on quality and level of the health insurance cover).

2005 : Hurricane Katrina makes landfall in Florida between Hallandale Beach and Aventura, Florida Mid Morning as a Category 1 hurricane sustained wind speeds of 125 mph, Storm Surge is about 5ft. The Hurricane leaves over 1 million without power and 12 dead. Hurricane Katrina Timeline.

2005 : The king of Swaziland King Mswati III has ended the end of a sex ban when girls wore woolen tassels symbolizing chastity. The ban was in answer to the countries statistics with 40% of Swazi citizens being HIV positive.

2006 : The first legal abortion in Colombia happened on this day. After months of legal battle the courts decided that abortion could be legal in the country in cases where the mother’s health is in danger, the pregnancy is a result of rape, or the fetus is severely deformed. The case was brought by an 11-year old girl who had been raped by her stepfather.

August 25th, 2007 : A teen in New Jersey has managed to unlock the iPhone which will allow buyers to use the iPhone on other networks other than the official AT&T network. AT&T and Apple have a joint agreement which means the iPhone can only be sold with an AT&T contract which means Apple receive an additional fee from AT&T and can sell the actual phone cheaper than is would be otherwise.

2008 : An Italian priest announced plans for a beauty pageant for nuns. He asked nuns to send their pictures to him so that he may post them on the internet for web users to vote on. He hopes his project will end stereotypes of nuns being old and unattractive. His plans were cancelled only one day after the announcement because of criticism from his superiors.

2009 : South Korea successfully launched its first rocket into space. The rocket was carrying a satellite that was not put into the intended orbit. The South Korean government thus dubbed it as a “partial-success.”

2009 : United States Senator Edward Kennedy died on this day of brain cancer at the age of 77. Edward was the brother of assassinated US president John F. Kennedy and served as a Massachusetts senator for forty-seven years.

2011 : Two days after a 5.8 magnitude earthquake that shook the East coast struck near Mineral, Virginia, an aftershock with a magnitude of 4.5 struck five miles south of the epicenter. The quake was the strongest of the aftershocks but there was no immediate damage reported.

2011 : Steve Jobs announces his resignation of CEO of Apple, he has been fighting pancreatic cancer since 2004 and has been on medical leave since January of this year. Tim Cook who has been acting CEO during Steve Jobs Medical Leave was personally recommended by Jobs to take over as CEO.

August 25th, 2012 : US Astronaut Neil Armstrong, the first man on the moon, died at the age of eighty-two after complications from heart surgery. Armstrong had recently won the Congressional Gold Medal, the highest civilian award, and was described as a reluctant hero.

2013 : At least five people died after a cargo train was derailed and then crashed in Southern Mexico. The cargo train was known for carrying Central American migrants who wanted to reach the United States. Another thirty-five people were injured, some of them seriously. There was also an unknown number of people trapped and authorities expected the death toll to rise. 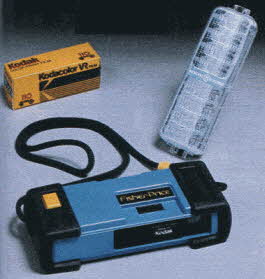 
This camera from Fisher Price and Kodak is made for children. It has specially designed film-advance and shutter controls that are extra-large for use with small fingers. Level pictures are a snap thanks to the bright red indicator. It has soft, cushioned end caps, a "breakaway" neck strap, impact-resistant film door and built-in lens cover, 110 film and flip flash. No batteries required.