What Happened in 1943 Important News and Events, Key Technology and Popular Culture

1943 Following American involvement in the war manufacturers around the US became as efficient at producing war machines as they had been producing other goods with companies like ford and GM managing to change from cars to bombs and aircraft engines and at the same time due to the number of men overseas fighting the war using more women for manufacturing a total of 18 million women were employed. Due to shortages America sees it's first rationing. Italian and German forces surrender in North Africa as the war in Europe starts to turn the Allies way. The Glenn Miller Orchestra provided the most popular music of the time.

What Events Happened in 1943

The Pentagon, considered to be the world's largest office building is completed

In the United States, it is announced that shoe rationing Canned food, meat, cheese, butter and cooking oils will go into effect

The United States and United Kingdom meet to discuss the future invasion of France during WWII.

More Information for the Quebec Conference

The Quebec Conference was held during August . This was the first of two secretive meetings held between the leaders of the United Kingdom and United States and their military advisors, held in Quebec, Canada. During the meeting, code named "Quadrant," Prime Minister Winston Churchill and President Franklin D. Roosevelt met in Quebec to discuss and coordinate plans for the invasions of France and Italy.

2. The Italian government surrendered quickly as they had already been negotiating terms of surrender since July when the Italian dictator Benito Mussolini was overthrown.

3. Italy declared war on Germany in the following month and agreed to help the Allies liberate the country from German occupation in return for leniency.

4. Despite the quick surrender, liberating Italy from Nazi Germany was a long and arduous affair as German troops freed Mussolini and installed him as a puppet leader, establishing a new government in the north.

6. Germany did not completely surrender in Italy until May 2 1945 just before the end of World War II in Europe.

British deception plan " The Man Who Never Was" or Operation Mincement executed.

The Allied leaders of Britain, the United States and the Soviet Union meet for the first time in Iran

The British and Americans bomb Hamburg on July 24th causing a firestorm that kills 42,000 German civilians.

1. The building was designed by architect George Bergstrom.

2. Construction began in September of 1941 and was overseen by Leslie Groves (who also headed the Manhattan Project).

3. The building was needed for the growing War Department under FDR in World War II and cost about $83 million to create.

5. Construction on the Pentagon government building was finished during January .

6. Spanning over 29 acres in Virginia, it has 5 sides, 5 above ground floors, 2 basement floors, a center courtyard.

7. It is one of the largest office buildings in the world, with over 20,000 workers.

8. Despite its size, it is possible to walk across one side to the other in about 10 minutes.

The Moscow Declarations were signed on October 30 News Events at the Moscow Conference. The Declaration of the Four Nations was signed by the United States, Soviet Union, United Kingdom, and Nationalist China and it recognized that the war would not end until the Axis Powers submitted to an unconditional surrender. The Declaration of Italy stated that fascism would end in favor of democratic institutions created by the Italian people. The Declaration of Austria declared the German annexation to be null and that Austria should be freed at the end of the war. Finally, the Declaration of Atrocities stated that Germans who had participated in committing atrocities would be punished by the nations where the acts were committed or by a joint decision of the governments of the Allies.

1. Germany tries to invade and take over Stalingrad beginning in 1942 as a part of Operation Barbarossa their larger attempt to invade the Soviet Union as a whole.

3. It was one of the largest and bloodiest battles of World War II with estimates of over 1.5 million people killed.

4. Stalingrad was an important industrial city for the Soviet Union. Germany hoped that by invading and taking the city it would make it easier to control the Southern part of the Russia.

7. The battle effectively ended in January of 1943 with the Soviet Union's Operation Ring where Soviet armies surrounding the remaining German armies, leading to the surrender of Germany's General Paulus.

8. The remainder of the German armies surrendered on February 2, 1943, bringing an end to the Battle of Stalingrad.

9. The Allied victory marked an important turning point in the war, shifting the tide in favor of the Allies.

The World War II Battle of Berlin begins during November. It was an air raid campaign led by the British Royal Air Force (RAF) against Nazi Germany and Allied commanders hoped the bombings would devastate German morale and force a surrender. The RAF mainly targeted Berlin but also targeted other German cities. Despite the huge loss of life and property that Germany faced as a result of the bombings, it was considered a failure for the British who faced a six percent loss rate per raid. The Battle of Berlin ended in March of 1944 and over 1,000 British crewmen were taken as POWs.

1. The US Mint begins producing the one-cent coin in steel due to copper shortages during World War II. Copper was being used for the created of ammunition and other military items.

2. They were produced at the Philadelphia, Denver, and San Francisco mints.

3. The pennies had the same design as the regular copper penny which was introduced in 1909.

4. The steel pennies were made with low-grade steel and coated with zinc. They had previously been made with a 95 percent copper-based bronze.

5. There were about 40 copper pennies that were created by accident in 1943 which have become some of the most valuable and sought after coins by collectors.

6. The US Mint switched back to creating copper pennies in 1944.

The United States Congress passed the Smith-Connally Act, also known as the War Labor Disputes Act, over the veto of President Franklin D. Roosevelt during June. The law allowed the President to seize control of striking industries that could interfere with war production during World War II. It also banned labor unions from making federal campaign contributions. The legislation was a rushed reaction to a strike by coal miners who had asked for a pay increase to combat inflation. The act was first used in 1944 when transit workers in Philadelphia went on strike after being ordered to hire African-Americans as motormen. Roosevelt broke the strike by sending the US Army to run the transit system and threatened drafting strikers.

More Information for the AAGPBL.

The All-American Girls Professional Baseball League (AAGPBL) was created during May by Chicago Cubs owner Philip K. Wrigley. The purpose of the league was to try to fill empty baseball stadiums and provide entertainment during World War II. The AAGPBL had its spring training at Wrigley Field where female players were chosen for the four original teams and signed to professional contracts. There were fifteen players chosen to fill each team, the Racine Belles, Kenosha Comets, Rockford Peaches, and South Bend Blue Sox. The AAGPBL was popular and expanded during the rest of the decade but was dissolved in 1954 as interest waned. The popular 1992 film "A League of Their Own" was based on the early years of the AAGPBL.

The Jefferson Memorial was dedicated during April in Washington, D.C. The memorial was designed by John Russell Pope and was built by John McShain, a contractor from Philadelphia. Construction on the monument started in December of 1938. Located at the Tidal Basin of the Potomac River, the memorial was designed as a circular structure with a Pantheon-like front and was made out of Danby marble from the state of Vermont. In 1947, a bronze statue of the founding father was added in the center of the memorial.

1. As a result of several failures and neglectfulness by British leaders, a massive famine hit India during 1943 throughout the entire year.

2. Known as the Bengal Famine, due to the worst of it being centered in the Bengal region of India, the death toll was estimated to range between 1 and 3 million people, possibly even more. India, at the time, was still under the control of the United Kingdom and was a British colony.

3. Leading up to the famine there were increased exports of rice due to World War II and the British worried that Japan would invade the region, as they were occupying nearby Burma, so local authorities were confiscating and destroying stores of rice in case of an invasion. Miscalculations like this, and the fact that there were some natural disasters, food hoarding, and farming irregularities contributed to the worsening famine.

4. The British Prime Minister was Winston Churchill who made it clear that he was more focused on the British war effort during World War II and was seen to be ignoring the crisis in India. Churchill and England prioritized maintaining food stores and stockpiles in Britain and Europe and the War Cabinet turned down several offers by the United States, Canada, and Australia to help bring food to the country.

5. By October of that year the military took over the relief effort and it started to work more efficiently and by November, the first shipments of barley and wheat began to arrive.

6. While the British relief effort worked to stop the famine by 1944, Churchill’s lack of interest and several bad policies exacerbated the situation, prolonging the famine.

1. Guadalcanal was a strategically important island in the Solomon Islands that Japan had taken over in May of 1942.

2. The battle began in August of 1942 and ended in a decisive Allied victory.

3. While tens of thousands of troops battled for control of the island, there were also six distinct naval battles.

4. Japanese troops sustained heavy casualties and there were large numbers of ships lost on both sides.

5. The Battle of Guadalcanal comes to an end during February of 1943.

6. It was the first major offensive launched by Allied forces against Japan in the Pacific.

One of the longest running and most popular Broadway musicals, “Oklahoma!,” debuts on March 31st. The musical was created by Broadway legends Richard Rodgers and Oscar Hammerstein II and ran for a record-breaking 15 years with a total of 2,212 performances. The plot revolved around a love triangle between farm girl Laurey and her cowboy and farmhand suitors and was set in the Oklahoma territory during 1906. It was considered risky at the time due to its structure which integrated the musical numbers with the plot and character development as well as the choice to cast relatively unknown actors. Notable songs include the titular “Oklahoma!,” “Oh, What a Beautiful Mornin’,” and “People Will Say We’re In Love.” This was the first collaboration between Rodgers and Hammerstein who would also create popular shows like “The Sound of Music,” “South Pacific,” and “The King and I.”

Development of the Colossus computer by British to break German encryption

Aqualung Frenchmen Jacques Cousteau and Emile Gagnan develop a practical solution to breath underwater the Aqualung with a breakthrough of using an air pressure regulator, because of the World War II they did not bring the Aqualung to market until 1946. ( Jacques Cousteau is best known as a renowned underwater explorer and marine conservationist. )

For Whom the Bell Tolls

" In The Mood " By Glenn Miller

The Works Progress Administration ( PWA ) designed to provide jobs during the Great Depression of the 1930's's is ended.

Due to shortages in Copper the U.S. one-cent coin is struck in steel

"Pay As You Go tax" introduced in US on June 9th

Car Tax Registration introduced in US

The Pentagon in Washington D.C. is Completed 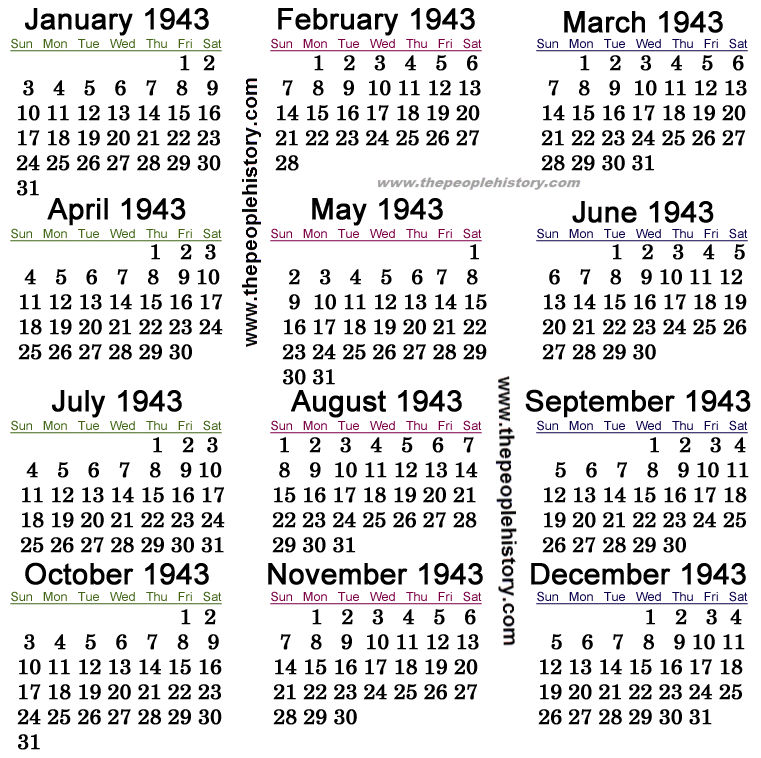