What Happened 80 years ago in 1942 Important News and Events, Key Technology and Popular Culture

1942 Following the US entering the war , the mobilization of war efforts were quick and effective with car makers and other manufacturers changing to production of weapons of war . The war also created a new breed of movies with war themes , and one of the most popular songs of all time "White Christmas" from Bing Crosby first appeared in the movie "Holiday Inn" . The US sentiment towards Japanese following Pearl Harbor showed itself when 120,000 people of Japanese descent were sent TO internment camps. In late 1941 and early 1942 the war in the pacific was not going well with America losing Guam, Hong Kong, Wake, Singapore and the Philippines , but late that year the US started to turn round the war with major offences at Midway and The Coral Sea. And meanwhile the allied forces in Europe invaded North Africa in November.

What Events Happened in 1942

Following the United States joining the War it truly becomes a World War with most areas of the world effected in some way and choosing sides , There are so many important facts that happened we have only a few facts and leave it to others more knowledgeable than ourselves to provide a more detailed account

The United States conducts an air raid on Tokyo during World War II.

More Information for the Doolittle Raid


The United States leads its first air raid attack on the Japanese main islands during April in World War II. It was known as the Doolittle Raid or Tokyo Raid, and the attack targeted Tokyo and other locations on the island of Honshu. While the attack did not inflict much actual damage on Japan, it was still seen as a victory for the United States. It was a retaliation after the Pearl Harbor attacks and helped to boost morale in the United States. It also proved that Japan was vulnerable to air attacks. The raid was planned and orchestrated by Lieutenant Colonel James Doolittle who was later given the Medal of Honor and promoted.

The minimum draft age is lowered from 21 to 18.

The K9 corps begins training dogs for use in warfare

In Allied countries around the world government war efforts encourage the population to help by giving scrap metal as much needed raw materials for guns and tanks.


Beginning in October the United States government increasingly encourages U.S. citizens to donate and gather scrap metals and fabrics for the war effort. These "Scrap Days" are held throughout the country and asked ordinary people to take any scrap materials they could get their hands on to their local scrap merchant. The scrap would then be used to create the raw materials needed to build tanks, guns, and ships that were desperately needed. Children were also encouraged to bring the scrap materials to school as many of the schools and public buildings became local donation centers. In some places, children brought up to 10 pounds of scrap weekly.

Congress creates the Women's Army Auxiliary Corps ( WAAC ) and modeled after the British Auxiliary Territorial Service (ATS) , during the war General Douglas MacArthur called the WACs "my best soldiers", adding that they worked harder, complained less, and were better disciplined than men. Over the next 6 months similar women's units were set up including Navy WAVES, the SPARS of the Coast Guard and the (civil) Women Airforce Service Pilots.

US Gas Rationing goes into effect 3 gallons per week

The Alaska Highway from Alaska through Canada is completed

The Battle of Midway begins on June 4 News Events when Japanese attacked Midway and due to US strategy was a resounding success for US Forces which resulted in the loss of 322 aircraft and 3,500 men from the Japanese Navy.

Duck Tape The US Military using ( The Johnson and Johnson Permacel Division ) developes Duct Tape ( Duck Tape ) originally called Duck Tape by the troops because water ran off it but later adapted to Duct Tape because of it's use to provide a seal over ductworks. 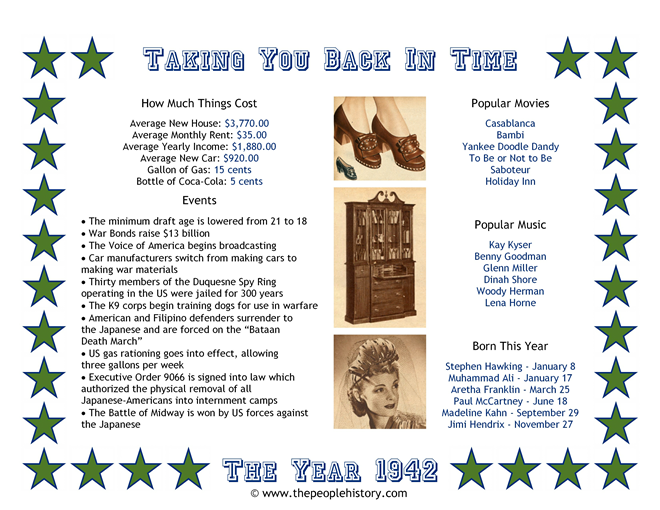 80th Birthday customize with a message at the top, photos in the center, and more! Once we receive your order we create your personalized print using the information that you include with your order.

The Declaration of the United Nations was signed by 26 nations during January . It laid the foundation for what would become the United Nations Organization after the end of World War II. Leaders, including Roosevelt and Churchill, and representatives from the United States, United Kingdom, China, and Soviet Union, as well as 22 other nations, had been meeting in Washington, D.C. to discuss important military decisions regarding the war after the U.S. joined the Allies. The signing of the Declaration affirmed that the signatories would adhere to the Atlantic Charter, a document drawn up to define the goals of the Allies after the war that had been created in August of the previous year.

The Voice of America (VOA) radio program began broadcasting during February. The program was established as a World War II propaganda tool that would broadcast news of the war in an effort to fight against Nazi propaganda and help to boost morale of the Allied troops abroad. After the end of the war, VOA continued broadcasting but the focus shifted to countering Soviet propaganda in Russia during the Cold War. Eventually, VOA expanded worldwide and it is now broadcast in 47 different languages and is listened to by over 230 million people every week.

General Douglas MacArthur makes a dramatic escape from the Philippines during March. As Japanese forces were closing in on the Philippines, President Roosevelt ordered MacArthur to leave. MacArthur had been on Corregidor Island where he was appointed as the Field Marshal of the Philippine Army, in charge of about 100,000 American and Filipino troops. As it became clear that the Japanese would be successful in their invasion, MacArthur was forced to leave his troops behind and he escaped on a PT boat with his family through Japanese-controlled waters. MacArthur traveled to Mindanao where he boarded a B-17 and flew to Australia. He vowed to return and rescue his troops and the US reclaimed the Philippines in 1945.

The popular Walt Disney film “Bambi” premiered on August 21st. The film was Disney’s fifth animated feature film and was nominated for three Academy Awards including Best Original Song. It was based off the Felix Salten novel “Bambi, A Life in the Woods.” The story revolved around an orphaned deer and his friends Thumper, Flower, and Faline, in the forest. Upon its original release the film lost money but it has since gained popularity after being re-released several times and is now considered a classic.

Italian physicist Enrico Fermi created the first nuclear chain reaction in his lab at the University of Chicago on December 2nd. The reactor that he created was called Chicago Pile-1 and was constructed underground beneath the bleachers of a squash court at the University. It was developed as a part of the Manhattan Project, a U.S. government and military program with the goal of creating nuclear weapons. Fermi and his team constructed their reactor at the lab in just a few weeks. This accomplishment took place at the height of World War II and was an important step towards ending the war as the United States would successfully create nuclear bombs just three years later.

The Women’s Army Auxiliary Corps (WAAC) was created on May 15. The bill creating WAAC was introduced by U.S. Representative Edith Nourse Rogers in 1941 but it had been held up until the U.S. Entered World War II. The bill guaranteed women who were volunteering with the army an official status, salary, and eventually full Army benefits. “Auxiliary” was soon dropped from the name and over 150,000 American women joined the Women’s Army Corps during the war. Their purpose was to release men from their duties by filling clerical jobs as well as other positions like electricians, air traffic controllers, and radio operators. WACs were stationed around the world and their success inspired the creation of other women’s units.

The WAVES (Women Accepted for Volunteer Emergency Service) were established by the United States Congress and signed into law by President Franklin D. Roosevelt during July. The establishment of the WAVES made it easier for the Navy to fill clerical and office roles at home in shore stations while allowing men to return to sea duty. There were about 100,000 WAVES and Mildred McAfee was appointed as their first commander. Although a majority performed office work, WAVES also took part in naval aviation, bombing calculations, radio operations, parachute rigging, and health care. The WAVES continued to function until 1978 when women’s units were integrated into the US Armed Forces.

The Battle of Milne Bay, during World War II, ends during September. The battle was fought between the United States and Australia against the Japanese in New Guinea. Japanese forces attempted to attack Allied air fields at Milne Bay but had dramatically underestimated the amount of Allied troops that were stationed there. The Japanese forces were forced to abandon their attack, marking the first major battle in which the Allies defeated Japan during a land battle.

The classic film "Casablanca" has its premiere..

The classic film "Casablanca" has its premiere..

More Information and Timeline for the Casablanca premiere

The iconic and classic film "Casablanca" premieres on November 26th in New York City. The film stars popular actors Humphrey Bogart and Ingrid Bergman, along with Claude Rains, Dooley Wilson, and Paul Henreid. The film, based on a play, focuses on the complicated relationship between two former lovers and is set in North Africa at the beginning of World War It was a hugely successful movie and remains one of the most quoted and loved films of all time, continually ranking high on lists of the best movies ever made. After its release it was nominated for eight Academy awards and won three, including Best Picture, Best Director, and Best Writing.

" Deep in the heart of Texas " by Alvino Ray

The British Government accept the findings of The Beveridge report which proposes a welfare system for Great Britain to provide services from the cradle to the grave.

British asked to bathe in 5 inches of water or less to help the war effort.

Norway under German Occupation is ruled by Vidkun Quisling,

Singapore Surrenders to the Japanese 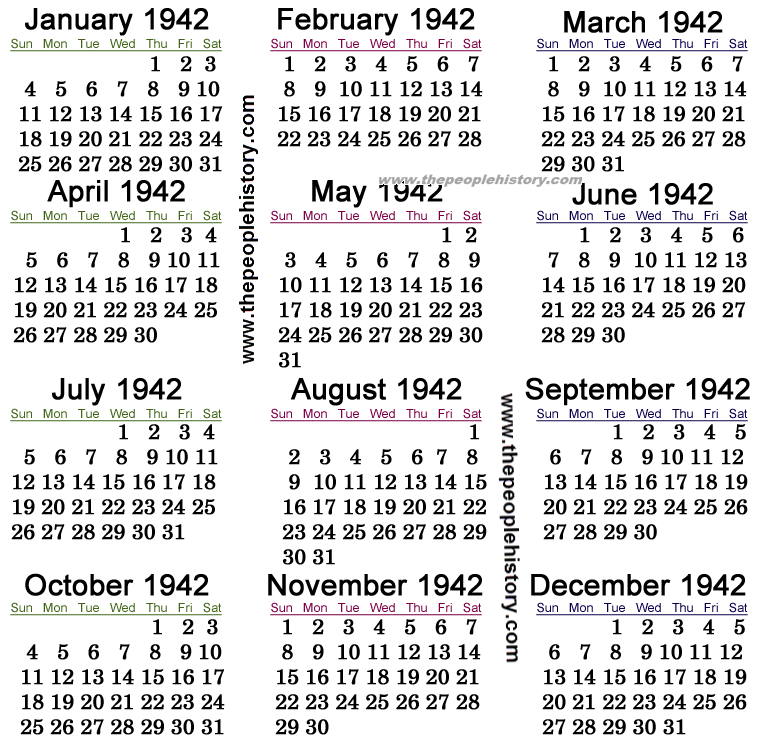