What Happened in 1946 Important News and Events, Key Technology and Popular Culture

1946 Following the end of the war people expected a better life than before the war years with the Great Depression causing poverty and hardship worldwide. There were major shortages in jobs and housing for those returning from war , around the world the start of the baby boom also started as couples married and had children , also there were still shortages of food, and materials.

What Events Happened in 1946

The General Assembly of the United Nations holds its very first meeting during January . The fifty-one original member states met at the Westminster Central Hall in London, England. Representatives for the member states met to discuss the procedural rules that they would follow in subsequent meetings. They also adopted their first resolution which dealt with the new issues related to atomic energy and nuclear weapons.

The League of Nations holds its final meeting.

More Information for the League of Nations

Bikinis go on sale on July 5th in Paris.

More Information for the Bikini

1. The "bikini" debuted in Paris during July .

3. During World War II women's swimming suits gradually got smaller and became two pieces due to a combination of fabric use restrictions and societal changes. But, they had still been relatively conservative compared to Reard's newly developed much smaller two-piece swimming suit.

4. The bikini caused quite a bit of a scandal and controversy when it was revealed but gradually gained acceptance across much of Europe throughout the Fifties even as it was banned in certain locations.

5. The bikini did not reach the United States until the 1960's when it became popular with youth culture, but it was only really fully accepted after film stars were seen wearing it and it became a pop culture standard.

UNESCO (United Nations Educational, Scientific, and Cultural Organization) was created and held its first session during November . The Constitution of UNESCO had been previously signed during November of the previous year and came into force after twenty countries including the United States, United Kingdom, France, China, and India, ratified it. The purpose of UNESCO was to prevent the future possibility of a world war by nurturing a worldwide peace through working together on educational, scientific, and cultural issues.

The Mensa society is created, the only qualification for membership being a high IQ in the top 98th percentile.

The Mensa Society was created during October by Roland Berrill and Lancelot Ware in England. Mensa was created with the intention of providing a nurturing and inclusive club for some of the most intelligent people around the world. The only requirement for membership was to have an IQ in the top 2% of the overall population. Mensa does not have any political or religious affiliations, designating itself as a fun group for people of all backgrounds to share in activities and ideas. Since it was founded the club has expanded and has over 120,000 global members.

Couple of examples of houses for sale

The United Nations International Children's Emergency Fund (UNICEF) is created during December . The organization was created by the General Assembly of the U.N. after World War II in an effort to provide help and services to children living in war-torn or trouble countries. Since its creation, UNICEF has become an outspoken voice for children's rights. In the 1980s it helped to create the Convention on the Rights of the Child, which soon became the most widely accepted human rights treaty in history

The McMahon Act is signed into law and creates the Atomic Energy Commission.

The Atomic Energy Act of 1946, also known as the McMahon Act, was signed into law by President Truman during August . The act created the civilian-controlled United States Atomic Energy Commission (AEC). The AEC was used to oversee the creation of nuclear weapons and to research and implement the peaceful use of nuclear energy. The AEC would also be used to regulate the nuclear power industry until 1974 when the Nuclear Regulatory Commission was created. A year after the act was passed, the commission was created and power over the nuclear program was transferred from the Manhattan Project and the U.S. Military to the AEC.

1. Tupperware is introduced to U.S. consumers .

2. The innovative plastic food containers were developed by Earl Tupper out of a type of plastic that he had created in 1938.

3. Tupperware became a new alternative to storing food that weighed less than glass and was less easy to break.

4. It was also made with an airtight design, allowing a longer time for storage before the food went bad.

5. Originally, Tupperware was not very popular as a product in retail stores because people did not know what it was or how to use it.

6. In 1948 the Tupperware company began hosting Tupperware Home Parties where the products could be demonstrated and tested in front of potential buyers.

7. They were often sold by homemakers directly to other homemakers, creating a unique career opportunity for many women after World War II.

8. The early popularity of Tupperware reflected a changing American society as suburban life became the norm and the need for quick and easy food solutions increased.

9. Sales boomed throughout the next decade as the brand became a household name and a staple in many kitchens.

10. Tupperware has also adapted to changing household needs since the 1940's and 1950s. It has been re-invented into items that are the most useful for families or individuals as the way households operate has been constantly changing since its creation.

The very first Cannes Film Festival is held during the month of September . The international film festival had been originally scheduled to debut in 1939 but was postponed after the outbreak of World War II. Held in the French Riviera in the city of Cannes, the festival was created as a place for up and coming films from around the globe to be previewed and judged. The festival has since evolved into a more commercial endeavor, but is still thought of as a prestigious social gathering for the top names in international film making.

The ENIAC (Electronic Numerical Integrator and Computer) is revealed at the University of Pennsylvania.

More Information and Timeline for the ENIAC.

In February , the first programmable, general-purpose electronic digital computer was introduced at the University of Pennsylvania. It was called ENIAC, which stood for "Electronic Numerical Integrator and Computer" and was built by J. Presper Eckert and John Mauchley for the U.S. Government during World War II. The project began in 1943 and cost about $400,000 to complete. The computer was gigantic and took up the space in a room that was thirty by fifty feet. The first task that it had was to work on calculations related to hydrogen bomb construction.

After the end of World War II, tensions between the United States and Soviet Union increased leading to a time of heightened hostilities between the U.S. and its allies and the U.S.S.R. and its allies known as the Cold War. In March British Prime Minister Winston Churchill gave one of his most well known speeches while in Fulton, Missouri in which he coined the phrase "Iron Curtain" to describe the symbolic divide in Europe between communism and democracy. His speech marked one of the first openly declaratory statements that addressed the Cold War and outlined some of the potential dangers of an aggressively expanding Soviet Union.

More Information for the Railway Strike

About 250,000 railroad workers went on strike during May . Members of two major unions, the Brotherhood of Locomotive Engineers and the Brotherhood of Railway Trainmen, organized the strike to seek wage increases. The strike left thousands of commuters stranded and, when coupled with the coal miners strike that took place during the previous month, the country's economy came to a standstill. The strike went on for four days before both sides could come to an agreement. President Truman had threatened to use the government to operate the railways by drafting the striking workers into the army. Truman's threats worked in ending the strike and the incident paved the way for future anti-union laws such as the Taft-Hartley Act which was passed in 1947.

The BBC restarted regular television broadcasts during June . The BBC had begun regular television broadcasts during 1936 but when World War II began in 1939 the broadcasts were abruptly ended. They ended the television service during the war due to fears that bombers might be able to use the signals to attack. TV was also thought of as an extravagance during the war and was cut off so that resources could be diverted to more important causes and that engineers could focus on more important jobs. After seven years, the BBC resumed their broadcasts with a re-airing of the Mickey Mouse cartoon that had been the last program shown before the war.

The US starts Atomic Tests on Bikini Atoll

Bikinis go on sale on July 5th in Paris

Bill Haley's professional musical career begins as a member of The Down Homers.

In Britain, the House of Commons decides to nationalize mines

5 Die in Riot at Alcatraz

Tidal waves strike Hawaii which were caused by earthquake near the Aleutian Islands, Alaska

30 million people are close to dying of starvation in China

A major 7.4 magnitude undersea earthquake hits near Alaska in the North Pacific ocean on April 1st. It caused a tsunami that reached Hawaii some 2,400 miles away. The waves reached 60 ft in height and hit coastal areas of Hawaii causing the deaths of more than 150 people.

War Crimes Trials are held in Tokyo for those accused of committing war crimes and crimes against humanity during World War II.

The US starts Atomic Tests on Bikini Atoll 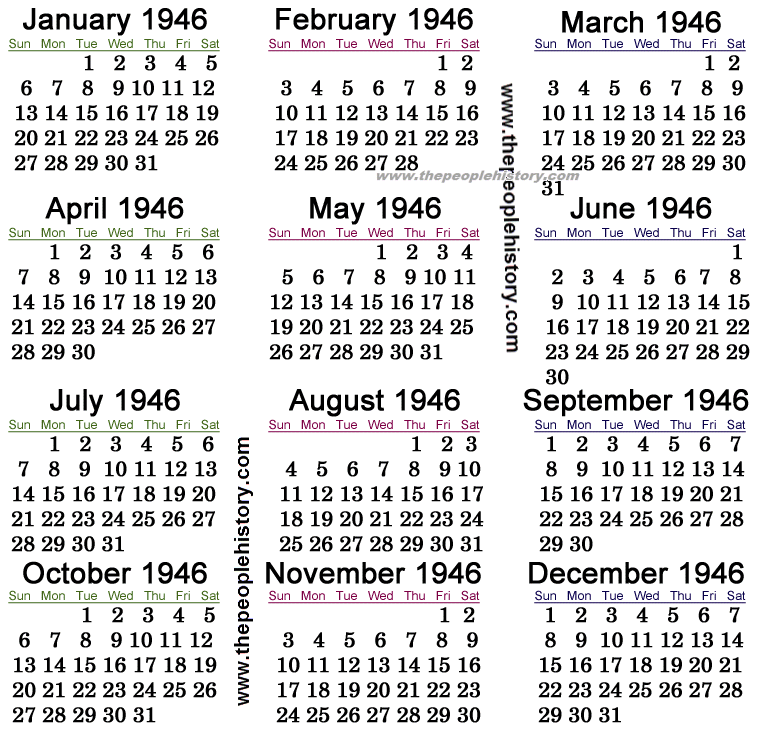