The Thirties saw the growth of Shanty Towns caused by the Great Depression, Dust Storms, Radical Politics Around The World, and what many consider an upside down world where bank robbers were seen as hero's not villains.

What Happened in 1930 History

Mahatma Gandhi and his followers march 200 miles to the salt beds of Jalalpur.

What Happened in 1931 History


US suffers worst ever drought in its history, leading to the Dust Bowl years.

The Second Spanish Republic is created.

What Happened in 1932 History

Franklin D. Roosevelt is elected as the President of the United States.

What Happened in 1933 History


Strong winds strip the topsoil from the drought affected farms in the Midwest.

Unemployment in the United States reaches its highest level in the winter of 1932 / 1933 with nearly 1 in 3 people unemployed.

The fabled "Loch Ness Monster" is spotted in Scotland for the first time.

The 21st Amendment is passed repealing the 18th Amendment ending prohibition of alcohol.

The machine gun is demonstrated by a Japanese scientist.

Example of a house for sale

What Happened in 1934 History


Disney introduces the character of "Donald Duck" in the animated short "The Little Wise Hen."

Due to poverty around the world, political extremism including Fascism, Nazism, and extreme Communism gains followers.

John Herbert Dillinger ( Public Enemy Number 1 ) bank robber dies after a shoot out with the FBI.

Bonnie Parker and Clyde Barrow die after a shoot out with FBI.

Slum Clearance begins in New York and other major US cities.

The Alcatraz Federal Penitentiary, also known as "The Rock," opens near San Francisco and is used to hold some of the more dangerous and well-known U.S. criminals.

What Happened in 1935 History


The Boulder (Hoover) Dam is completed.

The United States Social Security Act is signed into law.

Legendary player Babe Ruth retires from the sport of baseball after hitting his 714th home-run.

What Happened in 1936 History

The Spanish Civil War begins during July and does not end until 1939.

What Happened in 1937 History


Prince Albert, the Duke of York, becomes King George VI of England in May.

Amelia Mary Earhart disappeared over the Pacific Ocean during a circumnavigation flight attempt.

What Happened in 1938 History


Seabiscuit beats War Admiral in the "Race of the Century."

Orson Welles' radio adaptation of The War of the Worlds is broadcast.

Aviator Howard Hughes flies around the world in 3 days and 19 hours, setting a new record.

Germany begins its persecution of Jews.

The very first "Superman" comic is issued by Action Comics.

Clothing styles were less extravagant for the most part during the 30s. However, you could still tell between the "haves" and "have nots" of this time. Some of the more affluent type of dress was presented by models in issues of the women's magazine Good Housekeeping.
Since the 30s was the decade of recovering from the 1929 Great Depression and stock market crash, companies started researching and implementing cheaper means of clothing manufacturing. New materials that were cheaper to process had been created during this decade to replace more expensive materials. 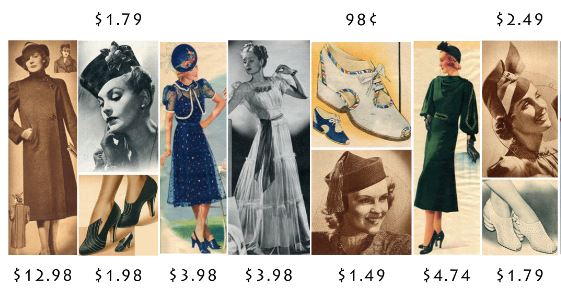 Check out the new toys pages where you can see some of the children's toys that could be found during the Depression Years including Balsa Wood Toy Kits, Flossy Flirt Doll, Electric Train Sets and more 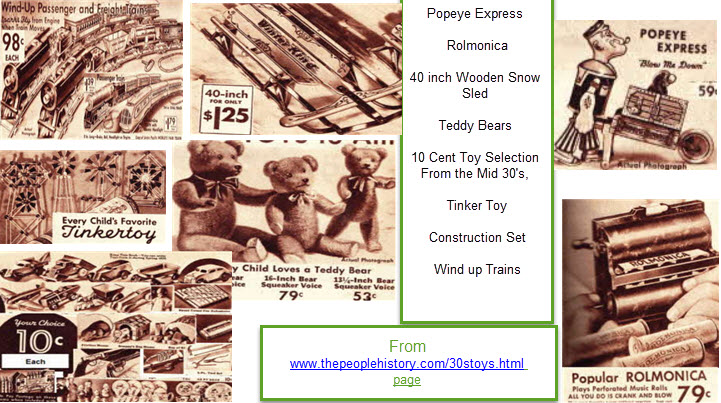 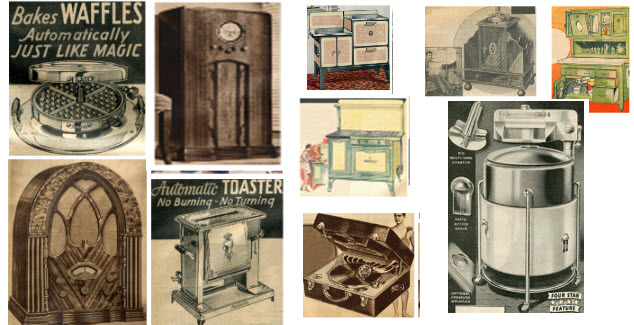 What Happened in 1939 History

Lou Gehrig retires from Major League Baseball after being diagnosed with ALS.

Physicists Albert Einstein and Leo Szilard send a letter to President Roosevelt urging the United States to invest time and money into the secret development of nuclear weapons before Germany developed the technology first.

Sporting Changes In The 30's

National Baseball Hall of Fame starts with the first players to be chosen Ty Cobb, Honus Wagner, Walter Johnson, Christy Mathewson and Babe Ruth
Joe DiMaggio starts his career at the New York Yankees taking the crown over from Babe Ruth who retires.
To help with falling attendance due to the depression, night games are started.
Live Radio broadcasts of baseball games begin to encourage fans to help sell tickets
.

National Collegiate Athletic Association NCAA holds first championship tourney in 1939 which Oregon won.
Association Football (Soccer)
As it's popularity grew, teams in Britain and later the rest of the world bought in managers who instituted a greater degree of Professionalism, tactics and stricter Training regimes taking the game to new levels.
The first world cup is played in Uruguay in 1930 which the home team won.

Other Major Events From The 30's

Shantytowns form consisting of wood and cardboard in the United States. They are often referred to in history as Hoovertowns after President Hoover


The 30's were a time when the depression caused by the wall street crash in late 1929 caused the world to undergo a fundamental change in lifestyles , and as part of the change some new radical politics became popular as seen in the rise of Fascism, Nazism, and Stalinism


The 30's also provided a strange phenomenon never repeated where bank robbers and murderers were thought of as celebrities ( a sort of modern Robin Hood ) which in truthfulness they did not rob from the rich to give to the poor just to rob and murder any who got in their way.

Cars From the 30s

Performance thrills 0 to 35 mph in 6.7 seconds 60 horsepower silent synchromesh gearbox experience the joy of open top driving without stress or strain. Wide Range of Models included in The Chevrolet 6 Series

The wearing of Sunglasses became popular in the 30's

After the fast pace of technology change in the 20's the 30's did still see some advances including
The Jet Engine
Tea Bags Are introduced and sold Commercially
The First Photocopier Invented but not commercial available till 1948
The BBC broadcasts a wider range of Television Programmes until the Outbreak of War in 1939 and TV stays off the air until 1946 , many of the technical staff are used during for the development of Radar for the war effort
The continued increase in use of Radio for entertainment and the refinement of the Airplane for travel
1930's when the airships LZ127 Graf Zeppelin and LZ129 Hindenburg operated regular transatlantic passenger flights between Germany and both North and South America.