>What Happened 90 years ago in 1932 Important News and Events, Key Technology and Popular Culture

In 1932 the economy continued to deteriorate and unemployment increased further to 24.1% , there were few jobs and many ordinary Americans were forced into living in the streets or in old cars. Towards the end of the year in November the American voter used the power of Democracy to show Herbert Hoover what they thought of his term of presidency during these bad times and voted strongly in favor of Franklin D Roosevelt by 472 electoral votes to 59. Around the world changes also occurred when the British jailed the Indian nationalist leader Mahatma Gandhi , also in Britain the first ever splitting of the Atom occurred , and in Russia major problems with the agricultural policy caused mass starvation and death.

What Events Happened in 1932

The Great Depression By Country

More than 24.5% of the population are unemployed

Hooverville's or shanty towns appear around the country built by homeless people using wood from crates, cardboard, scraps of metal, or whatever materials were available to them

43,000 marchers Inc. 17,000 World War I vets ( Bonus Army ) march to Washington DC on May 29 and set up campgrounds demanding early payments of cash bonuses to help survive the Great Depression.

Troops under the orders of General Douglas MacArthur advanced with bayonets and sabers drawn under a shower of bricks and rocks, but no shots were fired. In less than four hours, the troops cleared the Bonus Army's campground using tear gas.

The Revenue Act raised United States tax rates across the board, with the rate on top incomes rising from 25 percent to 63 percent.

The first federal gasoline tax part of the Revenue Act taxes apply of 1 cent per gallon on June 6th .

The Emergency Relief and Construction Act enacted July 21, was the United States's first major-relief legislation to fund public works hoping to put millions back to work, enabled under Herbert Hoover and later adopted and expanded by Franklin D. Roosevelt as part of his New Deal.

Government and Companies cut working hours for those in employment hoping to provide more jobs for those who are unemployed.

Millions are forced to use soup kitchens as a way of life.

The largest National Hunger March during the great depression marches to London in September / October and are met by 70,000 Police including mounted police using force to disperse the demonstrators.

The worst effects of the great depression happen in the north including Yorkshire and Nottinghamshire, Tyneside, Sheffield, Lancashire and Glasgow

200,000 unemployed men are sent to the work camps, which continued in operation until 1939

Unemployment reached a record high of 29%

Due to massive rise in unemployment the radical Nazi Party headed by Hitler came to power in January 1933.

A loaf of Bread 7 cents

A LB of Hamburger Meat 10 cents

Pork and Beans 5 cents can

Other Major Events From 1932

Amelia Earhart completes the first non-stop solo flight across the Atlantic Ocean by a woman during May. Earhart flew her Lockheed Vega plane from Newfoundland to Northern Ireland in just under fifteen hours. The 34 year old pilot was awarded the Distinguished Flying Cross for this accomplishment. She had originally intended to land in Paris, France to emulate Charles Lindbergh’s historic 1927 flight but had to land early due to poor weather and technical issues.

More Information for the Bonus Army

During June , around 20,000 men who were World War I veterans marched to Washington, D.C. in protest. The group, nicknamed the "Bonus Army," went to the Capitol to lobby the government for early payment of their cash bonuses. Due to the Great Depression, many World War I veterans found themselves out of work and in need of assistance. They had been promised bonuses but they were not to be distributed until 1945. The Congress at the time failed to pass the bill that would give them their payments and eventually President Hoover sent the army to disperse the protesters, which ended with the encampments being burned down. Congress was able to successfully award the Bonus Army their early cash bonuses in 1936.

1. Charles Lindbergh's 20-month-old son was kidnapped from the Lindbergh mansion in New Jersey during March .

2. Lindbergh was known as the famed pilot who completed the first solo flight across the Atlantic.

3. His wife discovered the child to be missing and found a ransom note. Investigators struggled to find any clues as to who committed the crime until another note was found asking for $70,000.

4. The Lindberghs delivered the money but did not find their baby at the location that was given to them.

5. Instead, the child's body was found less than a mile from their home and where he was thought to have died on the same night as the kidnapping.

6. There were no new leads on the case for 2 years until Bruno Hauptmann tried using a marked bill from the ransom and was arrested for the crimes, convicted and sentenced to death.

7. The high-profile case was a factor in making kidnapping a federal crime.

More about the Creation of the BBC

The British Broadcasting Company (BBC) debuts its first experimental public television programming during August. The BBC began the broadcasts in the basement of their London headquarters, in what was known as the “Broadcasting House.” The programming was created as a means to test out the abilities of the technology and was produced and engineered by Eustace Robb and Douglas Birkinshaw. The early programming featured performances by dancers and musicians, athletic demonstrations, and art showcases. As the technology of television broadcasting advanced in the mid-1930s, these programs were replaced by the official “BBC Television Service” in November of 1936.

Mahatma Gandhi completed a six day “fast unto death” starting on September 16th to protest the new British-backed laws that aimed to separate India’s electoral system by castes. The changes would divide lower and higher castes, giving them separate political representation within the government. Gandhi believed the change would permanently divide India and promote an unfair system. Gandhi’s fast began at Yerwada Central Jail in Pune, where he had been imprisoned since January, but he was moved to a more private location after a few days. Gandhi’s fast was successful in that the government agreed to keep India’s castes electorally undivided.

The Stimson Doctrine is created by Secretary of State Henry Stimson.

More Information for the Stimson Doctrine

The Stimson Doctrine was adopted by the United States government during January . Created by Secretary of State Henry Stimson, the doctrine stated that the United States would not recognize any territorial changes created by Japan's invasion and capture of Manchuria in China. Despite the statement, Japan continued to expand its control over parts of China and increased its aggression by bombing Shanghai. The ineffectiveness of the Stimson Doctrine was considered one of the many points in international politics during the early 1930's that would eventually lead to World War II.

The Kingdom of Iraq becomes independent from Great Britain at the urging of King Faisal on October 3 News Events. Iraq had been under British control since 1920 after the end of World War I and before that it had been a part of the Ottoman Empire. At the same time that they became independent it was also admitted to the League of Nations. Iraq remained as a Kingdom until 1958 when the monarchy was overthrown and a Republic was declared.

The Winter Olympics were held in Lake Placid, New York during February. A total of 252 athletes (231 men, 21 women) from just 17 different countries attended these games and participated in the 14 events. Due to the Great Depression, funding for these games was difficult to put together and some of the land used for events was donated. The United States won the most medals with 12, Norway came in second with 10, and Canada was third with 7 medals. These were the first Olympic Games to feature the 3-tier staggered medal podium.

As the collapse of the Weimar Republic was on the horizon, German President Paul von Hindenburg was re-elected in April, defeating Adolf Hitler in a run-off election. The 84-year-old Hindenburg ran in an attempt to lessen the Nazi party’s influence on Germany as he was believed to be the only politician popular enough to defeat Hitler. While his victory temporarily blocked the Nazis from taking over Germany, it was short-lived as Hitler maneuvered himself into a position of power when he was appointed Chancellor in 1933. Hindenburg soon began dismantling civil liberties and then died in 1934, giving Hitler the opportunity to consolidate power and establish a Nazi dictatorship.

The Summer Olympics, officially titled the “Games of the X Olympiad,” began in Los Angeles, California during July. These were the ninth modern games to be held and 37 countries participated. The number of participating countries was lower than usual due to high travel costs during the Great Depression. A total of 1,334 athletes participated in 117 events. These were the first games to feature the photo-finish camera. The United States took home the most medals with a total of 103, followed by Italy with 36 and Finland with 25. American track and field star Babe Didrikson was the break-out athlete of these games, winning gold medals in the 80m hurdles and javelin throw and a silver medal in the high jump.

The radio program Buck Rogers of the 25th Century makes its debut.

1. The Buck Rogers character was taken from stories in pulp magazines and newspaper comic strips from the late Twenties. The stories that were featured on the program centered on Buck who was a modern man from the present time who had fallen into a state of suspended animation by accident, to be later discovered and awakened in the year 2419. The show focused on him discovering the world of the future and having adventures.

2. The old time radio program "Buck Rogers of the 25th Century" debuts on November 7, on the CBS radio network.

4. The program was later adapted to films and television in the Fifties and 1970s.

The Parking meter is invented in Oklahoma

Just a couple of hits from that year

" All Of Me " by Louis Armstrong and His Orchestra

"Brother, Can You Spare A Dime?" Bing Crosby

A series of Tornadoes on March 21st killed at least 184 persons in Alabama, Georgia Tennessee, Kentucky and South Carolina.

Following the Wall Street Crash 2500 banks in the US fail 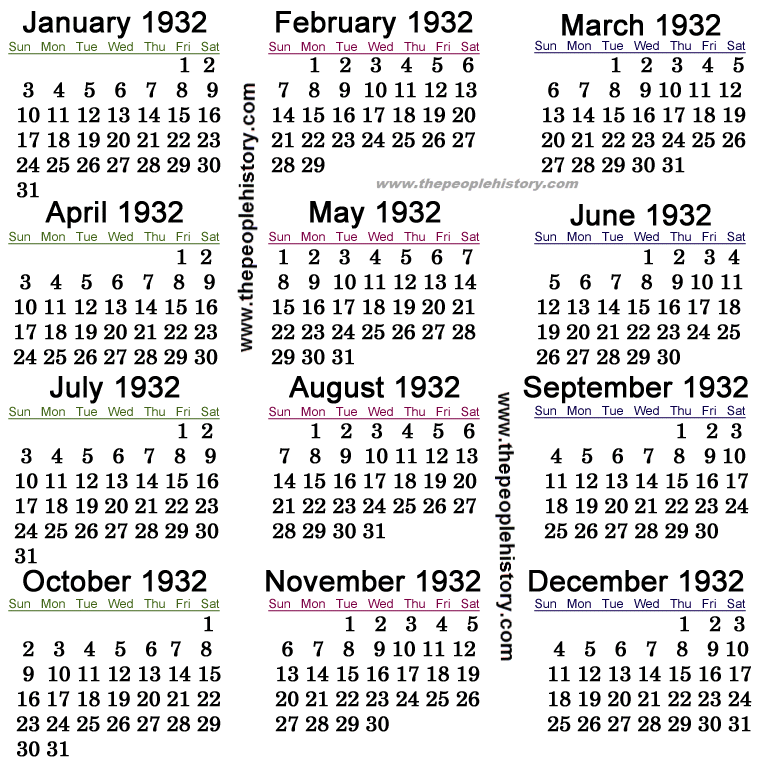