1930 Major News Stories including first year of the great depression, Prohibition Enforcement is Strengthened, Graf Zeppelin Airship Completes Flight From Germany to Brazil, Mahatma Gandhi begins 200 mile march to the salt beds of Jalalpur to protest British Rule, 1350 banks in the US fail, Smoot-Hawley Tariff bill signed raising duties on imports, Public Works programs begin, ... 1930 was the first year of the great depression , television was just starting to gain momentum but the high unemployment of 8.9% caused problems in every area of life . This was felt worldwide and many countries could see political change starting for example Germany where Adolf Hitler's National Socialists become the second largest party.

What Events Happened in 1930

More Information and Timeline for the Smoot-Hawley Tariff

1. The world economy begins to enter the Great Depression in late 1929 when the stock market crashes.

2. Politicians panic and start to turn to protectionism in order to try to prevent further loss of American jobs and commerce from competition abroad.

3. US Senator Reed Smoot begins calling for an increase in tariffs in 1929.

4. The Tariff Act is passed by the United States Congress and it proposes an increase of tariffs on foreign imports.

5. 1,028 Economists try to convince President Hoover to veto the tariff bill, saying it will only cause more damage to the economy.

6. Despite personally disagreeing with the increase in tariffs, Hoover signs the bill due to party pressure and pressure from some business leaders.

7. Foreign countries retaliate with their own increased tariffs and trade alliances shift as an impact of the bill.

8. Both Reed Smoot and Willis Hawley lose their bids for re-election in 1932, partially due to the failure of the tariffs.

9. The tariffs were lowered under President Franklin Roosevelt's first term with the Reciprocal Trade Agreement Act of 1934.

10. The Smoot-Hawley Tariff Act raised US tariffs on foreign imports to one of their highest ever levels in the country's history. While the tariffs did not cause the Great Depression, many people thought that they contributed a lot to the failing economy. Many historians agree that while they were not helpful in repairing the economy during that time period, they did not have as large an impact as was first believed.

India -- 200 mile march to the salt beds of Jalalpur

Mahatma Gandhi and his followers begin a 200 mile march to the salt beds of Jalalpur.

More Information and Timeline for the Salt March

1. The Salt March was Mohandas Gandhi's non-violent protest that took place from March to April they marched from Sabermati to Dandi.

2. This was the first of his acts of civil disobedience against British rule in India.

3. There was a British monopoly on salt and India was not allowed to produce or sell salt independently.

4. The march started on March 12th, on foot with a few dozen followers.

5. Hundreds of others joined in as they stopped in each town along the way.

6. They finished their journey on April 5th after traveling 240 miles.

7. On April 6th, Gandhi and others picked up salt on the shore of the Arabian Sea to "produce salt" and technically broke the law.

8. No one was arrested in this first act of civil disobedience.

9. Gandhi continued his protests and civil disobedience against the salt tax for two months afterwards.

10. He was arrested in May after announcing plans to march on the Dharasana Salt Works.

11. News of Gandhi's arrest motivated thousands more to join in protest and the planned march took place on May 21st.

12. Up to 2,500 of the peaceful protesters were attacked by police.

14. In January of 1931 , Gandhi was released from prison and a truce was declared between himself and the Viceroy of India, Lord Irwin.

The United States and the world suffer from the Great Depression.

More Information and Timeline for the Great Depression

3. The Federal Reserve cuts interest rates to 4 percent, down from 6 percent.

4. Consumers and businesses panic and pull their money out of banks after the stock market crash.

5. The Worldwide economic decline reaches its worst point in 1933.

A loaf of Bread 9 cents

A LB of Hamburger Meat 13 cents

Other Major Events From 1930

Haile Selassie I becomes the Emperor of Ethiopia.

Tafari Makonnen, also known as Haile Selassie I, became the Emperor of Ethiopia during November . He was known for his efforts to bring Ethiopia into the international community by joining the League of Nations and, later, the United Nations. Selassie remained in power until 1974, despite having been exiled between 1936 and 1941. Selassie, while praised for his attempts to modernize the country was also criticized for maintaining poor political and civil rights standards.

Britain's Largest Airship the R101 crashes in Beauvais, France, killing all on board.

2. The airships were built with the purpose of long distance travel for civil purposes within the British Empire, such as passenger travel and transporting mail. At the time it was the largest airship ever built.

3. The R-101 crashed on October 5th over France while on its very first overseas trip.

4. It was carrying 54 people and of these only 6 survived the crash.

5. The tragedy was one of the biggest of its kind and led to the eventual abandonment of the British on airship development.

The very first FIFA World Cup takes place during July in Montevideo, Uruguay. The World Cup was envisioned as an international tournament for soccer after it was announced that the sport would be dropped from the upcoming 1932 Olympic Games. The very first games in the World Cup were played between France against Mexico and the United States against Belgium. The entire tournament was won by the host Uruguay after they defeated Argentina. Unfortunately, several of the top European teams, including England, Germany, Italy, Spain, and Holland, missed the inaugural cup due to the Great Depression and the high cost of travel.

The cartoon character of Betty Boop makes her debut in "Dizzy Dishes."

The character of Betty Boop makes her debut during August in "Dizzy Dishes" a part of Max Fleischer's "Talkartoon" animated series. The character was originally designed by Grim Natwick who would go on to become a lead animator in the production of other successful characters like Mickey Mouse, Felix the Cat, and Popeye. Betty Boop was believed to be modeled after several actresses that embodied the popular "Flapper" style of the Twenties, such as Helen Kane and Clara Bow. She was voiced by several notable actresses including Margie Hines, Ann Rothschild, and Mae Questel. The character soon grew in popularity throughout the 1930's and has remained a beloved cultural staple.

The Argentinean government is overthrown by a coup d'état on the 6th of September . Hipólito Yrigoyen was the president of the country but he was quickly forced out of power by General Jóse Félix Uriburu as General Uriburu led his loyal troops to the capital and were met with very little opposition to the coup. Yrigoyen had been democratically elected in 1928, but had become unpopular as the Great Depression hit the world economies, causing high inflation and unemployment in Argentina. Future president Juan Perón was involved in the coup.

Pluto is discovered during February of 1930. It was discovered by astronomer Clyde W. Tombaugh at the Lowell Observatory in Flagstaff, Arizona. It was originally thought to be the ninth planet of the solar system. The discovery was publicly announced a month later on the anniversary of the discovery of Uranus. Tombaugh found Pluto by using a blink microscope to switch rapidly between sets of photographic plates to detect subtle changes and movements, a new technique at the time. In 2006, the International Astronomical Union downgraded Pluto from a planet to a dwarf planet.

1. The Chrysler Building is completed and opens during May of 1930.

2. It was designed in the popular Art Deco style by architect William Van Alen.

3. It was the tallest building in the world at a height of 1,046 feet for about a year until the Empire State Building was completed in 1931 .

4. The Chrysler Building was built for Walter Chrysler and it functioned as the headquarters for the Chrysler Corporation until the 1950s.

6. Since its completion it has become an iconic part of the New York City skyline as well as a prime example of the Art Deco architectural style.

Following the Wall Street Crash 1350 banks in the US fail

The City of Constantinople in Turkey changes its name to Istanbul

US Unemployment figures show 8.7% of the population are unemployed

Prohibition Enforcement is Strengthened and moved to the justice department

Amy Johnson lands in Darwin Australia on May 24, becoming the first woman to fly solo from England to Australia

For the first time anywhere in the world, a television drama is broadcast. The drama is a production of Luigi Pirandello's The Man With the Flower in His Mouth; it is broadcast by the BBC from Baird's studios at 133 Long Acre, London.

Sliced bread Goes on Sale in England for the first time

The Chrysler Building in New York is Completed

FILM All Quiet on the Western Front

The US Population reaches 123 million

Frozen Foods are sold commercially for the first time 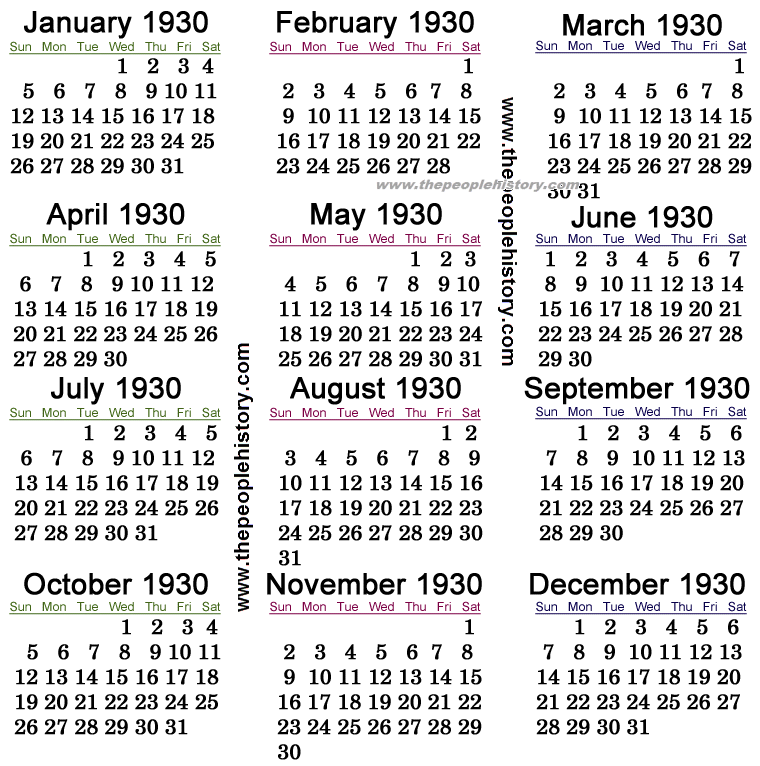