What Happened in 1935 Important News and Events, Key Technology and Popular Culture

1935 The years of depression continued with unemployment still running at 20.1% , and the war clouds were gathering as Germany began to rearm and passed the Nuremburg laws to strip Jews of their civil rights, and Mussolini's Italy attacked Ethiopia. The Gallup Poll was introduced and a reformed drinker named Bill Wilson formed Alcoholics Anonymous on June 10th , also for the first time a completely synthetic fibre was produced called nylon by a Dupont chemist. Also this was the year of the birth of "Swing" by Benny Goodman and the world was ready to boogie. Persia is renamed to Iran.

What Events Happened in 1935

The Boulder (Hoover) Dam is completed.

More Information and Timeline for the Hoover Dam

1. The Reclamation Act is signed by President Theodore Roosevelt in 1902, it allows engineers to research how to control and use the Colorado River.

2. In 1920 , the US Congress passed the Kinkaid Act, which asked for the Secretary of the Interior to look into the problems of the Imperial Valley.

3. The Fall-Davis report is given to the US Congress and it recommends building a dam on the Colorado river near Boulder Canyon in 1922.

4. The Boulder Canyon Project Act is passed by Congress and signed by President Calvin Coolidge in December of 1928.

5. Herbert Hoover takes over negotiations about the proposed dam and it moves forward when an agreement is reached between the seven basin states in 1929.

7. Construction begins in 1932 when the Colorado River is diverted around the construction site.

8. On June 6th, 1933, the first concrete is poured for the construction of the Hoover Dam.

10. The Boulder (Hoover) Dam is dedicated on September 30th .

More Information and Timeline for the Emergency Relief Appropriation Act

1. The Emergency Relief Appropriation Act created the Works Progress Administration, one of the most well-known programs to come out of FDR's New Deal.

2. The WPA was a work-relief program that employed people to build airports, roads, bridges, public buildings and public parks.

3. It was renamed the Works Projects Administration in 1939 and was decreased in size.

4. In 1943 the public program was ended because of WWII and a worker shortage.

5. Overall, it had offered employment to nearly 9 million people during its run and spent over eleven billion dollars.

6. The WPA employed both men and women and it also contributed to the arts in the USA by employing artists to create sculptures and mosaics that would decorate parks and public buildings.

A LB of Hamburger Meat 11 cents

Other Major Events From 1935

President Roosevelt signs the US Social Security Act on October 22 News Events Providing Unemployment compensation and pensions for the elderly.

More Information and Timeline for the Social Security Act

1. Several states begin enacting old-age pension laws and unemployment insurance throughout the early 1930s in the wake of the Great Depression.

3. The Committee on Economic Security is created by President Roosevelt in June of 1934. The committee was created with the intention of studying economic security problems and recommending legislation regarding those problems. The creation of this committee was FDR's Executive Order Number 6757.

5. The Economic Security Bill is then introduced to the US Congress on January 17th . The Committee on Economic Security had recommended a Federal old-age insurance, unemployment insurance through the States, public health programs for women and children, and other general social welfare ideas.

6. The name of the Economic Security Bill was changed to the Social Security Bill in March and it was then re-introduced to the US House of Representatives in April, replacing the former bill.

7. On April 15th, the Social Security Act was passed in the House of Representatives. It was then passed by the US Senate on June 19th . It was signed by President Roosevelt on August 14, becoming law.

8. Authority was given to create and assign Social Security numbers after the Department of the Treasury approved the decision in November of 1936.

9. The first taxes to contribute to Social Security were collected in 1937, the same year that the first one-time payments were made.

10. Originally, the Social Security program was meant to help with state welfare programs and a Federal old-age pension plan. The program has changed and varied throughout the years. It wasn't until 1994 that the Social Security Administration became and independent agency.

The Great Plains are struck by one of the worst Dust Storms in U.S. history during April.

On April 14th the Great Plains were struck by one of the worst dust storms in United States history. The storm would come to be known as "Black Sunday" as it passed across the region, further devastating farms and infrastructure already ravaged by the Dust Bowl. The day started calmly and the weather seemed clear and many local people spent the day outside and welcomed the day as a break from the constant dust storms of the previous month but by the afternoon the weather quickly changed and a massive black cloud swiftly made its way into the region. The storm caught many people off guard and they had to race against the storm to find shelter.

The Second Italo-Ethiopian War begins during October when Italy invades Ethiopia in an attempt by Mussolini to expand the Italian empire. The invasion of Ethiopia by Italy highlighted the ineffectiveness of the League of Nations. The League had been unable to forestall Italy's attack and unable to agree on what actions to take against the belligerent nation. The League of Nations tried to sanction Italy for the conflict but the sanctions remained largely ineffective. The war ended in May of 1936 when Italian troops took the capital of Addis Ababa forcing the Ethiopian Emperor, Haile Selassie, into exile. Italy continued to occupy Ethiopia until World War II when the nation was liberated by Allied troops in 1941 and Selassie returned to power.

More Information and Timeline for the Your Hit Parade

2. The first number one song on the first episode was "Soon" by Bing Crosby

4. The show was a 1 hour show playing the 15 most popular songs from that week

The show ran on radio from till 1955 it was carried on both NBC and CBS over the years it changed to a countdown format , the show started on NBC television in 1950 and ran to 1959

1. The groundbreaking female aviator, Amelia Earhart, became the first person to fly solo across the Pacific ocean on January 11, as she traveled from Honolulu, Hawaii to Oakland, California.

2. This feat also made her the first person to have flown solo across both the Atlantic and Pacific oceans.

3. Earhart had began her flight career in 1921 and had set herself a goal of flying solo around the world.

4. Unfortunately, in 1937, as she was nearing completion of her goal, her plane was lost on its way to a small Pacific island and she was never found or seen again, and presumed dead.

More Information and Timeline for Mickey Mouse appears in color for the first time.

The iconic character Mickey Mouse appears in an animated short in technicolor for the first time with the release of "The Band Concert" on February 23, . The animated short film featured Mickey Mouse as he tried to conduct a concert of the William Tell Overture but is largely unsuccessful as he is continually interrupted by Donald Duck and other distractions. While the film is only a total of nine minutes long it is considered, by many modern animators, to be one of the greatest cartoon films ever made. Mickey Mouse creator Walt Disney produced the animated film, Clarence Nash voiced Donald Duck, and it was directed by Wilfred Jackson.

More Information for the China Clipper.

Pan-American Airway's China Clipper, a Martin M-130 flying boat, went on the first United States Trans-Pacific airmail delivery flight during November . The plane, piloted by Edwin Musick, left from Alameda, California and landed in Manilla, Philippines, its final destination, after seven days of travel. The first Trans-Pacific airmail service successfully delivered 110,000 pieces of mail and after its first delivery the China Clipper picked up mail intended for the United States and returned home another seven days later with the commercial seaplane having successfully completed the full trip.

The Looney Tunes character of "Porky Pig" was first introduced.

In March , the popular Looney Tunes character "Porky Pig" made his first appearance in an animated short called "I Haven't Got a Hat." The character was designed by the animator Bob Clampett and was originally voiced by Joe Dougherty who was then replaced by Mel Blanc in 1937. Porky Pig was the first widely popular Looney Tunes character to be created by Warner Brothers and was recognized by his signature comedic stutter and shy demeanor. Not too long after Porky's debut, they introduced his comedic foil with the creation of Daffy Duck in 1937 and by 1940 their newest character, Bugs Bunny, became the star of the show.

FDR signs the Neutrality Act into law, preventing the U.S. exportation of war related items to nations at war.

More Information for the Neutrality Act.

United States President Franklin D. Roosevelt signed the Neutrality Act into law during the month of August. The Neutrality Act stopped the exportation of war items like arms and ammunition from the United States to nations at war. The act was born out of the desire to keep the United States out of any impending European conflicts. A wave of Fascism had begun sweeping over Europe as several dictators took power and started to gear up for war. American citizens were afraid of becoming involved in these conflicts as the devastating costs of World War I were still in the public's mind. The president had initially opposed the Neutrality Act but eventually bent to the will of the people in support of taking these, ultimately useless, steps.

In July , Penguin releases their first paperback books, revolutionizing the publishing industry by bringing affordable books to the English-reading masses. The Penguin publishing company was created in England by Allen Lane who had been previously working for the publishing company "The Bodley Head." He had wanted to create affordable and easily accessible versions of contemporary literature after having been disappointed by the selection of available affordable non-fiction and fiction works at the time. During July the company released their first ten paperbacks and within a year they had sold over one million books in England.

Babe Ruth hit the 714th and final home run of his career.

1. George Herman Ruth Jr. Began playing professional baseball at the age of 19 when he was signed to the Baltimore Orioles in 1914.

2. He was soon sold to the Boston Red Sox where he began to develop into a star player until he was traded to the New York Yankees in 1919.

3. Ruth remained with the Yankees until 1934 where he dominated the game, helping the team win four World Series and seven Pennants.

5. He spent his final season with the Boston Braves and upon his retirement held a 714 home run record that was broken by Hank Aaron in 1974, nearly forty years after it was set.

The Peoples car ( Volkswagen Beetle ) is launched in Germany

Toyota Cars are launched in Japan

Helicopter USA by Igor I. Sikorsky )

1,200,000 people face starvation in Illinois due to lack of funding.

The Luftwaffe is created as Germany's air force and Germany announces rearmament in violation of the Versailles Treaty.

Persia is renamed as Iran

Persia is renamed as Iran

Compulsory Driving Test is introduced in England on June 1st 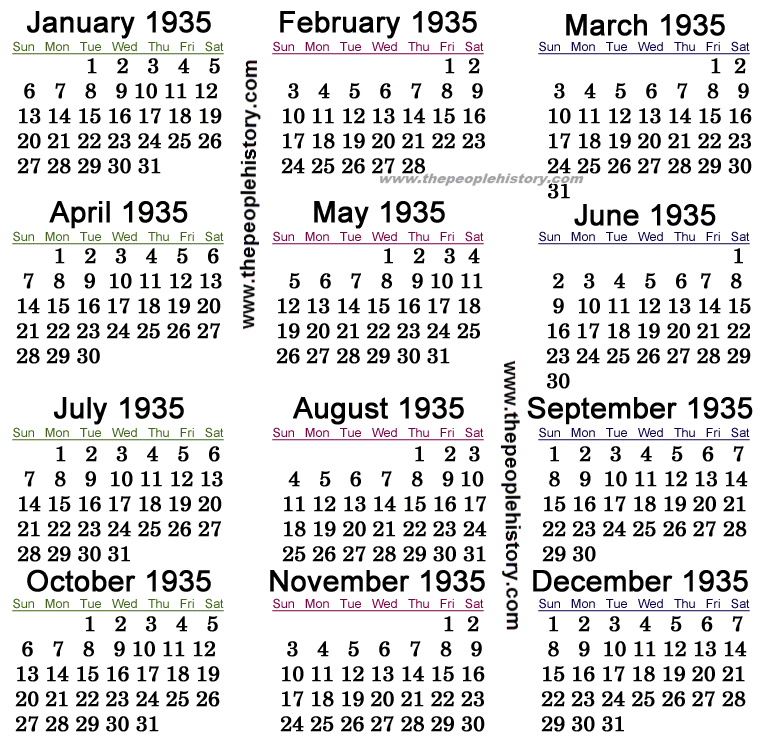