What Happened in 1936 Important News and Events, 85 years ago Key Technology and Popular Culture

1936 The depression lingered on with unemployment continuing to fall to 16.9%, and Hitlers Germany continued to show the world it was not scared of anyone but the 36 Olympics caused Hitler humiliation when his Aryan Supermen were dominated by the great Jesse Owens. Germany's Hitler, Italy's Mussolini and Japan formed an alliance which would show it's real reason for creation in World War 11. Many of Americas unemployed travelled to California hoping to get work but the the local police chief posted guards at main entrance points blocking the " undesirables" this was illegal and later stopped. The Boulder Dam was completed later renamed the Hoover Dam.

What Events Happened in 1936

1. King George V dies in January only a year after celebrating his Silver Jubilee.

3. Throughout his youth Edward had various affairs with married women. In 1930 he had fallen in love with a married woman named Wallis Simpson.

4. Simpson got divorced and it was clear that Edward was going to marry her.

5. Wallis Simpson would not have been an appropriate Queen as she was a two-time divorcee and both of her previous husbands were still alive. When faced with the prospect of choosing the crown or love, Edward made the decision to abdicate and renounce his claim to the throne.

6. Edward ordered the Instrument of Abdication on December 10th and it became effective on the next day. He also gave up any claim that his children might have to the throne. He had never been crowned King and he had ruled for a total of three-hundred and twenty-five days.

7. His brother Albert became King next and took the name George VI.

8. Edward married Wallis Simpson in 1937 and he became the Duke of Windsor after his abdication.

9. Edward and Wallis lived abroad for the rest of their lives in places like France and the Bahamas. He died in 1972 at the age of seventy-eight.

10. Some controversy surrounded the Duke and his political beliefs as he had made visits to Nazi Germany and had reportedly supported Hitler. Some people believe that his abdication was less for love and more to prevent a King with extreme political beliefs from taking the throne during a time of political crisis and impending war. He had also reportedly showed support for the unemployed and poor.

2. Jesse Owens ties one world record and breaks five world records in May of 1935 within forty-five minutes at the Big Ten Intercollegiate Championship.

3. Summer Olympics were held in Berlin, Germany. Germany's leader, Adolf Hitler, had hoped that the Germans would dominate the games and therefore back up his claims of racial superiority.

4. Jesse Owens, an African-American man, dominated the track and field events at the Berlin Olympics. Here is a break-down of his Olympic accomplishments in Berlin.

5. Owens managed to defy Hitler's racial claims and was thought of as a hero by those at the Berlin games and abroad.

6. While Owens was hailed as a hero by the people when he returned home to the United States, he still faced prejudice and discrimination in a racially segregated country. Owens was also denied recognition by US leaders and was effectively ignored by then President Roosevelt and his successor Truman.

7. Owens ended his athletic career after the Olympics . He died at the age of eighty from lung cancer.

A LB of Hamburger Meat 12 cents

Other Major Events From 1936

1. The British Broadcasting Company is formed and the BBC begins to broadcast a regular daily radio service across the United Kingdom in 1922.

3. The first television broadcasts were made by John Logie Baird using BBC transmitters and frequencies starting in 1929.

4. Simultaneous picture and sound television broadcasts began in 1930 with the opening of a second BBC radio transmitter.

5. By 1932, the BBC took over the responsibility of making television programs from Baird after they built a television studio.

The Rural Electrification Act becomes law, bringing electricity to the more remote parts of the country.

The Rural Electrification Act was passed by Congress and signed into law by President Franklin D. Roosevelt during May . The law provided low-cost loans to rural farmers to help them create cooperative electric power companies. The cooperatives would then bring electricity into homes in the rural regions of the United States. While electricity was quite common in U.S. cities during this time, much of rural America did not have access to it yet. Lawmakers believed that by bringing it to less densely populated areas the people living there would have an improved quality of life. The act revolutionized rural America by bringing more of the country into the modern world and equalizing the opportunities of urban and rural communities.

The German airship "The Hindenburg" had its first public flight during March . It was launched from Friedrichshafen, Germany and the inaugural flight was used as a propaganda tool by Nazi Germany. The Hindenburg airship toured around Germany with the Graf Zeppelin airship for several days dropping leaflets asking the public to support the German occupation of the Rhineland, a violation of the Treaty of Versailles. The Hindenburg then became a commercial airship that was used to ferry passengers between the United States and Germany until it was famously destroyed when it burst into flames while attempting to land in New Jersey in 1937.

The Spanish Civil War begins and Francisco Franco is named the Head of State.

General Francisco Franco was named the Head of State in Spain for the Nationalist government during October . The Spanish Civil War had started in July when the rebel Nationalists, headed by Franco, began an armed uprising against the Republican government. The civil war continued for more than two years and Franco did not defeat the Republicans until March of 1939 when the Nationalists took Madrid and the civil war ended. General Francisco Franco continued to hold his position as the dictator of Spain until his death in 1975.

Aviator Beryl Markham becomes the first woman to fly solo across the Atlantic Ocean from East to West during September . Markham was born in Britain but lived most of her life in Kenya. As a young woman she earned her pilot's license and worked as a commercial pilot. Markham set out from England in her Vega Gull plane on what would become the first non-stop solo transatlantic crossing from East to West by a female pilot and the first transatlantic crossing from East to West to leave from England. She flew for over twenty hours and was forced to stop at Cape Breton Island in Canada due to low fuel just short of her original intended destination in New York.

The Crystal Palace in London, England is destroyed in a huge fire on November 30th . The building’s manager Henry Buckland noticed a small fire during the night while walking his dog and called for help. Over 80 fire engines and 400 officers came to the scene but by the morning most of the building had been destroyed. The cause of the fire was unknown but was thought to be accidental. The historic glass and steel structure had been build in 1851 for the “Great Exhibition,” one of the first World’s Fairs. After the Exhibition the Crystal Palace was moved and turned into a park. It proved difficult to maintain due to its large size and by the 1910s it had fallen into disrepair.

United States --- Gone With The Wind

The book Gone With The Wind is Published on June 30th.

More Information for Gone With the Wind.

In June , Margaret Mitchell's epic novel "Gone With the Wind" is published in the United States. The book focused on the life of fictional Southern belle "Scarlett O'Hara" in Atlanta prior to the outbreak of the Civil War, during the war, and during reconstruction. The book soon became one of the best-selling novels in history, winning the Pulitzer Prize in 1937. Mitchell also faced criticism over her glorified portrayal of the Civil War and slave-owners in the South. By 1939 it had been made into a very popular, Academy award-winning, classic American movie.

The first "The Phantom" comic strip is published.

"The Phantom" comic strip is published for the first time as a daily newspaper comic strip during February . Created by Lee Falk, the Phantom is considered a seminal character in the development of modern superhero characters. The Phantom is believed to be the first comic hero to wear a form-fitting costume with a mask that hides the hero's pupils, both standard features of many modern hero characters. Falk wrote the comic up until his death in 1999 when it was taken over by several other writers. The story revolved around the "Phantom" who was a mysterious hero that dedicated himself to fighting injustice in the fictional African country of "Bangalla." The comic is still being created today and over 2,000 issues have been published.

The Tupelo-Gainesville tornado outbreak occurs during April when several strong tornadoes spawned throughout the southern United States over four days. About seventeen tornadoes struck Arkansas, Kentucky, Alabama, South Carolina, Tennessee, Georgia, and Mississippi, with Tupelo, MS and Gainesville, GA being hit by some of the strongest storms. The series of tornadoes devastated the region with over 450 total deaths and with estimates of up to 3,500 people injured. The cost of the damage was thought to be in the millions of dollars and the severity of the situation encouraged the country to develop more sophisticated tornado warning systems in the following years.

The book Gone With The Wind is Published on June 30th

The Charge of the Light Brigade

President Roosevelt is re-elected for a second term

The Crystal Palace Is Destroyed By Fire on November 30th

Japanese Marines take control of the Shanghai district of China

Following the depression worldwide dictatorships are established in Mexico, Bulgaria and Peru

The Winter Olympic Games are held in Garmisch-Partenkirchen, Germany 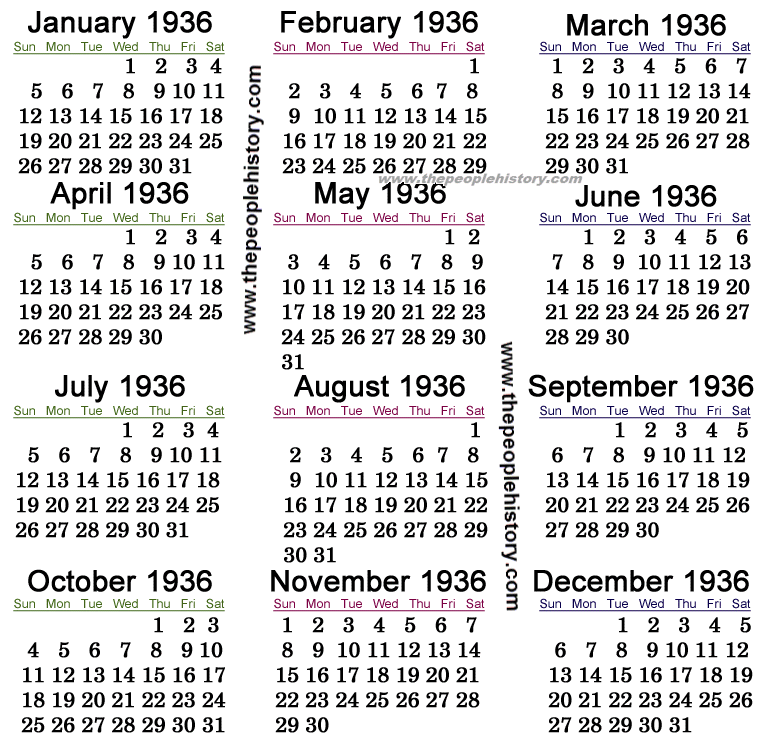