1931 saw the doubling of unemployment to 16.3% , and everybody realized that the stock market crash of 1929 was having far reaching effects . The US government started making some progress on the mob and a notable success was the conviction of Al Capone on tax fraud charges which got him an 11 year prison sentence in Alcatraz. Many car manufacturers also went out of business as people did not have money to buy new cars. One of the few successes was the completion of the Empire State building , and in Las Vegas the small local community made the decision to legalize gambling . Nature even conspired to make things worse by causing a serious drought in the Midwest which in turn made food more expensive and turned some area's into dust bowls.

What Events Happened in 1931

The Great Plains suffers devastating droughts, dust storms, and soil erosion during the Dust Bowl years. Farms suffer and massive ecological damage is done to the Midwestern and Southern Plains areas of the country.

More Information and Timeline for the Dust Bowl

1. The United States Congress passes the Homestead Act of 1862 and settlers move into the Great Plains and begin farming the lands.

2. Farmers plant dry wheat in the Great Plains prairies and continue to plow and plant millions of acres. This over-working of the land is one of the main reasons that the Dust Bowl became so devastating and lasted so long.

3. A drought hits the Midwestern and Plains states this year, dust from the overworked land begins creating dust storms.

4. The drought worsens in 1932 and more dust storms are reported.

5. The drought continues in 1933 and many farmers face foreclosures as the Great Depression also worsens. The Emergency Farm Mortgage Act and the Farm Credit Act are created to help save farms.

6. Many farmers flee from the Plains and abandon their farms in hopes of finding work in California.

7. The drought becomes the worst in US history during 1934 and a total of twenty-seven states are affected by it.

8. The Taylor Grazing Act goes into effect in 1934 and created heavily monitored grazing districts. It was used to help stem the damage caused by over-grazing the land.

9. The Drought Relief Service is created and starts buying cattle from struggling farmers in 1935.

10. The Emergency Relief Appropriation Act is created in April of 1935 and it forms the Works Progress Administration as well as providing hundreds of millions of dollars of drought relief.

11. The Black Sunday dust blizzard hits on April 14th, 1935 and is the worst dust storm of the Dust Bowl Years. It does massive amounts of damage to lands and property.

12. The Soil Conservation Service is established with the aim of developing topsoil preservation programs in 1935.

13. Recovery efforts continue in 1937 with the Shelterbelt Project. This project would utilize the Civilian Conservation Corps to plant native trees throughout the Great Plains, another program to help stop soil erosion.

14. The drought still continues in 1938, work intended to help with the problems caused by the drought and programs aimed at preventing further land issues continue as well.

15. The drought ends in 1939 and the Plains states continue to recover and re-work the land with more soil-friendly and sustainable farming techniques and a better understanding of how to farm those lands.

Empire State Building is completed and opens on May 1, and becomes the tallest building in the world , it is a 102-story contemporary Art Deco style building in New York City

More Information and Timeline for the Empire State Building

1. The Empire State building was designed by William F. Lamb.

2. Excavation of the building site started on January 22nd of 1930.

4. The Empire State Building officially opened on May 1st, and it was the world's tallest building until 1970.

A LB of Hamburger Meat 11 cents

Other Major Events From 1931

2. The cities that were worst effected included Napier and Hastings.

4. On February 13th, 10 days later, there was a large 7.3 magnitude aftershock that contributed to the heavy damage in the region.

5. There were more than 500 aftershocks from the earthquake that lasted through 1934.

6. It was the worst natural disaster in New Zealand's recorded history.

The "Star Spangled Banner" is officially adopted as the national anthem of the United States during March . The song's lyrics were from a poem written by Francis Scott Key in 1814 during the War of 1812 while the music was taken from song "To Anacreon in Heaven" which was believed to have been written some time in the late 1700s by British composer John Stafford Smith. The notoriously difficult to sing anthem had previously been used by the United States Navy in the late 1800's but it did not become the official national anthem until the United States Congress passed a resolution and President Hoover signed it into law . Prior the country did not actually have an official national anthem.

More Information and Timeline for the Second Spanish Republic

2. Several Republican factions join together with the intention of overthrowing the Spanish monarchy and they form the Pact of San Sebastian.

3. Republicans won the April 12th, municipal elections in a landslide.

4. On April 14th, the Second Spanish Republic was proclaimed.

5. King Alfonso XIII goes into exile after the Second Spanish Republic is created.

6. A provisional government is then formed under Niceto Alcala-Zamora.

7. A new constitution is drafted in June and it is the law of the land by December of that year.

8. A civil war erupts in Spain, however the constitution of the Second Spanish Republic remains in effect until 1939 when the Spanish Civil War ended.

Charlie Chaplin’s film “City Lights” premiered in January. The film was written, directed, and produced by Chaplin, who also starred as his iconic character “The Tramp.” Despite talking pictures replacing silent films as the popular option for entertainment for about three years, Chaplin chose to create “City Lights” as a silent film. In the film, the Tramp falls in love with a blind flower girl who mistakes him as a wealthy man and after befriending a drunken millionaire he gets the money to pay for a surgery to cure the girl’s blindness. The film was immediately successful and it is considered to be Chaplin’s best film by many critics as well as one of the best films of all time.

United States -- Round the World Flight

Aviator Wiley Post and navigator Harold Gatty began their record-breaking around-the-world flight during June . Post and Gatty took off from New York in their plane, the Winnie Mae, and made several stops as they traveled around the globe. Trouble with their propeller held them up in Alaska and after they had it replaced they resumed their journey. Post and Gatty successfully completed their trip of over 15,000 miles returning to New York in just over 8 days, eclipsing Hugo Eckner's previous record of 21 days in the Graf Zeppelin. Post would later become the first person to successfully complete a solo around-the-world flight two years later in 1933.

Japan invades Manchuria in China after the Mukden Incident.

More Information for the Mukden Incident

The Mukden Incident and the Japanese invasion of Manchuria in China take place during September . The Mukden Incident happened when Japanese troops were sent into Manchuria under the pretense of protecting a Japanese controlled railway where there had been an explosion. Japan soon took over the entirety of Manchuria. Japan had already been occupying nearby Korea and was worried that the potential unification of China could endanger their control on the region. In order to maintain a neutral zone they decided to occupy the Northeast region of China and were met with little resistance. Japan would continue to occupy Manchuria until the end of World War II in 1945.

More Information for the premiere of Dracula

The classic horror film "Dracula" starring Bela Lugosi as the title character premieres during February at the Roxy Theater in New York City. The film was directed by Tod Browning and was the first film to legally adapt Bram Stoker's Gothic vampire novel, with the film "Nosferatu" having done so in 1922 but without the rights to the story. The film also took many cues from the stage play with the same name that was created by Hamilton Deane and John Balderston in 1924. "Dracula" was a hit after its release and was praised by many critics who seemed to particularly appreciate Lugosi's performance. In 2000 the film was selected to be preserved by the Library of Congress.

The iconic pre-code horror film “Frankenstein,” starring Boris Karloff as the Monster, debuted during November . The film also starred Colin Clive as Dr. Frankenstein and Mae Clarke as Elizabeth, his fiance. The film was an adaptation of Peggy Webling’s 1927 play, which was also based on Mary Shelley’s 1818 novel of the same name. “Frankenstein” was praised by both critics and the public as a thrilling piece of entertainment. In 1991, the black and white movie was selected to be preserved by the Library of Congress due to its cultural significance.

Aerosol Can Norway by Erik Rotheim

Hawke's Bay earthquake of 1931, also known as the Napier earthquake destroys much of Napier in New Zealand and measures 7.8 on the Richter scale.

Yellow River flood (Huang He flood) is generally thought to be the deadliest natural disaster of historic times, and almost certainly of the twentieth century and kills between 900,000-2,000,000 people in China

Prices of consumer goods drop an estimated 17 percent from 1930

Following the Wall Street Crash 2500 banks in the US fail 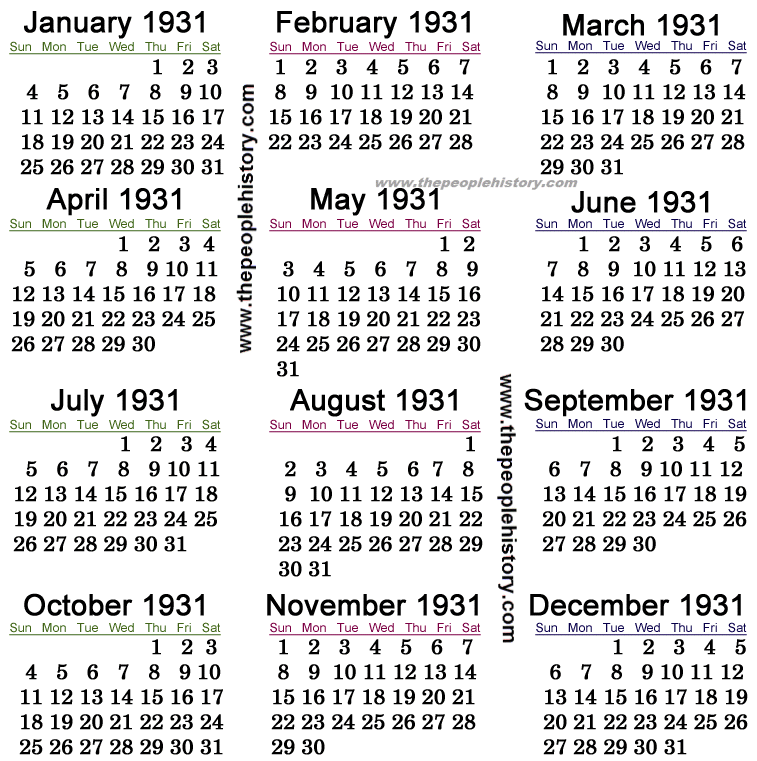