What Happened 85 years ago in 1937 Important News and Events, Key Technology and Popular Culture

1937 unemployment continued to drop to 14.3% dropping some 6.7% from the previous year. And the Engineering feat of the Golden Gate bridge opening gave Americans great pride, and the Millionaire Inventor / Industrialist set a new air record by completing the flight from Los Angeles to New York in 7 hours 28 seconds. After a number of strikes in the Auto industry General Motors were forced to recognize the UAW United Auto Workers Union. A major flood along the Mississippi and Ohio rivers caused millions to lose their homes in Ohio , Kentucky and Illinois. The pride of Germany the flying ship Hindenburg exploded while attempting to hook itself to a mooring post and signaled the end of the flying ship as a major form of transport, and the immortal words of reporter Herb Morrison who was filming the Hindenburg " Oh The Humanity! The Humanity " were shown and heard around the world. One of the unsolved mysteries of modern times the disappearance of Amelia Earhart also occurred in this year.

What Events Happened in 1937

1. Amelia Mary Earhart started her career during World War I as a nurses aid in Toronto, Canada looking after wounded soldiers ( Mostly as a Cook )

2. 1920 after saving by working multiple jobs including photographer, truck driver, and stenographer she saved the $1,000 needed to take flying lessons

4. 1928, Earhart became the first woman to fly solo across the North American continent and back

5. 1932 she became the the first woman to fly solo non-stop across the Atlantic

6. 1937 On June 1 Amelia Earhart and her flight navigator Fred Noonan take off from Miami attempting a round-the-world flight.

7. At midnight GMT on the July 2nd after travelling 22,000 miles they take off from Lae, New Guinea for the final 7,000 miles, 1st stop would be Howland Island in the Pacific.

8. The last recorded radio broadcast from Amelia Earhart was at 8:43 am stated "We are on the line 157 337" , she was never heard from again

After more than 70 years and using the latest technology her plane has still not been found and Myths and urban legends abound, but her legacy of the pioneer spirit she showed and the records she achieved are a tribute to her spirit of adventure.

2. The Hindenburg was 803.8 feet long with an envelope of (7,062,000 cubic feet) filled with Hydrogen gas which is highly flammable to provide the lift

4. 1936 The Hindenburg makes 17 round trips across the Atlantic Ocean 10 trips to the U.S. and seven to Brazil

5. On May 3 The Hindenburg leaves Frankfurt, Germany bound for Lakehurst, NJ, United States

6. At 7:21 PM on May 6th while attempting to dock with its mooring mast at the Lakehurst Naval Air Station the Hindenburg bursts into flames killing 35 passengers, crew and 1 ground crew, when watching the disaster ( Video below ) it is amazing any passengers and crew survived.

The incident together with other high profile problems in the Airship Industry shattered public confidence in passenger-carrying rigid airships and marked the end of the era for Airships.

A loaf of Bread 9 cents

A LB of Hamburger Meat 12 cents

Couple of examples of houses advertised for sale

Currency Exchange $5.00 to the Pound Sterling

Other Major Events From 1937

3. On May 30 Memorial Day, strike sympathizers start at Sam's Place and march towards the Republic Steel mill in protest against non signing of the collective bargaining agreement .

4. A line of Chicago policeman block their path

5. A tree branch is thrown by steel workers at the police lines

6. Police open fire on the crowd and use clubs to break up the protest, police bullets kill ten people and injure 30, another 28 suffer serious head injuries from police clubbing.

6. A Coroner's Jury declared the killings to be "justifiable homicide" and no police were ever convicted.

More Information and Timeline For Snow White and the Seven Dwarves

Walt Disney premieres "Snow White and the Seven Dwarves" on December 21st at the Carthay Circle Theater in Los Angeles, California. It was the very first technicolor, full-length animated English language feature film to have been created and captivated audiences from the start, as huge crowds gathered to see the spectacle at the premiere. The film initially had a budget of $1.5 million it was expected to be a failure, but Disney was proven correct in his gamble as the film went on to become a beloved classic and it made over $6 million by 1939.

The popular Looney Tunes character Daffy Duck appears for the first time during April in the animated short “Porky’s Duck Hunt.” The surly duck was voiced by Mel Blanc who also voiced Porky Pig and would go on to voice Bugs Bunny. The short was directed by noted animator Tex Avery and was produced by Leon Schlesinger of Warner Bros. The cartoon’s plot revolved around Porky Pig’s attempt to hunt Daffy only to be foiled by the duck’s goofy antics.

Aviator Howard Hughes breaks his own transcontinental flight speed record when he flies from Los Angeles to Newark.

On January 19, millionaire aviator Howard Hughes broke his own transcontinental flight record that he had set in the previous year. Hughes flew his monoplane a total of 2,490 miles from Los Angeles, California to Newark, New Jersey in 7 hours, 28 minutes, and 25 seconds. The record was nearly two hours shorter than his previous record. Hughes averaged a speed of 332 miles per hour. His flight was successful but it was believed that he had a few problems with his oxygen mask during the flight.

The Battle of Shanghai began during August and was one of the first and costliest battles of the Second Sino-Japanese War. The battle went on until November of that year and ended when the Imperial Japanese Army claimed victory over the Republic of China and captured the city of Shanghai. The Chinese troops greatly outnumbered Japan but suffered heavier casualties and did not have as many planes, tanks, or ships as the Japanese. The Second Sino-Japanese War would continue through World War II and ended in Japanese defeat.

British author J.R.R. Tolkien’s fantasy novel “The Hobbit” was published on September 21 News Events. The book quickly became popular and was nominated for the Carnegie Medal award for children’s literature. This was Tolkien’s first novel and is now considered a precursor to his wildly popular Lord of the Rings trilogy. The book was published by George Allen & Unwin in London. After its initial release the book received positive review and the first edition was sold out within a few months.

The first hospital blood bank system in the United States is established by Dr. Bernard Fantus during March . Fantus opened the blood bank in Chicago, Illinois at the Cook County Hospital. The blood bank stored and preserved donated blood, making many medical treatments easier as doctors no longer needed donors to be present at the time of transfusion. As a result of the blood bank, the number of transfusions more than doubled at the hospital in the following year. The idea of the blood bank revolutionized medicine and helped advance modern surgery.

The British Duke of Windsor and American Wallis Warfield Simpson are married in a small ceremony in France on June 3rd . The Duke of Windsor was formerly known as King Edward VIII of Great Britain but had abdicated in 1936 in order to marry American socialite Wallis Simpson. Simpson was already married when they started their relationship which was especially scandalous at the time. Simpson got divorced, for a second time in her life, in order to marry King Edward VIII but the royal family and the British government still thoroughly rejected the idea of her as Queen. After he renounced his throne and her divorce was finalized they promptly married and had remained together until the Duke of Windsor’s death in 1972.

Actor and future U.S. President Ronald Reagan makes his film debut in "Love Is on the Air."

Future U.S. President Ronald Reagan made his film debut during October with the release of the film "Love Is on the Air." Reagan played the lead role of "Andy McCaine" opposite June Travis. Reagan went on to appear in over fifty films throughout his acting career and continued to remain in the public spotlight when he was elected as the Governor of California in 1967. In 1980, he was elected President of the United States and served until 1988.

The "Waterman Aerobile" flying car has its first flight.

More Information for the Aerobile

Waldo Waterman's flying car the "Waterman Aerobile" has its first flight during February . The Aerobile was a tailless monoplane with high wings and tricycle landing gear. The design and creation of the Aerobile was the result of Waterman working on plane prototypes since the 1910s. The Aerobile's design was an improved version of his prototype from the early 1930's, known as the "Waterman Whatsit." The vehicle was intended to be an affordable and safe aircraft option and he was recognized by the Bureau of Air Commerce for his creation. With the success of the test flight the craft was proven safe, but, it generated little interest with the public and only a few Aerobiles were made.

San Francisco’s iconic Golden Gate Bridge officially opens during May . Construction on the bridge began in 1933 and cost about $35 million to complete. It was designed by several engineers and architects including Joseph Strauss, Irving Morrow, Charles Alton Ellis, and Leon Moisseff, in a collaborative effort. At the time of its completion, the Golden Gate Bridge was the longest suspension bridge in the world, a title which it held continuously until 1964.

The Hindenburg disaster triggered the fall in the Use of Airships for commercial passenger travel,

The Golden Gate Bridge in San Francisco, is opened.

The Teasmade By Goblin is sold for the first time

The BBC use their outside broadcast unit for the first time, to televise the coronation of King George VI.

The Dandy, the world's longest running comic, was first published

Death on the Nile is published by Agatha Christie

The Hobbit is published by J. R. R. Tolkien

Of Mice and Men is published by John Steinbeck

First total solar eclipse to exceed 7 minutes of totality in over 800 years; visible in the Pacific and Peru

Joe Louis nicknamed The Brown Bomber defeats American Jim Braddock on June 22nd to became World Heavyweight Champion and had 25 defenses from 37 to 49. He was a world champion for 11 years and 10 months

Japanese forces capture the city of Nanking in China and massacre of an estimated 200,000

Typhoon strikes the Island of Hong Kong with devastating results

King George VI becomes the British Monarch when he is crowned on May 12th at Westminster Abbey. 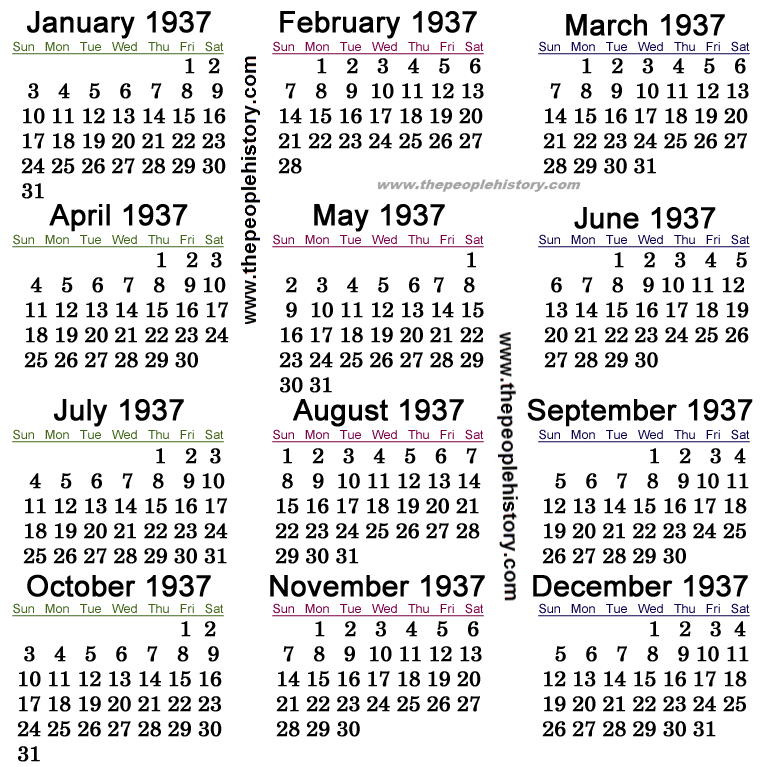