What Happened in 1967 Important News and Events, Key Technology and Popular Culture

1967 the continued presence of American troops increased further and a total of 475,000 were serving in Vietnam and the peace rallies were multiplying as the number of protesters against the war increased. The Boxer Muhammad Ali was stripped of his boxing world championship for refusing to be inducted into the US Army. In the middle east Israel also went to war with Syria, Egypt and Jordan in the six day war and when it was over Israel controlled and occupied a lot more territory than before the war. Once again in the summer cities throughout America exploded in rioting and looting the worst being in Detroit on July 23rd where 7000 national Guard were bought in to restore law and order on the streets. In England a new type of model became a fashion sensation by the name of Twiggy and mini skirts continued to get shorter and even more popular with a short lived fashion being paper clothing. Also during this year new Discotheques and singles bars appeared across cities around the world and the Beatles continued to reign supreme with the release of "Sgt. Peppers Lonely Heart Club Band" album, and this year was also coined the summer of love when young teenagers got friendly and smoked pot and grooved to the music of "The Grateful Dead. Jefferson Airplane and The Byrds". The movie industry moved with the times and produced movies that would appeal to this younger audience including "The Graduate" Bonnie and Clyde" and "Cool Hand Luke" . TV shows included "The Fugitive" and "The Monkees" and color television sets become popular as the price comes down and more programmes are made in color.

Ariel-3, the first all-British made satellite, was launched into an orbit around the Earth during May. The satellite was launched with the help of NASA from the Vandenberg Air Force Base in California and it carried five experiments from British universities. The experiments measured atmospheric noise, high altitude oxygen levels, low frequency radiation, medium frequency waves, and electron density and temperature. After its launch it orbited the Earth every 95 minutes and relayed data back to the United Kingdom until 1970 when it re-entered Earth’s atmosphere.

More Information and Timeline For Improved Safety In US Cars
1. 1965 Ralph Nader publishes his book "unsafe at any speed" detailing major safety design issues with American Cars
2. 1966 National Traffic and Motor Vehicle Safety Act is passed
3. 1966 U.S. established the United States Department of Transportation (DOT) with automobile safety one of its purposes
4. 1966 GM President James Roche forced to appear before a United States Senate subcommittee of the Department of Transportation (DOT)
5. 1967 The National Transportation Safety Board (NTSB) created
Due to the publication of Ralph Nader's book "unsafe at any speed" and a significant rise in the number of deaths caused by road traffic accidents the National Traffic and Motor Vehicle Safety Act gave the federal government rights to set and administer new safety standards for motor vehicles and road traffic safety, over the next few years these standards included head rests, energy-absorbing steering wheels, shatter-resistant windshields, and safety belts

The first successful human to human heart transplant takes place during December. Dr. Christiaan Barnard performed the operation on the 53-year-old patient Louis Washkansky. The operation took place at the Groote Schuur Hospital in Cape Town, South Africa. The transplant was successful and Washkansky’s body did not reject the organ, although he did die just 18 days later due to double pneumonia brought on by the immunosuppressive drugs that he had to take. After the success, Barnard continued to perform successful heart transplants with the survival times of patients increasing gradually as technology advanced.

The arguments in the Loving v. Virginia case were argued at the US Supreme Court during April. The case centered on Mildred Jeter and Richard Loving, an interracial couple from Virginia that got married in Washington D.C. in the late 1950s. When they went back to Virginia they were charged with breaking the state’s law which banned interracial marriage and were jailed. The Lovings sued the state of Virginia and argued that the ban violated the Fourteenth Amendment and was unconstitutional. In June, the Supreme Court ruled in a 6-3 decision that state bans on interracial marriage were unconstitutional and that they were solely based on racial discrimination. The decision made interracial marriage legal throughout the United States.

The SS Torrey Canyon supertanker ran aground off the South of England March 18th causing a large oil spill and ecological disaster. The tanker ran aground between the Land’s End and Scilly Isles and leaked over 100,000 tons of crude oil into the sea. The oil reached the coasts of the Channel Islands and France and the oil slick spanned about 270 square miles. The spill was the worst in history at that time and prompted tighter international regulations for ships.

More Information for Lunar Orbiter 3
NASA launches the Lunar Orbiter 3 spacecraft during February . The main purpose of the Lunar Orbiter 3 mission was to photograph the surface of the Moon in order to find and analyze potential safe landing sites for future missions in the Surveyor and Apollo programs. The cone-shaped craft also measured radiation and micro-meteoroid impact. The mission lasted for a total of 264 days and it ended in October after taking 149 medium resolution and 477 high resolution photographs.

More Information and Timeline for Gibraltar Referendum
The territory of Gibraltar holds a referendum on whether or not to stay with Great Britain or join Spain on September 10th, 1967. An overwhelming majority of the citizens of Gibraltar voted in favor of keeping British sovereignty with 99% in favor and a 95% voter turnout. The territory had been under British control since 1713 and was an important naval point for Britain since it borders where the Atlantic Ocean joins the Mediterranean Sea. By 1981, Gibraltar residents were granted British citizenship and the territory was soon able to self-govern.

More Information for Sgt. Pepper's Lonely Hearts Club Band
The popular rock band The Beatles release the experimental concept album "Sgt. Pepper's Lonely Hearts Club Band" during June . The band had just declared an end to their touring and as the freedom to record whatever they wanted set in, they set out to collaborate on their eighth album. They spent more time than they ever had before recording this album and focused on experimenting with sound and lyrics in a way that they had not been able to do while touring. Thought of by many as the definitive Beatles album it was considered one of their best at the time of its release and featured such songs as "With a Little Help from My Friends," "A Day in the Life," and "Lucy in the Sky with Diamonds."

1. Expo 67 was held in Montreal, Canada and began in April of 1967.
2. The International and Universal Exposition, also known as Expo 67, ends in October .
3. To create the 900 acre site, Montreal built new islands and added to existing islands on the St. Lawrence river, where they then built the 90 pavilions.
4. The expo had 62 participating nations and had over 50 million visitors, making it the most successful World’s Fair of the 20th century.
5. After it ended, it continued as an exhibition entitled “Man and his World” which lasted from 1968 to 1984.

The town of Winneconne in the state of Wisconsin declared its sovereignty in July . The town had been inadvertently left off of the state’s official highway map for the year. Town officials contacted the state to ask for the mistake to be corrected but were told they would have to wait until next year for an updated map. As a publicity stunt, the town’s officials came together to announce their secession from the state. Winneconne announced plans to set up tolls on their roads and to annex the nearby city of Oshkosh. The governor agreed to negotiate and the state agreed to put up road signs directing towards the town and have brochures at state tourism sites. The town agreed to the terms and rejoined the state after one day of sovereignty.
The little town still celebrates the event and we found their website helpful as they provide an interesting timeline of the events here

More Information for Rolling Stone Magazine.
The very first issue of Rolling Stone magazine was released in November . Created by Jann Wenner in San Francisco, the magazine was intended to reflect the youth's perspective on music, politics, and popular culture, while maintaining a more professional journalistic standard than many other similar publication of the time. The magazine became known for its iconic covers, with John Lennon gracing the first issue. Rolling Stone magazine has since remained popular in modern times, publishing over 1,000 issues.

Dr. James H. Bedford became the first person to be cryonically preserved after his death in January . Bedford, a 73 year old psychology professor who died of kidney cancer, asked to be preserved with the hope that he could be revived in the future. He was frozen within hours of his death by the Cryonics Society of California. Robert Prehoda, Dr. Dante Brunol, Robert Nelson, and Dr. Renault Able all took part in the process, during which Bedford’s body was injected with chemicals meant to help preserve him better in cold temperatures, stored in a “cryocapsule” and kept in a bath of liquid nitrogen at -196 C. He has remained at the Alcor Life Preservation Foundation since 1982 after being transferred to several different facilities. This is a particularly interesting topic and you can find more information here from the facility that currently takes care of Dr. Bedford. 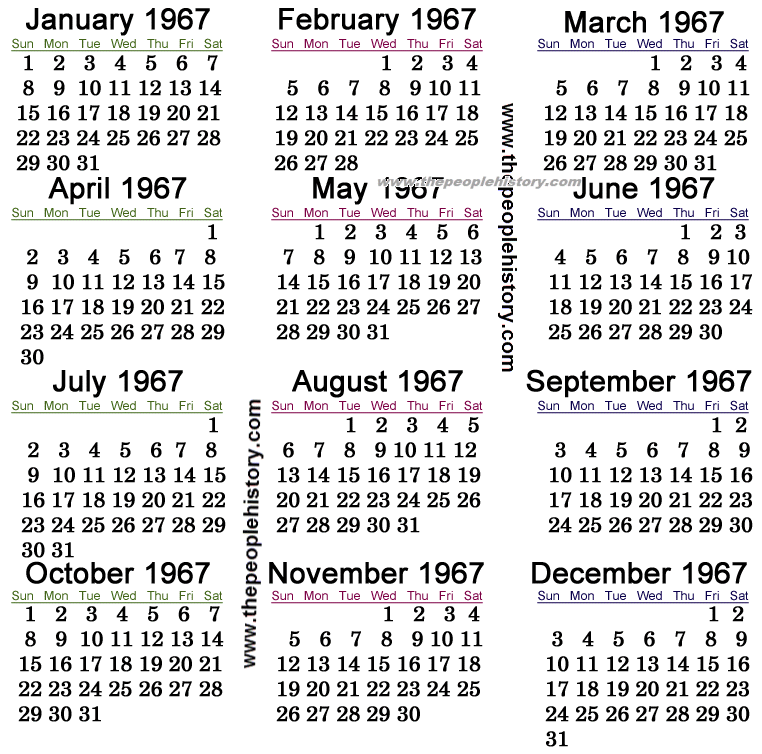 Part of our Collection of Toys From 1967

More News and Key Events From 1967