What Happened in 1952 Important News and Events, Key Technology and Popular Culture

1952 despite the war in Korea Americans considered themselves to be prospering with average worker earning $3,400 per year, a college teacher could expect to earn $5,100 per year . Three out of 5 families owned a car, 2 out of 3 families now had a telephone, 1 in 3 homes had a television. The average woman in America would be married by 20 years of age looking forward to raising a family but few continued with a career after children were born. Fast Food restaurants were growing in popularity, but the scourge of Polio hit many thousands of families ( 50,000 estimated ) . Many more cars in America were now fitted with automatic gearboxes and gas cost 25 cents per gallon. The worlds first passenger jet The Comet is produced in UK signaling the start of faster and cheaper air travel in later years.

1. The first Chevrolet Corvette prototype was completed during December.
2. The classic convertible sports car was created by famed designer Harley J. Earl, who had also created the auto industry’s first concept car during the 1930s (the Buick Y-Job).
3. The Corvette dream car was unveiled to the public in January of the following year.
4. The first model was driven off the assembly line on June 30, 1953.
5. At first, the vehicle was not very popular but it gained popularity in 1955 when it was given a V8 engine and again in 1961 when the body was completely re-designed.

1. The popular Mr. Potato Head toy is first sold during May .
2. The toy consisted of little plastic goofy faces and body pieces meant to be placed on real vegetables.
3. George Lerner, the creator of the toy, thought that his invention would help make vegetables more appetizing and fun for children.
4. Just prior to the release of Mr. Potato Head, it became the first toy to be advertised on television at the end of the previous month.
5. It was a success and over one million were sold within the first year.
Check Out Our History of Toys Section

Elizabeth II becomes the Queen of England and the United Kingdom after the death of her father King George VI on February 6th. Elizabeth II was just 27 years old and had been traveling in Kenya with her husband Prince Philip at the time. Her coronation was held in June of the following year to allow the proper amount of time for mourning and it was the first coronation of a British monarch to be broadcast on television. She has reigned for over 60 years and has since become the longest reigning legitimate British monarch. Although her role is largely ceremonial, Queen Elizabeth II has made an impact on British culture and politics since her ascension and She is considered one of the wealthiest and influential women on the planet.

The iconic musical film “Singin’ In The Rain” premieres at Radio City Music Hall in New York City on March 27th. The film starred Gene Kelly, Debbie Reynolds Donald O’Connor, and Jean Hagen. It was written by Betty Comden and Adolph Green and directed by Gene Kelly and Stanley Donan. The MGM-produced film went on to be nominated for Best Music and Best Actress at the Academy Awards and was only a moderate box office success. The plot focused on Hollywood’s transition from the silent film era to talkies during the 1920s as well as a classic love story. Since its release, it has been consistently ranked as one of the greatest American films ever made and it was selected for preservation by the Library of Congress in 1989.

The Treaty of San Francisco, also known as the Peace Treaty with Japan, becomes effective on April 28th. The treaty formally put an end to the state of war between the Allied powers and Japan at the end of World War II. It also brought an end to the Allied occupation of Japan and set terms for the relationship between the United States and Japan for the future. The Soviet Union and China objected to the terms of the treaty, but nearly all of the Allied nations signed it.

The English version of Anne Frank’s “The Diary of a Young Girl” was published in June. Anne Frank was a teenage Jewish girl who hid from the Nazis with her family and 4 others in an annex in Amsterdam. Frank’s diary documented her daily life from June of 1942 to August of 1944 just before the Gestapo was tipped off to the Annex. The Frank family was deported to concentration camps and Anne died at the Bergen-Belsen camp at the age of 15 just a few weeks before the camp was liberated in 1945. Anne’s father Otto was the only survivor in the family and he published her diary originally in Dutch during 1947. The English version was eventually released with an introduction written by Eleanor Roosevelt.

More Information for Chaplin's Re-Entry
Legendary film maker Charlie Chaplin is denied re-entry into the United States during September . Chaplin and his family had been traveling to London for the premiere of his movie "Limelight" when they were told they would not be allowed back into the country. Chaplin, along with many others in Hollywood, had faced harsh scrutiny from the House Un-American Activities Committee and Senator Joseph McCarthy during the height of the Cold War due to Chaplin's perceived leftist political beliefs. Chaplin vowed to never return to the United States, but eventually visited again in 1972.

More Information for the Finland Olympics
The Summer Olympics begin in Helsinki, Finland during July . A total of 69 counties participated in the games with the Soviet Union and Israel doing so for the first time. There were 149 total events with 4,955 athletes competing in them. The United States won the most medals with 76 and the Soviet Union won the second most with 71, the host nation came in eighth place on the medals table with a total of 22 medals. These games also marked the first time that equestrian competitions allowed women to compete with men in mixed events.

More Information and Timeline For London Smog
1. Following the end of World War II London increases in population density
2. Most home heating uses relatively low-grade, sulfurous variety coal for heating which increased the amount of sulphur dioxide in the smoke
3. The increased use of cars also leads to further pollutants in the air
4. Londoner's become used to thick fog / smog in and around the city called "Pea Soupers"
5. A cold spell leads to increased coal fire usage
6. Unusual windless conditions create large clouds above the city with heavy pollutant content
7 December 5th to December 9th . Unusual weather conditions over the city of London, England combined with the heavy use of coal fired heating formed a thick layer of smog ( chimney smoke combined with car exhaust fumes and sulphur dioxide ) making a deadly combination over the city of London
8. Visibility was reduced to a few yards and most Public transport did not operate
9. The ambulance service stopped functioning which led to a number of the deaths because the public found it difficult if not impossible to seek medical attention.
10. An estimated 4,000 to 12,000 die from respiratory tract infections in just 4 days
The large number of deaths caused by the worst environmental disaster in UK history leads to the The Clean Air Act of 1956 which required smokeless fuels must be used in heavily populated area's including cleaner coals, electricity, and gas, reducing the amount of smoke pollution and sulphur dioxide from household fires.

1. The United States tests the first hydrogen bomb during November at the Marshall Islands in the Pacific Ocean.
2. The thermonuclear bomb, codenamed Mike, was dropped on the island of Elugelab in Enewetak Atoll as a part of Operation Ivy.
3. The island was completely destroyed in the blast which was equivalent to the force of 10 million tons of T.N.T. and the wildlife and vegetation on the surrounding islands was also demolished.
4. The first hydrogen bomb was a two-stage fusion device designed by Edward Teller and Stanislaw Ulam.
5. It was about 1000 times more powerful than the original atomic bomb and its successful detonation accelerated the nuclear arms race during the Cold War.
6. In 1953, the Soviet Union would test their own version.

More Information for the British Nuclear Bomb
1. The United Kingdom tests its first atomic bomb during October becoming the world's third nuclear power.
2. The test took place at the Montebello Islands in Australia.
3. The British nuclear program began in 1947 in secret and was headed by many British scientists who had previously worked on the first atomic bomb with the United States as a part of the Los Alamos program.
4. By February , the British Prime Minister Winston Churchill announced the planned test to the public and the 25-kiloton bomb was successfully detonated in October.

More Information and Timeline For Polio in the 1950s
1. Polio / Poliomyelitis / Infantile Paralysis
2. Polio is an acute viral infectious disease spread from person to person
3. 1910 Polio Epidemics appear around the world in increasing numbers leaving thousands of children and adults paralyzed
4. The March of Dimes Foundation established by President Franklin Delano Roosevelt as the National Foundation for Infantile Paralysis (NFIP) on January 3, 1938, to combat Polio.
5. The March of Dimes Foundation funded much of the research which produced the two vaccines used to combat Polio
6. Two independent researchers both funded by March of Dimes Foundation came up with vaccines in the battle against Polio Jonas Salk vaccine in use from 1955 and Albert Bruce Sabin in use from 1963
7. In two years Polio numbers increase from 20,000 per year prior to 52 up to 58,000 in 1952 and 35,000 in 1953
8. By 1965, only 61 cases of paralytic polio were diagnosed in the United States
Polio is now rare in the Western world following the use of Polio vaccine to induce immunity blocking person-to-person transmission. But Polio was still endemic in South Asia and Nigeria up until the late 80's, in 1988 there were an estimated 350,000 cases. A global effort to eradicate polio began led by the World Health Organization, UNICEF, and The Rotary Foundation and Polio cases number less than 1,000 per year today.

More Information and Timeline For Mother Teresa
1. 1910 Mother Teresa born Agnes Gonxha Bojaxhiu in Uskub, Ottoman Empire
2. 1928 Join the Sisters of Loreto as a missionary
3. 1929 Taught at the St. Teresa's School in Darjeeling, India
4. 1944 Appointed headmistress of Loreto convent school in Entally, eastern Calcutta
5. 1948 Begins her missionary work with the poor and adopted Indian citizenship
6 1950 Receives Vatican permission to start the diocesan congregation that would become the Missionaries of Charity
7. 1952 Opens the first Home for the Dying in space made available by the city of Calcutta
She devoted the rest of her life to helping the poor in India including opening a home for victims of leprosy, many have criticized her methods of care and beliefs, but in this webmasters humble opinion at least she did something to help those in need which is the most one human being can do for another. Mother Teresa died on September 5th 1997 in Calcutta and following her death she was beatified by Pope John Paul II and given the title Blessed Teresa of Calcutta.

The "Today Show" debuts on NBC with host Dave Garroway.

More Information for the "Today Show"
NBC's "The Today Show" debuts during January . Hosted by Dave Garroway, the show featured national and world news, as well as interviews and lighter content in a two-hour live format. The concept of the show was envisioned by Sylvester Weaver Jr. who would later become the president of NBC from 1953 until 1955. Dave Garroway would host the show as the main anchor from its start in 1952 until he left in 1961. "The Today Show" was the very first of its kind and inspired the creation of other similarly modeled programs such as "Good Morning America" and "The Early Show." 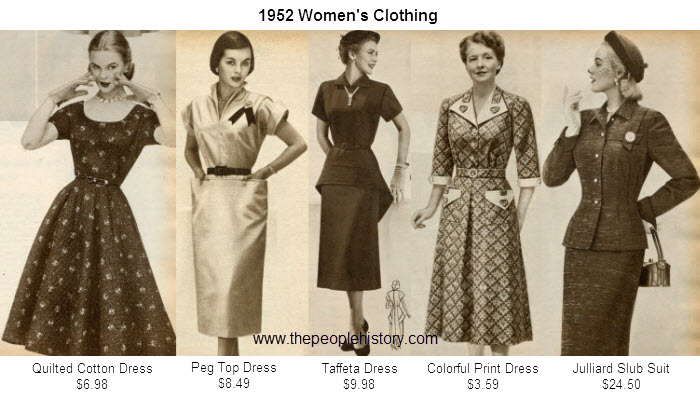 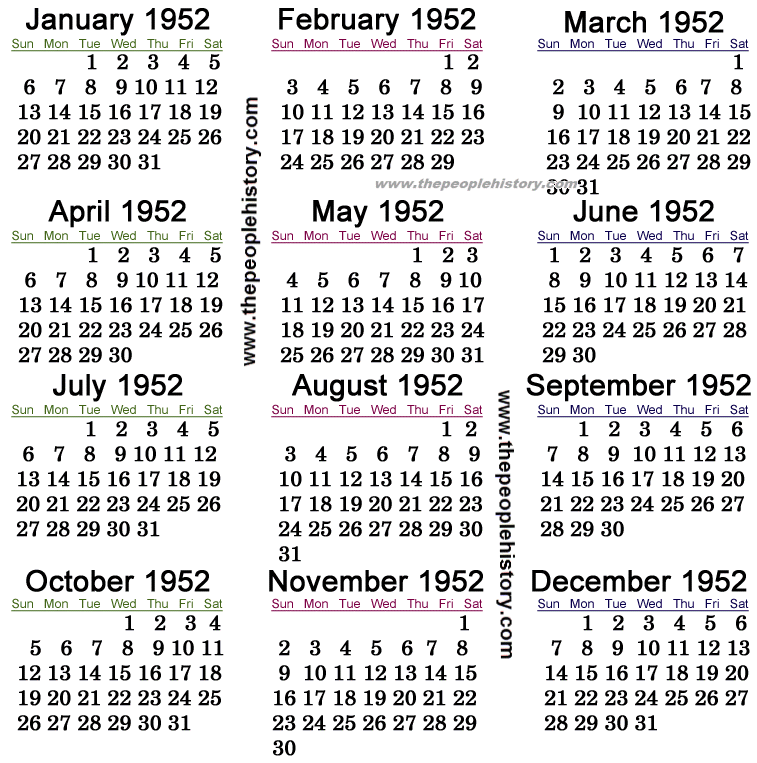 Part of our Collection of Toys

Check out our Television Programmes From The 50s whenever possible we have included a trailer to jog your memory. Series trailers and more information are found on the decade they started.