What Happened in 1970 Important News and Events, Key Technology and Popular Culture

1970 Music continues to make significant impact with the largest ever rock festival held on the Isle of Wight with 600,000 people attending, including some of the biggest name in music including Jimi Hendrix and The Who. This is also the year The Concord makes it's first its first supersonic flight. Another significant change is the age of voting is now lowered to 18 in the US.

The Nuclear Non-Proliferation Treaty goes into effect after ratification by 43 nations.

More Information for the completion of the Nuclear Non-Proliferation Treaty.

In March of 1970 the Nuclear Non-Proliferation Treaty went into effect after it was ratified in the United Nations. The purpose of the treaty was to prevent the further spread and creation of nuclear weapons, to work towards complete disarmament, and for nations to cooperate with each other in the safe development and use of nuclear energy. Nearly two hundred countries have joined the treaty over the years, including the five nuclear states, and in 1995 the treaty was extended indefinitely by the United Nations.

Paul McCartney announces that the Beatles have disbanded

More Information and Timeline for the Beatles

1. John Lennon forms a band that becomes The Quarrymen in March of 1957 in Liverpool, England. Paul McCartney joins the band in July.

4. The Beatles make Brian Epstein their manager in January of 1962.

5. They sign a recording contract with EMI's Parlophone records in June of 1962, George Martin is their producer.

6. Ringo Starr joins the band as their drummer in August of 1962 after Best is fired.

8. The Beatles first appear on the Ed Sullivan Show in February of 1964 and "I Want To Hold Your Hand" becomes a number one hit in the United States.

9. The group begins to change creatively with the release of Rubber Soul in 1965 and Revolver in 1966.

10. They release the Sgt. Pepper album in June of 1967 and one month later their manager Epstein dies of an overdose.

11. The band goes to India in 1968 and when they come back to the United Kingdom they record the White Album.

12. They hold their final public performance in January of 1969 on the rooftop of Apple Records in London. Abbey Road is released later that year.

13. The Beatles officially break up in April of 1970 when Paul McCartney publicly states that he is leaving the band. Let It Be is released as their final album a month later.

1. The Apollo 13 mission launches as the third mission to the moon, carrying astronauts James Lovell, John Swigert and Fred Haise. The mission launched at 2:13 pm on April 11, 1970.

2. About three hours after the launch, the mission is set on its trajectory to the moon. There is a command module called the Odyssey and a lunar module called Aquarius.

3, On April 13th at about 10:07 pm the second oxygen tank explodes. This causes issues with the other oxygen tanks. The crew contacts CapCom shortly after the incident with the famous line "Houston, we've had a problem."

4. After about three hours, all of the oxygen stores are gone and there was a loss of water, electricity and the propulsion system.

5. Houston and the crew begin to work on a plan for safe re-entry to Earth that includes closing off the command module and re-configuring the lunar module.

6. The crew rations supplies and power in order to safely return to Earth. With careful calculations they are about to change the course of their trajectory and re-position the spacecraft towards Earth on April 14th.

7. On April 17th, the crew of Apollo 13 has a successful splashdown in the Pacific Ocean near Samoa, with all of the crew surviving.

Cost of a gallon of Gas 36 cents

More Information for the completion of the first Boeing 747 Flight.

The world's first jumbo-jet, the Boeing 747, has its first commercial flight on January 22nd of 1970. The plane was operated by Pan-Am and the flight traveled from New York to London carrying 332 passengers and 18 crew members. The Boeing 747 revolutionized air travel and the commercial airline business as the jumbo jets could now carry up to 550 people during one flight. These planes reduced the amount of flights needed to transport the same amount of people on smaller planes, helping to control an ever growing volume of air traffic.

The Luna 17 Mission is launched by the USSR, carrying the first successful remote-controlled robotic lunar rover, Lunokhod 1, to the moon.

More Information and Timeline for Luna 17 and Lunokhod.

The Soviet Union launches the Luna 17 mission on November 10, 1970. The Luna 17 spacecraft carried a controllable robotic rover named Lunokhod 1 which would become the first successful remote-controlled robotic rover to land and operate on the Moon. It arrived and was deployed on November 17, 1970. The rover operated for about 322 Earth days (11 Lunar days) and while it was in operation it took high resolution panoramas of the lunar surface, transmitted tens of thousands of television images, and conducted several hundreds of different test on the soil. The Lunokhod 1 rover was estimated to have traveled about ten kilometers in total over the surface and was originally expected to operate for just three months in Earth time (3 Lunar days).

The Aswan High Dam is completed during July of 1970. Located across the Nile river in Egypt, the dam cost about one billion dollars and took eleven years of construction to build. The dam measured at nearly 350 feet tall, over 12,500 feet long, and produced massive amounts of hydroelectric power, up to ten billion kilowatt hours every year. While being incredibly beneficial economically to the Egyptian economy, the creation of the dam also produced some negative consequences such as the displacement of thousands of people and a decline in the fertility of agricultural lands near the river.

More Information and Timeline for the US Invasion of Cambodia

1. In February of 1969 President Nixon and his National Security Adviser, Henry Kissinger, discuss plans for bombing the North Vietnamese supply routes that went through Cambodia.

2. In March of 1969, Nixon launches the secretive campaign called "Operation Menu" in which American B-52s carpet bombed the Eastern side of Cambodia.

3. The bombing campaign lasted for over a year and took a great toll on the country as many civilian lives were lost.

4. In April of 1970, Nixon orders a secret invasion of Cambodia by US and South Vietnamese troops.

5. News of the invasion reaches the US and further fuels anti-war sentiments. People stage massive protests against the United States' involvement in Cambodia.

6. Several students are shot and killed by the National Guard at anti-war protests at Kent State University and Jackson State University. Soon after, Nixon withdraws forces from Cambodia.

7. The United States chooses to continue the bombing of the country, which lasts until 1973.

The USSR launches the Venera 7 spacecraft.

The Soviet Union launched the Venera 7 spacecraft during August of 1970. The Venera 7 spacecraft's mission was to land on the planet of Venus and gather data from the surface. The probe successfully approached Venus during December of that year. As it made its descent towards the surface, Venera 7 transmitted data while traveling through Venus atmosphere and for about one second when it landed on the surface. It was revealed through later analysis that the probe had actually been able to transmit data back to Earth through an extremely weak signal for about 23 minutes after landing. The Venera 7 mission became the first spacecraft to successfully land on another planet and return data directly back to Earth.

More Information and Timeline for the Chicago Seven

1. In 1967, the Democratic Party choose to hold the 1968 National Convention in Chicago, Illinois.

2. In 1968, Anti-war groups ask the city for permits to protest near the Democratic National Convention in Chicago. The city denies nearly all requests except one for a rally in Grant Park with an 11pm curfew.

3. About 15,000 protesters attend the rally and attempt to march towards the convention but are confronted by police. Clashes between police and demonstrators last several days and over 500 people are arrested.

4. A grand jury indicts eight people for inciting a riot in March of 1969. The case of Bobby Seale is dropped and the defendants become known as the Chicago Seven. The group consists of Abbie Hoffman, Jerry Rubin, David Dellinger, Tom Hayden, Rennie Davis, John Froines and Lee Weiner.

5. The trial begins on September 24 News Events, 1969. Over the course of the trial the United States National Guard is called in to control crowds of demonstrators that gathered around in support of the defendants.

6. The trial was highly publicized and drew a lot of media attention due to the famous names that came to testify such as Norman Mailer, Allen Ginsberg, Reverend Jesse Jackson, and Timothy Leary.

7. In February of 1970, all of the defendants are acquitted of conspiracy and five of them are convicted of inciting a riot. They were sentenced to five years in prison each and given $5,000 in fines each.

8. In November of 1972, all of the convictions were overturned by an Appeals Court on the grounds of judicial bias and bias in jury selection.

Janis Joplin dies in a cheap motel from a heroin overdose

The first New York marathon is run in New York

Simon and Garfunkel release their final album together, Bridge Over Troubled Water. The Title Track won the Grammy for song of the year.

On Her Majesty's Secret Service

More News Stories From This 1970

The Liberian registered tanker Pacific Glory spills up to 100,000 gallons of crude oil on October 25th into the English Channel creating a huge oil slick and an environmental disaster

South Australia suffers it's worst number of fires killing at least 75 people and had injured another 800.

100,000 people demonstrate in Washington DC against the Vietnam War

The US Population reaches 205 million

The US has 85 people per sq mile

Reverend Ian Paisley has won a seat in parliament

US lowers the voting age to 18

California becomes the first US State to adopt "No Fault" Divorce law.

Brazil wins their third world cup with Pele as the captain

After many years of court battles damages awarded to Thalidomide victims 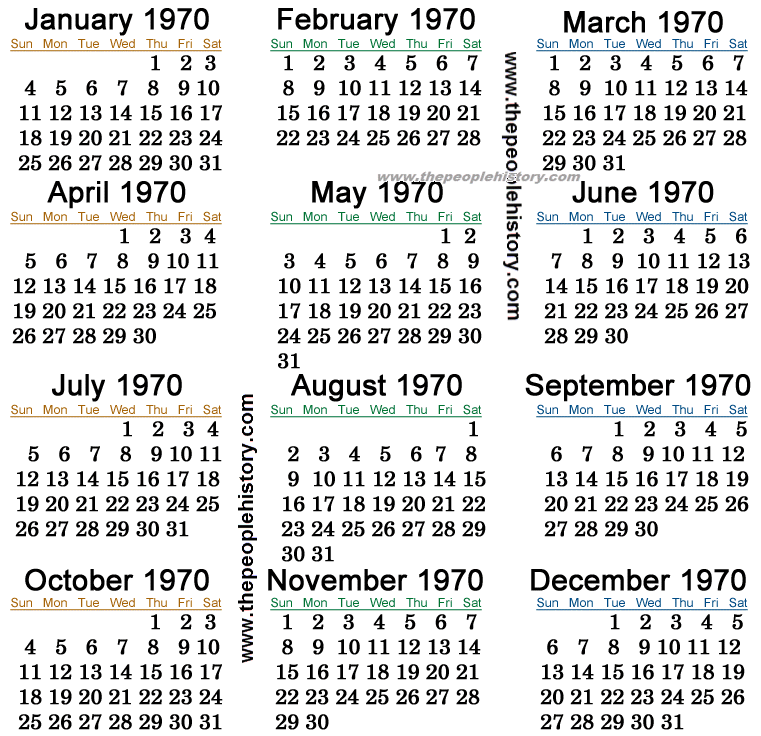 China -- Chairman of the People's Republic of China -- Song Qingling --