May 8 significant News Events, History from 8th May

1945 : President Truman and Prime minister Churchill declared victory in Europe today, celebrating the defeat of Nazi Germany. Following the announcement huge crowds, many dressed in red, white and blue, gathered outside Buckingham Palace in London and were cheered as the King, Queen and two Princesses came out onto the balcony.

1970 : Just shortly after the Break Up of the Beatles is announced The Beatles Final original album "Let It Be" is released by Apple Records.

1978 : David Berkowitz ( Son of Sam ) admitted guilty to 6 son of Sam killings in court, he has also claimed responsibility for 2000 fires in a 4 year period under the alias of "The Phantom of the Bronx," it was revealed a diary found detailed 1,411 of the fires during this time period.

1942 : The Battle of Coral Sea, between the Japanese Navy and the United States and Australian Navies ends with the loss of the carrier USS Lexington and the Japanese carrier Shōhō.

1927 : The Mississippi floods are continuing the path of destruction. The Mississippi has seen many floods in previous years and thankfully most residents heeded the flood warnings saving many lives but this flood will be the most costly in many years.

Known For : Harry S. Truman was FDR’s vice president and became the 34th US president after his death in 1945. He was elected for his own term in 1948 and left office in 1953. Truman became the first person to authorize the use of nuclear weapons when two atomic bombs were dropped on Japan near the end of World War II. Before he joined the executive branch, he served as an elected judge and a US Senator from Missouri.

1929 : Three gangsters from Chicago were found murdered today and riddled with bullets in retaliation for the "St Valentines Day Massacre" earlier in the year, so far 2 have been identified as 2 of Scarface Al Capone's henchmen.

1939 : Calls for peace continue with Europe on the brink of war including Pope Pius XII who asks the nations involved to try to come to a peaceful settlement , Currently Britain is worried as if the Soviets and Nazis do make a pact to join forces, war could be that much closer and will involve all the countries in Europe.

1941 : Anita O’Day recorded "Let Me Off Uptown" with Gene Krupa and his band. O'Day was one of the more prominent jazz singers of her day and has often been compared to greats like Billie Holiday, Sarah Vaughn and Ella Fitzgerald.

1927 : The Bi-Plane the "Transatlantic White Bird" Piloted by the french Aviator Captain Nungesser attempting to be the first to cross the Atlantic non stop from Paris to New York is spotted in the early morning off Nova Scotia fighting strong head winds and heading for the Maine Seaboard and had been in the Air for approximately 33 hours. Shortly after the sighting they mysteriously disappeared while trying to be the first to complete the non-stop transatlantic flight, flying from Paris to New York City . The plane, pilot and navigator have never been seen since and two weeks later American aviator Charles Lindbergh, flying solo, successfully crossed from New York to Paris.

1948 : Following the end of the World War more problems are appearing in how Germany will be split with the Russians stating the plan put forward by Britain, France and the United States will cause Germany and the rest Europe to be divided and is not in accordance with the Potsdam Agreement. So far no word has been given by Russia on what they will do. What did happen is that Berlin was split and the Berlin Wall was built as part of the cold war over the next 40 years.

1959 : A 200 ton pleasure boat carrying some of Egypt's top agriculture engineers and their families on a picnic sank with loss of 200 lives on the Nile.

1967 : Following the publication of his book "unsafe at any speed" published in 1965 which highlights the Chevrolet Corvair as an unsafe and unreliable example of automobiles offered to American Consumers. Ralph Nader is part of a symposium on "Automobile Crash Injuries" at the Upstate Medical Center as part of the pressure on the government and the automobile industry to improve safety in cars.

Known For : Melissa Gilbert began her career as a child actress appearing in several commercials during the late 1960s. She was cast as Laura Ingalls Wilder in NBC's Little House on the Prairie from 1974 to 1984. She made other notable appearances in television movies like The Miracle Worker. As an adult she continued her acting career and worked regularly, including as a voice actress in Batman: The Animated Series. She served as the Screen Actors Guild president from 2001 to 2005. In 2016 she ran for Congress in Michigan's 8th congressional district but ultimately dropped out of the race.

From our 1926 Ladies Hats Page 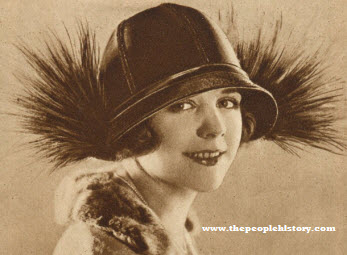 
You'll be proud of your appearance in this hat, copied from one of the newest Fifth Avenue models. It is made of fine quality Faille, with smart narrow brim in front and wide brim turned flat against the crown in back. Milan hemp braid on the sectional crown and upper brim are the newest fashion, and a flare of burnt goose feathers at each side gives it graceful, rich style. Full rayon lined.

1986 : Following the Chernobyl Nuclear Power Plants meltdown on April 26th the Atomic Energy Agency has announced the fire is now out in number 4 reactor and the job of encasing the reactor in concrete will start.

1968 : The Kray twins, Reginald and Ronnie and their 41-year-old brother Charlie are arrested following a series of dawn raids in London. The next day they are charged and March 1969 they were jailed for life for the murders of George Cornell and Jack 'The Hat' McVitie, members of the London underworld.

1973 : After more than two months when 120 armed members of the American Indian Movement and their supporters who had seized the old town of Wounded Knee on the Pine Ridge Reservation in South Dakota lay down their arms and surrendered the town to wary Federal officials.

1984 : The USSR has announces it is boycotting the Olympic Games blaming the commercialization of the games and lack of security. Most of the Eastern Bloc countries follow suit with the exception of Romania and 14 countries joined the boycott.

1988 Murder Via Cyanide in Excedrin Capsules

1988 : Stella Nickell who put cyanide in Excedrin capsules including her husbands and five additional bottles of Excedrin she placed on store shelves in the Seattle area is convicted of the murder of her husband and Susan Snow who had taken one of these capsules and died instantly by a Seattle, Washington, jury.

Known For : David Attenborough went to Clare College, Cambridge for a degree in Natural Sciences, after which he did two years National Service in the Royal Navy. He subsequently applied to the B.B.C. and after an initial rejection he was brought in to work as a broadcaster. With the growth of the B.B.C. television service he was put in charge of non-fiction programmes. Between 1965 and 1969 he was the controller of BBC2. He has always been in favor if natural science and historical shows, and his presentation of natural history series has included Life on Earth, The Living Planet, The Trials of Life, The Private Life of Plants, The Life of Birds, the Life of Mammals and Life in the Undergrowth. He was knighted in 1985.

2005 : Celebrations take place in Europe and across the globe as nations honored the 60th anniversary of V-E day, the day that World War II ended.

2006 : The Iranian President Ahmadinejad sent a lengthy letter to United States President Bush, the first time such a move had been made in twenty-seven years. According to US Secretary of State Condoleeza Rice, the letter covered such topics as history and philosophy, but did not make any comment or diplomatic address to the nuclear concerns and conflicts the two nations had been facing.

2008 : The Olympic torch reached the summit of Mount Everest after being carried up the mountain by the team Chinese climbers. The team of climbers consisted of both men and women, and Tibetans and Han-Chinese. The feat of carrying the torch up the tallest peak was hoped to draw attention away from protests against the Beijing Olympics.

2010 : The Eurozone leaders approved a 145 billion dollar loan to aid Greece to prevent worsening of its financial situation. The aid was given on the condition that Greece cut its public spending to receive the three year loan. The move was made as a preventive measure, with the leaders hoping the loan would prevent Greece from becoming bankrupt. The move was also made amid fears that the collapse of Greece could result in a similar fate for other European Union countries.

2011 : The first Australian Aboriginal boxer to win a world title died at the age of sixty-two Lionel Rose beat a Japanese boxer in 1968 to win the bantamweight title was the first Aboriginal Australian to be named Australian of the Year. Rose had ended his boxing career by winning forty-two out of fifty-three fights. In 2007, Rose had suffered a stroke that left him with multiple health problems and he had been ill for a few months prior to his death.

2012 : American author of famed children's book "Where the While Things Are" Maurice Sendak died at the age of eighty-three after having complications due to a stroke. The author and illustrator had written numerous books and won many awards including the Caldecott Medal and the Hans Christian Andersen medal for illustration.

2013 : Jeanne Cooper, who played the character of Katherine Chancellor on the US soap opera "The Young and the Restless" died in her sleep at the age of eighty-four.

From our 1926 Fashions Page


The latest word from gay, swagger New York is this jaunty coat of all wool colossal plaid tweed. Its remarkable blending of tones and overtones, soft and colorful, make it pleasing and easy to the eye. Cut on swagger box lines, the coat exploits the snappy 1926 stand up collar, forming part of the new revers which roll smartly to the single button closing. When opened, the revers reveal a sportive half facing of solid tone color suede velour; and when standing, the collar displays a snappy little facing to match. More tone color deepens the cuffs and pipes the swagger pockets. Full length striped satinette lining.