What Happened in 1973 Important News and Events, Key Technology and Popular Culture

1973 Inflation has a significant impact on peoples lives around the world with the UK inflation rate running at 8.4% and the US running at 6.16% . This causes problems in every aspect of peoples lives from the price of Gas, Food and Bills , which in turn causes higher wages and the spiral continues, much of this is caused by the Arab members of the (OPEC) restricting the flow of oil to countries supporting Israel as part of the Yom Kippur War. And the start of a Recession in Europe causing increased unemployment and a 3 day week in the UK. Meanwhile in the US two important cases dominate the news with Roe v. Wade making abortion a US constitutional right on the 22nd January and the start of the Watergate hearings in the US Senate, and due to price increase of gas the Japanese car manufacturers with smaller engines and more efficient have an impact of the US car industry

The United States ends its involvement in the Vietnam War after the signing of the Paris Peace Accords during January. The agreement was signed between North Vietnam, South Vietnam, Viet Cong, and the United States. The formal name of the agreement was “An Agreement Ending the War and Restoring Peace in Vietnam” and it detailed an all-around ceasefire in Vietnam and the withdrawal of all US forces and removal of US bases to be completed within 60 days. It also mandated that North Vietnam release all prisoners of war and outlined the details and terms for an eventual peaceful reunification of Vietnam.

Arab members of the Organization of Petroleum Exporting Countries (OPEC), announce they will restrict flow of crude oil to countries supporting Israel on October 17 causing price of oil to increase by 200%

Secretariat becomes the first horse since Citation in 1948 to win the Triple Crown in United States horse racing after placing first in the Belmont Stakes on June 9 News Events, 1973. In what was considered one of the best horse races in history, Secretariat set a dirt-track record for the one and a half mile race with a time of 2 minutes and 24 seconds. He was ridden by Ron Turcotte during the race and he won the race by an astounding 31 lengths. He was trained by Lucien Laurin and his owner was Penny Tweedy.

The classic film “American Graffiti” premieres in the United States during August. The film was directed by George Lucas, who also co-wrote it with Gloria Katz and Willard Huyck. The coming-of-age comedy starred Richard Dreyfuss, Ron Howard, Cindy Williams, and Candy Clark. The film was praised by critics and earned five Academy Award nominations, four Golden Globe nominations, and two Golden Globe wins. “American Graffiti” was notable for its unique and innovative storytelling style, along with its nostalgic take on Sixties teen culture in California. In 1995, it was deemed an important cultural film and selected for preservation by the United States Library of Congress.

Cost of a gallon of Gas 40 cents

More Information for the Occupation of Wounded Knee

About 200 Oglala Lakota Native Americans and members of the American Indian Movement (AIM) began their occupation of Wounded Knee in South Dakota during February of 1973. AIM, a militant civil rights organization, was created in the late 1960s with the intention of bringing attention to injustices faced by Native Americans. Wounded Knee was located on the Pine Ridge Indian Reservation and in 1890 it was the site of a massacre of 300 unarmed Sioux by the U.S. Cavalry. At the start of their occupation AIM took 11 hostages and asked that The U.S. Government start investigating broken treaties, the Bureau of Indian Affairs, and all of the South Dakota Sioux reservations. The occupation lasted 71 days during which they negotiated with U.S. Marshals and exchanged regular gunfire with federal agents. In May the group surrendered and government officials agreed to start investigations as demanded.

Spiro Agnew, the Vice President of the United States under Richard Nixon, resigned during October of 1973. Agnew had been dealing with charges of tax evasion and receiving bribes prior to his resignation. After he left office he pleaded no contest to the criminal charges and was fined and given probation. He was replaced by Gerald Ford, who, less than a year later, would become the President after Nixon resigned. Spiro Agnew was the second US Vice President to resign, the first for criminal reasons.

The Sears Tower is completed during May. The 108 floor 1,729 foot tall structure became the tallest building in the world, a title that it held for 25 years until the Petronas Towers in Malaysia were completed in 1998. Located in Chicago, Illinois, the building originally housed the Sears, Roebuck & Co. headquarters. It was designed by architect Bruce Graham and engineer Fazlur Khan, who had previously worked together creating another iconic Chicago skyscraper, the John Hancock Center.

1. Billie Jean King and Bobby Riggs competed in “The Battle of the Sexes” exhibition tennis match during September of 1973.

2. 29-year-old King, who had already won 10 Grand Slam titles and was a pioneer in women’s tennis, went up against 55-year-old Riggs, who was at one point considered the best tennis player in the world, and defeated him handily winning three sets 6-4, 6-3, and 6-3.

3. King expressed relief at the end of the match, stating that she was worried losing it would have set women back.

5. Over 30,000 spectators attended it in Houston and an estimated 90 million people viewed the televised match worldwide, making it the most viewed tennis match in history.

More Information for the Mariner 10 Spacecraft.

The Mariner 10 spacecraft launched at the beginning of November in 1973. It had the mission of becoming the first probe to study the planet of Mercury. The Mariner 10 probe also became the first spacecraft to visit two planets during a single mission, as it passed Venus on its way to Mercury. The craft sent over 12,000 images of the two planets back to Earth. The mission was considered successful and ended in March of 1975 as it began its orbit around the Sun that it continues in to this day. The total cost of the spacecraft was about $100 million which would be equivalent to nearly $500 million today.

More News and Key Events From 1973

Chrysler and other US car makers close a number of plants affecting 100,000 workers

US Troops withdrawn from Vietnam

US Troops withdrawn from Vietnam and U.S. involvement in Vietnam War ends with the signing of peace

Watergate Hearings begin in the United States Senate and President Richard Nixon tells the nation , “I am not a crook.”

The Bosporus Bridge is completed joining Europe and Asia in Istanbul

TUC brings 1.5 Million on Strike in UK as Day Of Protest at pay restraint policy

In the UK, as a result of high coal and oil prices, the Three-Day Week officially comes into force.

Dark Side Of The Moon Reminded by Pink Floyd Fan

Pink Floyd " Dark Side Of The Moon "

Paul McCartney and Wings with " My Love "

Are You Being Served? (UK)

The Price Is Right

The wide ranging Endangered Species Act of 1973 is signed into law to "protect species and the ecosystems upon which they depend."

The Mississippi River reaches its peak level in St. Louis during a record 77-day flood.

The Sears Tower opens in Chicago 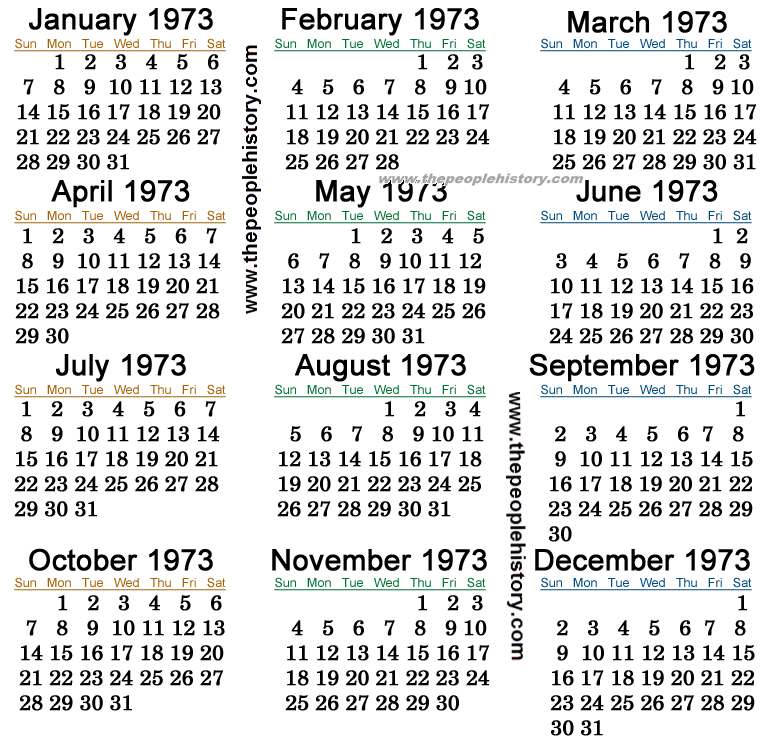 China Chairman of the People's Republic of China Dong Biwu