Important Events From This day in History January 4th

1974 - Watergate
1974 : Richard Nixon received a subpoena which required him to show tapes which would lead to evidence regarding 1972 burglary of the Democratic National Headquarters located in the Watergate complex.
As a result, Sam J. Irving, Jr. D.N.C. planned to take Richard Nixon to court. Over 500 tapes as well as several hundred written documents were sought as evidence regarding this case.

1923 - Rosewood Massacre By KKK
A surprise attack by members of the Ku Klux Klan on a black residential area of Rosewood, Fla left 8 people dead. Over the next few days, white mobs attacked and killed African Americans, and burned most of the buildings in the town including the local black church in Rosewood. The all-black town of Rosewood, a north Florida community of 120 people, was burned to the ground 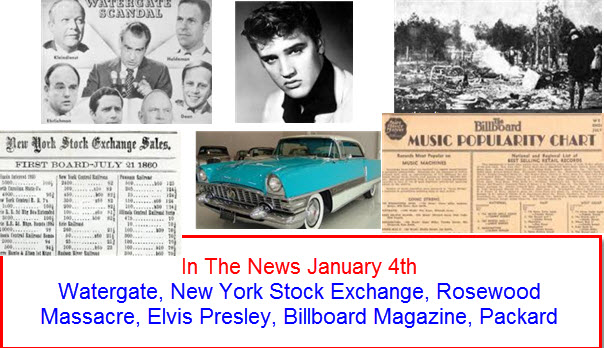 1948 - Burma Gains Independence
Burma became an independent nation no longer under control of the British. Independence to Burma was originally granted by Japan in 1943 after Japan had temporary control over it.
However, this land area was primarily turned into a Japanese military base at this time. Since then, this country has undergone quite a few changes-one of which is a name change in 1989. As of this date Burma was referred to as the Union of Myanmar.

1948 - Wailing Wall
1948 : The Arabs and Jews battled for control of the Wailing Wall. This is considered to be one of the holiest shrines in the entire city.
One news report indicates that Jews started this battle with the tossing of grenades. For two weeks prior to this date, Arab riflemen had seized this wall.
Incidentally, 1948 is the year that Israel became a nation, which is something that was predicted for a long time. The struggle for control of Israel continues to take place between opposing ethnic and religious groups.

1948 - Pakistan Train Crash
A train collision had occurred in Sangi, Pakistan. The Zakara, a train which typically traveled between Multan and Karachi, took an overnight trip on January 4th was suddenly sent down an alternative track.
On this different track, a 67-car freight train was parked, unseen by the operators of the Zakara. The Zakara had crashed right into this parked freight. It was reported that an estimated 200 to 300 people were killed as a result.

1954 - Elvis Presley Records First Demo Record
Elvis Presley recorded a 10 minute demo at Sun Records Memphis Recording Service in Nashville. He had recorded an acetate recording of the same songs as a gift for his mother in 1953. The Sun Records boss Sam Phillips arranged for Elvis Presley to an audition on June 26th, 1954. In July Elvis records his first commercial recording Sun Records in Memphis, Tenn "That's All Right (Mama)." and the rest as they say is history.

1955 - U.S A. Hydrogen Bomb
The U.S. had conducted hydrogen bomb experiments in the Pacific for about a year prior to this date. On this day 1955) the U.S. paid out $2,000,000 towards the loss of life and property which occurred on March 1st, 1954.
In 1954, one fisherman had been killed and several other individuals were sickened. Furthermore, the fish located among local Japanese fishing operations were contaminated.

1955 - Packard Cars
New versions of Packard Company automobiles were being manufactured as of this date. The Packard Caribbean was one of the most noted automobiles produced by this company on this day.
It was this company's first V-8 engine vehicle, and it competed against cars such as the new Corvettes and Thunderbirds being made at this time.

1955 - Jackie Gleason
1955 : Television celebrity Jackie Gleason signed a $5,000,000 contract with the CBS television station. He starred in television comedies such as the one entitled by his name (The Jackie Gleason Show), as well as The Honeymooners. He also played in a movie called Smokey and the Bandit II and hosted the variety show Cavalcade of Stars.

1966 - Ronald Reagan
Ronald Reagan announced his candidacy for the position of Republican Governor of California. Before he decided to run for political office, he was an actor who starred in Death Valley Days. He later became U.S. President.

1967 - Dulwich
1967: Eight art masterpieces that were stolen from the Dulwich College Gallery in London on December 31st have been recovered after five were found today wrapped in newspaper in a park. The paintings, worth $8.2 million, were all intact

1967 - Donald Campbell Dies
Donald Campbell is killed on Coniston Water in the Lake District while attempting to break his his own water speed record in his jet-powered boat, the Bluebird K7

1981 - "Yorkshire Ripper"
Truck driver Peter Sutcliffe admitted to being the "Yorkshire Ripper," the killer of 13 women in northern England over five years. On 2 January 1981 he was stopped by the police with prostitute Olivia Reivers and was arrested, on grounds of having fitted his car with false number plates.

1985 - Surrogate Mother
1985 : Scotland Yard are investigating reports that a surrogate mother in London is to receive £6,500 for her baby from a childless couple. Surrogate is legal in the UK, but surrogate mothers cannot be paid. 1985

1990 - Pakistan Train Collision
Two trains collide in Sangi, Pakistan, killing between 200 and 300 people and injuring an estimated 700 others and was the worst rail accident in Pakistan.

1990 - Lincoln Town Car
It has been 38 years since the last time a luxury car won a "Car of the Year" award. This year the Lincoln Town car had made history on this very day when it received this very award by Motor Trend Magazine.

1998 - 1998 Ice Storm
North American ice storm of 1998 begins in Canada with steady freezing rain falling over an area of several thousand square miles of Eastern Ontario, including Ottawa and southern Quebec, northern New York, and northern New England (including parts of Vermont, New Hampshire and Maine). The Ice Storm continued till 10th causing major disruption of power estimated millions were without power ( Thousands of power lines and Pylons broke ) and travel ( Due to Bridges Closed ) In many areas a state of emergency was declared .

2006 - Bombing Attack On Shia funeral
2006 : A suicide bomb attack at a Shia funeral in Northern Baghdad kills at least 32 people and injured dozens of others. During the last 7 days the number and intesity of car bombings and suicide attacks has increased with the death toll reaching more than 200.

2007 - U.S A. Car Sales Figures
2007 has been a bad year for car sales due to the housing market problems and the over all credit squeeze. But to make matters worse Toyota continues to gain ground with new car sales overtaking Ford in the US and GM car sales declining decreasing the gap between Toyota and GM for the number 1 US car sales slot. Predictions for 2008 are gloomy as many forecast even more problems in the housing market and predictions of the lowest new car sales in the US in ten years back to the levels of 1998.

2010 - Iran is blocking its people from contact with Western organizations
Iran has banned any contact with over sixty influential Western organizations. These have been accused of conspiring against the Islamic Republic, and include the B.B.C., Voice of America and other media organizations that send Farsi-language programs into Iran, as well as think-tanks, academic institutions and leading non-governmental organizations. “Having any relation ... with those groups involved in the soft war is illegal and prohibited,” the Iranian intelligence ministry has said. “Citizens should be alert to the traps of our enemies and co-operate ... in neutralizing the plots of foreigners and conspirators.” Analysts have said that this is “a very harsh and important step” that will cut a lot of the back-channels for communication with the West.

2011 - 1968 Plane Hijacker Sentenced
Luis Armando Pena Soltren, a man from Cuba, was sentenced to fifteen years in jail for hijacking a plane going to Puerto Rico from New York in 1968, forcing the pilots to fly to Havana, Cuba instead. His two accomplices had been sentenced in the 1970s, but Pena Soltren remained in Cuba until he visited family in the United States in 2009.

2012 - Michele Bachmann Quits Republican Presidential Bid
2012 : Michele Bachmann, a congresswoman from Minnesota, announced that she was quitting her run for the Republican presidential nomination after receiving less votes than other candidates at the Iowa caucuses. Bachmann finished in Iowa with only five percent of the vote, coming in sixth place.

2012 - Men Banned From Selling Female Underwear in Saudi Arabia
After vigorous campaigning, King Abdullah has royally decreed that men will no longer be allowed to sell female underwear in lingerie shops. The country had previously only allowed men to work as shop keepers, but after women complained that male lingerie shop keeps made them uncomfortable, a new law was brought in, banning male lingerie shop workers and allowing women to take their place.

2013 - Gun Attack in Philippine Town
2013 : A gunman opened fire in the Philippine town of Kawit, killing seven and injuring another six people. The attack appeared to be random and was carried out by a local man who was shot and killed by the police.

2014 - Russia Allows Some Olympic Protests
Russia has announced that authorities will set up a zone where protests could be held at the Winter Olympics in Sochi. They announced that protests would be allowed to take place if approved by authorities and that the ban would still be in place in the games areas.

Celebrating Birthday's Today Dyan Cannon
Born: 4th January 1937 Tacoma, Washington, U.S.
Known For : Dyan Cannon is best known as American actress who has been in the industry for more than fourty years, she has been nominated for 3 Academy Awards but never won. Her most well known roles are Alice in Bob & Carol & Ted & Alice, Julia Farnsworth in Heaven Can Wait and as Jennifer 'Whipper' Cone in the Ally McBeal TV series. What many may not know is she was married for a short while to Cary Grant in the sixties.