1945 : Japan formally surrenders to the Allies, bringing an end to World War II. This is the day VJ day is celebrated or Victory in Japan day.

1923 : Following the Kanto Earthquake, fires continue to burn in the City of Tokyo, these fires caused a greater number of deaths than the Earthquake and became known as the Great Tokyo Fire.

1925 : Government Ministers from Canada and the United States have been having meetings to stop the illegal import of alcohol across the US -- Canadian border by working together.

1935 : A Category 5 hurricane strikes Florida Keys on with winds in excess of 185 mph causing extreme damage in the upper region of Florida Keys including the deaths of over 400 including hundreds of World War I vets who were watching a Labor Day baseball game. It is still considered one of the strongest hurricanes to have struck the United States, and is one of the strongest hurricanes ever recorded worldwide.

1937 : A major Typhoon has hit the Island of Hong Kong with devastating results including over 500 deaths and the city is still badly flooded , the death toll is expected to increase much more as the floods subside. A large Italian Cruise Liner was picked up during the typhoon like a stick and tossed on shore. 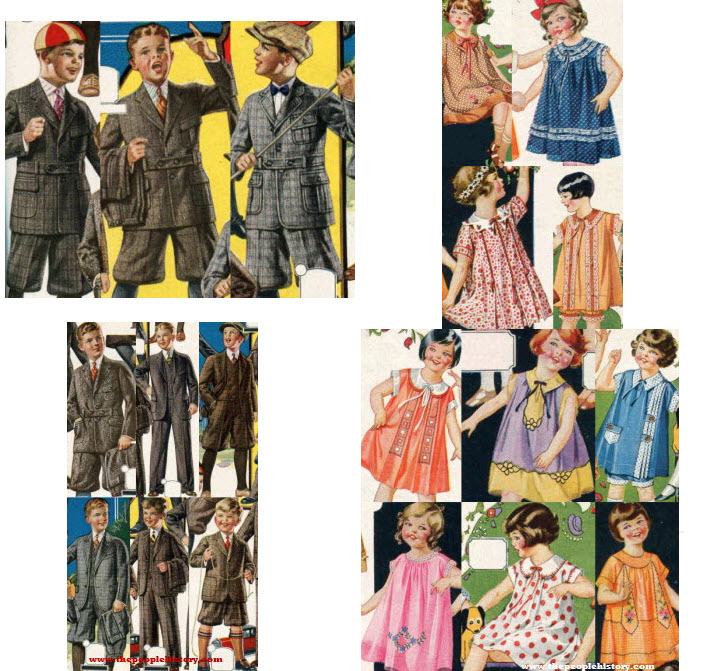 
These boys suits from 1925 offer a few different styles from a more modern adult style jacket with long pants to a child-like belted coat with knickers. The suits feature all wool fabrics with a variety of patterns and colors.


These frilly little girl dresses from the year 1925 are all of a similar shape but represent a different assortment of details. Some have embroidery while others feature cute neck ties and contrasting details like pockets. Some show off a floral pattern and another displays polka dots.

1954 : President Eisenhower has signed into law the new social security bill providing much wider cover and includes 10 million additional Americans with additional benefits, the cost will be financed by additional payments into the social security fund by both employers and employees.

1965 : Following the crack down on foreign workers by the department of Labor, protests from Massachusetts apple growers have forced the labor department to allow an additional 400 Canadian Apple pickers after complaining they can pick 4 to 5 times the amount that American pickers can in the same time and without them the harvest would fall to the ground and rot.

1969 : The original Star Trek airs its final episode after running for only three years and never placed better than No. 52 in the ratings. But did become a cult classic spawning movies and other series based on the series.

1969 : The first ATM to be installed in America starts dispensing cash at Chemical Bank in New York City.

1972 : Three fire bombs thrown into a Montreal Night Club have left 42 dead and many others injured with severe burns, and local hospitals are treating many with breathing problems caused by smoke inhalation.

1979 : Police discover the body of a young woman believed to be the 12th victim of the "Yorkshire Ripper" near the center of Bradford. The Yorkshire Ripper "Peter Sutcliffe" is eventually arrested in January 1981 and later sentenced to life imprisonment.

1983 : Following the shooting down of a Korean Passenger Airliner earlier this week President Reagan has declared the Soviet Union should be punished for it's barbaric act but has been careful in his choice of words and sanctions due to the ongoing Arms Reduction Talks between the US and the Soviet Union.

1984 : During a shoot out between rival gangs (Bandidos and the Comancheros) outside a bar in Sydney, Australia in what is called the "Milperra Massacre" 6 gang members are killed and a young innocent girl selling raffle tickets is caught in the crossfire and murdered.

1998 : The United Nations court finds the former mayor of a small town in Rwanda, guilty of nine counts of genocide.

2003 : Harley-Davidson is celebrating it's motorcycle's 100 birthday this week when thousands of Harley owners gather in Milwaukee where the first Harley-Davidson was made 100 years ago for a week of celebrations.

2005 : Four days after Hurricane Katrina struck New Orleans National Guards arrive with food, water and medicine, this was and still is considered a failure by US government departments who it is thought misjudged the situation. Katrina Timeline

2007 : Pope Benedict hosted a festival in Loreto, Italy on this day. The “Save Creation Day” festival focused on eco-friendly activities as around 300,000 Roman Catholics gathered. The pope encouraged preserving nature and living an eco-friendly lifestyle.

2008 : Paleontologists in France found a well preserved skull of a steppe mammoth. They say the rare find could reveal more about the evolution of that particular species.

2011 : The Federal Housing Finance Agency announced it would take legal action against 17 major banks it believed contributed to the financial collapse through losses in sub-prime mortgages. Some of the banks it plans on suing include Goldman Sachs, Bank of America, and HSBC.

2011 : The chemical leak occurred when containers carrying bromine were broken as carriages were moved around in the main railway station of Chelyabinsk. At least 42 people sought medical attention at the local hospital after experiencing respiratory problems caused by the leak.

2011 : Apple wins in court in Dusseldorf that bans the sale of the Samsung Galaxy Tab in Germany.

September 2nd, 2012 : Songwriter Hal David died in Los Angeles after suffering a stroke at the age of ninety-one. David was known for being a long time collaborator with Burt Bacharach and had also written a number of hit songs for performer Dionne Warwick.

2013 Swimmer Goes From Cuba to the US

2013 : Sixty-four year old swimmer Diana Nyad became the first person to swim from Cuba to the United States without a shark cage. Nyad had made four other attempts at the 110 mile swim but had failed previously.

Born This Day In History September 2

Known For : Jimmy Connors a former World No. 1 professional tennis player who graced the world stage from early 70's right through to the mid 1990s winning eight Grand Slam men's singles titles including the Australian Open 74, Wimbledon 74, 82, US Open 74, 76, 78, 82, 83. During his career he had many memorable matches against other stars of the day including Ken Rosewall, Björn Borg, John McEnroe, and Ivan Lendl.

Known For : Keanu Reeves is a Lebanese born actor who spent much of his childhood in Toronto, Canada. He began his movie career in 1985 and has had a number of starring roles including Ted Logan in Bill & Ted's Excellent Adventure, Neo in The Matrix some of his other movies include Chain Reaction, Constantine and Point Break. 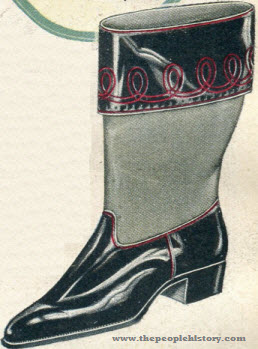 
If you were to walk down Fifth Avenue today you'd find the most fashionable women of the most fashionable city wearing the beautiful new Russian boot. It's the "last word" in footwear style, and the model we have selected is an unusually charming one. Note the graceful lines and see how striking is the contrast between the patent leather and gray suede. All the stitching is in red, and that, of course, adds to the "chic" appearance of this boot.