Fashions and Accessories From the 1920s including prices Men's, ladies and childrens fashions

Two of the most iconic fashions of the 1920's are the cloche hat and the flapper dress. The cloche hat of the 1920s evolved from the wider-brimmed hats of the decade before, and continued to evolve up until the 1930s and beyond. The basic description of the cloche hat is that it is a very snug-fit hat that was often worn tilted, covering the forehead, yet allowing room for vision. The hair was often cut short and styled flat to fit under these types of hats. Cloche type hats often covered the ears as well, and even sometimes the ends of women's short haircuts of the time. Often the flapper style clothing and the cloche hat were worn together, especially during the latter half of the Decade. These Accessories are featured From the Years 1923 and 1926 Below are a couple of examples from our 1920s Ladies Hats Page 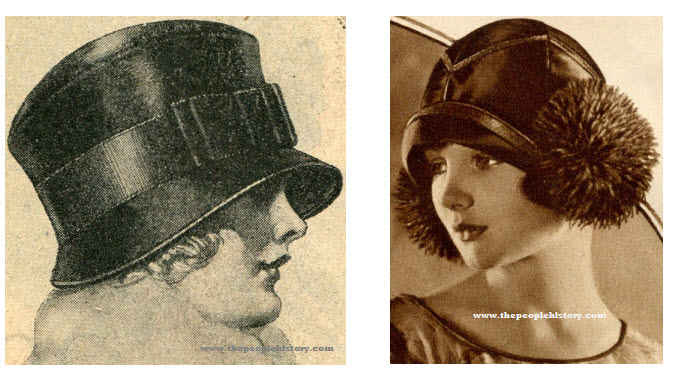 Flapper style was more than just a dress

The flapper style was more than just a dress, it embodied an entire lifestyle of the decade. The specific flapper type of dress was cut in a straight and loose style and throughout the decade the length of the flapper dress varied a little. In the early 1920s the length of dresses and skirts were about calf length, with some a little longer and some a bit shorter. From around the years 1926 to 1928, the hem lines of dresses were the shortest (approximately knee-length), and this is what most people remember when they talk of the flapper dress. During part of this decade the waist line of dresses dropped to the hip to promote more of a "boyish" look. However, by the early 1930s the waist line of dresses rose back up to its normal position. These Flapper Era Dresses are featured From the Years 1924, 1925 1926 and 1929 Find More on our 1920s Ladies Dresses Page 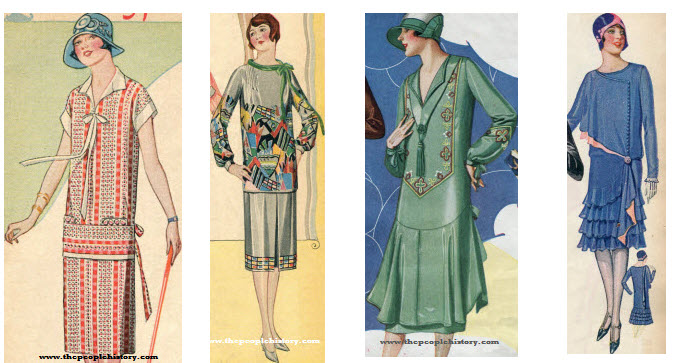 Beyond the Cloche and Flapper

Clothing styles consisted of more than just the cloche and flapper. In fact, this is the era during which more casual clothing was introduced to the public. For example, women began to wear pants more often and there were certain styles of women's shoes that were unique to this decade as well. Some of the breakout shoe styles included the ankle strap button shoe, the t-bar shoe, and shoes trimmed with sequins or other materials. The men of the era began to abandon formal wear as well when more and more men left full suits with long suit jackets for special events and began wearing shorter suit jackets for more casual occasions. These Roaring Twenties Examples are featured From the Years 1922 and 1927, 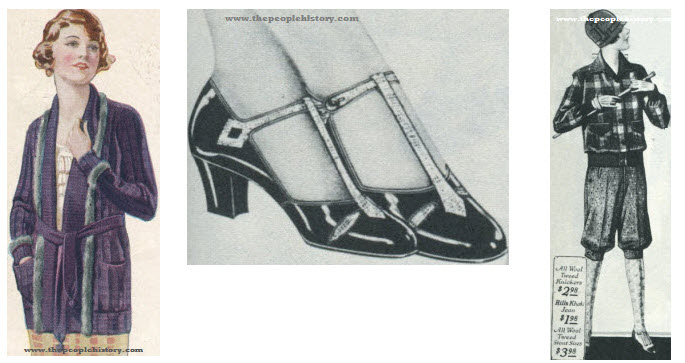 Men's suit lapels where not very wide during the 1920s, which was a trend that was started during World War I (1914 to 1918). This is also the era in which men began to wear cuffed trousers. Flannel also became increasingly popular, and so did two-toned white and tan or white and black shoes for casual wear. Some of the casual shoes that were worn by men were made with fringed tongues, and/or winged tips. The black patented leather shoes were still worn for more formal dress. However, the lace-up styled shoe was becoming more and more popular for men. Additionally, both men and boys often wore short knee pants (knickers) along with sweaters (i.e. Fair Isle slipovers) or casual shirts. Moreover, the shoes that boys wore usually were made of canvas. These Twenties Examples are featured From the Years 1925 and 1929

One other change that was significant of the 1920s is the fact that baby clothing were designed to be more practical. More comfortable outfits such as rompers and short dresses replaced the frilly laced dresses and other formal baby attire. For older girls, dress was different as well. They usually were seen wearing items such as cotton frocks, cardigan sweaters, and canvas shoes or sandals. In Addition to our Fashion Clothes and Accessories for Ladies and Gentlemen we have created a new page that shows Childrens Clothing during the decade the two examples below are from the Childrens Clothes Page 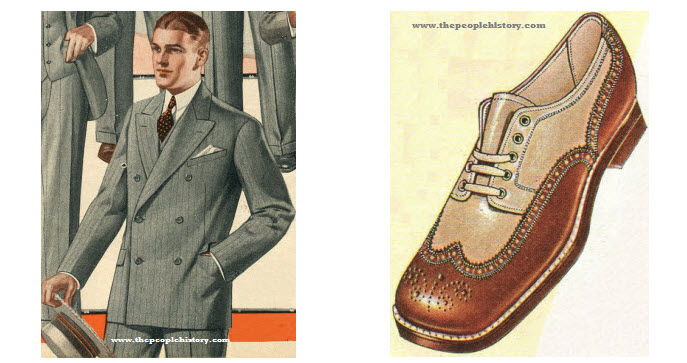 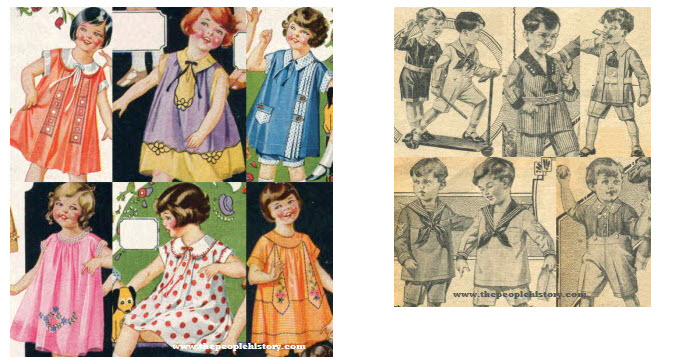