What Happened in 1925 Important News and Events, Key Technology and Popular Culture

The first motel opens in San Luis Obispo, California on December 12 . It was originally called the Milestone Mo-Tel and was located about halfway between San Francisco and Los Angeles in California. It charged a rate of $1.25 per night. The term motel was created as a way to shorten the phrase Motorists' Hotel and was used to describe an accommodation that would allow visitors to park their vehicles directly outside their room or chalet. The opening of the first motel as an early indicator of the car culture that would take over the American way of life. It also showed the huge potential growth market that could revolve around driving and cars.

F. Scott Fitzgerald's iconic novel "The Great Gatsby" was published in April . The novel featured themes of class struggle, excess wealth, and the breakdown of the American dream during the Jazz Age in the 1920's. Initially, after it was first published, the reviews were largely positive but sales of the book were disappointing to Fitzgerald who had hoped the novel would prove that he was one of the greatest American authors at the time. The novel did eventually gain widespread recognition during World War II when it was distributed to soldiers for entertainment. It has grown in popularity since then as it has become a standard text in American schools.

The Mount Rushmore National Monument site was dedicated during October.

On October 1st, the site of what was to become the Mount Rushmore National Monument was dedicated. The idea for Mount Rushmore came from historian Doane Robinson who originally proposed that important Sioux figures be carved into the Black Hills "Needles." In 1924, Robinson teamed up with sculptor Gutzon Borglum who suggested that the figures be changed to presidents George Washington and Abraham Lincoln. In March Borglum was granted permission to carve a monument and he chose Mount Rushmore as the site. It was also decided that presidents Thomas Jefferson and Theodore Roosevelt are added to the sculpture. Carving of the mountain began in October of 1927 and finished in October of 1941.

The Scopes Monkey Trial comes to an end.

1. The Butler Act which prohibits evolution from being taught in public schools is passed in Tennessee on March 21st, 1925

2. In Dayton, Tennessee, substitute teacher John Scopes agrees to be a defendant for the ACLU in a test case against the Butler Act.

3. John Scopes is charged with violating the Butler Act on May 5 News Events, and is put on trial for teaching from a chapter of a text book about evolution.

4. Famous attorneys argue the case, attracting much radio attention and opening up debate on the subject. William Jennings Bryan represents the prosecution while Clarence Darrow represents the defense.

5. The purpose of the trial changes as famous names with other agendas get involved. The ACLU originally intended the case to be about the unconstitutionality of restricting a teacher's academic freedom, it became a case about the validity of the Theory of Evolution over Biblical beliefs.

7. Scopes' lawyers appeal the verdict to the Supreme Court of Tennessee in 1927 on the grounds of unconstitutionality. The state supreme court rules that the Butler Act is constitutional.

8. Tennessee repeals the Butler Act in 1967. One year before the US Supreme Court rules that a ban like that is unconstitutional in the 1968 Epperson v. Arkansas case.

The Chrysler Corporation was founded by Walter Percy Chrysler in June . The iconic American car company was born out of the Maxwell Motor Company after former Buick engineer and manager Walter Percy Chrysler joined the company to help revitalize the brand. He soon took control of the company and re-branded it under his own name. The first car marketed by Chrysler was the Chrysler Six, originally priced at $1,565. Chrysler changed the car business by adding what some considered primarily luxury features to the standard models of the vehicles he created, distinguishing Chrysler's vehicles as a step above some of the other, more basic, manufacturers of the time.

1. Richard Sears issues the first catalog for his watches and jewelry in 1889.

2. Alvah C. Roebuck joins Sears in business and the first Sears, Roebuck and Co. Catalog is issued in 1893.

3. In 1906, Sears opens a catalog producing plant and the Sears Merchandise Building Tower in Chicago, Illinois as the company expands.

4. The first Sears retail store is opened on February 2nd, in Chicago, Illinois as a part of the Merchandise Building.

6. Sears continues to expand its retail store business, moving from big cities to suburbs in the 1950's and then to malls. It was the largest retailer in the US until the 1980s, with a large share of the US population getting everything from clothes to appliances at a Sears store or through a catalog.

More Information and Timeline for the Nellie Tayloe Ross

1. Nellie Ross was the wife of previous governor of Wyoming William Ross who had died during October of 1924.

2. The Democratic party decided to nominate Nellie Ross to run in the special election held after William Ross's death.

4. Nellie Tayloe Ross takes office as governor of the state of Wyoming on January 5th , becoming the first female governor in the United States.

6. She was later appointed vice chairman of the Democratic National Committee in the late 1920s.

7. In 1933, she became the Director of the U.S. Mint when appointed by President Roosevelt.

8. She was the also the first woman to hold such a prominent position in the U.S. Federal government and remained director until 1953.

On February 22nd Calvin Coolidge becomes the first President of the United States to have his inauguration broadcast on radio.

More and more Airlines are formed around the world for Freight mail and passenger traffic.

Richard G. Drew working at 3M invents Scotch Tape, his original invention was designed for use in the Auto industry to bring a new level of precision to automobile paint jobs. But the Adhesive Tape designed to be self sticking (Other adhesive tapes used water or heat to become sticky) took off with consumers and became an instant success.

The first issue of the New Yorker magazine is published.

The first issue of "The New Yorker" magazine is published on February 21st . Harold W. Ross was the creator and original editor of the magazine and he remained the editor until his death in 1951. The magazine was originally created as a means to showcase the social culture and events of New York City but as it expanded it became more well known for its short stories, essays, and poetry, among other literary and artistic features. It soon became popular worldwide and featured many prominent and up-and-coming writers like John Updike, J.D. Salinger, Dorothy Parker, and Woody Allen. "The New Yorker" is still a popular magazine that features important writers and is most well known for its intellectual cartoons.

The Grand Ole Opry began broadcasting during November . Originally broadcast from WSM radio in Nashville, Tennessee, it was then known as the "WSM Barn Dance" and was created by George Hay. The program showcased various types of up-and-coming musical acts with a variety of styles. Most acts were country singers but the program also featured folk, bluegrass, fiddlers, gospel, and comedic acts. The first performer to be featured on the show was "Uncle Jimmy Thompson." The Grand Ole Opry went on to become the longest running radio broadcast in the U.S. And is credited with aiding the careers of such notable musicians as Patsy Cline, Ernest Tubb, and Hank Williams.

The U.S.S Shenandoah airship crashed on September 4th . Built in 1923 by the United States Navy, the U.S.S. Shenandoah was the first of four rigid airships to be built in the United States. It also had the distinction of being the first airship to be filled with helium instead of the usual hydrogen. The U.S.S. Shenandoah was destroyed during its fifty-seventh flight while it was over a field in Ohio. It had encountered some bad weather that caused the airship to be torn apart while carrying forty-three people. Fourteen of the passengers lives were lost as a result of the crash. The crash of the U.S.S. Shenandoah was one of many airship incidents that prompted an increase in the safety standards airships.

Germany --- France and Belgium end occupation of the Ruhr

France and Belgium end their occupation of the Ruhr, an industrial region of Germany, in accordance with the Dawes Plan.

More Information for the Occupation of the Ruhr.

1. Following World War I, Germany was ordered to pay large amounts of reparations to the Allied countries to pay back war debts. They were soon unable to afford the high payments and Allied countries demanded they be compensated in some way.

2. French and Belgian troops began occupying some cities in Germany during 1921. By 1923 they occupied the entire industrial region of the Ruhr as a response to Germany's inability to fully meet the terms of the reparations that were demanded after World War I.

3. France and Belgium intended to have their reparations paid in goods like coal if Germany could not afford to pay in currency or gold but they were met with "passive resistance" by the region's workers and civilians

4. Workers in the Ruhr region resisted the occupation with protests, strikes, and general non-cooperation, interrupting the economic activities of the region.

5. The government-supported resistance combined with a period of of hyperinflation led to the complete destabilization and collapse of the German economy.

6. The issues created by the economic collapse forced France and Belgium to agree on a lowered reparation payment plan known as the Dawes Plan in August of 1924. The plan also stated that France and Belgium end their occupation of the Ruhr within the following year.

7. France and Belgium's occupation of the Ruhr region in Germany came to an end in August . 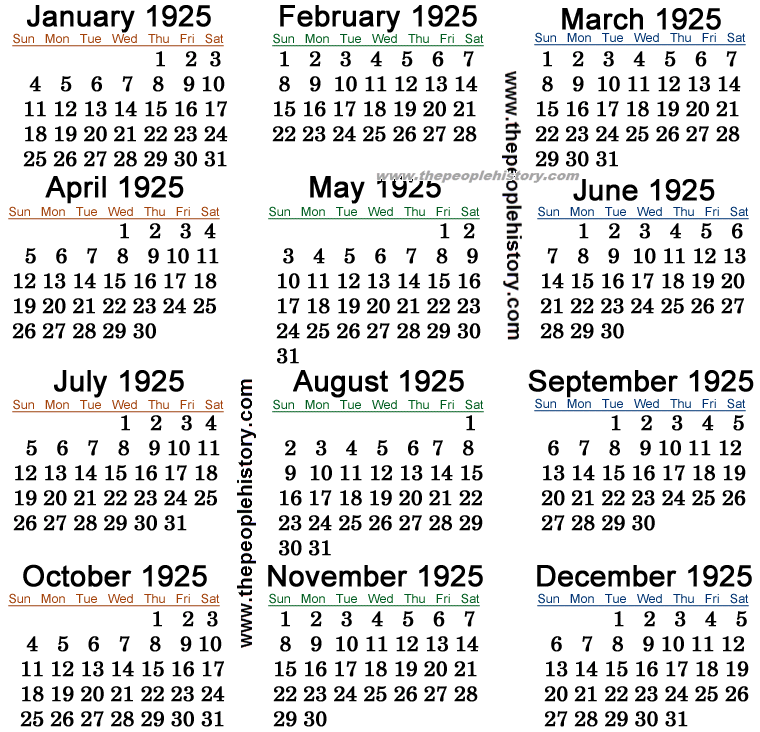 
A major epidemic of Diphtheria breaks out on - - February 2nd in Alaska.


On January 3rd Benito Mussolini declares he is taking over Italy and turning it into a dictatorship ending free elections.