1955 : Over 500,000 people in the UK have now received the Salk polio vaccine and since the death of Birmingham City full back Jeff Hall from Polio last month, there has been a sharp rise in the demand for the vaccine but local health departments have run out and now ordered an extra million doses. We take it for granted that our children and grandchildren are safe from Polio, but this is only because governments, scientists and the people worked together that Polio is now no longer the threat it was.

1945 : A Japanese balloon bomb explodes at Mitchell Recreation Area on Gearhart Mountain in Oregon, killing the pregnant wife of a minister and five children. This is the only recorded instants of deaths caused by Japanese Bombs on the American mainland in World War II.

1921 : Chanel introduced "Chanel Number 5" to some of her friends. Initially, it was given to preferred clients for free at her boutique. The fitting rooms in her boutique were also scented with No. 5. Coco Chanel commissions renowned perfumer Ernest Beaux to create the most expensive perfume in the world, Jasmine was the most expensive perfume oil and Chanel No. 5 relies heavily on Jasmine.

Born This Day In History 5th May

Known For : English singer-songwriter, With sales of over 120 million records, Adele is one of the world's best-selling music artists, Studio albums

1924 : 38 pirates who have been seizing ships for the cargo in Hong Kong waters have been captured and shot by Chinese authorities, this is part of the ongoing crack down on pirates operating in Chinese waters.

1925 : John Thomas Scopes a teacher from Dayton, Tennessee is arrested for violating Tennessee's Butler Act, which prohibited the teaching of evolution in Tennessee schools. He was charged on May 25 and the case ended with a guilty verdict, and a fine of $100.

1940 : Prime Minister Neville Chamberlain is promising immediate co-operation between the armed forces following the German invasion of Norway under the leadership of The First Lord of the Admiralty Winston Churchill.

1951 : Fighting increased along the Israel-Syrian border with continued artillery, Mortar fire and Infantry attacks across the border between the two sides .

1960 : Princess Margaret married Antony Armstrong Jones in a royal wedding at Westminster Abbey many thousands lined the streets of London hoping to catch sight of the royal couple. This is the first time for 400 years that a daughter of a king has married a commoner.

1961 : Alan B. Shepard Jr became the first American in space today after soaring 115 miles above the earth in a spacecraft named Freedom 7.

1967 : The first ever all British satellite 'Ariel 3' is successfully launched into orbit from the United States. The satellite is to be used for a number of research projects for British Universities, Jodrell Bank and Meteorological Office. The satellite orbits the Earth every 95 minutes and will relay information back to a computer at Slough's Radio and Space Research Station.

1968 : Following the referendum in Gibraltar in which Gibraltar's voters were asked whether they wished to become part of Spain and voted with a resounding no vote. Spain closes the border with Gibraltar and severed all communication.

1980 : The siege of the Iranian embassy in London ends after raid by SAS commandos killing five Iranian gunmen and one arrested. Nineteen hostages are set free but one dies and two are injured in the cross-fire.

1981 : Thousands mourn the death of hunger striker Bobby Sands after 66 days of hunger strike in protest against members of the IRA not being treated as political prisoners.

1992 : Governor Bill Clinton continues to increase his run for the democratic nomination with 80% of delegates number needed to secure the democratic presidential nomination. Meanwhile Ross Perot running as an independent is edging closer in the polls to President Bush and Bill Clinton.

From our 1923 Ladies Fashions 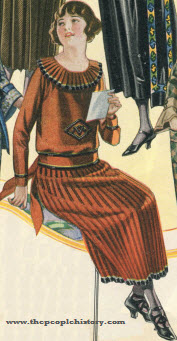 2007 : Hotel heiress Paris Hilton was sentenced to forty-five days in jail after violating her probation by driving without a license. The twenty-six year old celebrity was speeding with her headlights off on a suspended license after a previous drunken driving charge when she was caught by the police.

2008 : A roadside bomb was detonated in Grozny, Chechnya and five security forces in the Russian republic. The attack came before the inauguration of President Dmitry Medvedev.

2009 : Feminist icon Marilyn French died of heart failure at the age of seventy-nine in New York. The writer of "The Women's Room" had been working on a new novel and a memoir before her death.

2010 : The Cuban government agreed to let foreign companies to invest in tourism by developing golf courses and marinas, among other tourist industries. The move was made in order to boost the Cuban economy by attracting more affluent travelers with better facilities.

2011 : A French-team using deep-sea robots began to recover bodies from a 2009 Air France plane crash. The plane crashed in 2009 on its way from Rio de Janeiro to Paris and was carrying 228 people. Fifty-one bodies had been found on the ocean surface in 2009, but the remaining victims had not been recovered and officials stated they were not sure how many of the bodies they would actually be able to recover from the seabed crash site. The remains that were found were to be sent for DNA tests in France in hopes of identifying them.

2012 : Boris Johnson won his second term as London's mayor after a fairly close election against rival Ken Livingstone. Johnson only won by three percent of the vote.

2013 : Paul McCartney performed previously unperformed Beatles songs live for the first time at the opening night of his world tour. The Beatles stopped touring in 1966, meaning a lot of their songs had never been performed in front of live audiences. Some of the songs he performed included "Lovely Rita", "All Together Now", and "Your Mother Should Know". McCartney also sang "Eight Days A Week", making it the second time that song had been performed live.

Born This Day In History 5th May

Known For : Alexander Ragulin was a ten times world champion and three times Olympic champion ice hockey player for the Soviet Union. He played defense for the Red Army C.S.K.A. and scored 29 goals in 239 games for the Soviet team. He played the Khimik Voskresensk team between 1957 and 1962 before moving back to Moscow, where he played for the Red Army team. He retired in 1973.