Fashion and Accessories of the 1950's

The End of Rationing and the Beginning of Excess

During World War II and the 1940's, clothing was greatly influenced by rationing and limited quantities of fabrics, threads and needles, so the most popular look was a simple outfit using as little of these much in demand resources as possible. Once World War II and rationing ended, a new availability of different types of fabrics and larger quantities of these fabrics allowed a new type of fashion to bloom during the fifties, especially in the United States. Women's dresses in particular exploded with excess fabric, showing off intricate gatherings, a multitude of pleats, poofy petticoats, and fabulous collars, all made of the best taffeta, nylon, rayon, wool and leather in the brightest and boldest patterns and colors. The 1950's marked the beginning of one of the biggest economic booms in US history and spurred the rise of consumerism and American excess that has defined a lot of our culture in the US and worldwide for the past sixty years. Style Clothing became an important part of culture in the 1950s, with the country going through many societal and cultural changes. It would showcase one's place in society more so than ever before and became a way to express conformity and individual identity. 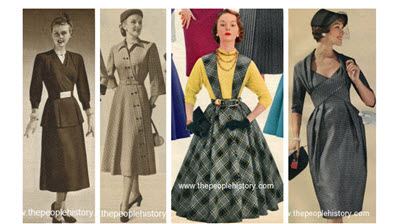 Because of the end of World War II and the economic boom, men were sent back to work in record numbers. This meant that two of the primary driving forces behind the consumerism of the 1950s were housewives and the baby boom. In nearly all of the department store catalogs used to compile this section on fashion of the 1950's marketing was geared towards women. Descriptions of clothing included subtle cues that certain clothing and fashionable looks would help women either please their husbands or help them find a husband. Even the descriptions of men's clothing indicated that women would most likely be choosing and purchasing the clothing for their husbands. There was also a certain way that women were expected to look.

Fashion started to emphasize conformity in the way people should look. Women were sold on a certain body shape that would best fit the latest fashions and that shape was a thin waist with defined hips and a larger but very defined and shapely bust. Compared to today's standards that feature extremely thin and very tall models, that image might seem more attainable and more natural for most women, but it still placed a lot of pressure on women and girls during the decade to conform to an idealized beauty standard. Corsets, controllers and bustiere tops were standard beauty fare and latex and nylon slimmers were heavily marketed towards women. Bras and bust paddings that helped achieve that defined and almost cone-like shape for busts were also in abundance. The choice and variety of clothing made in "stout" sizes and for older women also started to fade into the background.

Fifties fashion also helped to define a woman's place in society, especially for wives. Five different types of outfits began to emerge for women during the decade, each with a definite and rigid purpose. Women's clothing could for the first time be easily sorted into clothing for housework or lounging around the home, going out to run errands or conduct business, maternity wear, party-appropriate clothing for social gatherings, or, for women of a lower socio-economic station than the emerging middle class, work uniforms. These different styles were meant to impress and please others including husbands, neighbors, friends and employers, with much less emphasis on whether these fashions expressed the individual identity of the women who wore them. 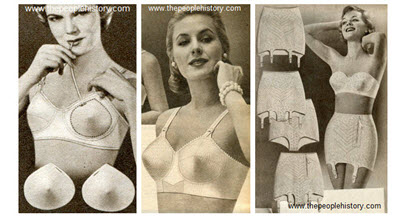 During the 1950's, style was used to set a common standard of look. This meant that not many choices of dramatically different styles were available throughout the decade. A lot of clothing was similar in shape and silhouette but varied in color, pattern or type of fabric. There was a prevalent expectation to match and keep up with neighbors and friends and to impress others with Matching outfits for whole families were popular, especially during the holidays or during vacations. Matching dresses for mothers and daughters as well as matching sister dresses were also some of the most remembered fashions of the decade.

For men, fashions changed very little throughout the decade. Choices were suits, sport coats, slacks, sweaters, or casual wear all in similar fabrics and styles. Occasionally bolder patterns might emerge for casual wear, but business clothing remained largely unchanged during the fifties. Work clothing for laborers was usually in the style of the military, because a majority of the men at the time had served in the armed forces or were still a part of the military. 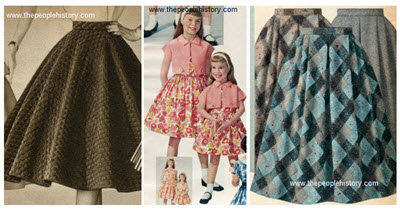 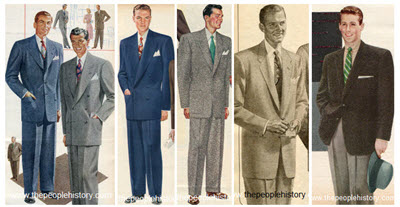 The Rise of Teenage Culture

Around the middle of the decade a separation between child and adult styles began and the gap was filled by teenage clothing. Resulting from the economic boom and baby boom coinciding, teenage style, culture, and consumerism became a major part of society for the first time in recent history. Teens started to get disposable income from parents and part-time jobs, they also started to gain more leisure time and that combination meant more shopping. Around 1955, we start to see that some of the biggest trends are targeted towards teenagers. Suddenly, whole departments and catalog sections are devoted to (mainly female) teenagers and young adults. At this point, teenage culture and clothing also became a larger part of television, movies and music.

With greater emphasis placed on one's teenage years, many formal fashions were also marketed to this age group as school dances and proms became an important part of the decade and have since been an integral part of teen life. While many of these formal fashions were available in both junior and adult sizes, judging by the styling and descriptions, these dresses were definitely meant to be worn while dancing in the decorated high school gym accompanied by your beau.

The Beginnings of Change

At the end of the 1950's, we start to see less conservative styles appear. Sexier silhouettes with tighter skirts, shirts and dresses start to show up for women. Rebellious looks for men also emerge with leather motorcycle jackets, studded boots, and bolder patterned shirts and sweaters becoming popular at the latter end of the decade. Girls and women start to get more clothing options in terms of pants and shorts with pedal pushers, Bermuda shorts, and tapered leggings featuring prominently in style trends.

Fashions from the fifties greatly showcased the mood of the decade and emphasized consumerism and conformity. Going into the 1960's, fashions started to reflect the upcoming diversity and individuality that would become the main focus behind the fashion revolution during the next decade. 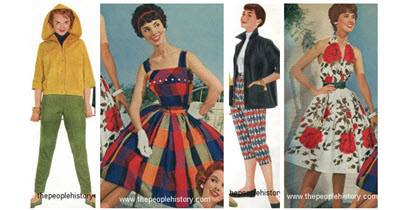 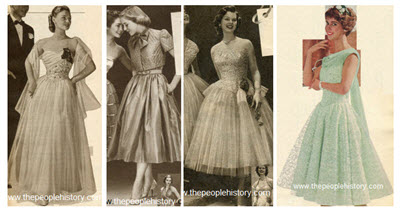