In the 1930s, home building was a practice that required careful planning. This practice was at least in part regulated by the Federal Housing Administration (F.H.A.). This particular federal organization is one that provided insured loan funding for home builders starting in the year 1934.

The major stipulation was that each home had to be built in a way that it would blend in with the rest of the homes in the surrounding neighborhood. The following is an example of the types of homes that were built during this decade:

Three Examples of homes from the Thirties 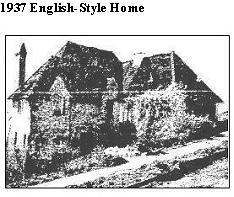 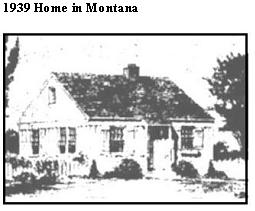 If a person, family, or investor were to receiving financing to buy a home the condition of the home itself would be a major consideration. This could also affect the likelihood that the home would sell as well.

The following are some of the criteria for selling or buying a home in the year 1939:

Sleeping rooms were to be designed to provide considerable amount of privacy for each household member. For example, each room might be required to have a door on it that closes.

Rooms during this time were required to be well-lit and properly ventilated. Bathrooms should be easily accessible to all members of the household. Kitchens of home should be designed in a way that makes eating, cooking, food storage, and dish washing easy. During this time there was to be adequate storage for blankets and linen, cleaning supplies and equipment, as well as space for clothes drying and/or laundry duties (and laundry facilities).

These homes included all the right furnishings, such as a foot stool appropriate for the corresponding chair that it would be used for. Other chairs in a home that stands during this decade would usually contain sitting chairs that are just the right height for a person to be comfortable.

Additionally, new trends for making home living more convenient included making sure end tables, lamps, and other furniture would be place in the most convenient location possible. This principle of making living simpler and easier could also be applied to the placing of bedroom furniture as well.

There is a good chance that people in the 1930s considered the proper positioning of bedroom furniture. Likewise, they shopped very carefully and planned the building of their homes very strategically in order to make sure that optimal placement of furniture and conveniences had their own place.

Proving convenient and comfortable living was becoming more important during this time. Furthermore, interior design was essential to making a home look more attractive, especially if it was being entered into a contest to win a prize.

In case you are wondering what the interior of a kitchen or living room space would have possibly looked like in the early 1930s you can view these photos below: 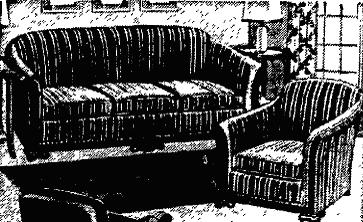 The above pictures represent concepts of photos taken from a 1931 Wisconsin Rapids Newspaper. Note however that F.H.A. involvement would have not taken place until the year 1934.

Note: Weather or not the F.H.A. has a positive effect on home improvement is a matter of personal opinion. The above picture is simply meant to display the difference between living room settings from early to late 1930s.

Over the years, home designs and furnishing displays have changed. Tastes in home decorating as well as popularity of home conveniences are continually evolving.

Those who were building or remodeling their homes in the 1930s would plan for making living easier. For instance, enclosed linen shelves were made to give families a place to store folded and/or pressed linen. In order for clothes sitting in linen shelves to be dust-proof these shelves were usually built with matched or beaded lumber, usually v-shaped.

Houses were made complete with the most up-to-date light fixtures of the times. If a home did not have these already, they could usually be made up-to-date fairly quickly.

For example, hanging shelves were also used during this time period, on which knick-knacks, decorative pottery, or books would sit.

In the 1930s, an electric fan was advertised in a Wisconsin Rapids, WI Newspaper. This was an item that was used quite often to cool homes in warmer weather. Apparently in the year 1931 electric appliances such as this or a coffee or tea pot could be set for a specific time to work while household members are out.

Picture of an Electric Fan Advertisement: 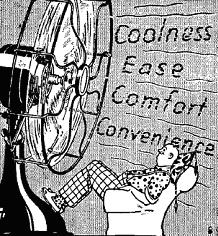 Sometimes a system called “forced air conditioning” also was installed in homes during this decade, especially in the late 1930s.

Photos of other Electrical Appliances from 1931:

Other electrical appliances that were made for the kitchen in the 1930s include electric ranges (instead of gas), electric washers, and electric ironers. You m ay want to pay particular attention to the vast improvements in cooking ranges and/or ovens from the early to late 1930s. 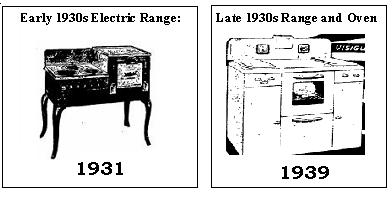 Additional Home Conveniences, Such as Running Water or Light

If homes in the 1930s were not always built with the latest in technology they soon would be. Professionals were regularly installing plumbing or light fixtures, water heaters, as well as new kitchen sinks.

Telephone extensions were also advertised quite a bit starting from the 1930s so that people could answer the phone in the kitchen instead of running to the other room to answer it. By the way, this is what telephones looked like back then. Take a look below.

Take a look at this “Good Finish Hardware” such as this piece below, which appears to be a doorknob and/or lock system for an outside door (most likely a front door). You will learn more about the character of homes when you view the photo of it.

Asbestos was used during this time until there was knowledge of its dangerously potential fatal affects. On a lighter note, some of the same brand names of paints that are used today have also been used back then, and linoleum tile floor coverings were a hit.

6 room cottage all improvements on 1/2 acre