Over 70 Years of Homes Styles and Furnishings

One of the ways to learn about the history of a particular location or time period is to study the changes in home styles. Likewise, you will find out quite a bit about a particular era when you read and study about different home furnishings that were popular during different times in history.
If you are studying about the differences in the styles of homes from the early 20th century to the present, you will want to learn what appliances and/or what fuels were used back then. This is all important for you to know as you continue to understand how people lived over the past 70 years.

Homes in earlier years were much simpler. They usually just included the rooms that a family needed, with not much extras. This is especially true for most people during World War I and World War II.
A 1928 a floor plan shows two bedrooms on one end of the home with a bathroom attached to at least one of them. Please see 1928 Sample Floor Plan Picture below: 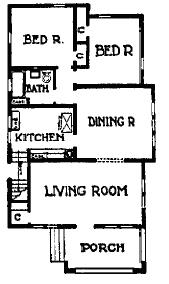 Of course, the exact layout of a home floor plan varied, depending upon what style of home was built during a specific time period. However, looking at the above picture you can get a feel for the simplicity of some of the earlier styles of average American family homes.
Another great example of a home floor plan from earlier times is the following example taken from a 1939 newspaper: 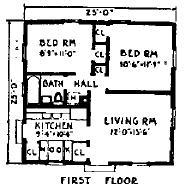 You may note that the 1939 is more of a square shape instead of the rectangle shape of the previous-displayed 1928 home plan. This is one of the simpler styles of homes that were built during the end of the 1930s, which was the beginning of World War II.
Another style of floor plan that was used in building homes in this time period is the one pictured below: 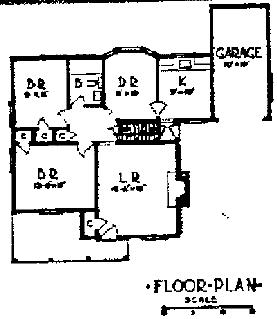 This is a floor plan of a Colonial/Cape-Cod architectural style home. This represents one of the more extravagant homes of this era, versus the more square-shaped home described above. Not everyone was able to afford a home of this size. From the 1940s to 1970s, newer inexpensive ways to built and remodel homes were explored.
Part of this effort is most likely a result of the formation of the Federal Housing Administration (F.H.A.), which is a federal organization founded in 1934. This particular facet of government was mean to help individuals and families receive money by way of insured loans to buy a house.
New materials did not mean lower-quality, however. Rather, newer ways to weather-proof homes were highly encouraged. Furthermore, the F.H.A. created standards for homebuilding in order to ensure that houses were constructed as carefully as possible.


Furnishings from 1920s to Present

In the first part of the 20th century usually more solid wood materials were used to create the structure of couches, dressers, cabinets, and so on. It’s that natural woods are not used today, but the expanded use of man-made materials (i.e. plastic, steel, aluminum, linoleum, carpet, vinyl) in the making of home furnishings has helped keep home decorating and building down.
A style of small furniture and décor has also changed over the years as well. For instance, fringed lamp shades were more popular in earlier decades than in more recent years. The following is a picture of lamps that were marketed in the 1920s: 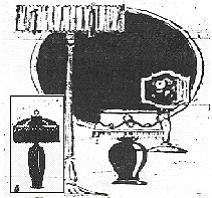 Home Interiors from 1920s to Present

From the 1920s to approximately the mid-1940s, hardwood flooring was more popular (or sometimes linoleum). Then, in later years then, during the late 1950s to the late 1970s, more contemporary interior designs were introduced.
For instance, wall-to-wall carpeting began to replace oak hardwood floors in homes more often after the 1940s, especially in living room areas. Additionally, a memorable change in fashions-especially during the 1960s and 1970s was the use of paneling and/or multi-colored print wall coverings-either that or paneling was used on walls. Ceramic tiling was often used in the bathrooms after this time period as well-and is still used today.
In the present time, a combination of the old and the new from the past and the present are used for home interior design. For instance, some homes are still built with hardwood floors in the living room, hall, and/or kitchen of a home to honor the classic antique style. Yet, these same homes also have carpeting installed in the bedrooms of the home.


Home Exteriors from 1920s to the Present

Most homes used to be sided with brick, shingles, or wood. However, in more recent decades, materials such as aluminum or vinyl, are used for siding. One of the most current materials used to build homes are ones built with cement fiber.
Another area of major change was the types of materials used for roofing. Some of the older roofs of homes were made from materials such as, vulcanite slabs (in 1920s), cedar wood, or asphalt.


Appliance Models from 1920s to Present

In the beginning of the 20th century up until approximately the end of the 1930s simpler forms of refrigeration were used in kitchens. People kept items cool in what was referred to as an “ice box”. Take a look at the picture of an ice box below: 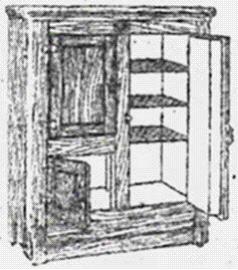 If you ever hear a senior citizen refer to a refrigerator as an ice box you can bet they may have been alive during the time when refrigerators did not run on electricity.
From the 1940s all the way up until the present day newer forms of appliances were invented as well. Electric ranges became an option for people, then dishwashers, garbage disposals, and microwaves were eventually a part of the newer homes that were built.
Kitchen appliances as well as the appliances in every room of the home have changed in style and performance since they were first invented. You can see the difference between various homes appliances that were installed in kitchens in early decades (1920s through the 1940s) and in later decades up to the present time. These photos are displayed on other pages of this site describing homes built during different decades.
We spend our working lives making a home for ourselves and our family, turning a house into a home to become a reflection of our personalities and the needs of our family is an integral part of Life.
The transformation of a house to a home involves everything you find in a home ranging from the colours we paint the rooms and the furniture we put inside, The changes we make to the garden or additions to house our families needs. Part of the essence for a home is our ability to feel comfortable and to make our guests feel comfortable, and the sounds of laughter or the smell of cooking all contribute to the feeling of warmth.
Many of our happiest memories come from times in our homes, both as a family and to see friends and family at ease and relaxed can create strong emotions for many years to come. When we sell our homes to move it is a stressful time not only due to the financial and planning needs but also as we close the door and hand over the keys we look back and many of the memories come flooding back, we are often left wondering if we can recreate those feelings at another house, the answer is yes if the love and care still exists we can create new memories in our new home.