What Happened in 1981 Important News and Events, Key Technology and Popular Culture

What happened in 1981 Major News Stories include The Aids Virus Identified, Iran Hostage Crisis Ends, Yorkshire Ripper is caught, Post It Notes launched, Riots UK Cities, Anwar Sadat assassinated. one of the most exciting was the First Flight of the Space Shuttle Columbia. This was also the first year that the Word Internet was mentioned and MS-DOS was released by Microsoft along with the first IBM PC. On the world stage the events that captured the imagination included Lady Diana Spencer marrying Charles The Prince of Wales. In Politics a little known group before Solidarity inspire popular protests and a general strike in Poland and the government in the UK starts the process of privatization of Nationalized Industries which is later followed by many other countries around the world.

More Information for the Charles and Diana Royal Wedding
The Royal Wedding of Prince Charles and Lady Diana Spencer took place during July of 1981. The wedding, held at St. Paul’s Cathedral in London, attracted crowds of more than 600,000 people to witness the historic event. 3,500 guests, many of them royalty or celebrities, attended the ceremony and an estimated 750 million people, worldwide, watched it on television. The Royal Wedding drew the public’s interest in such an extreme way partially due to Lady Diana Spencer’s attractiveness and charm as well as the perception that Diana and Charles’ relationship was a modern fairy tale.

More Information and Timeline for the Venera 13 Spacecraft
The Venera 13 Spacecraft is launched by the USSR on October 30th, 1981. Venera 13 was created, along with the identical Venera 14 spacecraft, as two-part spacecrafts. One part was the lander that would be dropped to the surface of Venus to conduct experiments and the other was the bus that would carry the landers and relay data between the landers and Earth as well as conducting other experiments. The Venera 13 spacecraft reached Venus on March 1, 1982 and successfully deposited its lander. Once on the surface of Venus it took the first panoramic color photos of the landscape and drilled into the surface of the planet to take a sample. The spacecraft also studied cosmic gamma-ray bursts. The craft stopped communicating results in March of 1983.

1. The military leaders of Poland declare a state of emergency and place the nation under martial law during December of 1981.
2. The government arrested the leaders of the Solidarity trade union who had been making progress in what was described as a peaceful revolution up to that point.
3. The move cut off the Polish people from the rest of the world and imposed curfews.
4. The United States responded by placing economic sanctions on the country.
5. The authoritarian-led government claimed that the crackdown was necessary to prevent a civil war, but it was more likely used as a means to crush political opposition coming from the Solidarity movement.
6. Martial law was kept in place until July of 1983 and many of the political prisoners were not released until 1986.

1. President Ronald Reagan appointed Sandra Day O'Connor to the US Supreme Court on July 7th.
2. The confirmation hearing was held at the beginning of September and by the end of the month the US Senate voted in favor of adding her to the court with a 99-0 vote (one Senator was absent).
3. Sandra Day O’Connor became the first female justice on the United States Supreme Court on September 25th. Her votes and opinions while on the court cast her as a moderate conservative.
4. She had previously held positions as an Arizona state senator (1969 - 1975), Superior Court judge for Maricopa County (1975 - 1979), and a judge on the Arizona Court of Appeals (1979 - 1981).
5. She announced that she would retire on July 1st of 2005.
6. She was replaced by Justice Samuel Alito in January 31st of 2006.

More Information for Raiders of the Lost Ark
The popular film “Raiders of the Lost Ark” makes its debut in theaters throughout the United States during June of 1981. The comedy-driven action/adventure film, created by Steven Spielberg and George Lucas, was the first to feature the character of Indiana Jones. Jones, portrayed by actor Harrison Ford, was a cavalier archaeology professor intent on protecting the world’s most precious artifacts, was an instant favorite of moviegoers. Raiders of the Lost Ark became the highest grossing film of 1981 and remains one of the most popular and highest grossing film of all time.

More Information and Timeline for the Pope Assassination Attempt
On May 13th of 1981, Pope John Paul II was shot by would-be assassin Mehment Ali Agca. The Pope survived the attack but sustained gunshot wounds to his left hand, right arm, and abdomen. Agca’s motive for the attempted assassination was unknown although at one point he suggested that the KGB and the country of Bulgaria were behind it. In July of 1981 he was sentenced to prison for life in Italy. Soon after the shooting Pope John Paul II publicly stated that he had already forgiven Agca. In 2010, Agca was released from prison. Agca was a Turkish national who had been previously convicted of the murder of a journalist in 1979 but had escaped his incarceration.

The first DeLorean DMC-12 futuristic sports car were produced on January 21st. Known for its distinctive gull-wing doors and stainless steel body panels, the vehicle garnered a lot of attention for its unusual look. It was designed by Giorgetto Giugiaro who had also designed cars for major companies including Alfa Romeo, BMW, Fiat, and Maserati, throughout his career. The DeLorean was only manufactured for two years and about 9,000 vehicles were produced in total. The company quickly ran into financial troubles and its founder, John DeLorean, was charged with conspiracy to smuggle drugs. The DeLorean was most well-known for being featured as the time travel machine used in the popular 1985 film “Back to the Future.”

More Information for the first London Marathon
The first London Marathon is held in March of 1981. About 7,000 people participated in the first marathon with 6,255 participants completing the 26 mile race. It was created by former Olympians Chris Brasher and John Disley with the intention to raise money for charity. Thousands of spectators gathered along the route of the first race to cheer on the participants, and since it began it has been held during the spring every year, continuing to grow in size and popularity. The first winners were Dick Beardsley and Inge Simonsen for the men, crossing the finish line together, and Joyce Smith for the women.

More Information and Timeline for Mozart's undiscovered symphony.
In February of 1981 it is announced that the Bavarian State Library in Germany had acquired a previously unknown piece of music written by famed composer Wolfgang Amadeus Mozart. The piece of music was described as a three-movement symphony in F-Major that had been composed by Mozart at the age of nine while he had been living in London in 1765. The library stated that they had found the symphony in a bundle of 107 manuscripts that had been purchased from an anonymous seller for about $300,000. They also announced that a concert would be held to perform it. 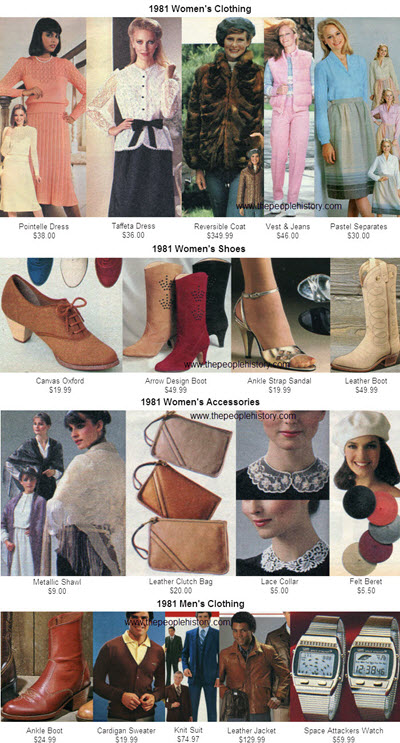 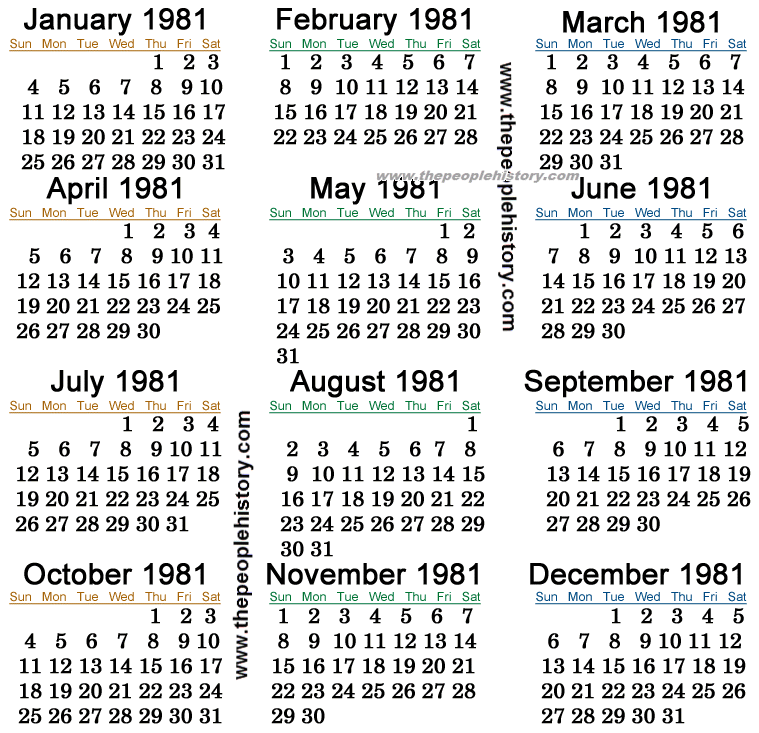 Part of our Collection of Toys From 1981 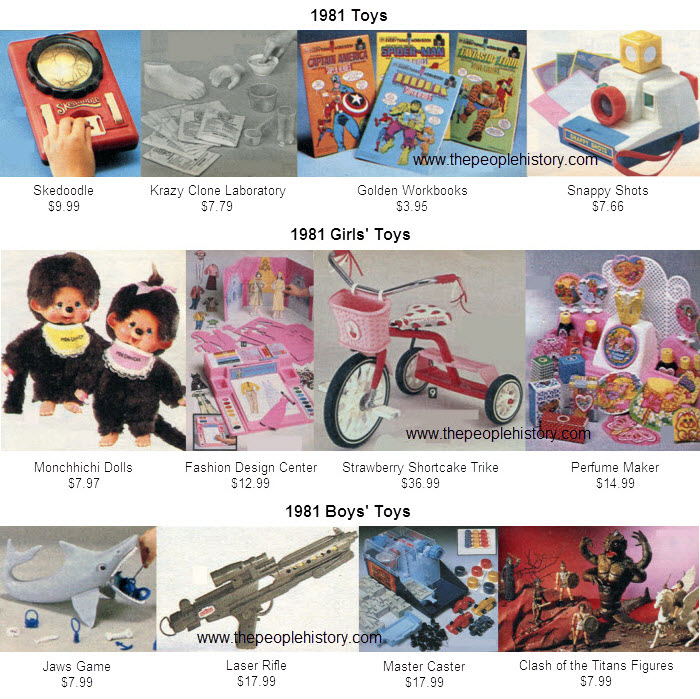 More News and Key Events From 1981