What Happened in 1924 Important News and Events, Key Technology and Popular Culture

Ellis Island closes as an immigration entry point to the US.

1. The first Ellis Island immigration station opens on the island January 1st, 1892. The first immigrant processed there is Annie Moore from Ireland.

2. The Main Building is opened on December 17th of 1900. It was not large enough to accommodate the influx of immigrants prior to World War I.

3. In 1907, Ellis Island experiences its record year in terms of the number of immigrants entering the United States through this point. There were 1,004,756 immigrants who went through the station in this year, and the highest number in one day was 11,747 on April 17th, 1907.

4. During World War I, the US Navy takes over Ellis Island to use as a way station. Most of the people received are sick or injured soldiers with a sharp decline in immigration during the war years.

5. The Emergency Quota Act passed in 1921 begins to curtail the number of immigrants allowed into the country, and Ellis Island sees a decrease in traffic.

6. The Immigration Act of 1924 is passed and sharply cuts the number of immigrants allowed into the United States. Ellis Island changes from being an entry point into the country to being a detention and deportation point for illegal aliens and those who violated terms of admittance. It starts to go into disuse.

7. The center is used for detention of alien enemies during World War II and sees a burst of activity as a detention center during the late 1930s through to the early 1950's.

8. In November of 1954, Ellis Island and its thirty-three structures are officially closed.

The Wrigley Building in Chicago, Illinois, United States is completed.

2. Built as the headquarters for the successful Wrigley Gum Company.

5. Walkways between the towers added at the ground level and the third floor.

6. North tower 21 floors were completed in May .

2. By 1921 he had been named as the assistant director of the Bureau of Investigation. He was only 29 years old when he was appointed head of the United States' top law enforcement agency and was in charge for a record 48 years.

3. Hoover gains a reputation as a tough leader who has strict morals when he makes efforts to take down the gangsters in the 1930's. The name is changed to the Federal Bureau of Investigation in 1935.

4. In the 1940s and 1950s he pointed FBI efforts at subverting Nazi and Communist spies.

5. By the 1960s and 1960s, he took interest in investigating members of the Civil Rights movement, protesters, and refocused efforts against organized crime.

6. J. Edgar Hoover died in 1972 while still head of the FBI. Hoover had been responsible for making the FBI a respected and important agency. He emphasized education and morality for his agents and enforced strict professionalism. On the other side of that coin, Hoover was also known for having a great hold on important figures and leaders of the time who respected his crime fighting efforts but also feared him, and despite his morality, Hoover was not an incorruptible man.

More Information and Timeline for the 1st Round the World Flight

1. Four planes, the Seattle, Boston, New Orleans, and Chicago, with a total of eight crew members take off from Seattle, Washington to attempt the first round-the-world flight on April 6th,

2. The Seattle crashes into Alaskan mountains on April 30th, and is unable to continue the journey. The crew were uninjured.

3. On August 3rd, the Boston was forced to land at sea over the Atlantic ocean and the plane was lost.

4. Once the remaining planes the Chicago and New Orleans land in Nova Scotia, they are joined by a prototype plane that was renamed as the Boston II and the three planes complete the journey over the United States together.

5. The two original planes, the Chicago and New Orleans complete the over 26,000 mile trip in 175 days and return to Seattle, Washington on September 28th, joined by the crew of the Boston in the Boston II.

The first Winter Olympics, held in Chamonix, France, came to an end during February . Known as the I Olympic Winter Games, they featured a total of 16 different events participated in by 258 athletes from 16 countries. Norway won the most medals with a total of 17 and Finland came in second with 11 medals. Some of the events including bobsleigh, ice hockey, speed skating, figure skating, and cross-country skiing. These games were the first in Olympic history where the host country did not win a single gold medal.

Astronomer Edwin Hubble concludes that the Andromeda Nebula is actually a Galaxy.

In December famed astronomer Edwin Hubble announces that after conducting some research on the Andromeda Nebula he has determined that it was a galaxy and not actually a nebula. This discovery presented the first evidence that there were other galaxies in the universe outside of the Milky Way. Hubble continued his research and discovered over twenty other galaxies in his lifetime. Hubble went on to influence space research even more in 1929 when he published a paper that would lead to the scientific conclusion that the universe was ever-expanding and that his research could be used to determine the age of the universe. Hubble remained one of the most influential scientists in the early 20th century up until his death in 1953.

Lt. Russell L. Maughan completes the first daylight hours transcontinental flight in June. This was his third attempt at a dawn-to-dusk flight across the North American continent and it was completed with an actual flight time of 18 hours and 20 minutes (total transit time was about 21 hours). Maughan took off from Mitchel Field in Long Island, New York and he landed at Crissy Field in San Francisco, California. Throughout the flight he made several pre-planned stops to refuel in Dayton, Ohio; Saint Joseph, Missouri; North Platte, Nebraska; and Salduro Siding, Utah. His flight speed averaged 128.37 miles per hour. 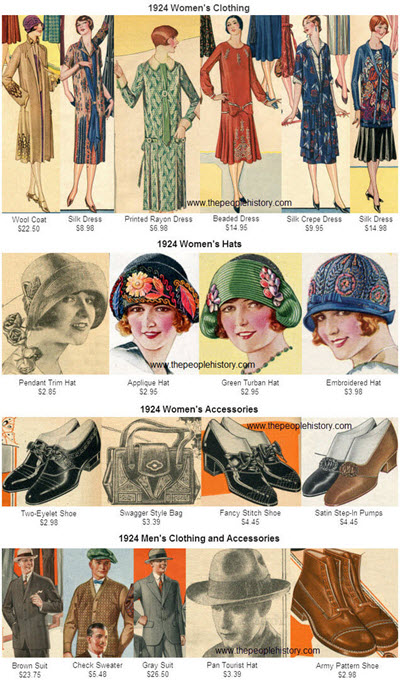 The IBM corporation was founded.

The Indian Citizenship Act passed on June 2nd which confers citizenship on all Native Americans born within the United States.

The Indian Citizenship Act is signed into law by President Coolidge on June 2nd . The purpose of the law was to grant US citizenship to Native Americans born on US soil and those who had not already become citizens in other ways.

The act gave citizenship to about 125,000 Native Americans. It made it so that indigenous people did not have to give up tribal citizenship or apply for US citizenship.

Many Native Americans still did not receive full citizenship rights through this law and many were still unable to vote until about 1948.

The Dawes Plan on German reparations is accepted by Germany.

After World War I, the US and British governments formed a committee headed by Charles G. Dawes to create a report on how to structure reparations to be paid by Germany as the presumed instigators of the war.

The plan allows for Germany to make smaller payments at first that would then increase over time as their economy grew stronger. It also placed strict controls and foreign supervision over the German economy and introduced a new German currency.

Germany accepted the Dawes plan on August 16th, and it helped to stabilize the country over the short-term after the war.

Ira Gershwin, George Gershwin and Irvine Berlin continue to dominate the music industry and Rhapsody in Blue is played for the very first time.

More Information and Timeline for the 1924 Paris Olympics

1. The Paris Summer Olympic Games came to a close on July 27. These Olympic Games began on May 4th, and were the first of the modern games to have a broad appeal.

2. The number of countries participating in these Olympics grew in a dramatic fashion and these games were widely covered by the world's press.

4. These were also the games in which Eric Liddell and Harold Abrahams, who the movie "Chariots of Fire" was based on, would run the 400m and 100m respectively to win gold medals.

Willem Einthoven wins the Nobel Prize in Physiology or Medicine for the electrocardiogram.

Dutch physiologist Willem Einthoven is awarded the Nobel Prize in Physiology or Medicine in October . Einthoven had created his string galvanometer in 1901, an improved instrument to measure the heart in a refined and detailed manner. By 1903 he had created his electrocardiogram. Einthoven continued to improve his machine and conduct research with it. He was awarded the Nobel Prize for his dedication to research surrounding the electrocardiogram and his improved version of the groundbreaking medical instrument. Modern electrocardiograms have improved greatly, but they are still rooted in Einthoven's research and techniques. 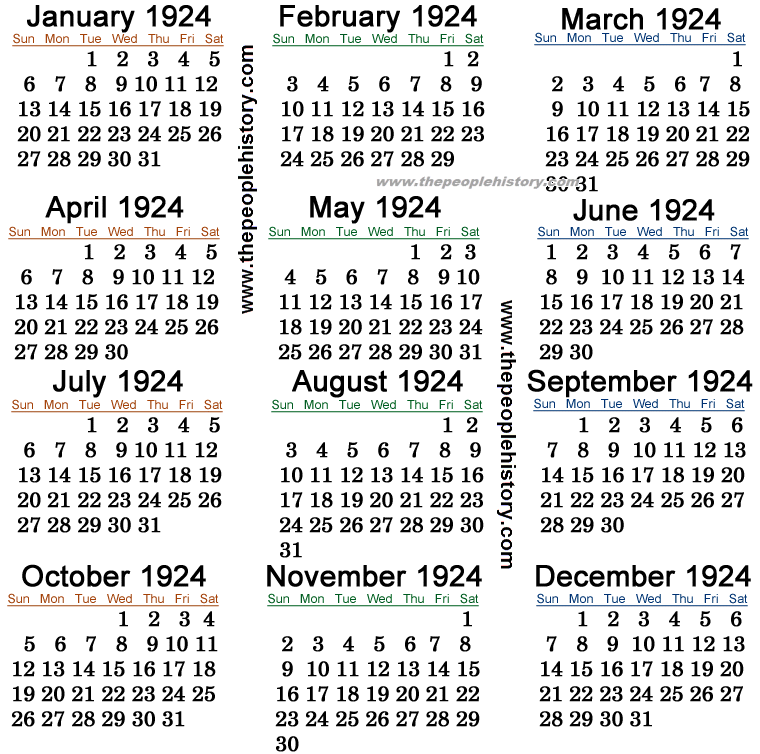 The first regular airmail services start in the USA.

Hoof and Mouth epidemic in California.

The First ever Winter Olympic games are held in Chamonix, France.